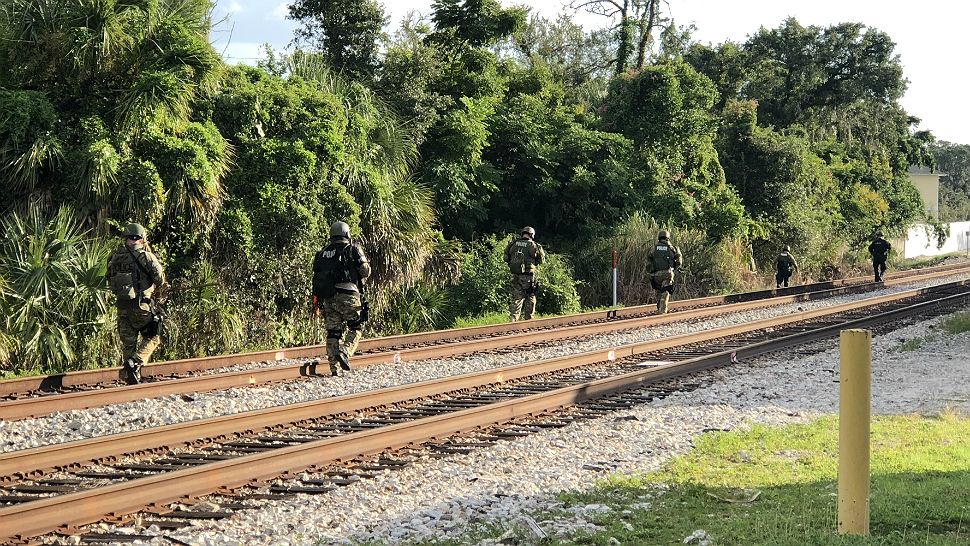 1 of 2
Search for shooting suspect
Winter Park Police had parts of Fairbanks and North Orange Avenue shut down as they searched the railroad tracks for a shooting suspect.
(Bailey Myers, staff)

2 of 2
Search for shooting suspect
Winter Park Police block North Orange Avenue in front of Rollins College's Alfond Stadium (seen at right) on Monday afternoon after a report of a shooting near the campus. Students at the college were urged to shelter in place.
(Sky 13)

Breaking: we just heard what sounded like gun shots near N Orange Ave where Winter Park police are searching for a suspect by the name of Jerad Vasquez- very active scene details coming up on @MyNews13 pic.twitter.com/eprz2ErKFy

Authorities believe Vasquez was hiding in a search area next to the Rollins College Stadium for the duration of the manhunt.

Officers say they took him into custody after a brief exchange of gunfire. No one was hurt, and the suspect was arrested without injury.

Winter Park Police said officers responded to the 900 block of Orange Avenue after a report of a shooting. Officers were seen blocking North Orange Avenue in front of Alfond Stadium.

#breaking
➡ @WinterParkPD is looking for a light-skinned man with a handgun
➡ Wearing grey shirt and long black shorts
➡ Wanted in connection to N. Orange Ave. shooting
➡ If you see suspect, do not approach, call 911
MORE: https://t.co/3z9oOjP6KP pic.twitter.com/bUBLoZfXW4

Vasquez allegedly fired a shot from a handgun along the busy roadway and struck someone.

Winter Park Fire transported one person suffering from a gunshot wound from the area of Orange Avenue and Denning Drive to Orlando Regional Medical Center, it said.

Now, law enforcement is sifting through evidence trying to piece together why the alleged shooting happened.

Correction on the first name. The suspect is Jerad Christopher Vasquez.

People were urged to avoid the area of North Orange Avenue and Fairbanks.

Students at Rollins College were told to shelter in place Monday afternoon after a shooting was reported near campus. The lockdown has since been lifted.

Happening Now: Winter Park Police have parts of Fairbanks and N Orange shut down as they search the railroad tracks- I am asking for more details about why and who they are searching for now @MyNews13 pic.twitter.com/eTOyrIs7MM