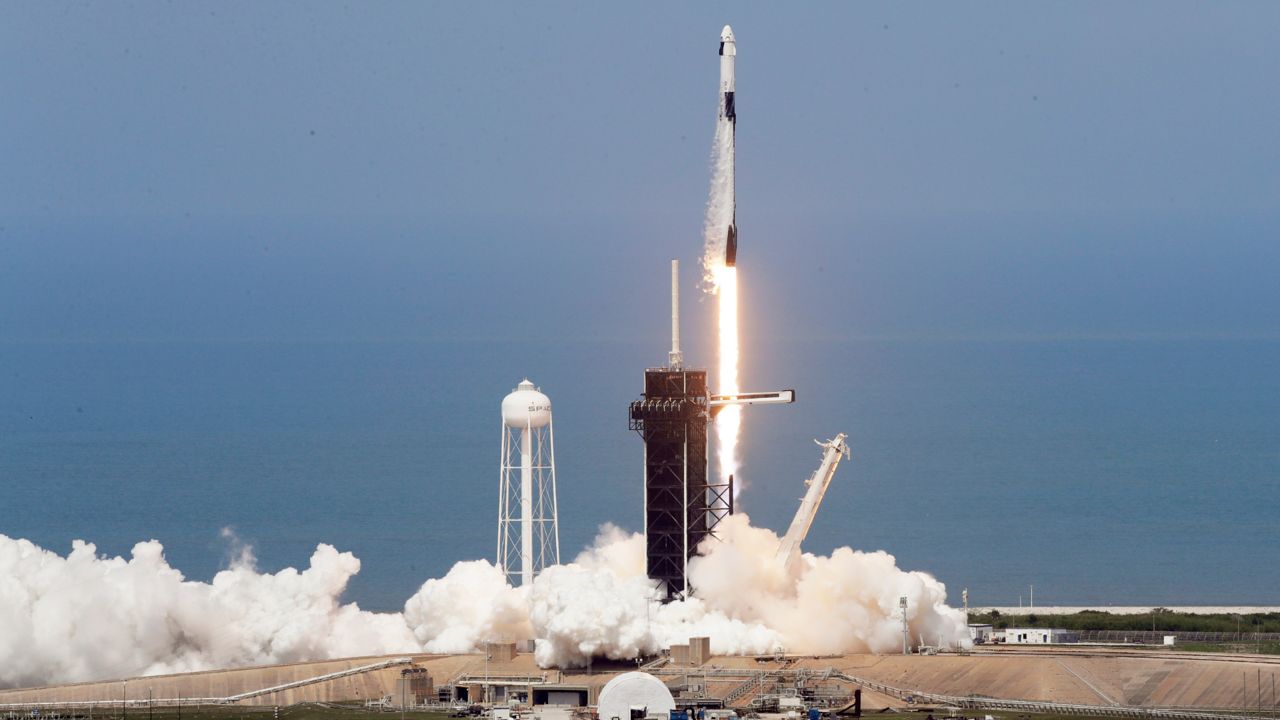 A SpaceX Falcon 9 rocket lifts off from Launch Complex 39A at Kennedy Space Center on Saturday, carrying a capsule with NASA astronauts Bob Behnken and Doug Hurley on a mission to the International Space Station. (David J. Philip/AP)

KENNEDY SPACE CENTER, Fla. — With a break in the weather, two astronauts lifted off from Kennedy Space Center aboard an American-made rocket Saturday, ending a nearly decade-long drought of crewed missions from the U.S.


The SpaceX "Demo-2" mission is sending Bob Behnken and Doug Hurley to the International Space Station from U.S. soil for the first time since the sunset of the space shuttle program in 2011.

It's also the first time a commercial company has successfully launch a crew into space.

As a nation gripped by the coronavirus pandemic watches with hope, NASA is framing this mission to be a beacon of optimism for the U.S. that will chart a new path for future space missions.

LIFTOFF! 🚀 @NASA astronauts @astrobehnken & @astro_doug are headed to the @ISS! The pair launched from @NASAKennedy aboard a @SpaceX rocket and capsule moments ago, marking the 1st time in nearly 10 years astronauts have blasted off from US soil: https://t.co/qI7QODqgDD pic.twitter.com/mRfDPqGvq9

"As we know, there is a lot of suffering in the world right now, and we hope to give 'hope' with this flight," NASA Deputy Administrator James Morhard said at Kennedy Space Center in Florida on Friday.

Here is a recap of today’s @SpaceX launch of the #CrewDragon capsule.

Behnken and Hurley soared into the atmosphere at 3:22 p.m. EDT from Launch Complex 39A, the same pad where shuttle and Apollo moon missions lifted off. Cheers erupted from huge crowds that had gathered up and down Florida's Space Coast as the rocket headed into the sky.

“I bought a one-way ticket because I’ve been to launches before and I knew that it could get scrubbed a couple times, so I wasn’t heading back till I got to see it launch," spectator Barry Hamilton said.

Poor weather threatened Saturday's liftoff, as it did with Wednesday's first attempt. On that try, the astronauts, strapped in their seats, were just minutes from liftoff when flight controllers decided to stand down due to the threat of bad weather. Lightning and thunder frequently forced crews indoors, and a brief tornado warning even threatened the surrounding area.

Both President Donald Trump and Vice President Mike Pence returned Saturday to witness the event, with Trump's Air Force One arriving at Kennedy Space Center at about 2:30 p.m. EDT. NASA said it marked the first time a sitting president and vice president had come to see a launch.

The last time astronauts launched from the U.S. on a mission to the ISS was shuttle mission STS-135 in 2011, in which Atlantis docked with the ISS. Since then, NASA has had to rely on Russian rockets to get its astronauts to the station.

SpaceX took the early lead in private space development from Boeing when it successfully launched, docked, and returned an uncrewed Crew Dragon in March 2019. Development of Boeing's crew capsule, the Starliner, was set back in December 2019, when a test flight that was supposed to deliver supplies to the ISS went awry. The capsule never made it into the proper orbit, and NASA said Boeing must fly another uncrewed Starliner mission before astronauts can climb aboard.

Now, NASA hopes this SpaceX Demo-2 mission is the start of a new space race of private companies advancing the American space program. It's serving as a validation test for SpaceX to convince NASA that the company has met all of the agency’s certifications and standards.

Docking between the Crew Dragon capsule and the ISS is scheduled for 10:29 a.m. EDT Sunday.

While on the space station, joint operations commander Behnken and spacecraft commander Hurley and the rest of the ISS crew will perform tests on the Crew Dragon capsule and other research. The pair could be on board the station anywhere between one to four months.

When they do come home, Behnken and Hurley will board the capsule, which will re-enter the atmosphere and splash down off Florida’s Atlantic Coast. Behnken, Hurley and the Crew Dragon will be picked up by SpaceX’s recovery ship and return to Cape Canaveral.

About 10 minutes after liftoff Saturday, the Falcon 9's first-stage booster landed on SpaceX's drone ship hundreds of miles in the Atlantic. When feasible, the company tries to recover the booster and reuse it for future launches, cutting down costs.

If all goes well with Demo-2, SpaceX will move ahead with a "Crew-1" mission, targeted for August, which the company hopes will lead to NASA missions on a regular basis.