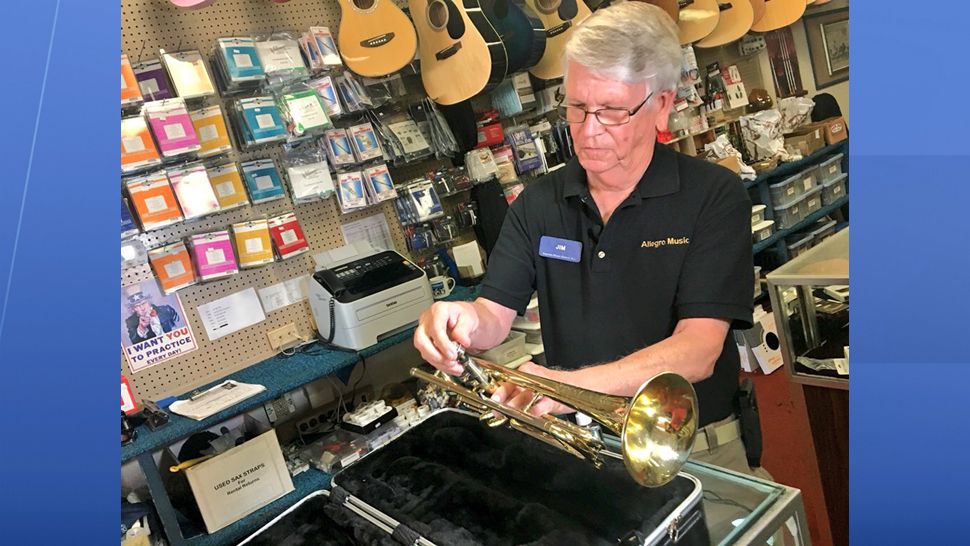 1 of 4
"I didn't do that for any recognition. I just did that because it was the right thing to do," said Jim Jones, owner of the music store Allegro Music Centre. (Spectrum News 13) 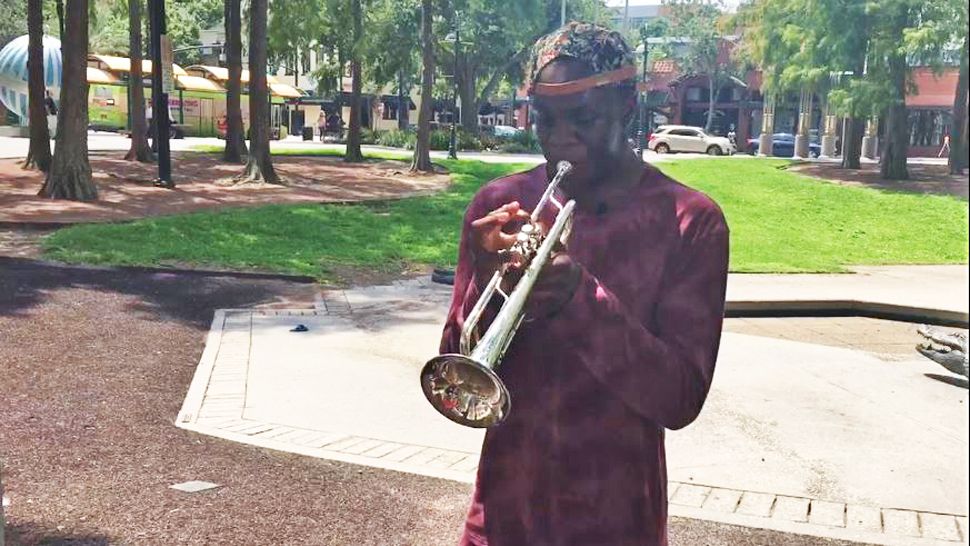 2 of 4
Jacques Ruffin did not know when he was in middle school, and only discovered upon finding a crumpled letter in the back of his childhood home, is that his mother fell behind on payments for the instrument and music store owner Jim Jones forgave the debt. (Spectrum News 13) 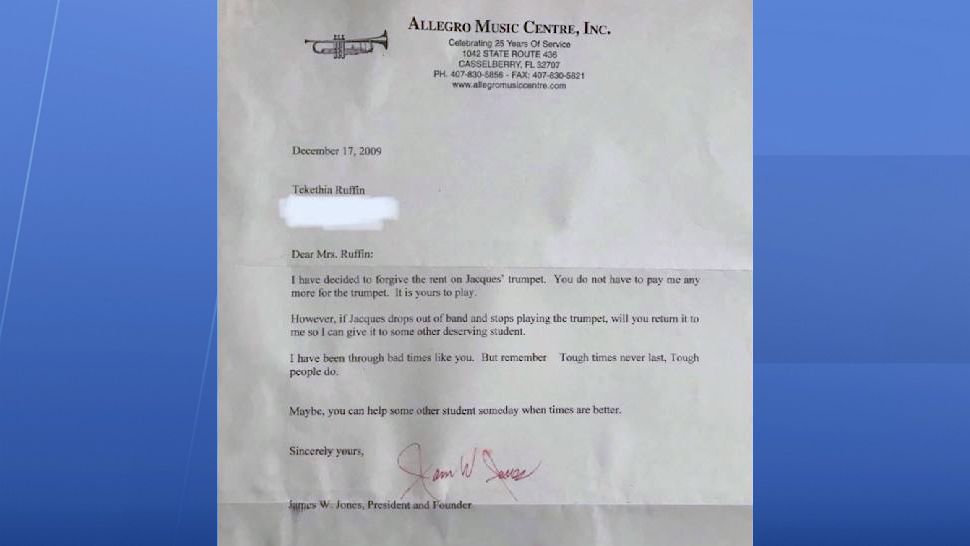 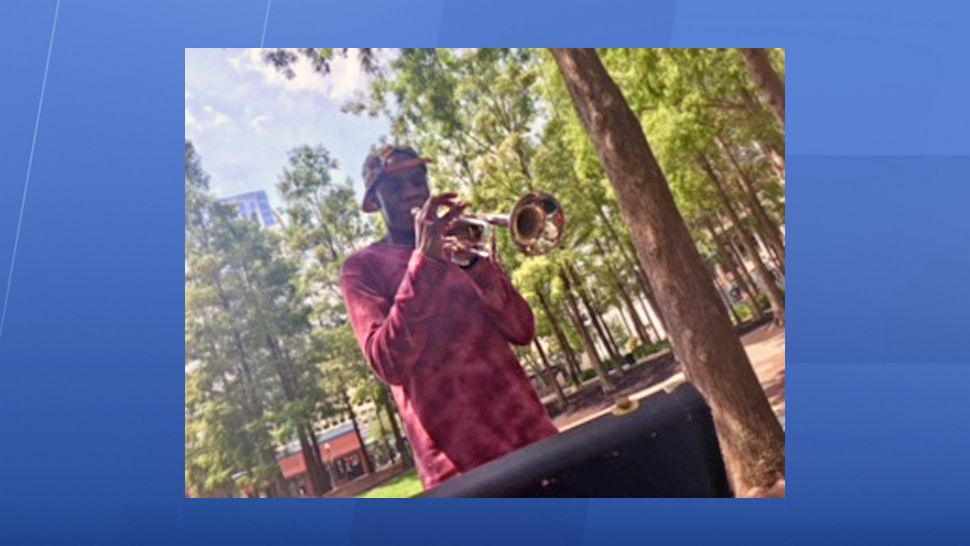 4 of 4
Jacques Ruffin was in middle school in 2009 when he decided to pursue the trumpet. (Spectrum News 13)

CASSELBERRY, Fla. -- It was a kind gesture that struck a chord not only with a young trumpet player, but with people around the world.

And it is something one Everyday Hero has done this many times over.

"His small deed. He didn't know that changed my life," said Jacques Ruffin. "Him doing that one small act of kindness. It probably was nothing to him but I wanted him to know that meant everything to me."

In 2009, Ruffin was in middle school and decided to pursue the trumpet. What he did not know at the time, and only discovered upon finding a crumpled letter in the back of his childhood home, is that his mother fell behind on payments for the instrument and music store owner Jim Jones forgave the debt.

"I didn't know at the time she was struggling to make payments. She never told me anything," said Ruffin.

"I see benefits that the kids have in music," said Jones, who owns Allegro Music Centre in Casselberry. "I've been doing it for a long time, helping people get instruments for a long time."

Jones started the store in 1983, after initially opening up shop downtown. The full line music store sells pianos, guitars; they also offer lessons and boast a huge rental program to dozens of schools in Seminole and Orange counties.

It was a dream of the former band director to have his own store, sharing his love of music with others, especially students.

"My goal is for them to have fun with it," he said. "It teaches you things about life, like discipline of it."

Jones, himself, started playing the trumpet in the fifth grade, rounding out his repertoire with piano, guitar and other instruments.

However, the teacher knows that not all students have access to instruments. So, when he noticed Ruffin's mother, Tekethia Ruffin, was falling behind in payments, he gave her a call.

"She said, 'Mr. Jones, I've lost my job. My husband's taken off for Alabama. I'm sick,'" he recalled her saying on the phone.

So, Jones wrote a letter, allowing the woman to keep her son's trumpet, with a caveat: If Jacques Ruffins should ever stop playing, return the trumpet so another deserving student could have access.

"I have been through bad times like you. But remember. Tough times never last, Tough people do," he wrote.

That line was especially impactful for Jacques Ruffin, tearing up as he found the old note. A few weeks ago, he posted the letter on Reddit and it went viral, racking up votes and comments.

Ruffin was so inspired by the act and the response online, he started his own GoFundMe to connect students with instruments.

Now 21, Ruffin's studying economics at a college in South Dakota. But, he never dropped out of the band, in middle or high school, and continues to enjoy the trumpet to this day.

Though the instrument is now old, missing keys thanks to precocious siblings, Ruffin said that he is forever grateful to Jones for his generosity and fostering his love of music.

"All those memories I created over the years would be nonexistent," Ruffin added. "Music is one of my passions. I said it's one of the things I live and breathe is music. I would never trade that experience for anything in the world."

Jones said his kind act was just the right thing to do.

"I didn't do that for any recognition. I just did that because it was the right thing to do," said Jones.

Jones hopes others who hear the story donate their old instruments to children in need.

"An instrument is the first thing that kids run into that doesn't automatically play itself," he said.

When told that Ruffin called him a hero, Jones was silent for a moment before responding quietly, "Well, I'm humbled."

The GoFundMe page listed above is not managed by Spectrum News. For more information on how the site works and the rules, visit http://www.gofundme.com/safety.