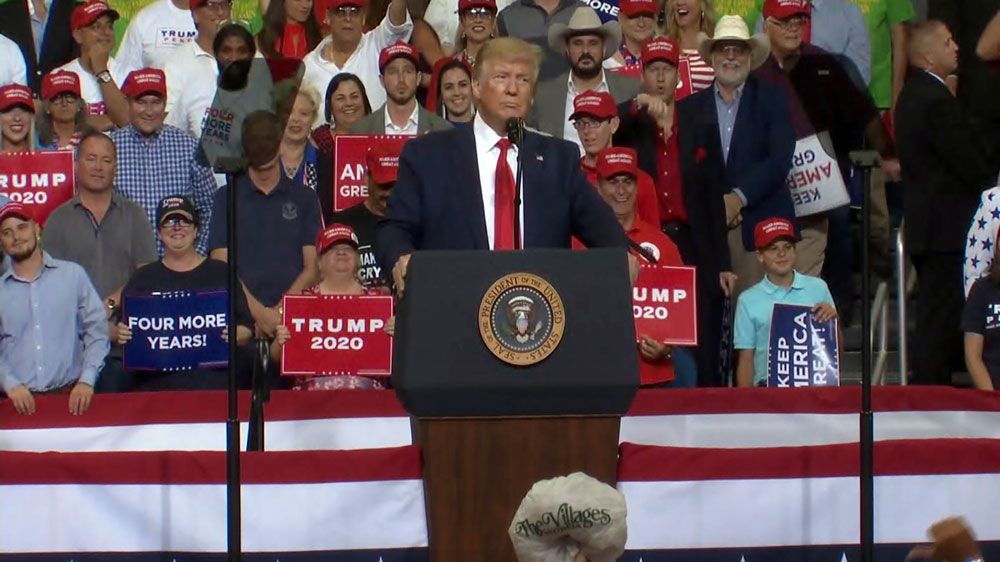 1 of 9
President Donald Trump tells a mostly-full Amway Center crowd Tuesday night that he's been tough on Russia and that the left wants to "radicalize our judiciary." (Spectrum News) 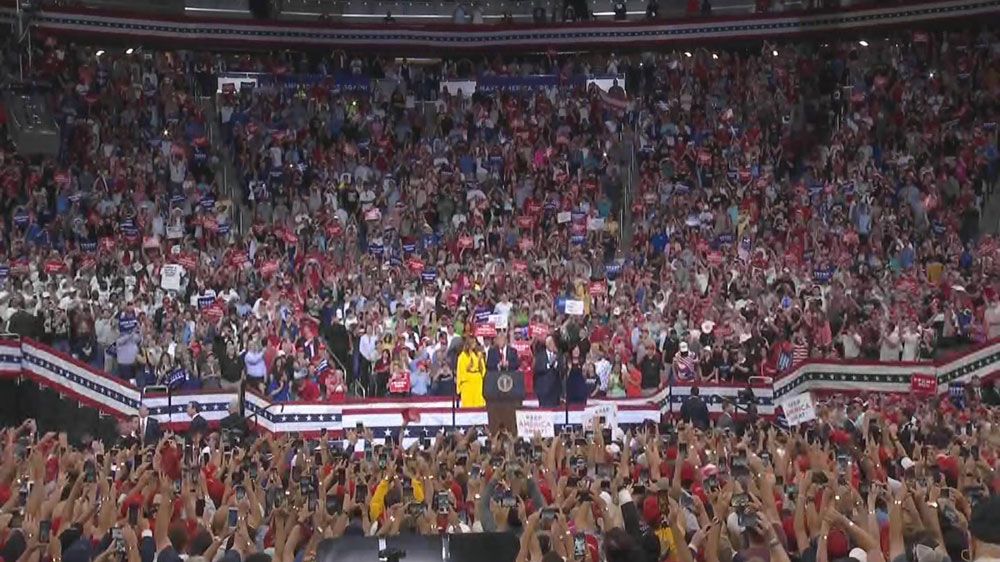 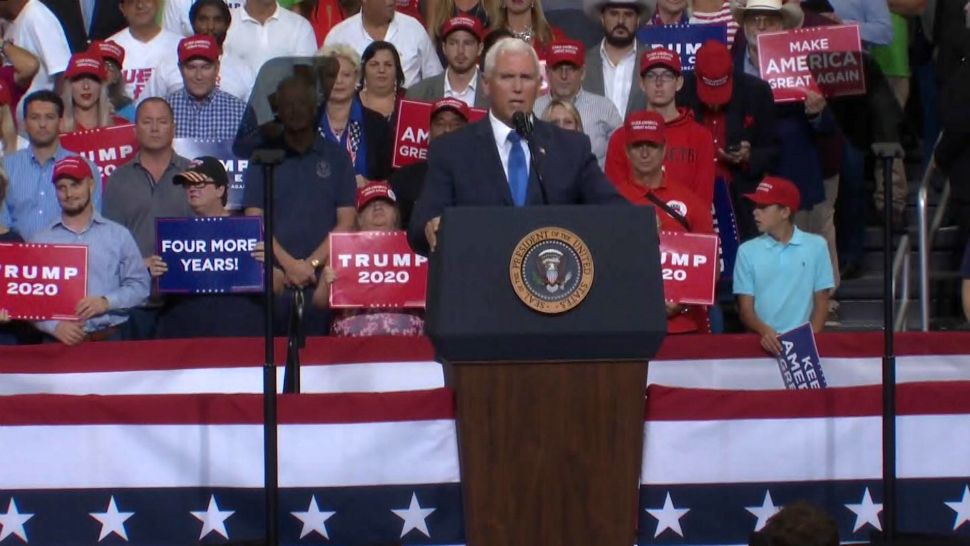 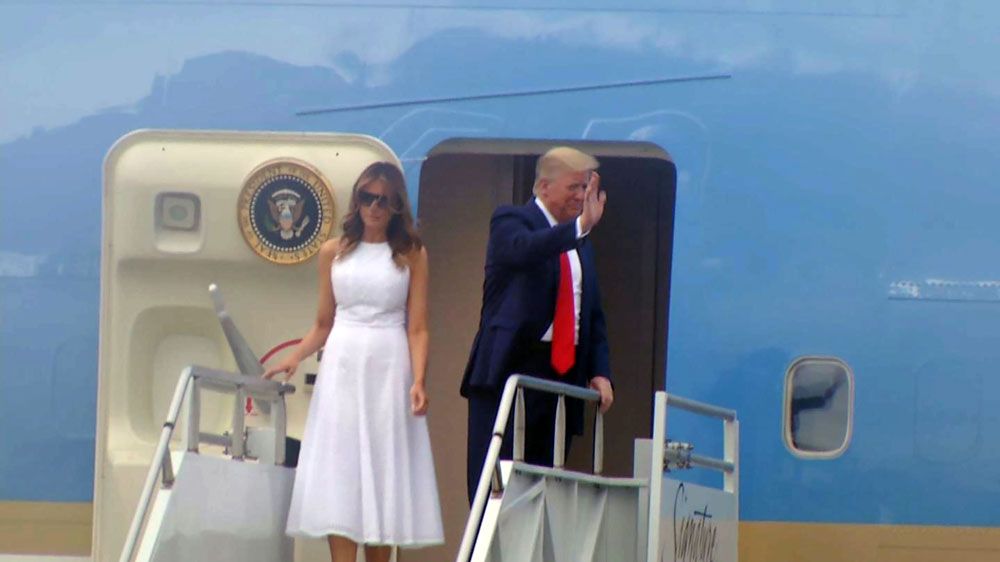 4 of 9
President Donald Trump and first lady Melania Trump wave from Air Force One moments after arriving at Orlando International Airport early Tuesday evening ahead of a campaign rally at the Amway Center. (Spectrum News) 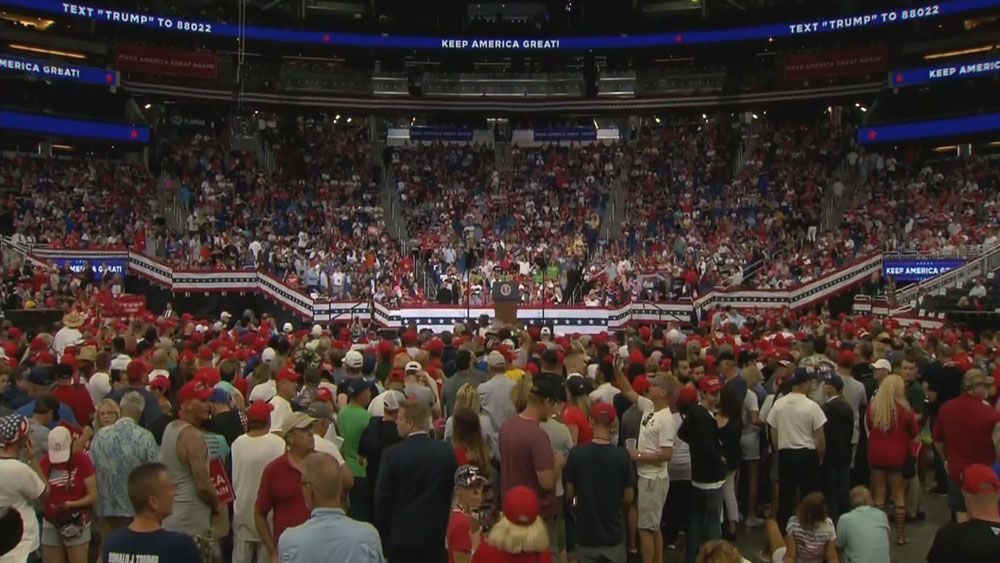 5 of 9
Supporters of President Donald Trump have poured into the Amway Center in downtown Orlando ahead of an appearance by the president Tuesday night. Vice President Mike Pence as well as the president's son, Donald Trump Jr., were expected to take the stage. (Spectrum News) 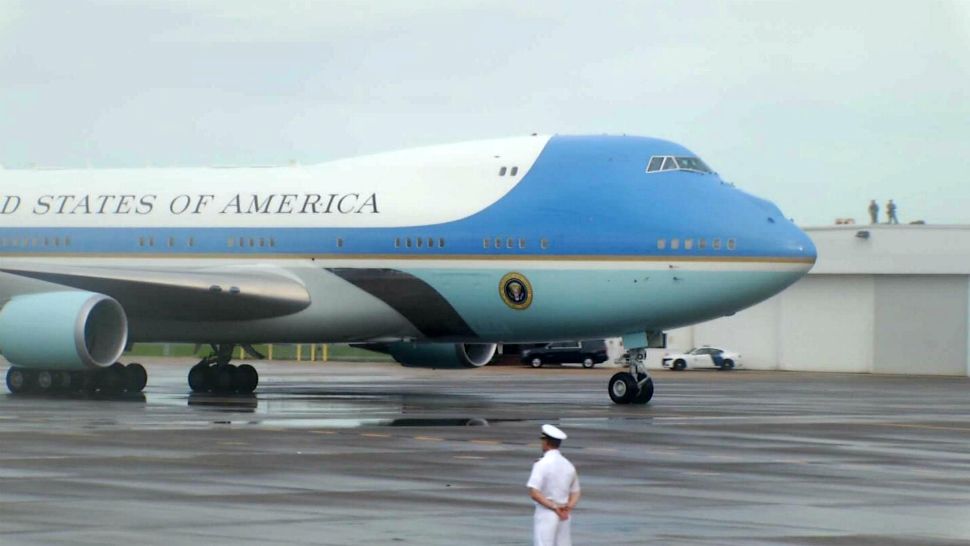 6 of 9
Air Force One, with President Donald Trump and first lady Melania Trump aboard, arrives at Orlando International Airport early Tuesday evening ahead of a campaign rally at the Amway Center. (Spectrum News) 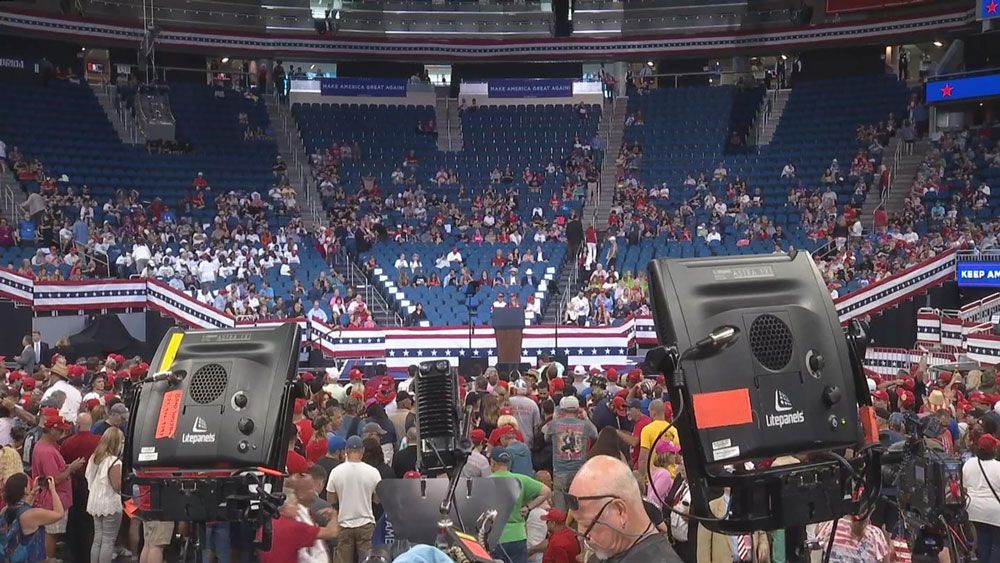 7 of 9
Supporters of President Donald Trump are finding seats inside the Amway Center in Orlando on Tuesday afternoon. The president is expected to formally kick off his re-election campaign tonight. (Spectrum News) 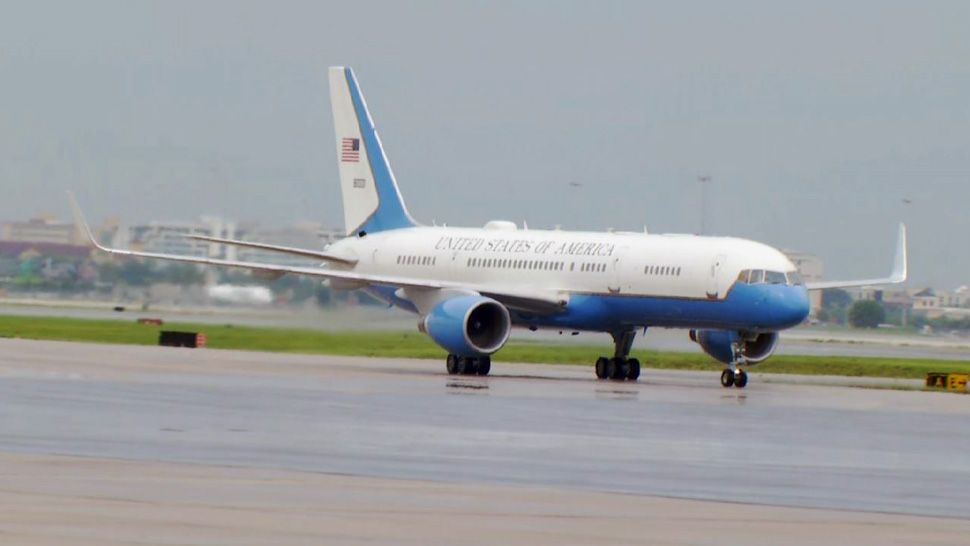 8 of 9
Air Force Two arrives at Orlando International Airport just after 3 p.m. Tuesday ahead of a re-election rally for President Donald Trump at the Amway Center in downtown Orlando. (Spectrum News) 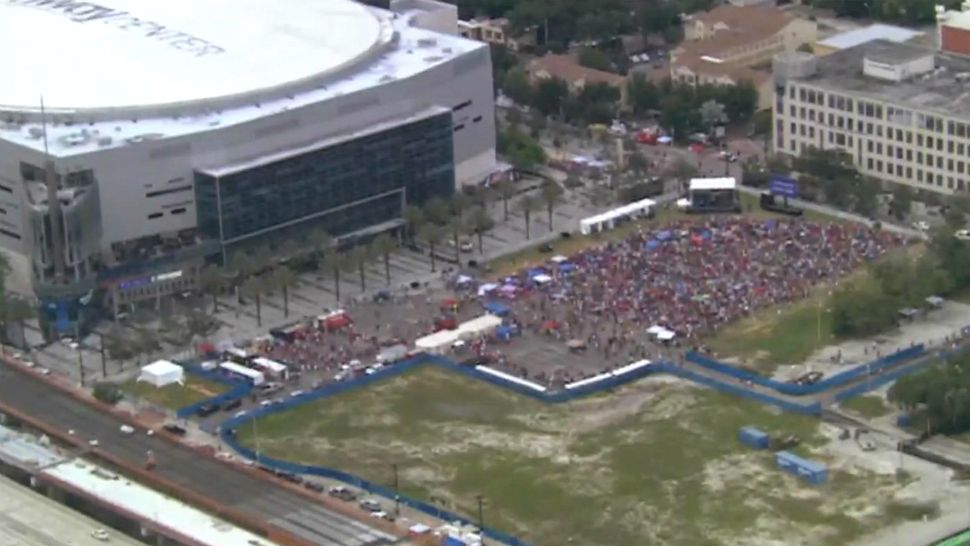 9 of 9
A large crowd celebrates in front of the Amway Center on Tuesday afternoon ahead of President Donald Trump's campaign event in the evening. (Sky 13)

ORLANDO, Fla. — Amid a raucous crowd in what he called "MAGA country," President Donald Trump formally announced his campaign for a second term as president during a rally Tuesday evening at the Amway Center.

President Donald Trump wraps up his re-election kickoff event by saying that America will "never be socialist."

He's headed back to Orlando International Airport, where he'll depart for South Florida. He's scheduled to host a fundraising event there Wednesday.

In brief remarks on stage, she says her experience has been "truly the honor of a lifetime... I had a chance to be on the front row of history."

She tweeted during the flight aboard Air Force One to Orlando that this would be her last trip as White House press secretary.

President Donald Trump is asking the crowd at Amway Center whether they like "Keep America Great" as a campaign slogan.

VIDEO: President Trump wrapped up his rally in Orlando with a speech that catered to his base and promised an aggressive re-election campaign with a new slogan his voters seemed to approve of. COMPLETE COVERAGE: https://t.co/14oZlOIHS7 pic.twitter.com/wvq3bCs8aG

The crowd erupts and stomps, and he says, "My ears will never be the same."

"We are going to keep it better than ever before," Trump says.

"That's why I stand before you to officially launch my campaign for a second term as president of the United States."

"Orlando, what a turnout!" President Donald Trump says after taking the podium at Amway Center.

He came out a few minutes before with first lady Melania Trump and was greeted on stage by Vice President Mike Pence and second lady Karen Pence.

"My second home... is the great state of Florida," Trump says.

To wild cheers, he says Trump has made unprecedented efforts to secure our southern border.

Pence also touts the country's low unemployment rate, saying, "More Americans are working today than ever before" thanks to Trump.

A couple of protesters have been arrested on Church Street, near Amway Center. Spectrum News reporter Eric Mock says there was some shoving between two parties, and Orlando Police stepped in.

As President Donald Trump arrives at the Amway Center, his son, Donald Trump Jr. is energizing the crowd inside.

He rails on the "fake news media" and critizes Democrat Joe Biden's campaign pitch to invest in a cancer cure.

President Donald Trump and first lady Melania Trump, aboard Air Force One, have touched down at Orlando International Airport.

VIDEO: Air Force One has landed and the president and first lady are on their way to #TrumprallyOrlando at the Amway Center. Follow complete coverage of the rally on our website and on Spectrum News 13: https://t.co/14oZlOIHS7 pic.twitter.com/D27GsjE7gB

Trump's motorcade will transport him along main roadways in Orlando to Amway Center.

Motorists should anticipate delays — there will be rolling roadblocks as the president makes his way to and from the rally.

While en route to OIA, Sarah Huckabee Sanders tweeted that this would be her last trip as White House press secretary.

Hundreds are waiting in line, hoping to get into the Amway Center tonight for Trump's rally. But if they can't, there's a jumbo screen set up for them outside at "45 Fest," a festival right outside featuring live entertainment and food.

Donald Trump Jr. made an appearance earlier, addressing the crowds waiting to get in, getting them fired up for tonight's rally.

People have left behind items at the 45 Fest grounds — hundreds of empty camping chairs are out as people abandoned them hoping to get a good seat inside the Amway Center.

President Donald Trump and first lady Melania Trump waved to the press as they boarded Air Force One in the Washington area, headed to Orlando.

Accompanying him on the jet: Sens. Lindsey Graham and Marco Rubio, plus Dan Scavino and Sarah Huckabee Sanders.

But for at least part of the day, some restaurant managers said business wasn't what they expected.

Monica McCown says since Artisan's Table moved to its new location on West Church Street a few months ago.

Thousands of Trump supporters are expected to bring business to downtown Orlando - but tonight on @MyNews13 - why some #Orlando restaurant managers say lunchtime business was SLOWER today than usual. pic.twitter.com/ryxv0BELDR

"It’s one of the biggest draws we’ve seen on Church Street since we’ve moved here," she said.

Expecting thousands of people to walk past their doors, McCown beefed up staffing Tuesday.

"We staffed a little bit extra, we staffed like we would for any normal big event at the Amway Center, so we fully staffed the restaurant in case we get a good amount of visitors," McCown said.

But for the lunch hour, business was slow.

"I would say our normal business crowd is not really in today. Usually we’re really really busy right now, but right now we’re not very busy."

Managers at several other downtown Orlando restaurants told us the same thing: Their usual lunchtime business crowd seemed to stay away from the area for the day.

Some offices even closed early. Fairwinds Credit Union's downtown branch, which is near the Amway Center, closed at 2 p.m. in anticipation of road closures and potentially heavy traffic.

Elsewhere downtown, some bars and restaurants along Orange Avenue tried to make up for lost lunch-hour business by welcoming in Trump supporters, one playing off the president’s campaign slogan with a sign reading, “Make America Party Again.”

"I think a lot of people will start arriving later this afternoon, so we’ll be here. We’ll be ready for people if they come."

At an anti-Trump rally taking place blocks from the Amway Center, there were reports that Orlando Police beefed up security because some members of a group called the Proud Boys had shown up and wanted inside.

But law enforcement officers said their response was preplanned.

Behind police lines, a steady stream of people arrived with anti-Trump signs. Some expressed being insulted that President Donald Trump decided to kick off his re-election campaign in Orlando, saying he is anti-immigrant and encouraging state lawmakers to pass anti-abortion legislation.

Musical entertainment was set to kick off soon, with speakers taking the microphone at about 6 p.m.

Pence was coming from Miami, where he toured the USNS Comfort, a U.S. Navy hospital ship.

The arrivals of the vice president and president at OIA are closed to the public and airport employees. Trump and Pence and their crews will be greeted by a few dignitaries before heading to Amway Center.

The Secret Service has confirmed that at least one person was armed outside the Amway Center. In a statement, the agency said "the individual was in compliance with state/local laws."

Heavy heavy rain and lightning are above the downtown Orlando area, where thousands are expected at the Amway Center for a the Trump rally tonight.

A main concern is security. Orlando Police police patrol vehicles are parked up and down the streets near the arena.

Security is a big priority for @OrlandoPolice at this #TrumpRallyOrlando there’s officers all over and also you can see here a huge procession of bike deputies from @OrangeCoSheriff a lot of agencies here teaming up. @MyNews13 pic.twitter.com/eT2vmob9RI

Orlando Police Chief Orlando Rolon stressed that the force will have extra resources on site to help with the crowds, including riot and crowd control officers, but they won’t be deployed unless needed.

"We'll have that contingency, those officers who have a specialty dealing with crowd control," Rolon said. "If it rises to the level where they’re needed, you may see them come into the picture, but for the most part, we’re going to treat the event just as any other mass gathering."

Rolon said most of the department's officers will be in plain clothes for this event. He said they’re going to be using many of the same precautions they would use for any other large-scale event, although he declined to share specifics on many of their procedures.

In front of the arena, hundreds are enjoying 45 Fest, a celebration including merchandise vendors, live music, and food, until doors open at 4 p.m. ET.

Some arrived at the Amway Center as early as 5 a.m. Monday to be first in line, hoping to be front and center when Trump takes the stage at 8 p.m.

These supporters from Wisconsin and Minnesota try to get front row at all of Pres. @realDonaldTrump’s rallies. They got here 24 hours ago to be first at the Orlando re-election kickoff rally tonight. @MyNews13 @BN9 pic.twitter.com/WVzYavNIOJ

There were supporters from across the nation, including New York, California, North Carolina, Minnesota.

With 504 days until Election Day, they said they were ready to help Trump get another term in the White House.

"We looked at hotels like a week ago. By the time we thought about it, everybody had thought ahead of us; everybody booked all the hotel rooms. ... I was on the ground for a while then I decided to break out the lawn chair," said Hannah Barrow of Titusville.

A sea of umbrellas as temperatures soar at the 45 Fest, ahead of the #TrumpRallyOrlando tonight pic.twitter.com/c1U81rj3Mt

Michael Maffucci of Queens, New York, said he's been on an adrenaline rush since Monday afternoon.

"I got here at 3 p.m., rained at 3:30 p.m., got drenched, got dry, bought new merch," Maffucci said. "I've just been awake the whole time, running on adrenaline, and excitement, so excited for this."

For those who didn't arrive early, it's possible they won't make it inside the Amway Center, which seats 20,000. But they'll be able to watch Trump, Vice President Mike Pence, and several other guest speakers on the big screen.

Fans and airport workers won't be allowed to see the president or Pence after they arrive at OIA. When Trump arrives, he will be greeted by Gov. Ron DeSantis and his wife, Casey, along with airport officials. After getting off their planes, Trump and Pence will go right to their motorcades to head to Amway Center.

Supporters are being kept in this fenced-in area with vendors and music until they’re allowed inside the @AmwayCenter for #TrumpRallyOrlando. pic.twitter.com/WOkfqmiQQl