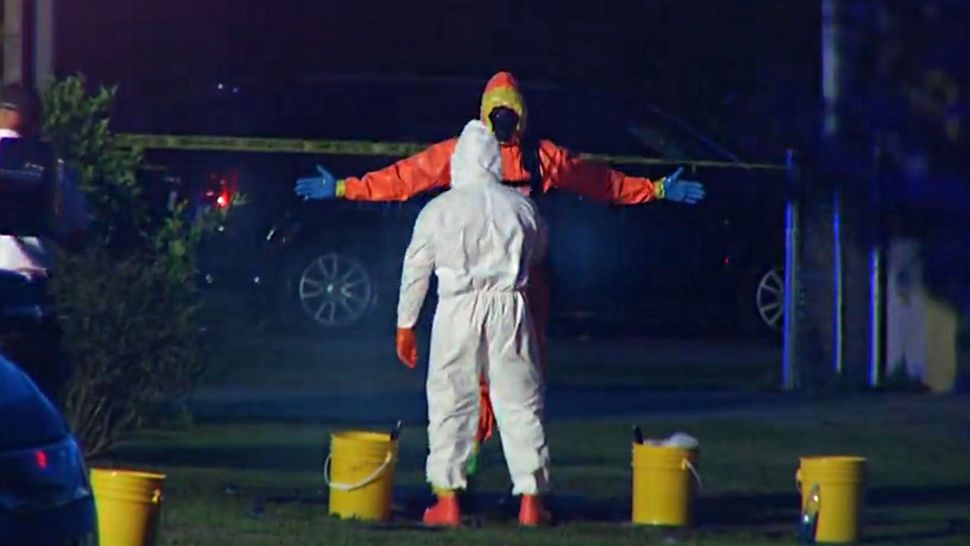 First responders getting decontaminated after a Lake County deputy, two firefighters, and a suspect had possible exposure to fentanyl during a traffic stop Tuesday afternoon. (Ken Ashlin/Spectrum News Staff)

Lake Deputy, Firefighter May Have Been Sickened by Airborne Fentanyl

CLERMONT, Fla. — A Sheriff's deputy and a firefighter have been discharged from a hospital after what officials think may be the first time in Lake County history that a deputy was exposed to fentanyl and passed out.

It happened during a traffic stop Tuesday afternoon on Florida Boys Ranch Road near County Road 561 in Clermont.

A Lake County Sheriff's deputy pulled over a van with three people in it. During the stop, the deputy said he found narcotics.

Then he began to pass out. He was revived by another deputy with Narcan — a drug increasingly issued to law enforcement to counteract the life-threatening effects of an opioid overdose.

When Fire Rescue arrived on the scene, two firefighters also reported feeling ill, and one of them was also given Narcan.

Everything from the van to first responders in Hazmat suits to the van occupants themselves had to be decontaminated, because authorities think they could have been exposed to fentanyl. The powerful synthetic opioid is almost 50 times stronger than heroin and can be absorbed through the skin or accidentally inhaled, according to the Drug Enforcement Administration.

The incident was a wake-up call for the department.

"Our detectives carry it. Pretty much everyone in the Sheriff's Office carries it," Lake County Sheriff's Sgt. Fred Jones said Wednesday.

Fentanyl become such a problem that in 2017, the Sheriff's Office received a grant that paid for a large supply of Narcan. Deputies say that in Tuesday night's incident, the substance may have been airborne.

"What typically happens on some traffic stops, the person trying to hide drugs, their hands are everywhere, and that's what we think activated the fentanyl in the air," Jones said.

Dr. Peter Springer, Volusia County's Emergency Medical Administration director, has seen it happen before. It's a situation that is becoming all too common — and can be deadly.

"It certainly can go airborne. Often times that's how the first responders get the toxicity from it," Springer said. "The danger is that it's so potent. It's 100 times more powerful than morphine."

There were two women in the car and, for whatever reason, they weren't affected by the drug like the deputy and firefighter. Stephanie Martin, 29, and 36-year-old Rebecca Wagner were taken to jail and made a first appearance in front of a judge Wednesday.

One man in the van, 30-year-old Brennan Dowling, also complained of feeling ill and was taken to a hospital. He was released and chose not to attend his first appearance.

As for the deputy who went to a hospital, officials said Wednesday was his normal day off, and he's ready to go back to work.