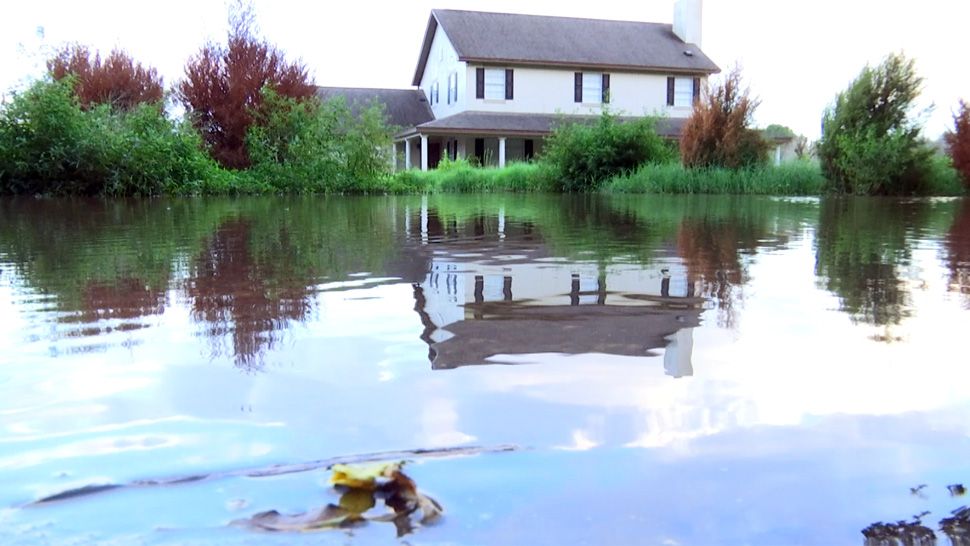 Duke Energy has been working to find a solution to the problem since it was alerted to it Thursday. The power company is going to replace the transformer and place the new one higher, out of the water. (Eric Mock/Spectrum News 13)

GOTHA, Fla. — Flooding issues in Orange County's Gotha community have been a concern for weeks, but residents didn't know it posed an imminent danger until they found out that a power transformer was submerged.

Mery Fernandez and her husband ask themselves tough questions as they survey their flooded property.

"What if we can't come back? I didn't think about that," Fernandez said.

Their house on Lake Nally Woods Drive, now flooded, was supposed to be "the one."

"(It was) our dream retirement home, because we were going to live here forever. We were never going to sell this house," she said.

However, a new danger has surfaced on top of everything they have lost: A transformer outside their home has been under water for months.

Nobody realizing the danger until now.

"It's been a nightmare. Every day, it's something new that's popped up," said Fernandez's neighbor, Stacey DeHart.

DeHart and her family have been going through the same scenario at their home. They have all walked in and out of the floodwaters over the past few months not knowing the potential risk of electric shock.

Duke Energy has been working to find a solution to the problem since it was alerted to it Thursday. The power company is going to replace the transformer and place the new one higher, out of the water.

However, Duke had to cut power to do that, which means the pumps in Fernandez's home will stop working and the water inside most likely will rise.

"With the power going out, it's done, it's done. It's like watching the Titanic just kind of sink," Fernandez said.

Fernandez says she is upset no one from Orange County or anywhere else told them before about the electrical danger. However, from her experience dealing with the county on this issue, she is not surprised.

"They're not going to care about our safety, that's the last thing," she said.

County leaders say they have been working to figure out who is actually responsible for the mess.

"Who's responsible is another story, but right now, we need relief. We need homeowners to be able to repair if it is possible," DeHart said.

Despite the possibility of losing everything, Fernandez says she is not giving up on their dream home just yet.

"I'm not a quitter. Everything's possible. It's just if the county doesn't work with us, that's where it will hit me really hard," Fernandez said.

Spectrum News 13 has asked Orange County officials several times what they plan to do to remedy this issue, but county officials say they need to study the issue more to understand exactly where all this water is coming from.