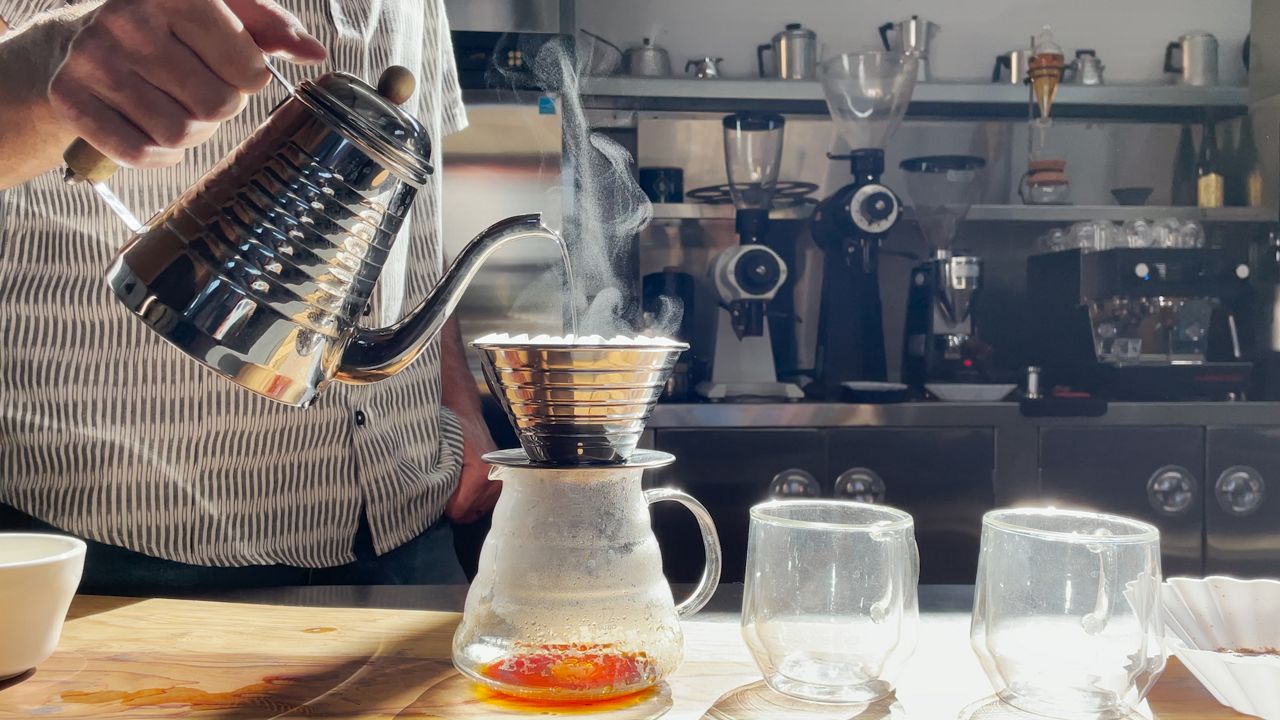 SANTA BARBARA, Calif. — At Good Land Organics in Goleta, between miles of dragon fruit and avocado trees, are hundreds of coffee trees. For owner Jay Ruskey, this was an experiment that began over 20 years ago.

Coffee had never been cultivated so far away from the equator before, and it’s not an easy crop to grow. Today, that experiment has turned into Frinj Coffee, a sustainable agricultural model that pioneers California-grown coffee.

“I think California should be as known for fine coffee as it is for wine,” Ruskey said. “I wouldn’t be here and I wouldn’t form Frinj if I didn’t think it was possible to make some of the best coffees here.”

The question of how to produce good quality coffee can be answered in looking at the sustainability of the crop. In recent decades, climate change and monocultured coffee crops are threatening the stability (and therefore, quality) in the traditional growing regions around the world — places like Central and South America — making coffee production increasingly taxing on the environment, and expensive.

Ruskey saw the solution to this worsening problem right here in Southern California, where pockets of our landscape provide the perfect climate for coffee trees. After many years of trial and error on Good Land Organics, Ruskey came up with a method that he felt could be replicated on other farms. Frinj Coffee is now grown on over 70 farms across Southern California, employing the growing methods Ruskey has perfected for the persnickety plant over the years.

The benefits to establishing coffee in Southern California are numerous for local farmers. Ruskey’s model involves the use of one of the most quintessential of California’s crops: avocados. Interplanting the coffee trees (which is a fruit crop) amongst avocado trees has proven they are of mutual benefit to each other.

“These two crops working together has shown that they can buffer one another and provide a more resilient system,” Ruskey said. “Of all crops that we consume every day, introducing coffee to our local landscape is not a bad thing, especially given that this is an essential food item for many people.”

For water-strapped California, Ruskey points out that the introduction of coffee trees doesn’t require extra water — the two species are watered simultaneously and evenly.

Another benefit to farming coffee in California is the sustainability factor. Before reaching our cups, coffee beans go on quite the journey, being passed through dozens of hands and crossing many international borders. By producing locally, Frinj is able to cut the time and distance traveled, meaning it requires fewer resources and lower emissions for coffee to reach us.

“So what we’re doing here in California, where it goes from Frinj farmers directly to the consumer, is probably the shortest path to your cup of coffee in California," he said.

But the strength of the Frinj model really lies in its commitment to the farmers. For every dollar made on the production of Frinj coffee, 50 cents go back to the farmer who grew it.

Mike Masino owns and runs Rancho Delfino, also in Santa Barbara County, where he’s been working with Ruskey and growing Frinj Coffee since 2015. Masino is one of the most successful farmers working with Frinj varietals like Geisha, which has won big accolades and awards from the fine coffee world.

Masino is so entranced with the step-by-step process of coffee bean production that he and his son Richard learned how to roast the beans themselves.

“When I walk by a tree that has ripe cherry on it, I’ll always pick it and eat it just to see. I like the taste of them,” he said.

But Masino is most inspired by Ruskey’s dedication to helping farmers.

“He’s worked so hard to get us at least 50% of the coffee back to us personally,” said Masino. “I think it’s unheard of in agriculture.”

For Ruskey, this kind of model is the only way forward.

“If we really want to have a secure supply of coffee in the future and we want farmers to adapt to the change in climate, and changing markets, we need to pay our farmers better," he said.

And he’s betting the farm that coffee is the crop that will make California the leader in sustainable agriculture.