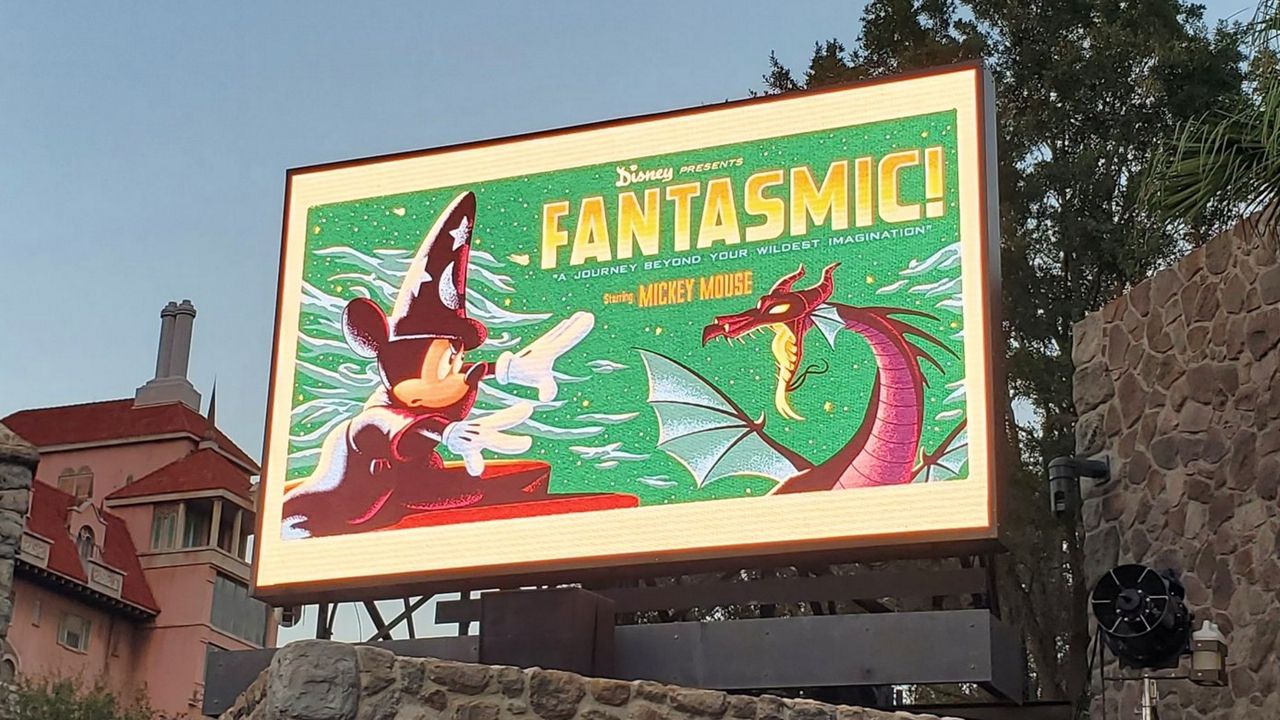 The new billboard for Fantasmic! illuminated on the night of the show's return to Disney's Hollywood Studios, Nov. 3, 2022. (Spectrum News/Ashley Carter)

ORLANDO, Fla. — After a nearly three year hiatus, the nighttime spectacular Fantasmic made its official return to Disney’s Hollywood Studios on Thursday evening.

The show, which is presented in the Hollywood Hills Amphitheater near Tower of Terror, has been dark since March 2020, when the pandemic prompted Disney World to temporarily shut down its parks and resorts.

Thousands of eager fans lined up Thursday to catch the first performance of the show. At one point, the line stretched all the way down Sunset Boulevard.

As for the show itself, the storyline remains mostly the same. It still centers around the power of imagination and follows Mickey Mouse’s dream as he battles different Disney villains along with moments from different Disney animated films.

However, during the show’s downtime, Disney made some adjustments, including a new sequence with new characters and upgrades to the special effects.

“We got this great opportunity to become more relevant,” said Tom Vazzana, director of creative development. “That was the most beautiful thing that ever happen was, how do we take this amazing show, this time we’ve been given, and then to put in seamlessly a new story for the next generation of our audiences and our old generation. How do we stay relevant, how do we approach our new Disney heroes?” The show’s original Pocahontas sequence has been replaced with a new “heroes” sequence that features characters such as Moana, Mulan, Aladdin, Elsa and, yes, even Pocahontas, who starts it off. Each character is showcased with a song from their respective movies along with special effects.

This section also includes moments from other films such as “Tarzan,” “The Hunchback of Notre Dame,” “Encanto” and “The Princess and the Frog” projected onto water screens.

Technical improvements to the show include the projections on the water screens, which are clearer and more vibrant than before, sound enhancements, new lighting and upgraded lasers.

“We all think about lasers in a unique way,” said show director Matthew Hamel. “We’re utilizing them in a bit more of an artistic way, textured way. I think that there will be times you’re seeing a laser and you don’t even realize you’re seeing it.”

Fantasmic, which now has a runtime of about 30 minutes with the new sequence, is scheduled to have nightly performances. Showtimes will vary but, according to the calendar on the Disney World website, performances will be at 8 p.m. and 9:30 p.m. through Nov. 7. After that it will be one showtime at either 8 p.m. or 9 p.m. And beginning Nov. 30, Disney will offer a Fantasmic dining package that includes VIP seating for the show.