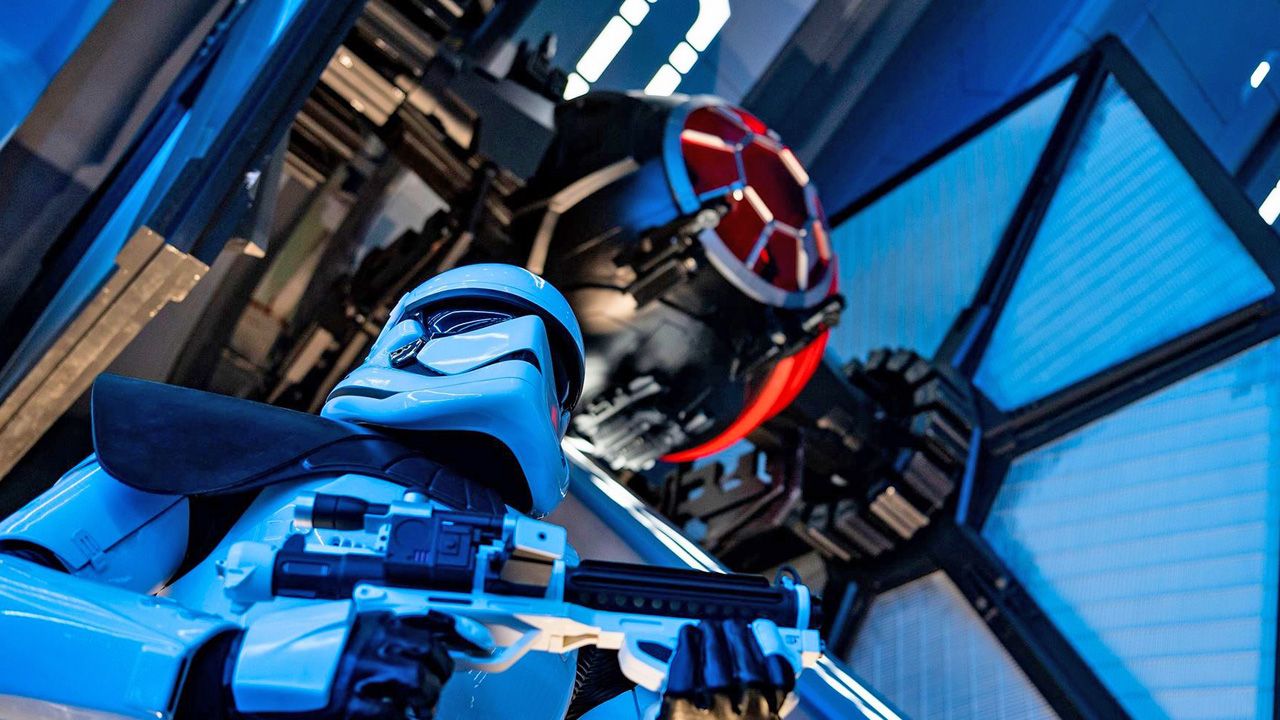 Disney has dubbed Rise of the Resistance as "the most ambitious attraction" the company has ever undertaken. And with multiple ride systems, dozens of animatronics, state-of-the art projections, special effects, and larger-than-life set pieces, it's easy to see why.

Here’s a glimpse at the first part of the #RiseOfTheResistance queue. This pathway leads to a cave-like area of stone walls and tight hallways. There’s also a waterfall up ahead. @MyNews13 @BN9 pic.twitter.com/eM5QaWZeXx


And here’s a look inside the tight hallways and stone walls I previously mentioned. See, cave-like. Again, this is part of the queue. #RiseOfTheResistance pic.twitter.com/Ilr7s5elHx

Just wait until you see the more than 50-foot-tall AT-ATs up close.

When riders enter the attraction, they become part of the Resistance. The gist of the story is this: You're recruited to join the Resistance for a secret mission. But plans hit a snag when riders are captured by Kylo Ren and the First Order and must find a way to escape.

The mission begins in the forest area of the queue where riders enter a briefing room with BB-8. A hologram of Rey will appear to welcome recruits and share plans of the mission.

Riders will then be taken to the Transport Ship, which is essentially another preshow room, where riders will meet a character named Lt. Bek. This area is more active, as the transport ship is a simulator that moves and shakes as riders head to Batuu.

Good morning, #StarWars fans. Disney has released new images from inside Star Wars: #RiseOfTheResistance ahead of its public debut. I'm heading to Hollywood Studios soon to try it out. Follow along and keep an eye out for my review. In the meantime, enjoy these new pictures. pic.twitter.com/3NSETnPAFu

However, before making it there, riders are captured by a Star Destroyer and pulled into a massive First Order hangar bay, where they'll find Stormtroopers and First Order officers.

Riders are then escorted to an interrogation room with Kylo Ren and General Hux. A few special effects happen, and riders are guided to eight-person, trackless transport vehicles that are guided by R5-series droids.

Without delving too much into what happens from there, let's just say that there's a lot to take in. For many Star Wars fans, the experience may be sensory overload.

The transport vehicles go forward, backward, sideways, and spin as they make their way from scene to scene. Along the way, riders will face blaster bolts from Stormtroopers, larger-than-life AT-ATs, and a host of other perilous situations as they try to make it safely back to Batuu.

Just rode #RiseOfTheResistance. I need a moment to collect my thoughts, but initial reaction is WOW. This is one really cool attraction. pic.twitter.com/hUH60RKV7j

And, yes there is a drop. It's not too intense, but it's enough to make your stomach jump.

So many special effects throughout the ride really ramp up the experience. There is the projection technology used to create the illusion of blaster damage on the walls and AT-ATs.

Next, you’ll enter the “Intersystem Transport Ship,” which is another “preshow” area. But the cool thing about this one is the room moves and shakes. You’re standing for this, but there are rails to hold onto. #RiseOfTheResistance pic.twitter.com/tl6CfjYMu1

There are clear scenes of Stormtroopers and Kylo Ren on screen. There are wind and sound effects that add to the atmosphere. Some parts of the attraction feature scenes, and the rest is practical sets. And along the way, there's a score from composer John Williams that soars at a various parts.

OK, from there you enter the first “preshow area,” which is a briefing room with BB-8. Rey later appears as a hologram on the right to share plans of the mission. #RiseOfTheResistance pic.twitter.com/NieRhyhqfd

Rise of the Resistance is different and unique — it's unlike other Disney attractions in the best possible way.

With its completion, Rise of the Resistance joins Millennium Falcon: Smugglers Run and the rest of Star Wars: Galaxy's Edge, which opened at Hollywood Studios in August.

A version of Rise of the Resistance will open at Disneyland in California on January 17.