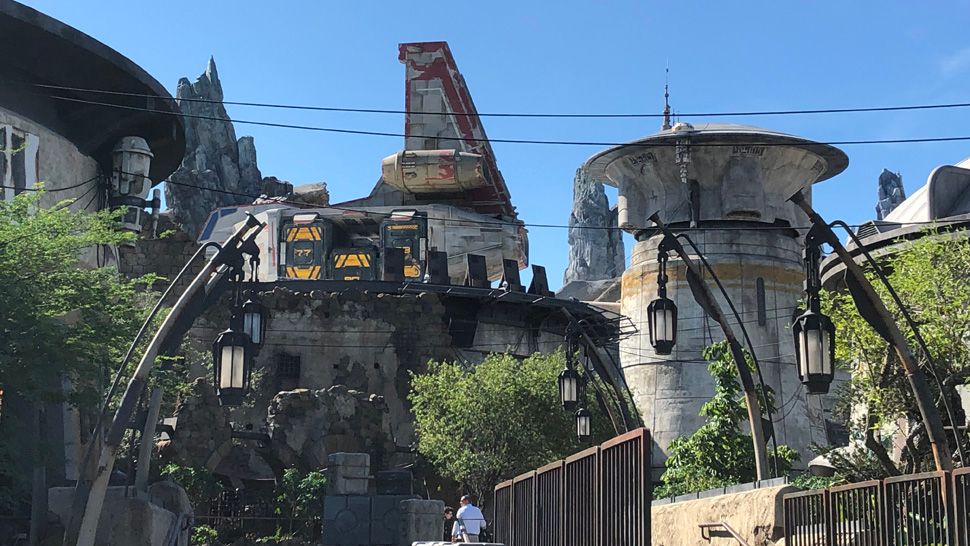 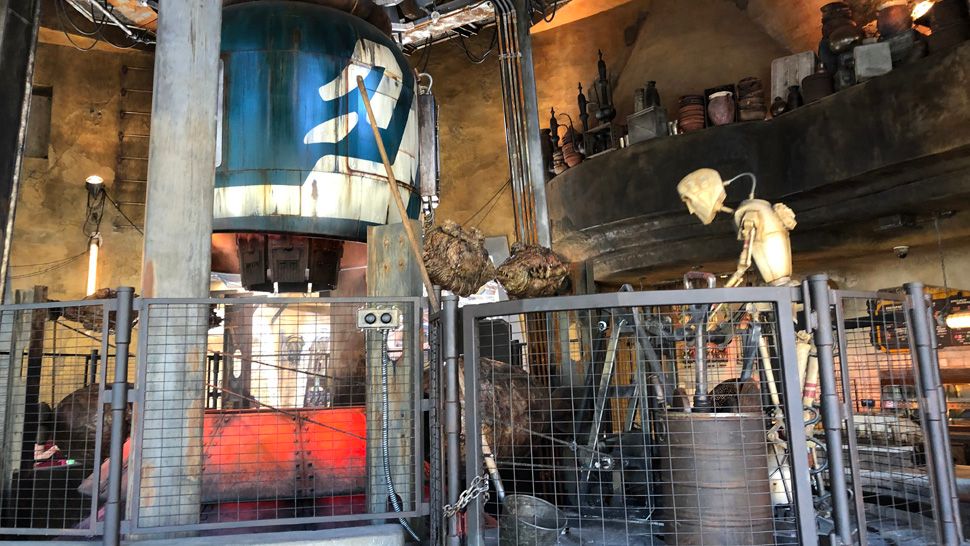 2 of 4
Ronto's Roasters features a smelter droid that is turning the spits at the eatery.(Ashley Carter/Spectrum News 13) 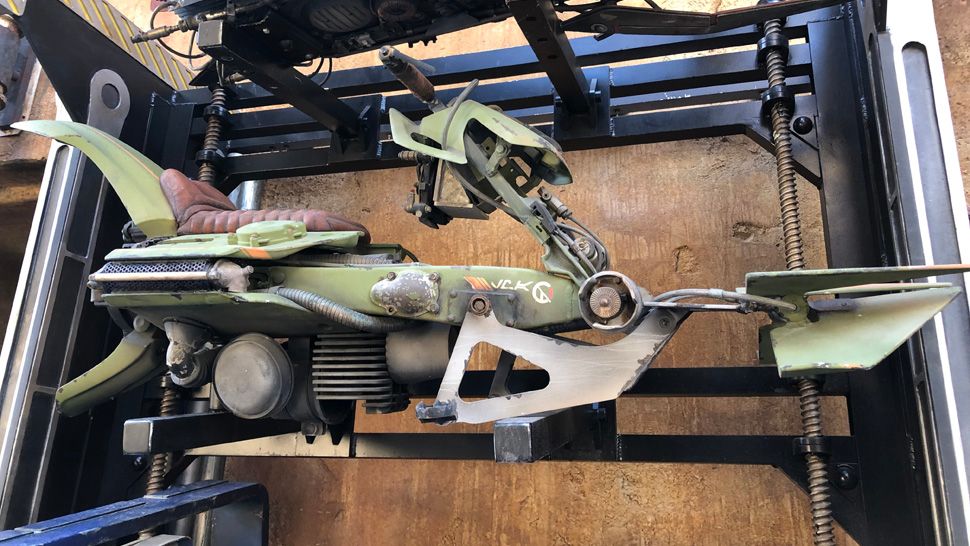 3 of 4
In Black Spire Outpost Marketplace, this green speeder bike has the letters :LMA" painted on it in Aurebesh. What could they mean? (Ashley Carter/Spectrum News 13) 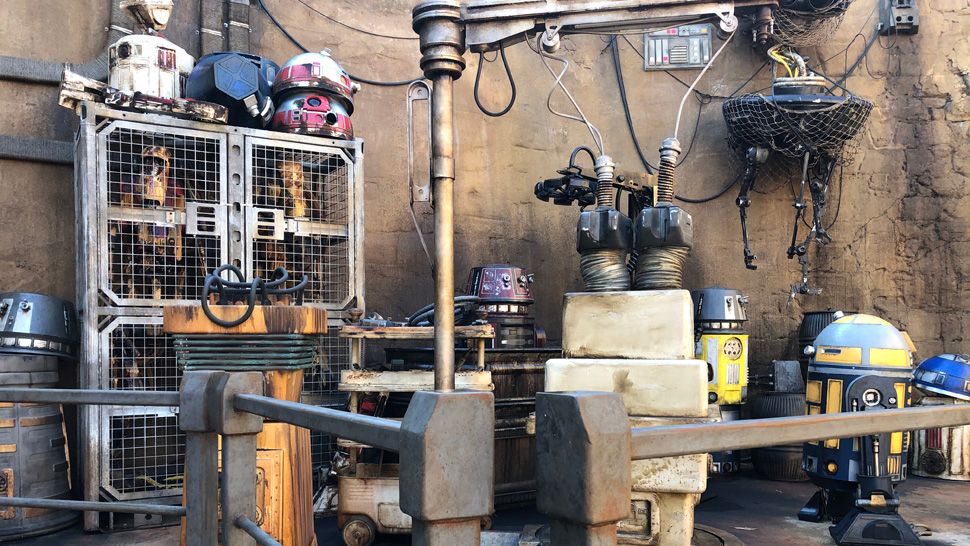 4 of 4
In Droid Alley, around the corner from Droid Depot, you'll find several old units, including Trade Federation droids like the ones that appeared in "Star Wars: Episode I — The Phantom Menace." (Ashley Carter/Spectrum News 13)

ORLANDO, Fla. — Star Wars: Galaxy's Edge, one of Disney World's most ambitious additions, is set to open on August 29.

The 14-acre land at Disney's Hollywood Studios is set on the planet Batuu, where guests can visit a remote port called Black Spire Outpost. Visitors will encounter villagers, merchants, and well-known Star Wars characters such as Chewbacca and Kylo Ren as they explore the port.

And although fans will easily spot Star Wars icons such as the Millennium Falcon, some callbacks require a keen eye.

The alleyways, marketplace, and even the shops are filled with Easter eggs. Some reference Star Wars movies and TV shows; others hark back to previous Hollywood Studios attractions.

Here are a few to look out for as you explore the land:

In Black Spire Outpost Marketplace, look for a display of three speeder bikes along one of the walls. Take a closer look at the green bike in the middle. On the side of the bike, you'll find the letters "LMA" painted in Aurebesh. The letters stand for "Lights, Motors, Action," the stunt show that once occupied the area where Galaxy's Edge is located.

Also inside the marketplace is a water fountain that contains an Easter egg from "Star Wars: A New Hope." Inside the tank is a dianoga, the one-eyed creature Luke Skywalker encountered in the trash compactor.

When visiting the Creature Stall in the marketplace, keep your eyes peeled for a cage containing a sleeping Loth-cat, a creature seen in "Star Wars Rebels."

In Droid Alley, around the corner from Droid Depot, you'll find several old units. Look toward the back wall. Inside a large metal storage crate, you'll find a pair of Trade Federation droids, similar to the ones featured in "Star Wars: Episode I — The Phantom Menace."

At some point, you are likely to get hungry during your trip to Batuu. If you stop over in Docking Bay 7 Food and Cargo, look for the numbered containers. They feature the numbers 77, 80, and 83, which stand for 1977, 1980, and 1983 — the years the original Star Wars films were released.

Ronto's Roasters features a smelter droid turning the spits at the eatery. The droid is modeled after the unit seen in Jabba's palace in "Star Wars: Return of the Jedi."

As you make your way through the queue of Millennium Falcon: Smugglers Run, look off to the side. In one section, you'll see a table featuring the card game Sabacc.

Once inside the main hold of the Millennium Falcon, look behind the holochess table. There you'll find a box with Luke Skywalker's training remote and helmet. The items were seen in "Star Wars: A New Hope."

Walking around the land, you'll see trash cans. Look at them closely. They all feature letters in Aurebesh and the numbers "3263827." If you translate the letters, the trashcan says, "trash to sector 3263827." Of course, the number refers to the Death Star trash compactor where Luke, Leia, and Han Solo got stuck.

And there are plenty of other Easter eggs throughout the land. See what others you can find.