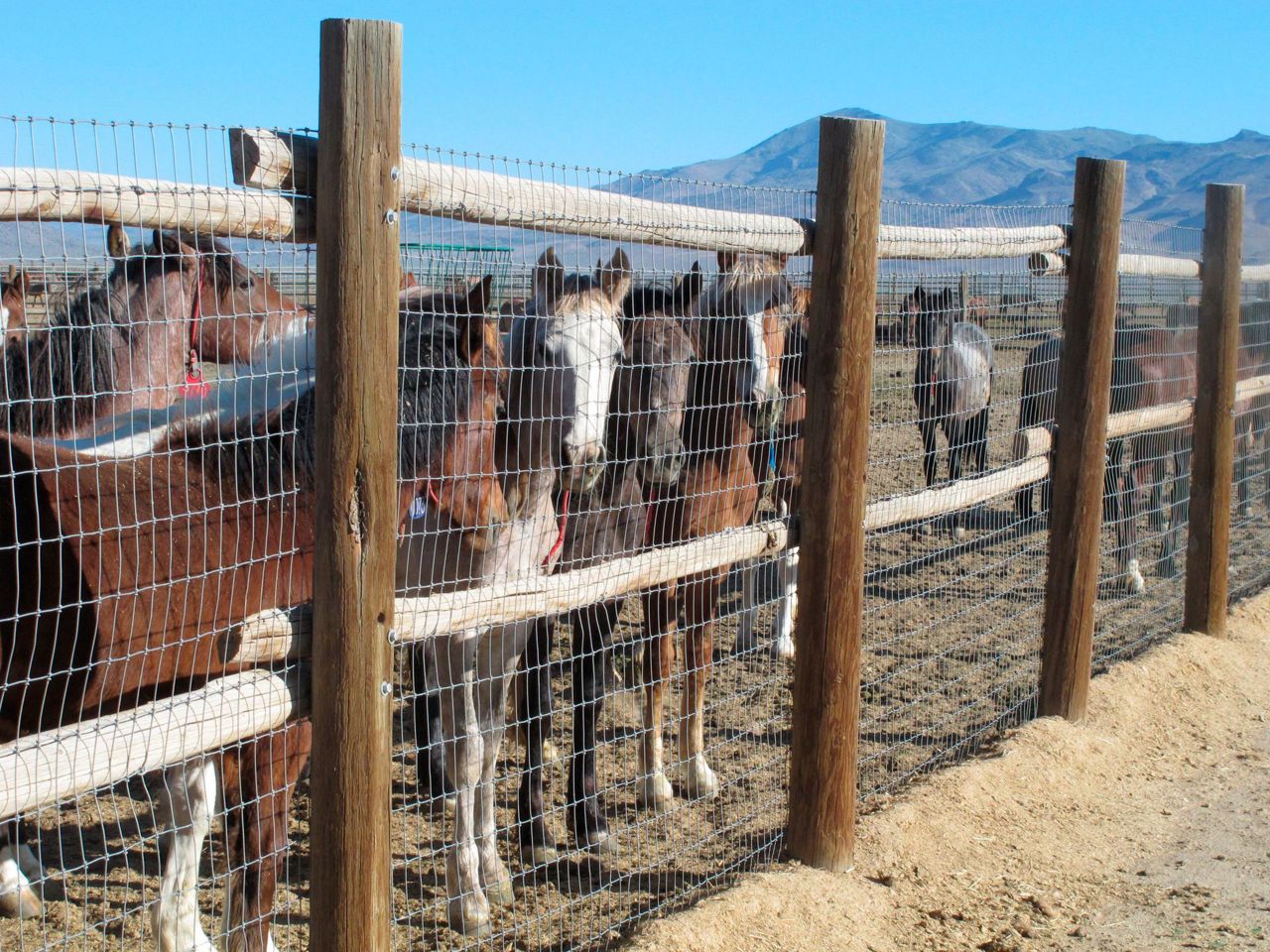 1 of 3
FILE - Horses stand behind a fence at the BLM Palomino Valley holding facility on June 5, 2013, in Palomino Valley, Nev. A federal judge is considering temporarily suspending the capture of wild horses in Nevada where their advocates say the federal government is “needlessly and recklessly” killing free-roaming mustangs in violation of U.S. laws. (AP Photo/Scott Sonner, File) 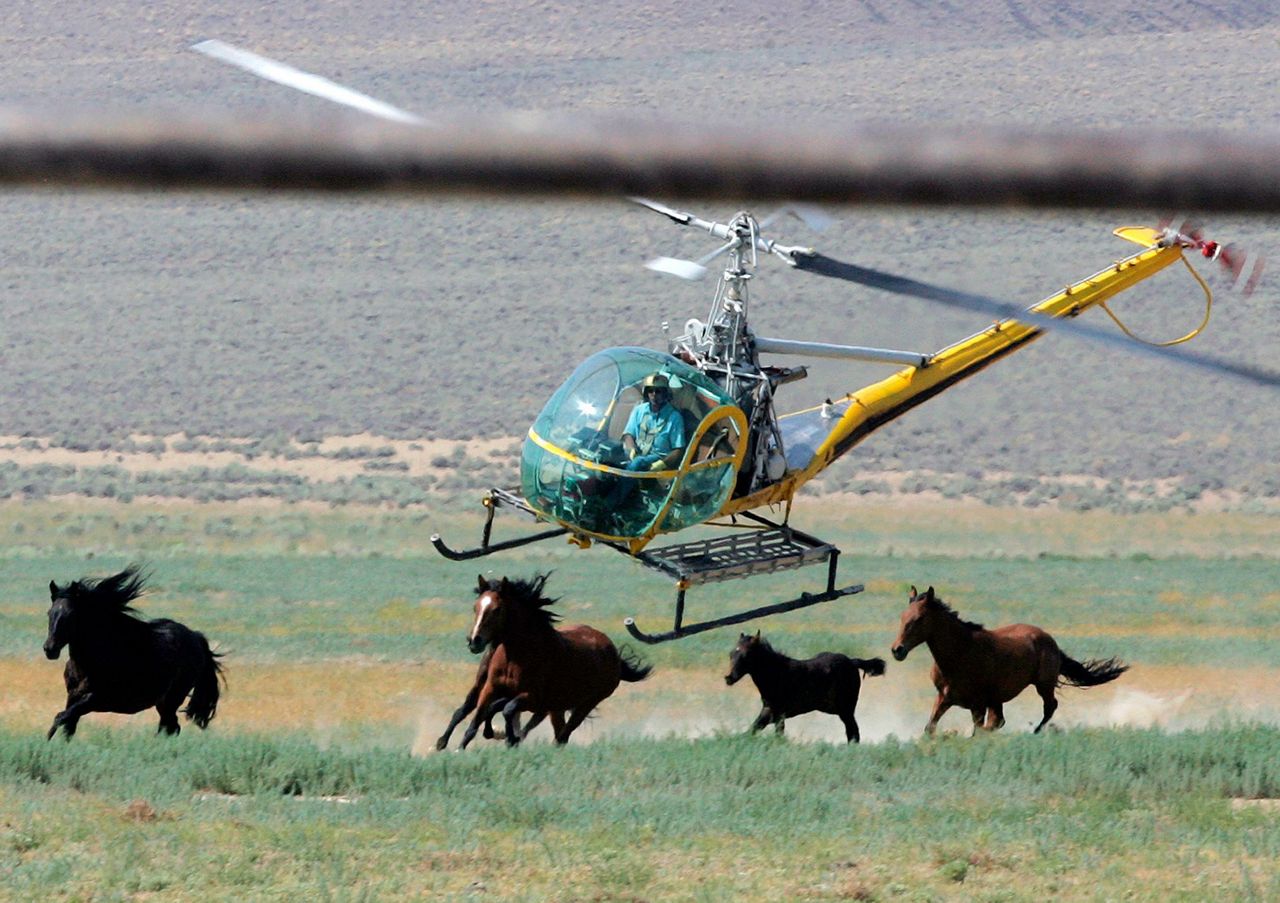 2 of 3
FILE - A livestock helicopter pilot rounds up wild horses from the Fox & Lake Herd Management Area on July 13, 2008, in Washoe County, Nev., near the town on Empire, Nev. A federal judge is considering temporarily suspending the capture of wild horses in Nevada where their advocates say the federal government is “needlessly and recklessly” killing free-roaming mustangs in violation of U.S. laws.. (AP Photo/Brad Horn, File) 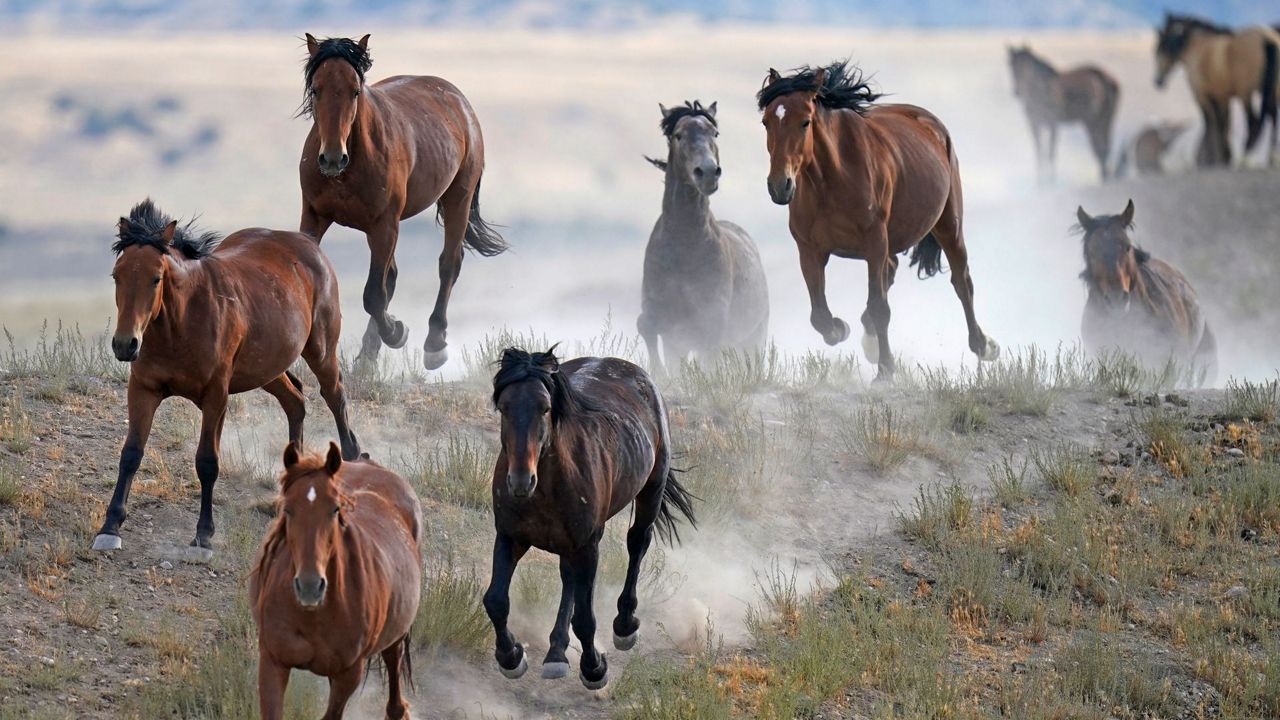 3 of 3
FILE - Free-ranging wild horses gallop from a watering trough on July 8, 2021, near U.S. Army Dugway Proving Ground, Utah. The U.S. government plans to capture more wild horses on federal lands this year than ever before in a single year, drawing outrage from mustang advocates who were counting on the Biden administration to curtail the widespread gathers of thousands of horses annually. (AP Photo/Rick Bowmer, File)

US judge may suspend mustang roundup in Nevada; suit pending

RENO, Nev. (AP) — A federal judge decided Friday not to rein in the roundup and capture of wild horses in eastern Nevada, rejecting advocates' claims the federal government was “needlessly and recklessly” killing free-roaming mustangs in violation of U.S. law.

With a little more than four weeks to go for federal land managers to complete what they call a drought-prompted “gather” near the Utah state line, U.S. District Judge Miranda Du said she wasn't convinced groups trying to stop the process would win their underlying lawsuit.

“The court finds that plaintiffs have not shown they are likely to succeed on the merits of their claims and that the balance of equities in this instance weighs against enjoining the 2022 gather,” she said.

The U.S. Bureau of Land Management insists it must round up the mustangs before the end of February — one of several operations scheduled on an expedited basis due to historically dry conditions on the Western range.

Maggie Smith, a Justice Department lawyer, told the judge on Wednesday that a delay of even two or three days would prevent the agency from completing planned removals before the end of the year.

“This is a very high priority (for the bureau). It’s an area that is suffering from extreme drought conditions, very limited forage and a huge overpopulation of horses,” Smith said.

The bureau plans to capture more horses this year than ever before, at least 19,000 across 10 western states. The 13,666 gathered last year was the previous high.

Agents are prohibited from using helicopters to drive herds into temporary corrals from March 1 to June 1, when mares typically are pregnant and give birth. After that, summer heat adds stress on the animals and contractor availability becomes a problem in the fall, Smith said.

Horse advocates led by Laura Leigh, Wild Horse Education, Animal Wellness Action and the nonprofit CANA Foundation say the agency is squeezing the roundup of 2,030 horses in Nevada into a month under an illegal environmental assessment of a series of gathers over 10 years.

The horse groups say the low-flying helicopters combined with “unsafe muddy conditions on the ground in mid-January create a purely artificial hazard that is deadly to these wild horses, a congressional protected, public natural resource.”

The bureau said a 1% fatality rate was consistent with the 1.1% rate estimated as the average for all horse gathers from 2010-19.

“In short, there is nothing to suggest the conditions of this gather are unusually dangerous to the horses,” it said in response to the request for Du's emergency order.

“It fact,” Smith told Du, “it is proceeding very smoothly. While we certainly regret the harm to any animal, what we are seeing here is exactly what we expected,.”

Du asked lawyers for the horse groups if they expected no horses to die in the roundup.

Jessica Blome, a lawyer for the plaintiffs, said that while some deaths do typically occur, in this case, there have been “more than necessary."

“This particular herd is foaling now and pregnant now,” Blome told Du on Wednesday. “If they had followed the proper process and monitored the herd, they would know that.”

Copyright 2022 The Associated Press. All rights reserved. This material may not be published, broadcast, rewritten or redistributed without permission.