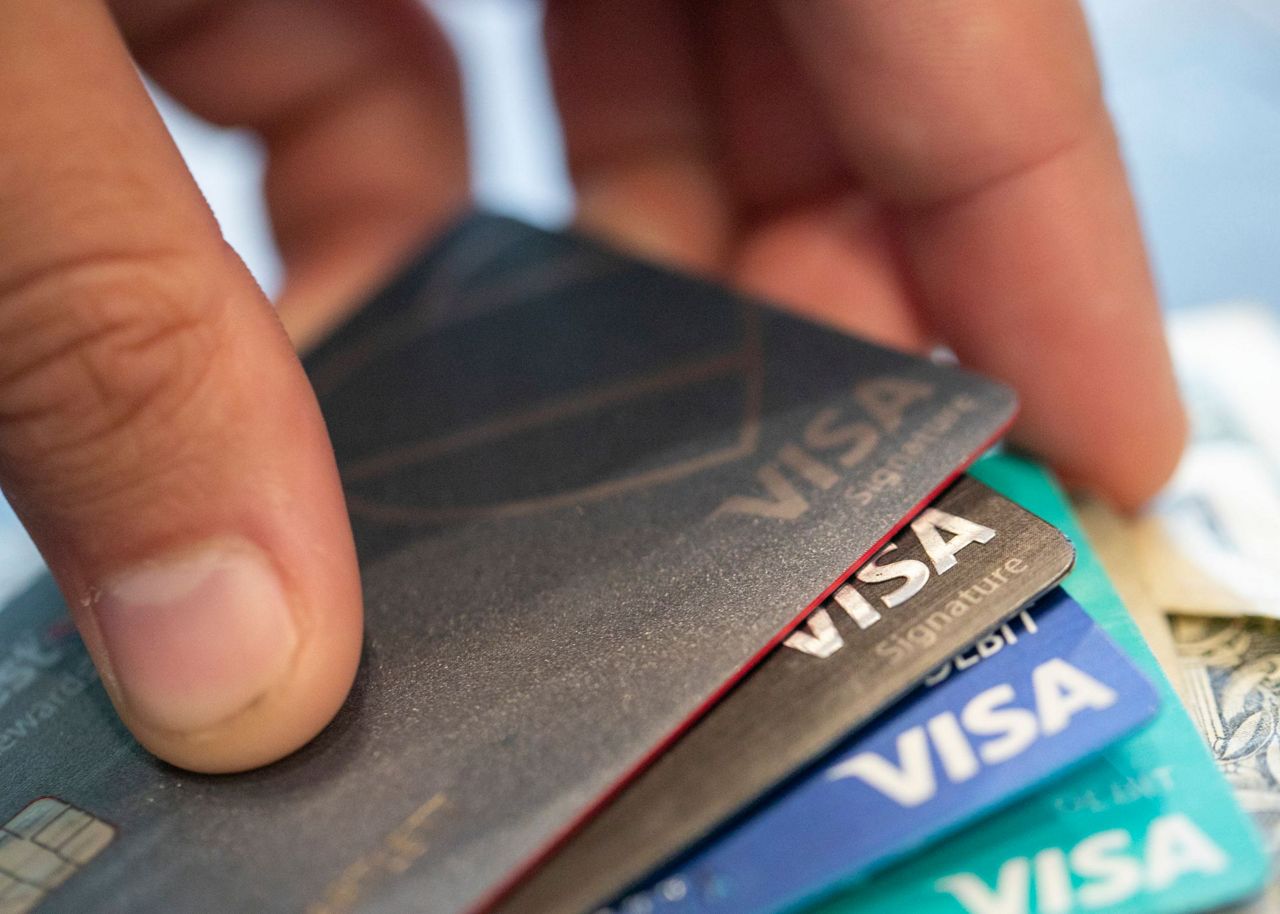 FILE - This Aug. 11, 2019 file photo shows Visa credit cards in New Orleans. Borrowing by Americans fell in January 2021 for the first time in five months, as a big drop in the use of credit cards offset increases in auto loans and student loans. The Federal Reserve reported Friday, March 5, 2021 that consumer borrowing fell by $1.3 billion in January, the first setback since a $9 billion decline in August. (AP Photo/Jenny Kane, File)

US consumers eased off credit card borrowing in January

WASHINGTON (AP) — Borrowing by Americans fell in January for the first time in five months, as the use of credit cards fell to the lowest level in four years, offsetting gains in auto loans and student loans.

The Federal Reserve reported Friday that consumer borrowing fell by $1.3 billion in January, the first setback since a $9 billion decline in August.

The weakness came from a $9.9 billion decline in borrowing in the category that covers credit cards. It marked the fourth straight decline in that category and was the biggest drop since a $10.8 billion fall in August. It pushed credit card activity down to the lowest level since January 2017.

The category that covers auto and student loans posted an $8.6 billion increase in the first month of 2021, following an even bigger gain of $11.6 billion in December.

Consumer borrowing is closely watched for indications about Americans' willingness to take on more debt to finance their spending, which accounts for two-thirds of U.S. economic activity.

Since the pandemic hit a year ago, millions have lost their jobs and households have grown more cautious, boosting their savings levels as a hedge against economic uncertainty.

Nancy Vanden Houten, senior economist at Oxford Economics, said she believes the drop in borrowing reflects a decision by consumers to use their $400 stimulus checks from a relief bill passed in December to pay down debt rather than increase spending.

But she forecast that consumer borrowing will rebound.

“We expect growth in consumer credit ... will accelerate in the months ahead as spending springs back to life in response to a healing labor market and more fiscal support,” she said. She estimated that half of the $1.9 trillion rescue package making its way through Congress will provide direct relief for households.

In a separate report, the government said Friday that U.S. employers added 379,000 jobs in February, the most since October. The increase was viewed as a hopeful sign that as virus cases drop, restaurants and other hard-hit businesses are stepping up their hiring.

The drop in borrowing in January meant total consumer credit in the Fed report dipped by 0.4% to $4.18 trillion. The Fed's monthly report does not cover home mortgages or any other loans backed by real estate such as home equity loans.