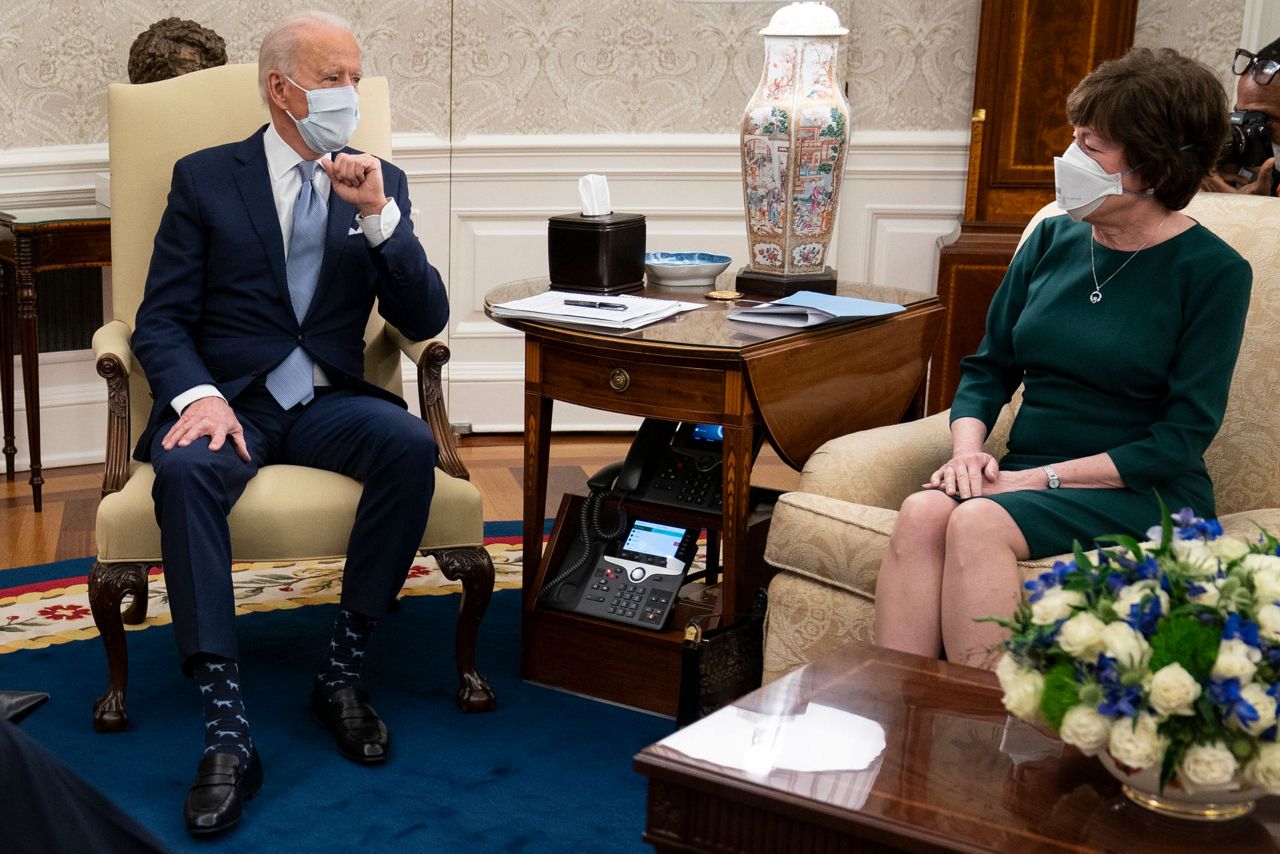 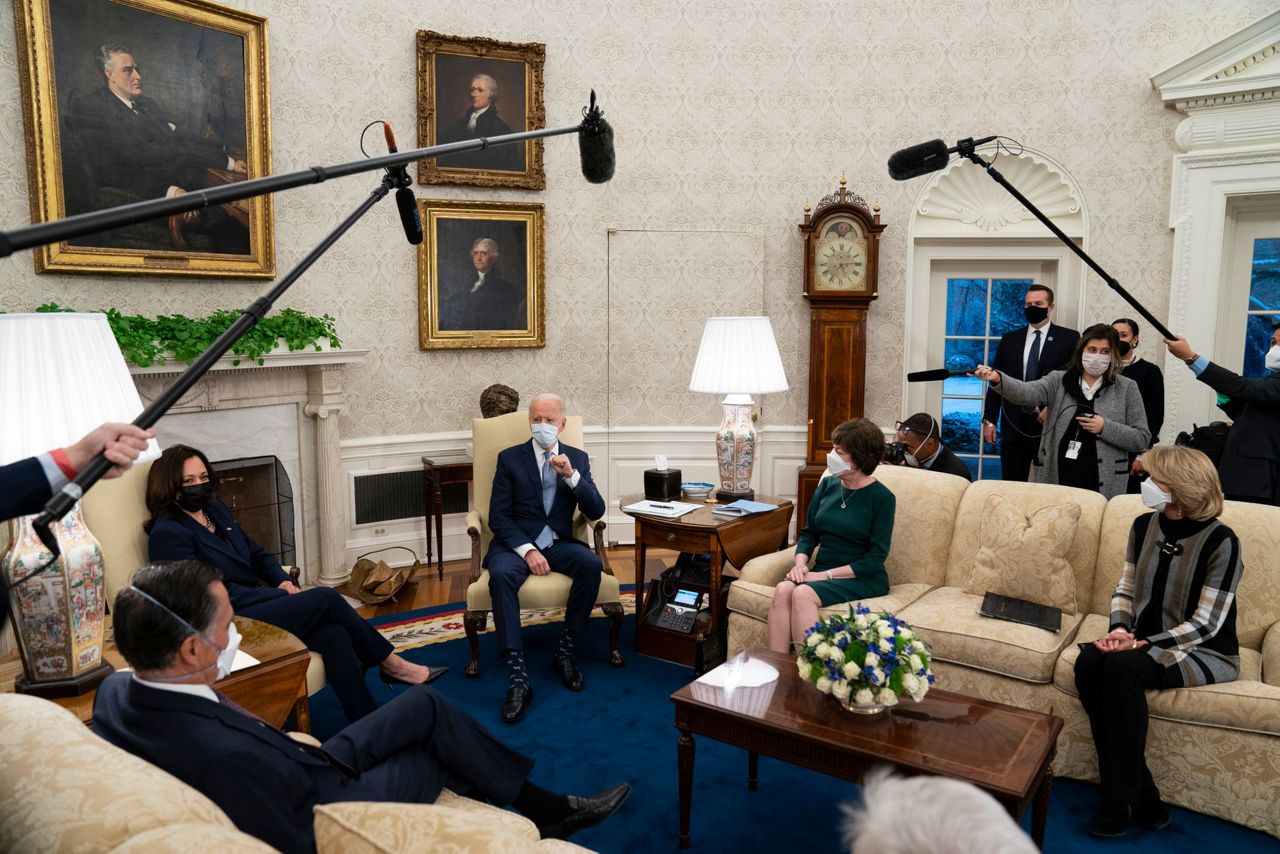 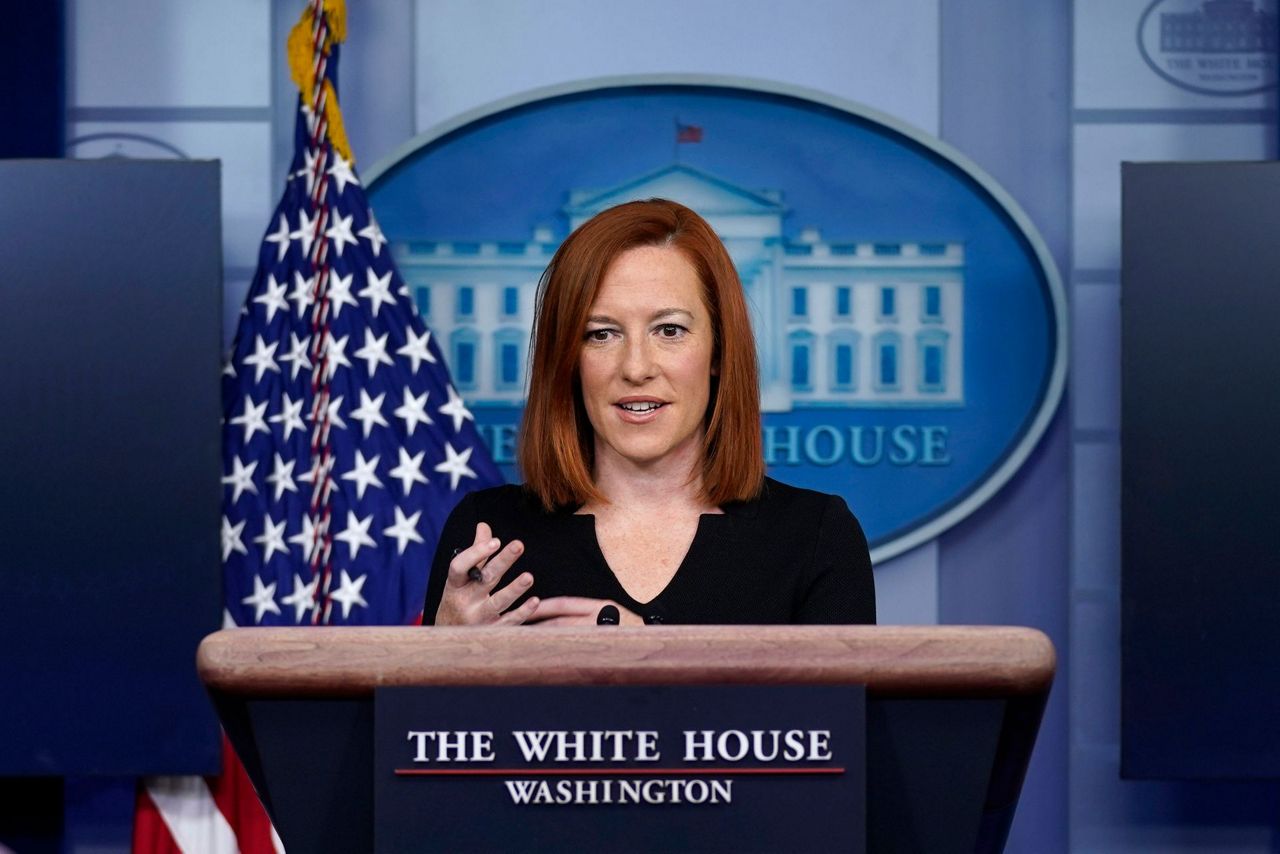 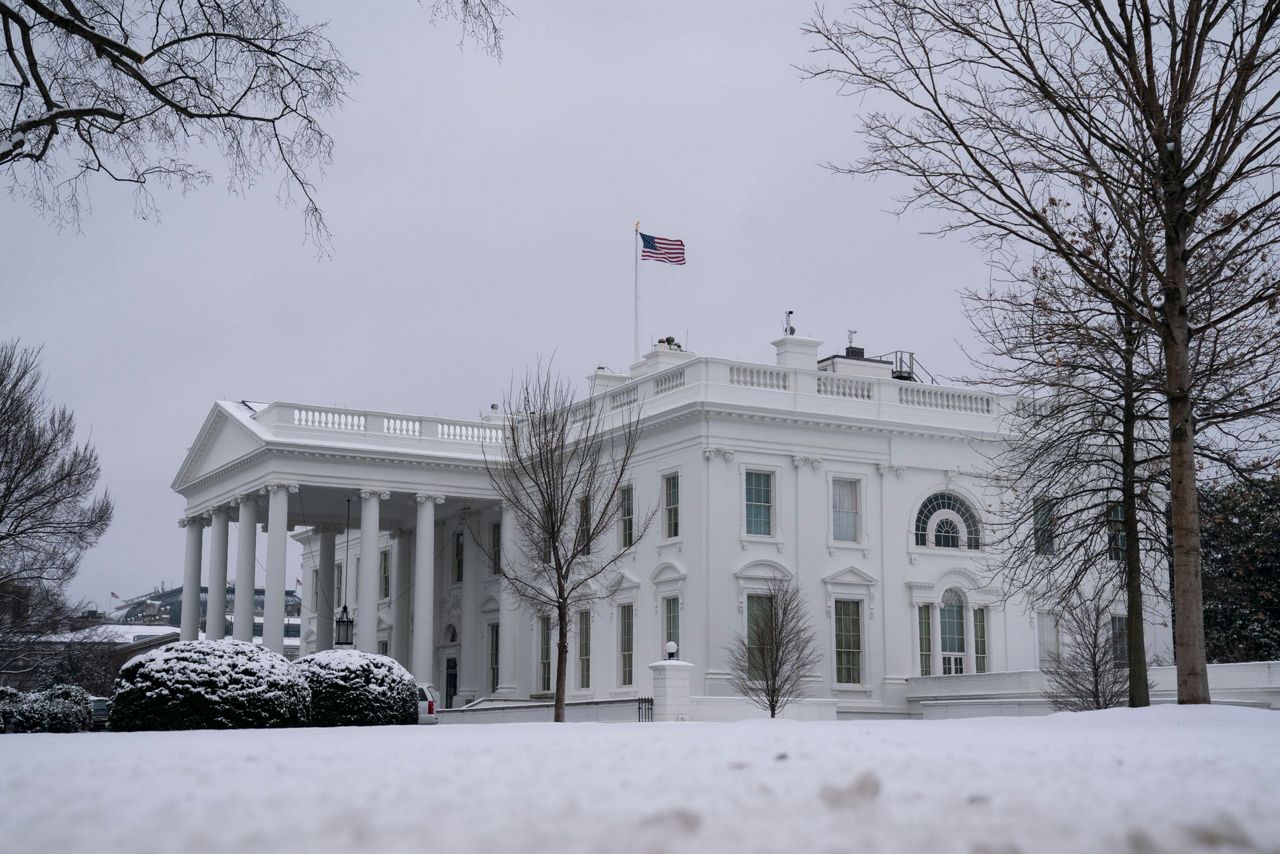 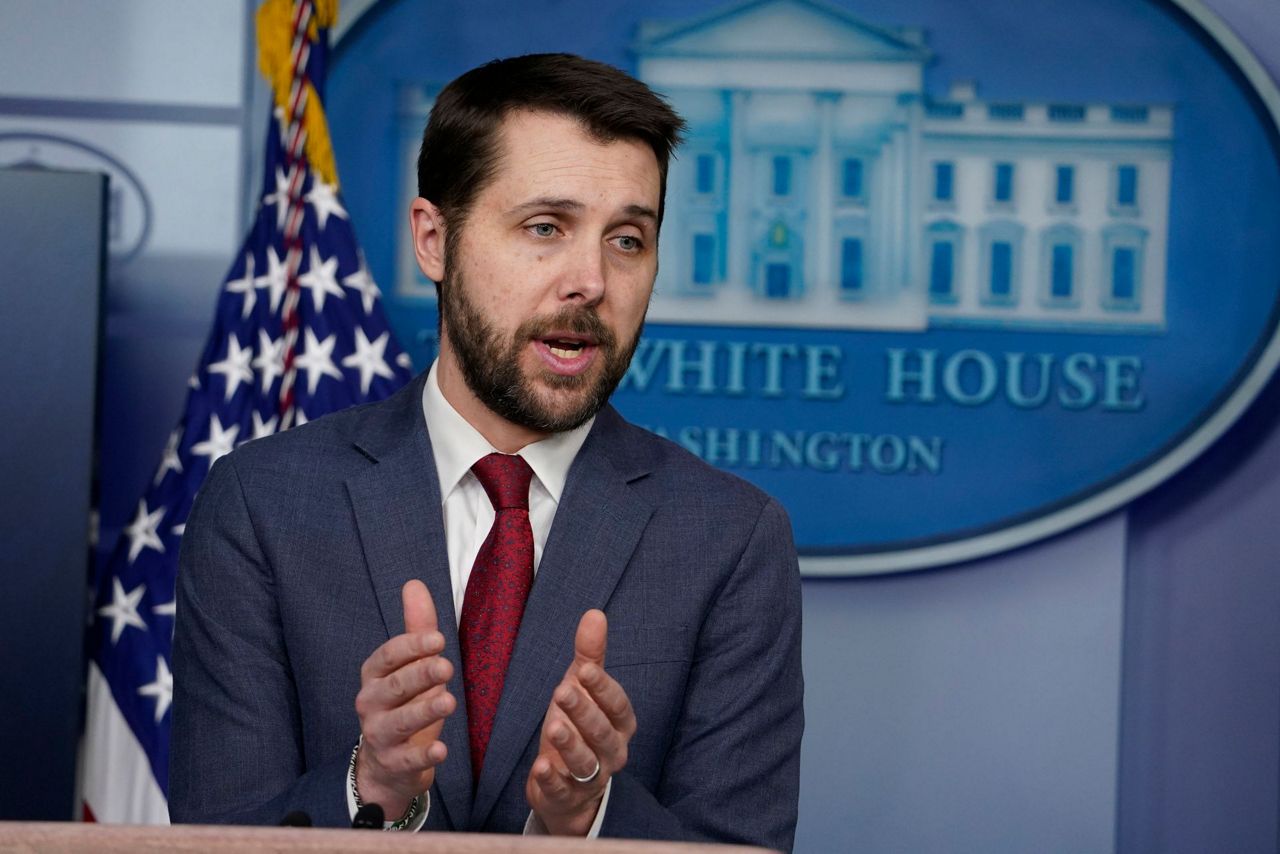 Biden to meet with GOP lawmakers to discuss virus relief

WASHINGTON (AP) — President Joe Biden met late Monday with a group of Republican senators who have proposed a slimmed down $618 billion coronavirus aid package — a fraction of the $1.9 trillion he is seeking — as congressional Democrats vowed to push ahead with or without GOP support.

Biden greeted the lawmakers in the Oval Office, joking that he felt like he was “back in the Senate” as they started the private session. He and Vice President Kamala Harris were hearing the Republicans' pitch for a smaller, more targeted COVID relief package that would do away with Democratic priorities but could win GOP support and appeal to his effort to unify the country.

The Republican group's proposal taps into bipartisan urgency to shore up the nation's vaccine distribution and vastly expand virus testing with $160 billion in aid, similar to what Biden has proposed. But from there, the two plans drastically diverge. Less focused on economic aid, the GOP's $1,000 direct payments would go to fewer households than the $1,400 Biden has proposed, and the Republicans offer only a fraction of what he wants to re-open schools.

They also would give nothing to states, money that Democrats argue is just as important, with $350 billion in Biden's plan to keep police, fire and other workers on the job.

Gone are Democratic priorities such as a gradual lifting of the federal minimum wage to $15 an hour.

Engaging the White House in high-profile bipartisan talks comes House and Senate Democrats announced they would push ahead, laying the groundwork for approving Biden's package with a process that won't depend on Republican support for passage.

Senate Majority Leader Chuck Schumer warned that history is filled with “the costs of small thinking.”

“The cost of inaction is high and growing, and the time for decisive action is now," he and Speaker Nancy Pelosi said in a joint statement.

The goal is for approval of COVID relief by March, when extra unemployment assistance and other pandemic aid expires.

The overture from the coalition of 10 GOP senators, mostly centrists, is an attempt to show that at least some in the Republican ranks want to work with Biden’s new administration, rather than simply operating as the opposition in the minority in Congress. But Democrats are wary of using too much time courting GOP support that may not materialize or delivering too meager a package as they believe happened during the 2009 recovery.

The accelerating talks came as the Congressional Budget Office delivered mixed economic forecasts Monday with robust growth expected at a 4.5% annual rate but employment rates not to return to pre-pandemic levels for several years.

White House press secretary Jen Psaki said there is “obviously a big gap” between the $1.9 trillion package Biden has proposed and the $618 billion counteroffer.

Psaki said Monday that the meeting with Republican lawmakers would be an “exchange of ideas” but Biden would reiterate his stance that “the risk is not that it is too big, this package, the risk is that it is too small.”

An invitation to the GOP senators to meet at the White House came hours after the lawmakers sent Biden a letter on Sunday urging him to negotiate rather than try to ram through his relief package solely on Democratic votes.

“We recognize your calls for unity and want to work in good faith with your Administration to meet the health, economic, and societal challenges of the COVID crisis,” the 10 GOP senators wrote to Biden. “We share many of your priorities.”

The cornerstone of the GOP plan is $160 billion for the health care response — vaccine distribution, a “massive expansion” of testing, protective gear and funds for rural hospitals, according to a draft.

Other elements of the package are similar to Biden's plan but at far lesser amounts, with $20 billion to reopen schools compared to $170 billion. The Republicans offer $40 billion for Paycheck Protection Program business aid.

With Biden's plan, the direct payments would be phased out at higher income levels, and families with incomes up to $300,000 could receive some stimulus money.

The meeting to be hosted by Biden would amount to the most public involvement for the president in the negotiations for the next round of virus relief.

Winning the support of 10 Republicans would be significant for Biden in the 50-50 Senate where Vice President Kamala Harris is the tie-breaker. If all Democrats were to back an eventual compromise bill, the legislation would reach the 60-vote threshold necessary to overcome potential blocking efforts and pass under regular Senate procedures.

The plea for Biden to give bipartisan negotiations more time comes as the president has shown signs of impatience as the more liberal wing of his party considers passing the relief package through a process known as budget reconciliation. That would allow the bill to pass with a 51-vote majority in the Senate, rather than the 60 votes typically needed to advance.

The White House remains committed to exploring avenues for bipartisanship even as it prepares for Democrats to move alone on a COVID relief bill, according to a senior administration official granted anonymity to discuss the private thinking.

However, the number being brought to the table by Republicans was viewed as too small, according to the official.

At the same time, the White House may be willing to adjust its ask, perhaps shifting some less virus-oriented aspects into a subsequent package that is set to go next before Congress, the official said.

Biden himself has been on the phone to some of the Republicans coming to the White House on Monday and more in-person outreach is expected in the days ahead, the official said.

The other GOP senators invited to meet with Biden are Lisa Murkowski of Alaska, Mitt Romney of Utah, Shelley Moore Capito of West Virginia, Todd Young of Indiana, Jerry Moran of Kansas, Mike Rounds of South Dakota, and Thom Tillis of North Carolina.

Biden has leaned on his resume of decades in the Senate and as vice president to bring the parties together to solve vexing political problems, but less than two weeks into his presidency, Biden has shown frustration with the pace of negotiations as applications for jobless benefits remain stubbornly high and COVID death toll nears 450,000 Americans.