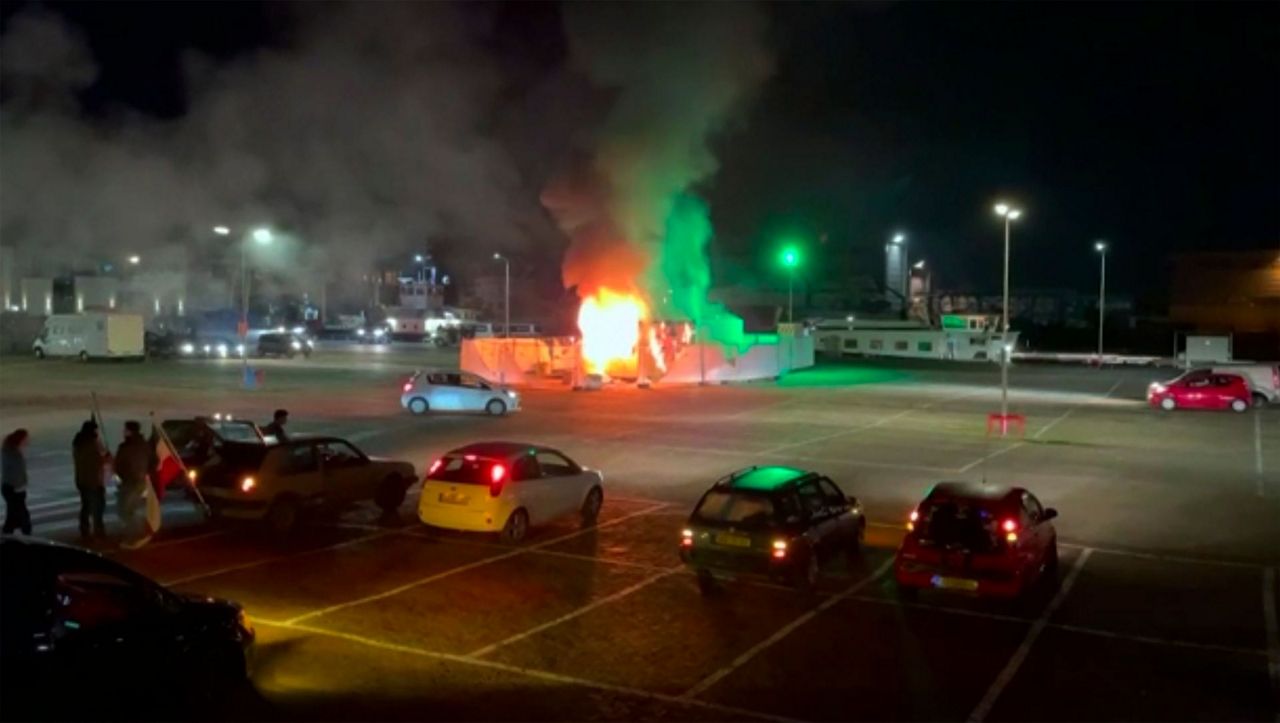 THE HAGUE, Netherlands (AP) — Rioters set fires in the center of the southern Dutch city of Eindhoven and pelted police with rocks Sunday at a banned demonstration against coronavirus lockdown measures, while officers responded with tear gas and water cannons, arresting at least 55 people.

Police in the capital of Amsterdam also used a water cannon to disperse an outlawed anti-lockdown demonstration on a major square ringed by museums. Video showed police spraying people grouped against a wall of the Van Gogh Museum.

It was the worst violence to hit the Netherlands since the pandemic began and the second straight Sunday that police clashed with protesters in Amsterdam. The country has been in a tough lockdown since mid-December that is due to continue at least until Feb. 9. The government beefed up the lockdown with a 9 p.m. to 4:30 a.m. curfew that went into force on Saturday.

“This has nothing to do with demonstrating against corona measures,” Grapperhaus said in a statement. “This is simply criminal behavior; people who deliberately target police, riot police, journalists and other aid workers.”

In Eindhoven, 125 kilometers (78 miles) south of Amsterdam, a central square near the main railway station was littered with rocks, bicycles and shattered glass. The crowd of hundreds of demonstrators also was believed to include supporters of the anti-immigrant group PEGIDA, which had sought to demonstrate in the city.

Eindhoven police said they made at least 55 arrests and warned people to stay away from the city center amid the clashes. Trains to and from the station were halted and local media reported plundering at the station.

A woman not involved in the protests was hospitalized after being injured by a police horse, police said.

Police said more than 100 people were arrested in Amsterdam.

The violence came a day after anti-curfew rioters torched a coronavirus testing facility in the Dutch fishing village of Urk.

Video from Urk, 80 kilometers (50 miles) northeast of Amsterdam, showed youths breaking into the coronavirus testing facility near the village’s harbor before it was set ablaze Saturday night.

The lockdown was imposed by the Dutch government to rein in the spread of the more transmissible variant of the coronavirus.

The police and municipal officials issued a statement Sunday expressing their anger at rioting, “from throwing fireworks and stones to destroying police cars and with the torching of the test location as a deep point.”

“This is not only unacceptable, but also a slap in the face, especially for the local health authority staff who do all they can at the test center to help people from Urk,” the local authorities said, adding that the curfew would be strictly enforced for the rest of the week.

On Sunday, all that remained of the portable testing building was a burned-out shell.