CRIMINAL JUSTICE5 Things to Know about the Central Florida "community bail fund"
CORONAVIRUSFederal health official: You should be more concerned about the flu than coronavirus
ELECTION 2020What ID do I need to bring to the voting booth? Your voting questions answered in our FAQ
ATTRACTIONSWant to stay on top of what's coming to the theme parks? Our Attractions Insider newsletter delivers it to you each week 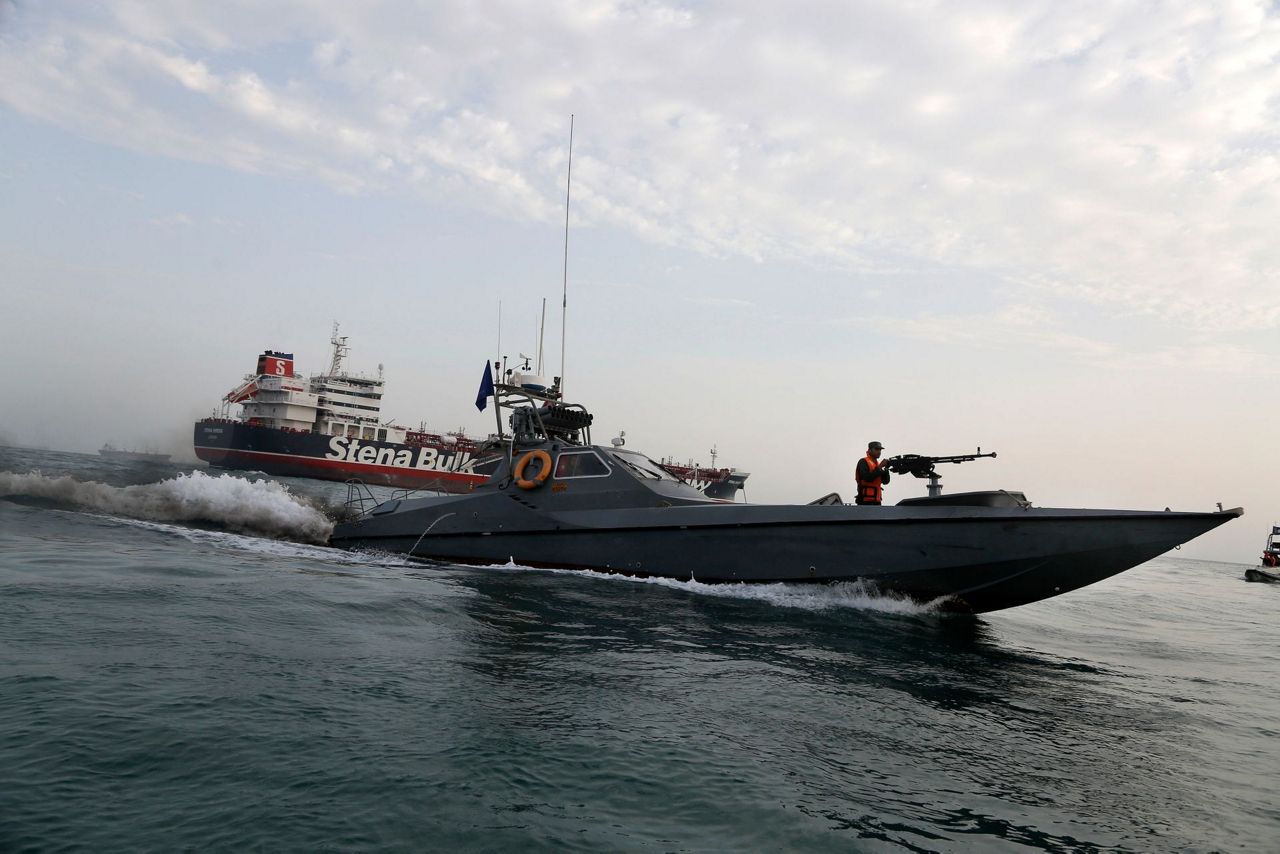 1 of 7
FILE- In this July 21, 2019 file photo, a speedboat of the Iran's Revolutionary Guard moves around a British-flagged oil tanker Stena Impero, which was seized on Friday by the Guard, in the Iranian port of Bandar Abbas. The assault on the beating heart of Saudi Arabia’s vast oil empire follows a new and dangerous pattern that’s emerged across the Persian Gulf this summer of precise attacks that leave few obvious clues of who launched them. (Hasan Shirvani/Mizan News Agency via AP, File) 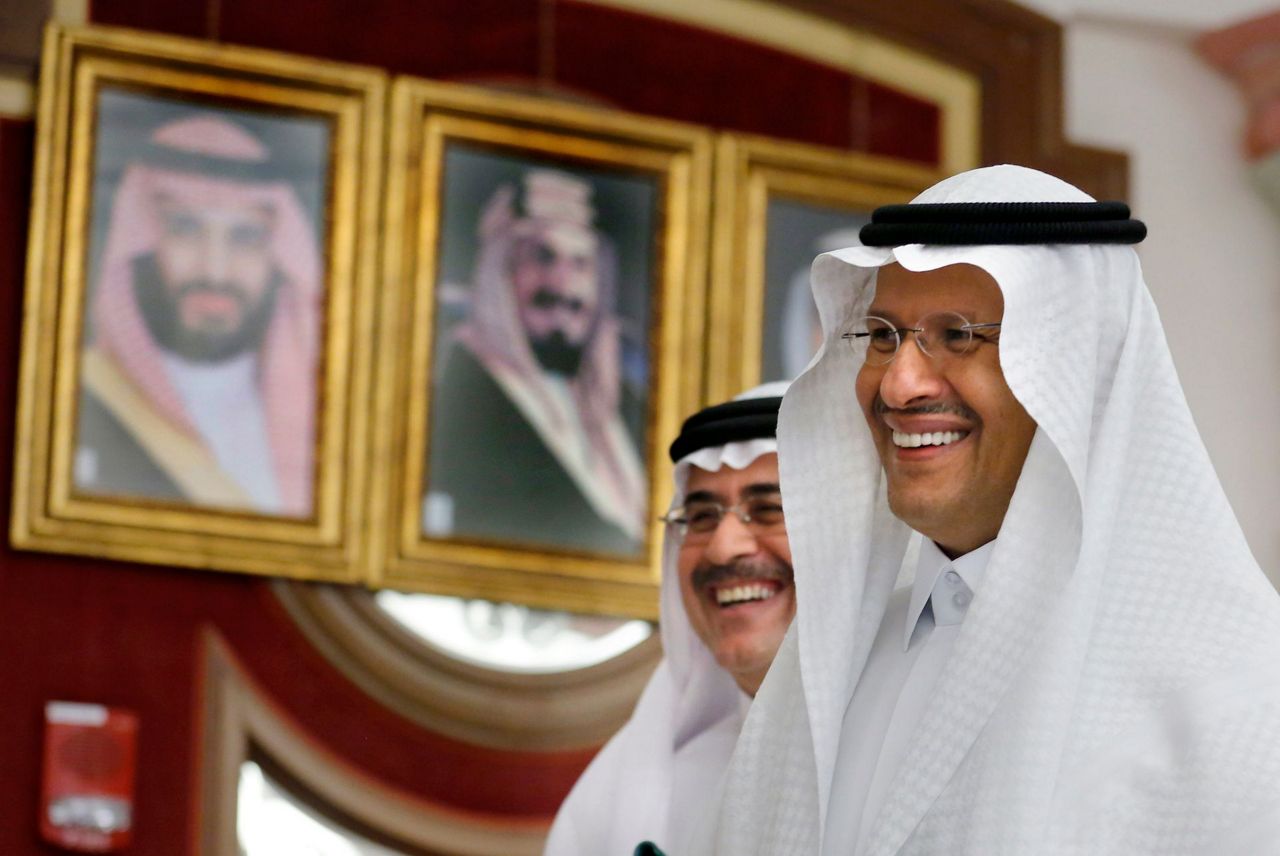 2 of 7
Energy Minister Prince Abdulaziz bin Salman, right, and Aramco CEO Amin Al-Nasser smile as they leave a press conference in Jiddah, Saudi Arabia, Tuesday, Sept. 17, 2019. Saudi Arabia's energy minister said Tuesday that 50% of its daily crude oil production that was knocked out by a weekend attack had been restored and that full production is expected by the end of the month.(AP Photo/Amr Nabil) 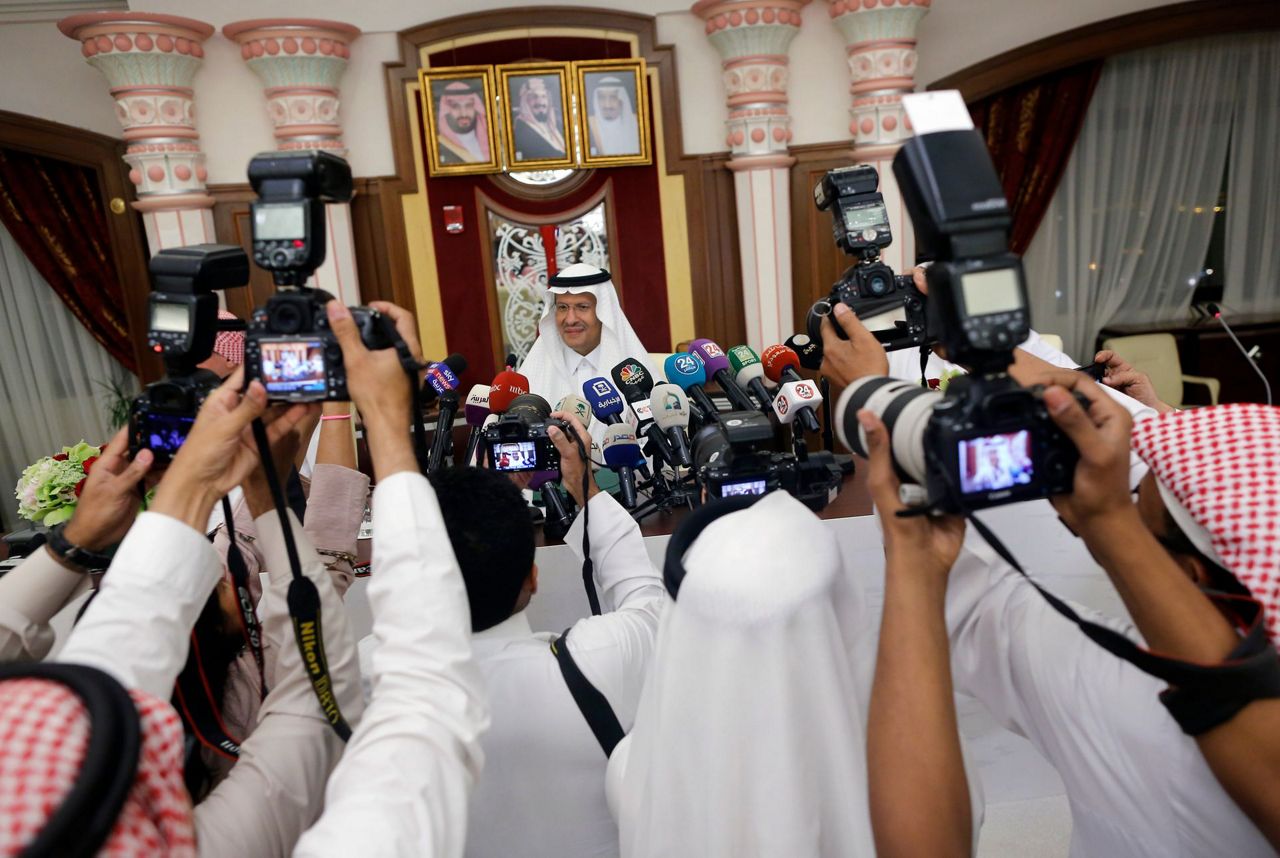 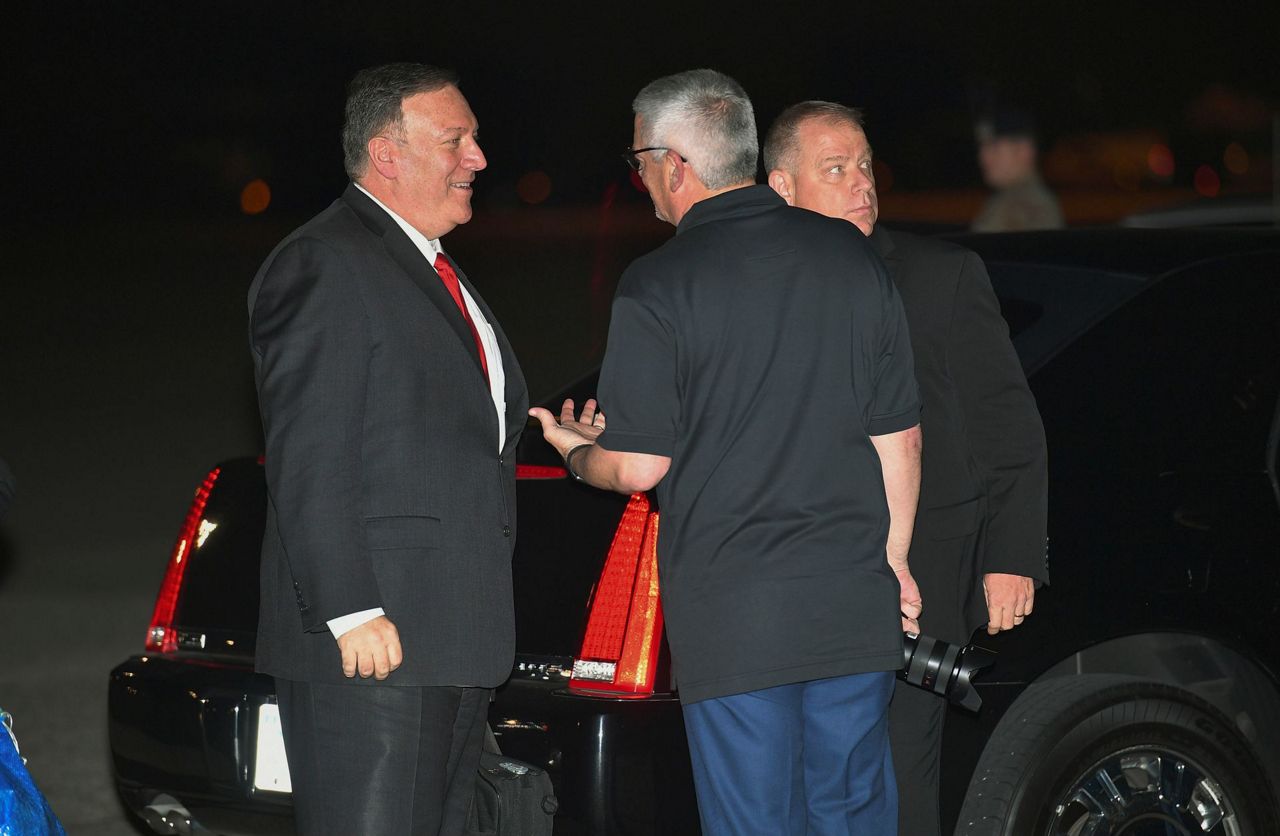 4 of 7
U.S. Secretary of State Mike Pompeo gets ready to board his plane departing from Andrews Air Force Base, Md., Tuesday, Sept. 17, 2019. Pompeo is heading to Saudi Arabia and the United Arab Emirates. (Mandel Ngan/Pool Photo via AP) 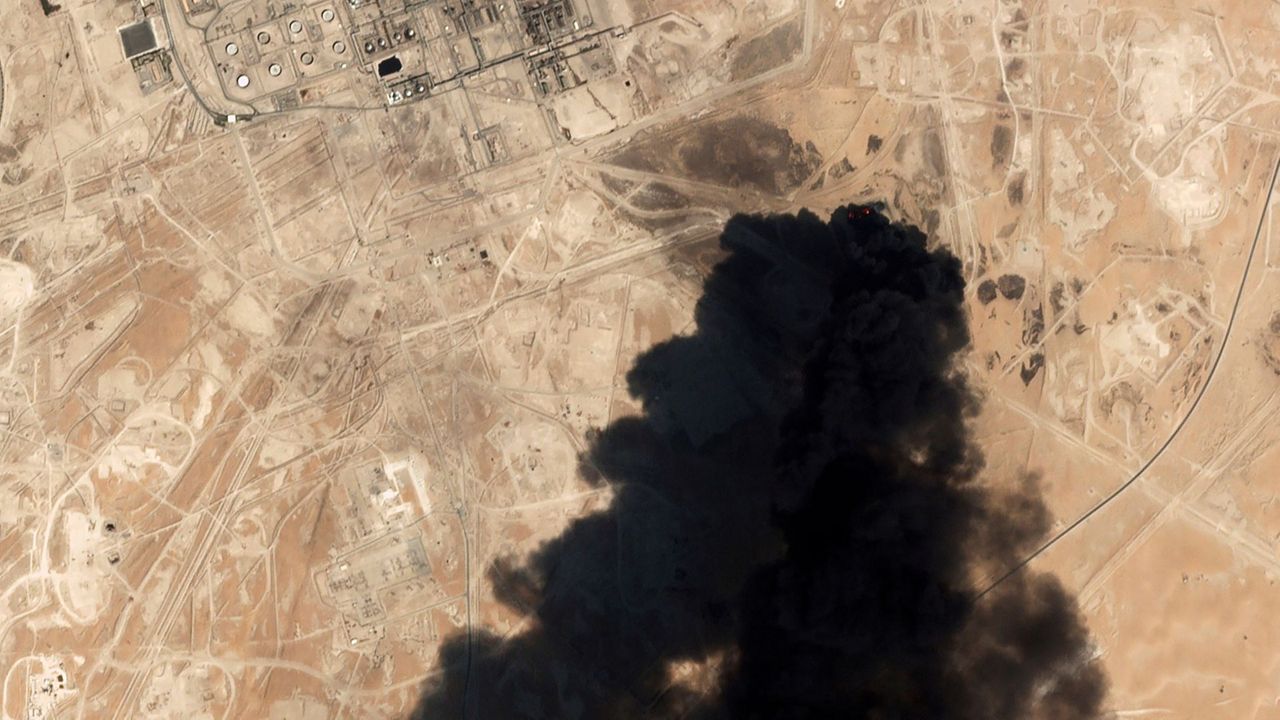 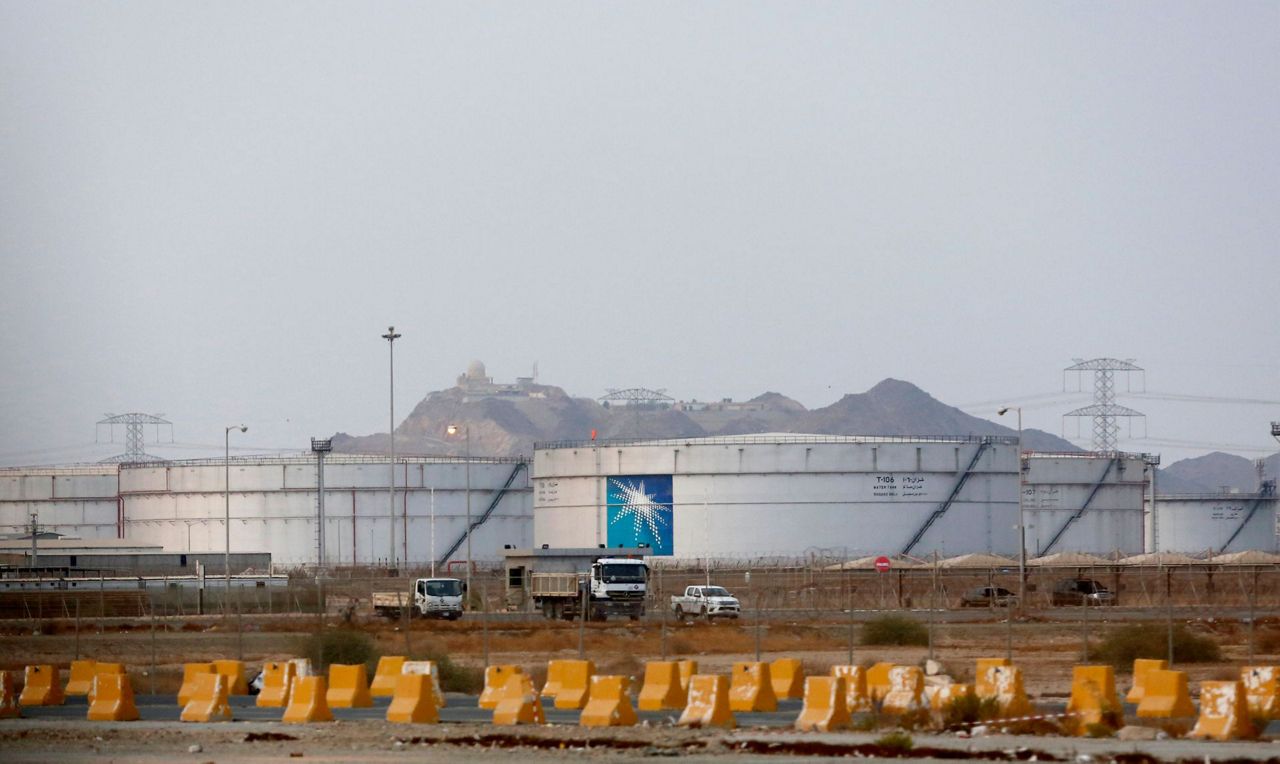 6 of 7
Storage tanks are seen at the North Jiddah bulk plant, an Aramco oil facility, in Jiddah, Saudi Arabia, Sunday, Sept. 15, 2019. The weekend drone attack in Buqyaq on one of the world's largest crude oil processing plants that dramatically cut into global oil supplies is the most visible sign yet of how Aramco's stability and security is directly linked to that of its owner -- the Saudi government and its ruling family. (AP Photo/Amr Nabil) 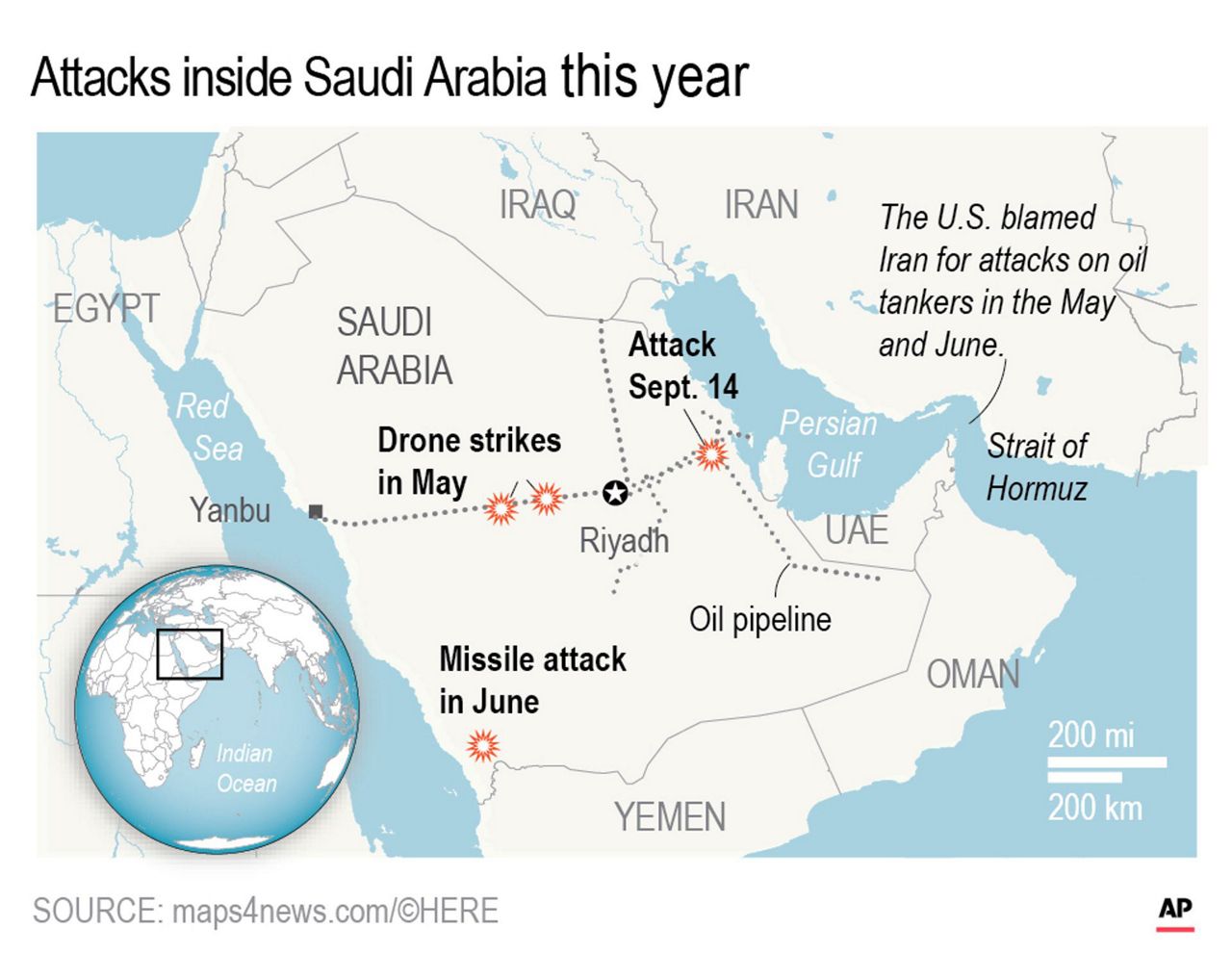 7 of 7
Drone attacks inside Saudi Arabia.;

Iran tells US retaliation looms if targeted for Saudi attack

Iran's president and foreign minister also may not be able to attend next week's high-level meetings at the United Nations as the U.S. has yet to issue them visas, IRNA reported.

The U.N. meeting had been considered as an opportunity for direct talks between Iranian President Hassan Rouhani and President Donald Trump amid a summer of heightened tensions and attacks in the wake of America's unilateral withdrawal from Iran's nuclear deal with world powers a year ago.

However, such talks are increasingly unlikely in the wake of the recent attack in Saudi Arabia, U.S. accusations that Tehran was behind it and hardening comments from Iran. Yemen's Iranian-backed Houthi rebels have claimed the attack in response to the Saudi-led war in Yemen, which has sparked the world's worst humanitarian crisis and killed tens of thousands of people.

Iran sent a note through Swiss diplomats in Tehran on Monday, reiterating that Tehran denies being involved in the Saudi attack, IRNA reported. The Swiss have looked after American interests in Tehran for decades.

"If any action takes place against Iran, the action will be faced by Iran's answer immediately," IRNA quoted the note as saying. It added that Iran's response wouldn't be limited to the source of the threat, suggesting it would inflict damage beyond what it had suffered.

IRNA separately reported Wednesday that Iran's first delegation for the annual U.N. event had not left Iran due to not having visas. Foreign Minister Mohammad Javad Zarif was to travel to New York on Friday, with Rouhani following Monday, according to the agency.

As the host of the U.N.'s headquarters, the U.S. is mandated to offer world leaders and diplomats visas to attend meetings there. But as tensions have risen, the U.S. has put increasing restrictions on Iranians like Zarif. Since becoming Iran's president in 2013, Rouhani has spoken each year at the General Assembly.

The U.S. State Department did not respond to requests for comment Wednesday.

U.S. Secretary of State Mike Pompeo is traveling to Saudi Arabia for meetings after Saturday's attack, which hit a Saudi oil field and the world's largest crude oil processing plant. The Saudi military planned to speak to journalists Wednesday in Riyadh to discuss their investigation "and present material evidence and Iranian weapons proving the Iranian regime's involvement."

"Almost certainly it's Iranian-backed," Prince Khalid bin Bandar, Saudi Arabia's ambassador to the United Kingdom, told the BBC. "We are trying not to react too quickly because the last thing we need is more conflict in the region."

Meanwhile, the state-run Saudi Press Agency carried a statement Wednesday saying the kingdom had joined a U.S.-led naval coalition to secure the Mideast's waterways. Australia, Bahrain and the United Kingdom already have joined the mission.

Cmdr. Joshua Frey, a spokesman for the U.S. Navy's 5th Fleet, declined to comment on the Saudi announcement, saying it "would be inappropriate to comment on the status of individual nations and the nature of any potential support."

The coalition aims to secure the broader Persian Gulf region. It includes surveillance of the Strait of Hormuz, the narrow mouth of the Persian Gulf through which a fifth of the world's oil travels, and the Bab el-Mandeb, another narrow strait that connects the Red Sea and the Gulf of Aden off Yemen and East Africa.

The U.S. blames Iran for the apparent limpet mine explosions on four vessels in May and another two in June sailing in the Gulf of Oman near the Strait of Hormuz, something Iran denies being behind. Iran also seized a British-flagged oil tanker and another based in the United Arab Emirates after the British seized a tanker carrying Iranian oil.

In Tehran, Rouhani told his Cabinet that Saudi Arabia should see the weekend attack as a warning to end its war in Yemen, where it has fought the Houthi rebels since 2015 and sought to restore the internationally recognized government.

Rouhani said Yemenis "did not hit hospitals, they did not hit schools or the Sanaa bazaar," referring to the Saudi-led coalition's widely criticized airstrikes on civilian targets.

He added that Iran does not want conflict in the region, but it was the Saudi-led coalition that "waged the war in the region and ruined Yemen." Saying the Houthis were responsible for the drone strikes, he said: "They attacked an industrial center to warn you. Learn the lesson from the warning."

Iran's defense minister, Gen. Amir Hatami, also denied his country launched the attack, saying the Houthis had the capability to launch the assault.

Wednesday's announcements come after Saudi Arabia's energy minister said late Tuesday that more than half of the country's daily crude oil production that was knocked out by an attack had been recovered. He said production capacity at the targeted plants would be fully restored by the end of the month, in part by drawing from Saudi reserves of crude oil.

Pompeo was due to land in the Red Sea city of Jiddah, where he was scheduled to meet with Saudi Crown Prince Mohammed bin Salman. Pompeo will later travel to the United Arab Emirates on Thursday to meet with Abu Dhabi's powerful crown prince, Sheikh Mohammed bin Zayed Al Nahyan. Both nations are U.S. allies and have been fighting against the Houthis in Yemen.

Marine Gen. Joseph Dunford, chairman of the Joint Chiefs of Staff, said Tuesday that U.S. military experts were in Saudi Arabia working with their counterparts to "do the forensics on the attack" — gleaning evidence that could help build a convincing case for where the weapons originated.

On Wednesday, French President Emmanuel Macron's office announced experts from his nation would be traveling to Saudi Arabia to help the kingdom shed light "on the origin and methods" of the attacks. France has been trying to find a diplomatic solution to the tensions between Iran and the U.S., so any conclusion they draw could be used as a third-party assessment of what happened.