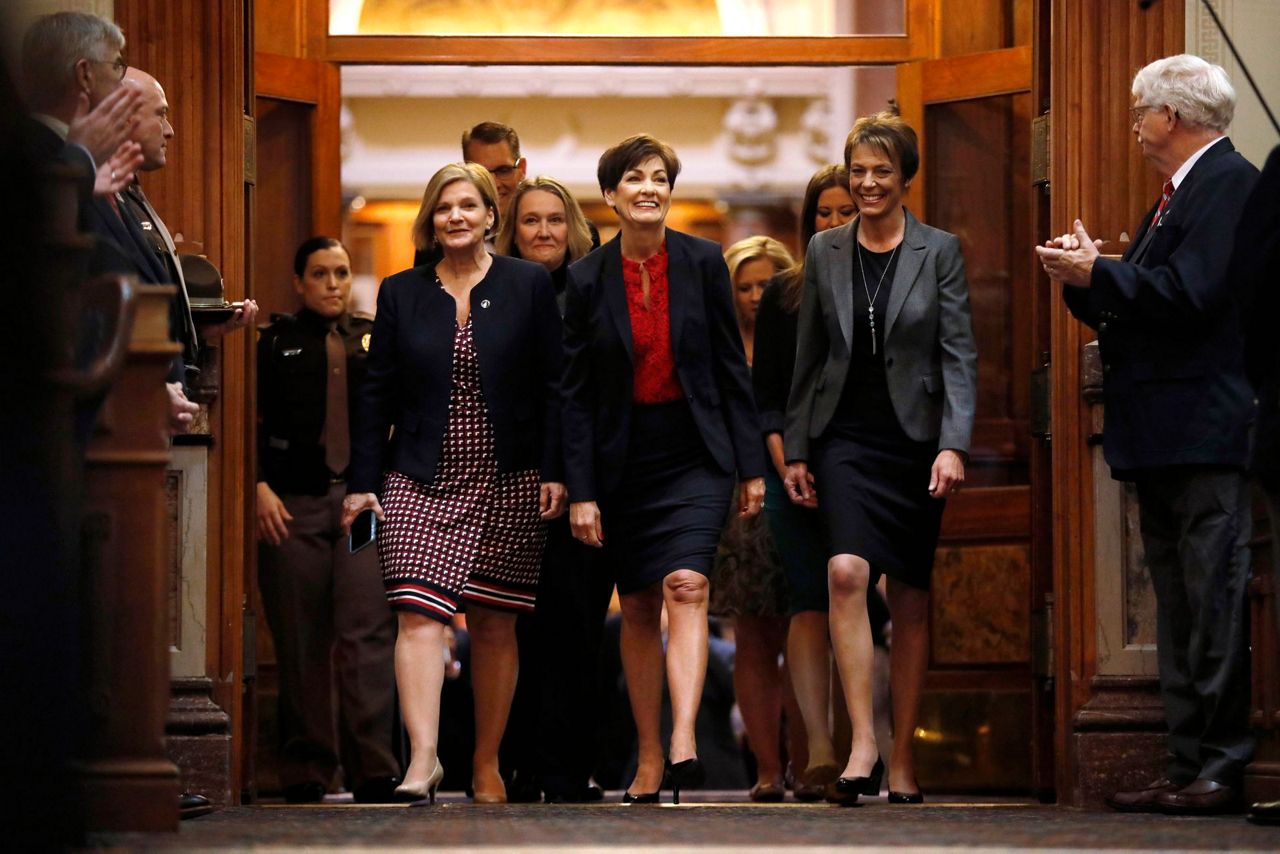 Nominate a woman? Some Democratic women aren't so sure

TIPTON, Iowa (AP) — Iowa voters sent a record number of women to the Legislature during last year's midterms. Women won two of the state's most competitive U.S. House races, and a woman was elected governor for the first time.

Yet across Iowa, there's palpable anxiety among some Democratic women about nominating a female candidate to face off against President Donald Trump next year.

"I want to be for a woman, but it's just hard when you see a lot of other people not supporting women yet. I feel that America's just not there yet," said Wendy McVey, a 20-year-old junior at Iowa State University who is most interested in Beto O'Rourke, a former Texas congressman.

And it's not just Iowa.

Across Iowa, New Hampshire and South Carolina, three of the first states to hold 2020 nominating contests, dozens of women told The Associated Press that they are worried about whether the country is ready to elect a woman as president. Their concerns are political and personal, rooted as much in fear of repeating Hillary Clinton's 2016 loss to Trump as in their own experiences with sexism and gender discrimination.

These worries have created a paradox for Democrats.

Women are among the party's most energized and engaged voters, accounting for more than half the electorate in the 2018 midterms. Democrats sent a historic number of women to Congress last year and have a record number of women running for president, including Sens. Kamala Harris of California, Elizabeth Warren of Massachusetts, Amy Klobuchar of Minnesota and Kirsten Gillibrand of New York.

But the Oval Office has been elusive, and given Democrats' deep desire to oust Trump, some don't want to take any chances with their nominee.

"I think a lot of people voted for him because they didn't want to vote for her," Katrina Riley, a 69-year-old from Summerville, South Carolina, said of the 2016 contest between Trump and Clinton. "And I don't want that to happen again."

"I fear for that with women, that it's, 'Well, we had our chance. We had Hillary. Hillary didn't pan out. Best to just pick another 65-year-old plus white guy who has the best chance of winning,'" Slottje said.

Amanda Hunter, research and communications director at the Barbara Lee Foundation, which studies how female candidates are perceived in politics, said women face particular challenges when running for president that they don't at the local level.

"We know that it's one thing to support women as a decision-maker as part of a legislative body, but if she's the decision-maker, voters need to be that much more convinced that she's up to the job," she said. "Men can put out their resume. Women have to justify over and over what they've accomplished."

A Pew Research Center report from 2018 backs up that assessment. According to the survey, 76% of women said a major reason why there are fewer women in office is that women have to do more to prove themselves. About 60% of women said they believe gender discrimination is an obstacle, and 57% of women said they didn't believe Americans were ready to elect a woman to higher office.

"I feel like we ourselves have lived in a country where women's power and leadership has been so absent," said Cecile Richards, the former president of Planned Parenthood. "I think it's hard even for women to imagine a future of real equity but I think that time has come."

Advisers to some of the women in the crowded Democratic field said early polling and focus groups have revealed similar concerns among voters about electing a woman. "A Hillary hangover," one said.

In focus groups, women have said they want a candidate who can go toe-to-toe with Trump on a debate stage. Despite the fact that Clinton was broadly seen as the better prepared candidate in her three debates with Trump, some women have said the moment they remember most was Trump looming over Clinton and following her as she walked across the stage.

Jennifer Palmieri, who advised Clinton's 2016 campaign, urged women to "not be scared of the 2016 phantoms."

"Women voters who want to support a woman candidate should not overthink this but have courage of their convictions and believe in their power to make a difference," Palmieri said. "That's what women did in 2018 and look what happened."

In the aftermath of the 2016 election, Clinton has said she believes sexism and misogyny contributed to her loss. Some of the women in the 2020 race haven't shied away from those issues.

Warren recounts becoming a teacher but not being "asked back" to work the next year by the principal after she became pregnant. She makes subtle references to some of the sexism she's faced on Capitol Hill.

At a Friday event in Tipton, Iowa, she told the crowd that when she talks to colleagues in the Senate, they tell her "you're asking for too much" with her campaign platform.

"Don't ask for such hard things. Smile more," she said she's been told, using language familiar to many women.

The crowd erupted in boos and groans.

This story has been corrected to reflect that Buttigieg is mayor of South Bend, Indiana.