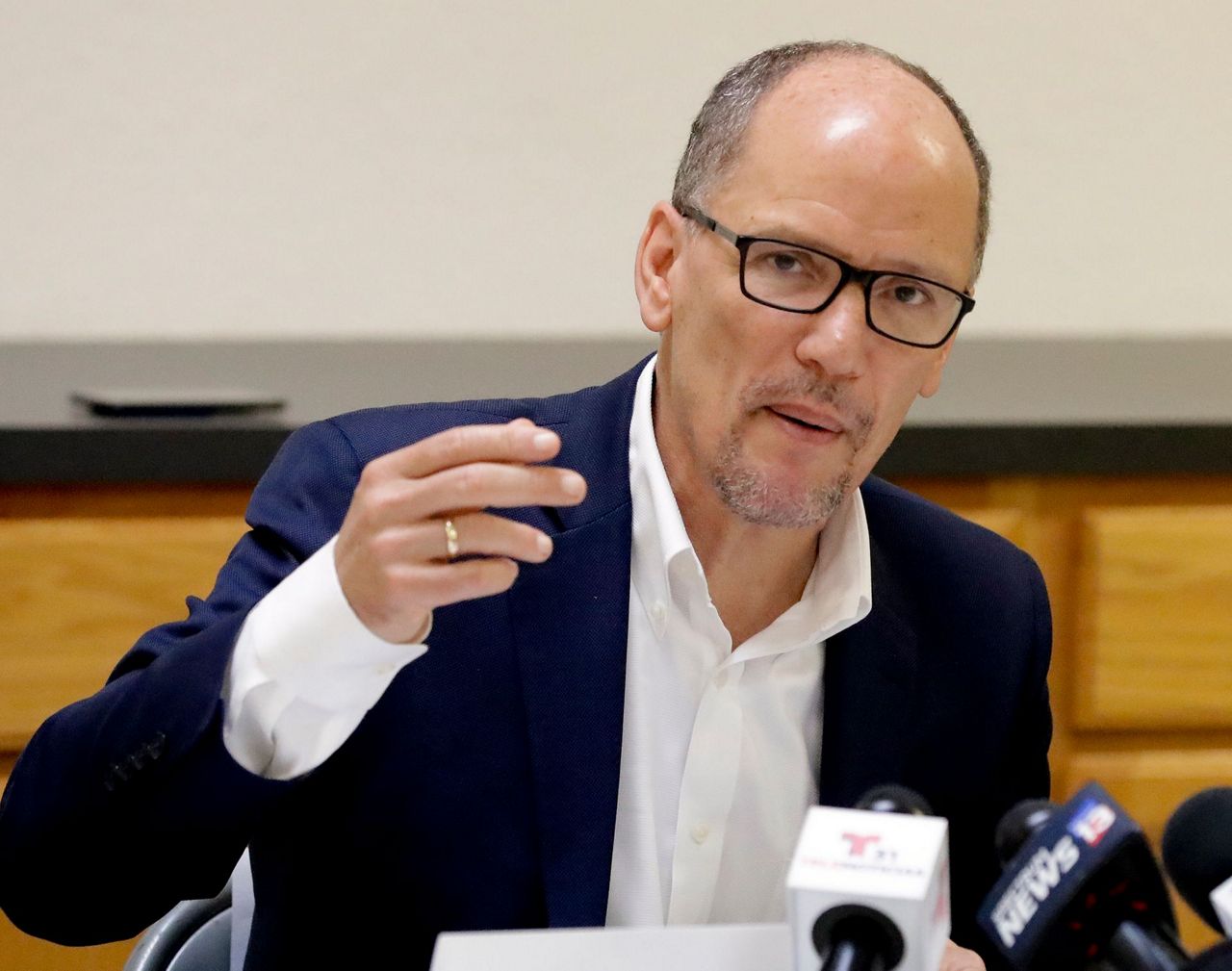 FILE - In this May 30, 2018, file photo Democratic National Committee Chair Tom Perez speaks in Orlando, Fla. Democrats will hold at least a dozen presidential primary debates starting in June 2019 and running through April 2020, with party Chairman Perez promising rules that will give everyone in a potentially large field a fair shot at voters' attention.(AP Photo/John Raoux, file)

Democrats will hold at least a dozen presidential primary debates starting in June 2019 and running through April 2020, with party Chairman Tom Perez promising rules that will give everyone in a potentially large field a fair shot at voters' attention.

Making public his first in a series of decisions on the 2020 debate calendar, Perez said Thursday that the national party will sponsor six debates in 2019 and six more in 2020. That could be extended if the nomination process drags deep into the spring.

The first two debates in June and July will have two rounds, possibly over two nights, to accommodate what is expected to be an unwieldy field. Candidates will be assigned at random, Perez said, to avoid the party picking and choosing who is a top-tier contender, as Republicans did during their 2016 primary debates.

"Democrats want to put our eventual nominee in the strongest position possible to defeat Donald Trump," Perez said. He said officials have "listened to voices across our party about how we can make the primary process better" and set rules that "will help every candidate feel like they got a fair shake."

National figures like former Vice President Joe Biden and Sens. Elizabeth Warren of Massachusetts, Bernie Sanders of Vermont, Kamala Harris of California and Cory Booker of New Jersey likely would have no trouble qualifying for the debate stage regardless of the rules.

But for upstart candidates, from governors and mayors to little-known members of Congress, getting a slot in the initial debates could be a make-or-break opportunity. One such candidate, Rep. John Delaney of Maryland, has already invested considerable time and money in Iowa and New Hampshire. In a statement Thursday, he called it "encouraging that the DNC is really embracing a fair process."

From the outset, Perez and Cahill stated a determination to avoid charges of favoritism that dogged Democratic nominee Hillary Clinton in 2016, in part because of the debate schedule established by then-Democratic National Committee Chairwoman Debbie Wasserman Schultz.

In the last election cycle, Wasserman Schultz did not commit to an initial six debates until May 2015; the first debate wasn't held until that October. Democrats had a total of nine debates in that primary fight, not counting additional forums.

Perez also has used Republicans' 2016 experience as a guide. Then GOP-Chairman Reince Priebus sanctioned 12 debates for a field of 18 candidates, beginning in August. Some early debates featured two stages on the same night, but the GOP divided the field into essentially a varsity lineup and a junior varsity group of longshots.

"Drawing lots strikes me as the fairest way to ensure everyone gets a fair shake," Perez said.

Perez committed to using qualifying thresholds beyond polling for at least the June and July debates. As an example, he cited grassroots fundraising. Party officials involved in debate discussions have also mentioned metrics such as the number of field offices in the early voting states.

Top Democrats also said that the two-stage approach and expansive qualifying thresholds could conceivably be extended to later debates if the field remains too large for one stage.

Perez did not say precisely how many candidates he believes is too large for one stage, though he referred to "a double-digit field" when discussing the June and July sessions. Details of the debates ultimately must be hammered out with the co-sponsoring television networks that pay for the events, but Perez and other Democratic officials have said the networks appear amenable to the party's ideas.

The party will not bar candidates from participating in other forums, Perez said, referring to events that may feature multiple candidates but not have them on stage at the same time to interact with one another.

Perez said that while the traditional first four states will not host debates in 2019, he would not restrict early debates in states like California that are holding March primaries with mail ballots going out even as Iowans are gathering for the first caucus.