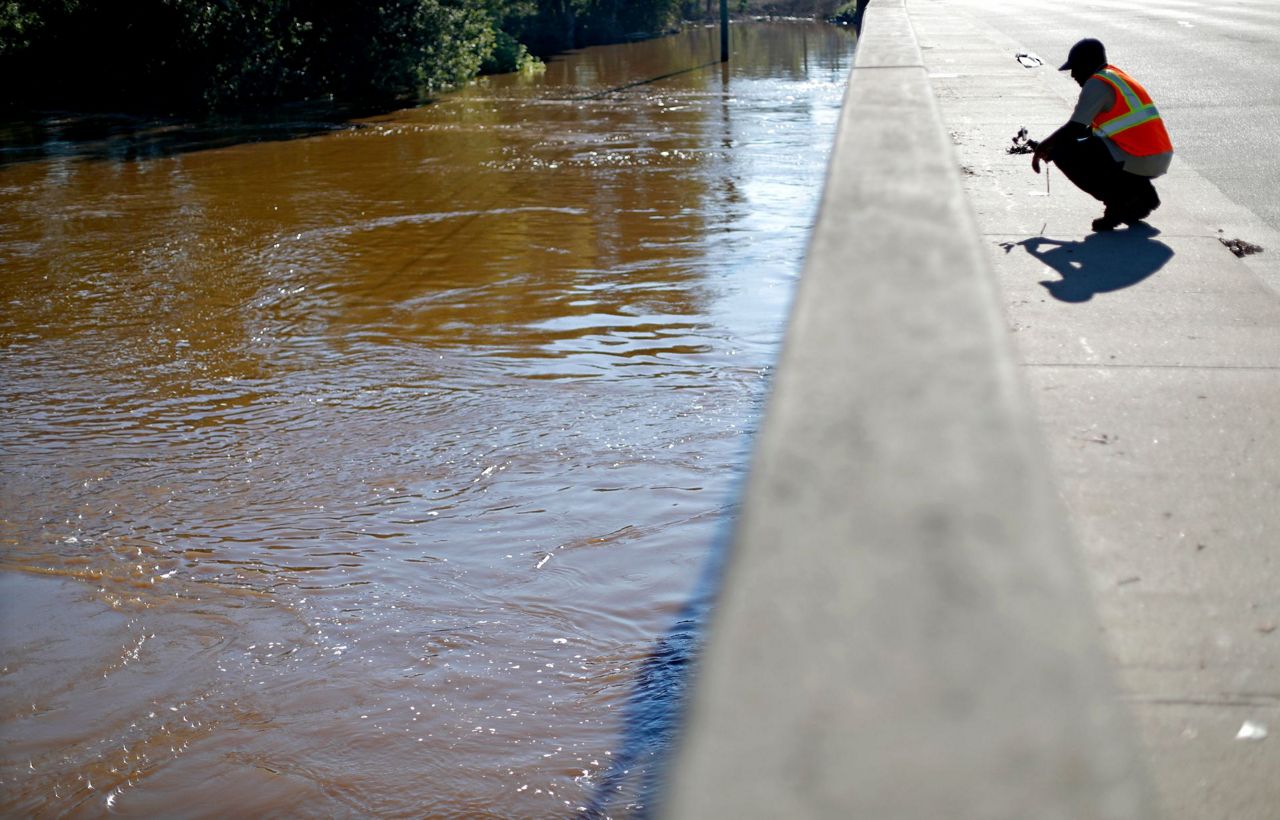 1 of 18
Maine Johnson with the city's communications department, takes photos of the Cape Fear River after its projected time of cresting in Fayetteville, N.C., Wednesday, Sept. 19, 2018. (AP Photo/David Goldman) 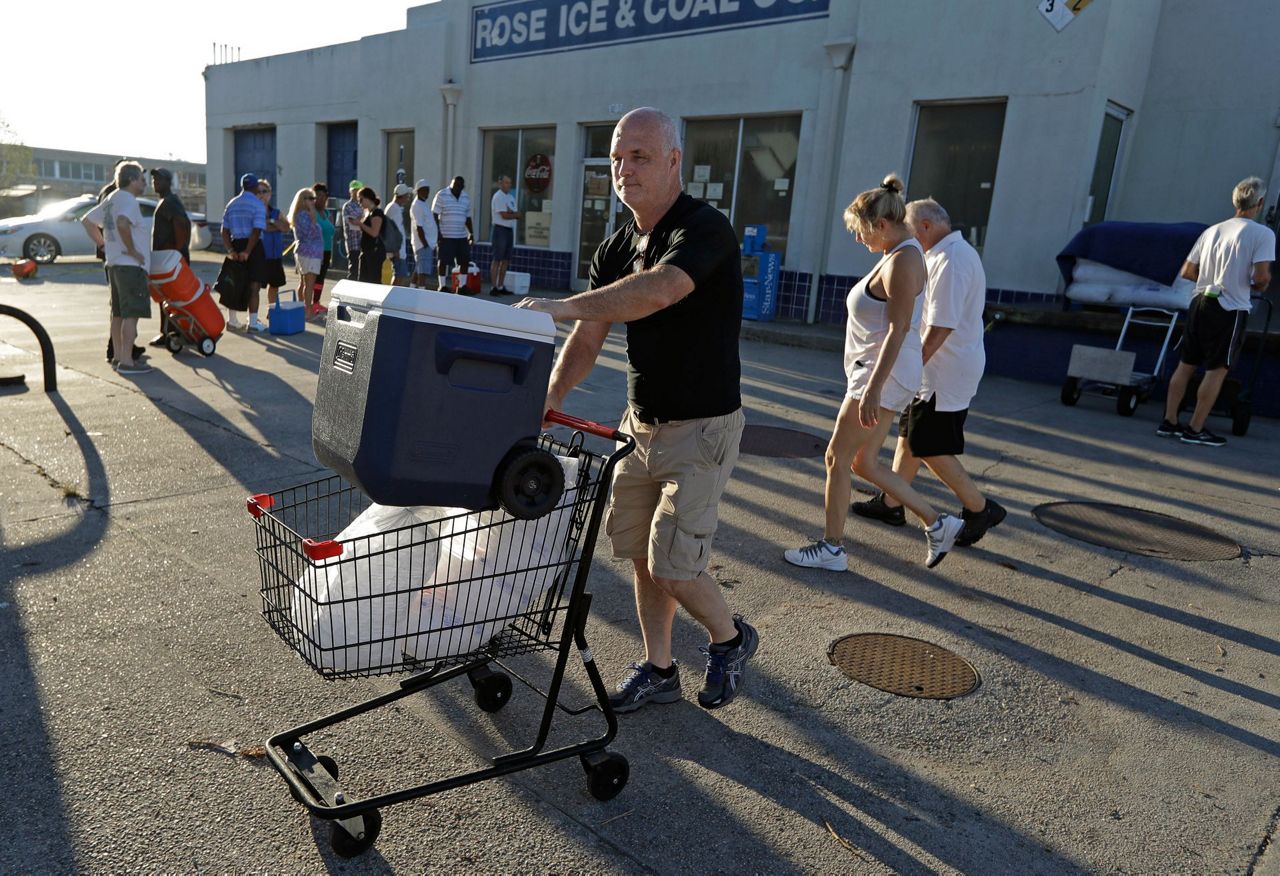 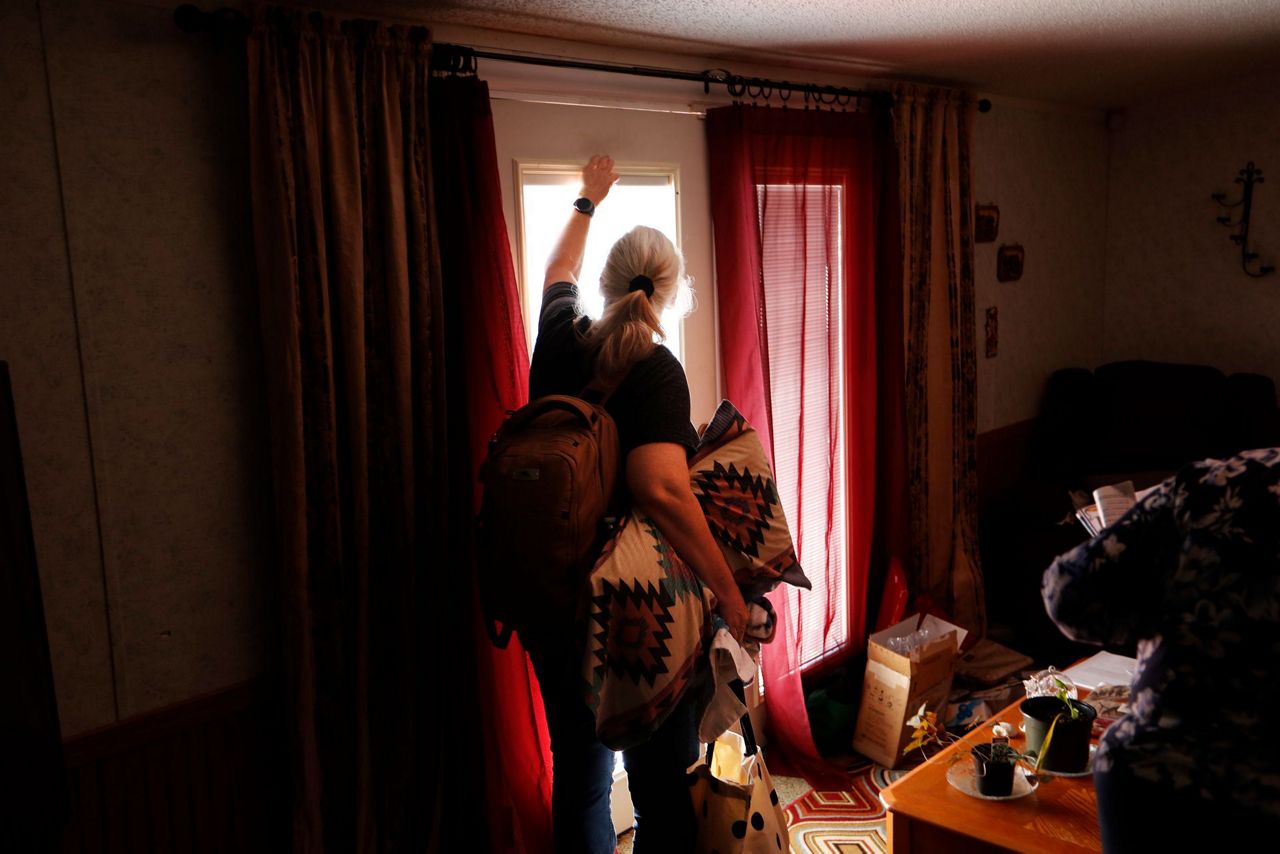 3 of 18
Debra Wolf pulls back the curtains upon returning from a shelter to her home which narrowly escaped flood damage along the Cape Fear River in Linden, N.C., Wednesday, Sept. 19, 2018. (AP Photo/David Goldman) 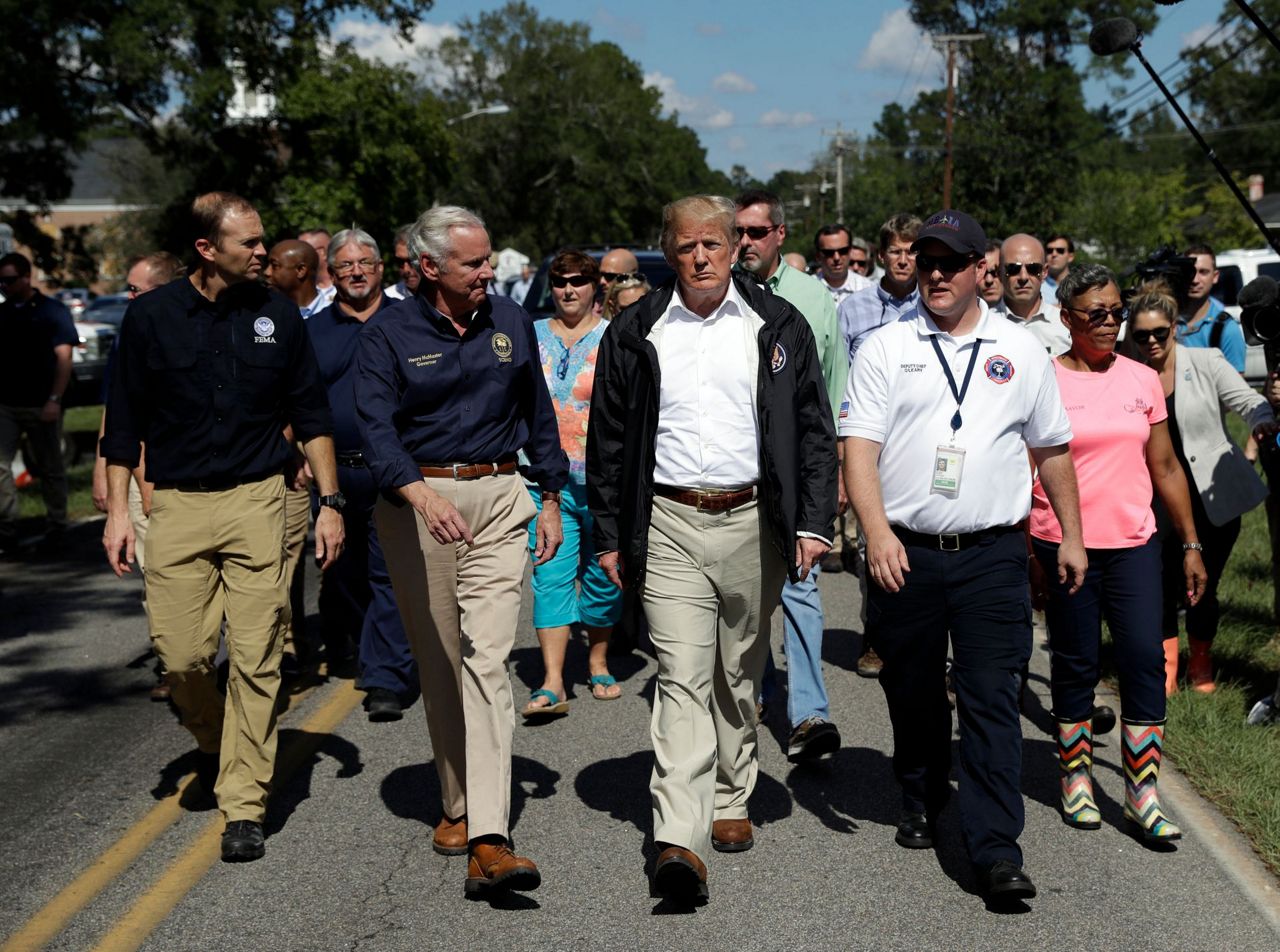 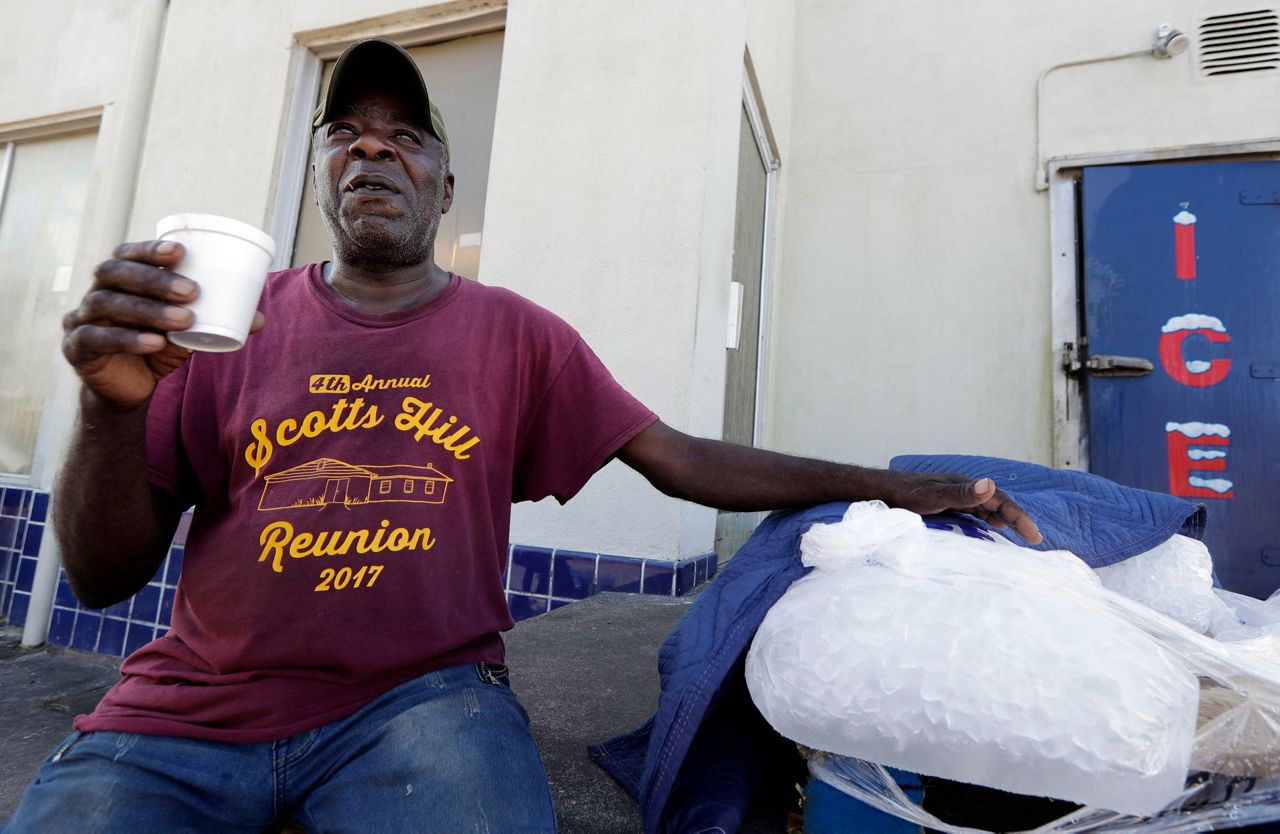 5 of 18
Ralph Nixon drinks a cup of coffee as he takes a break from helping customers at Rose Ice & Coal purchase ice in Wilmington, N.C. Wednesday, Sept. 19, 2018. (AP Photo/Chuck Burton) 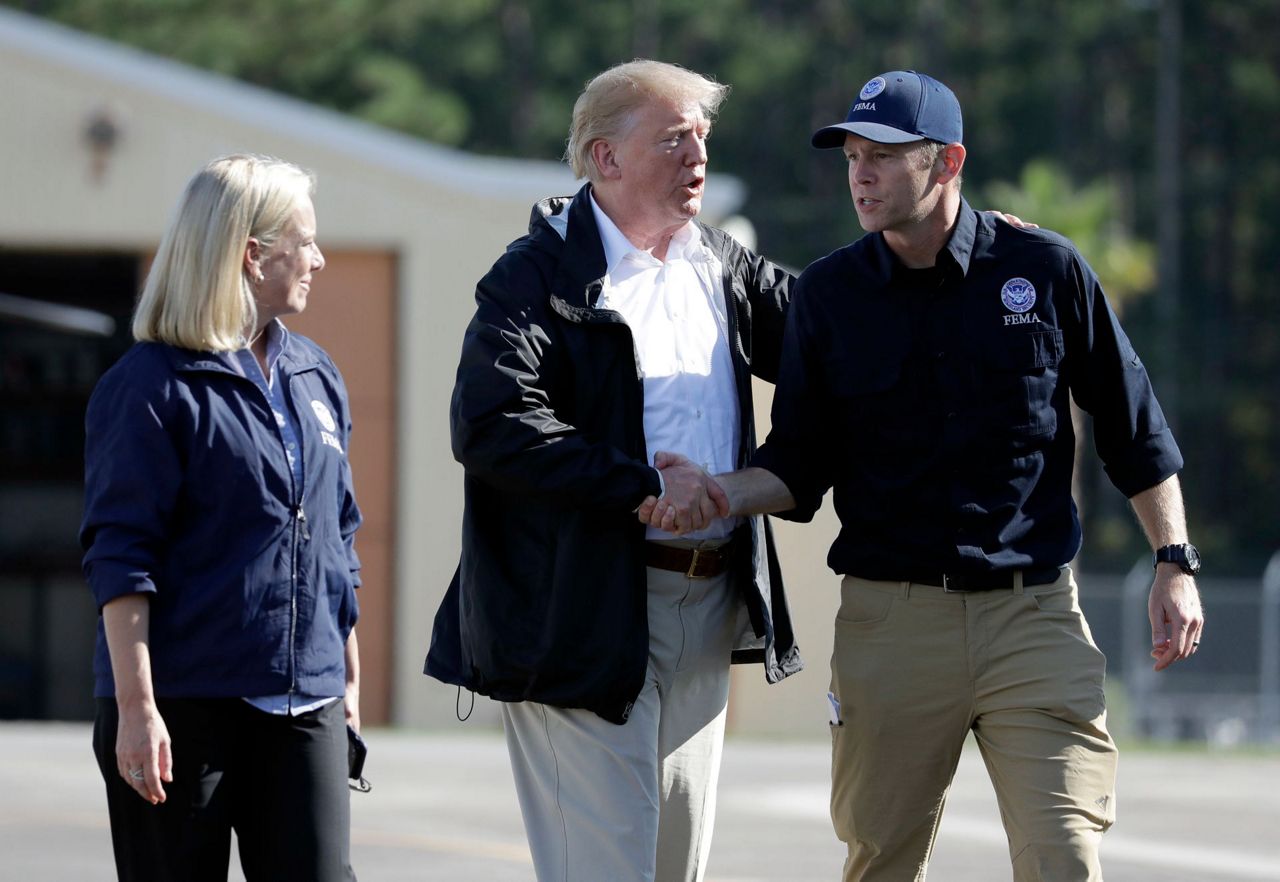 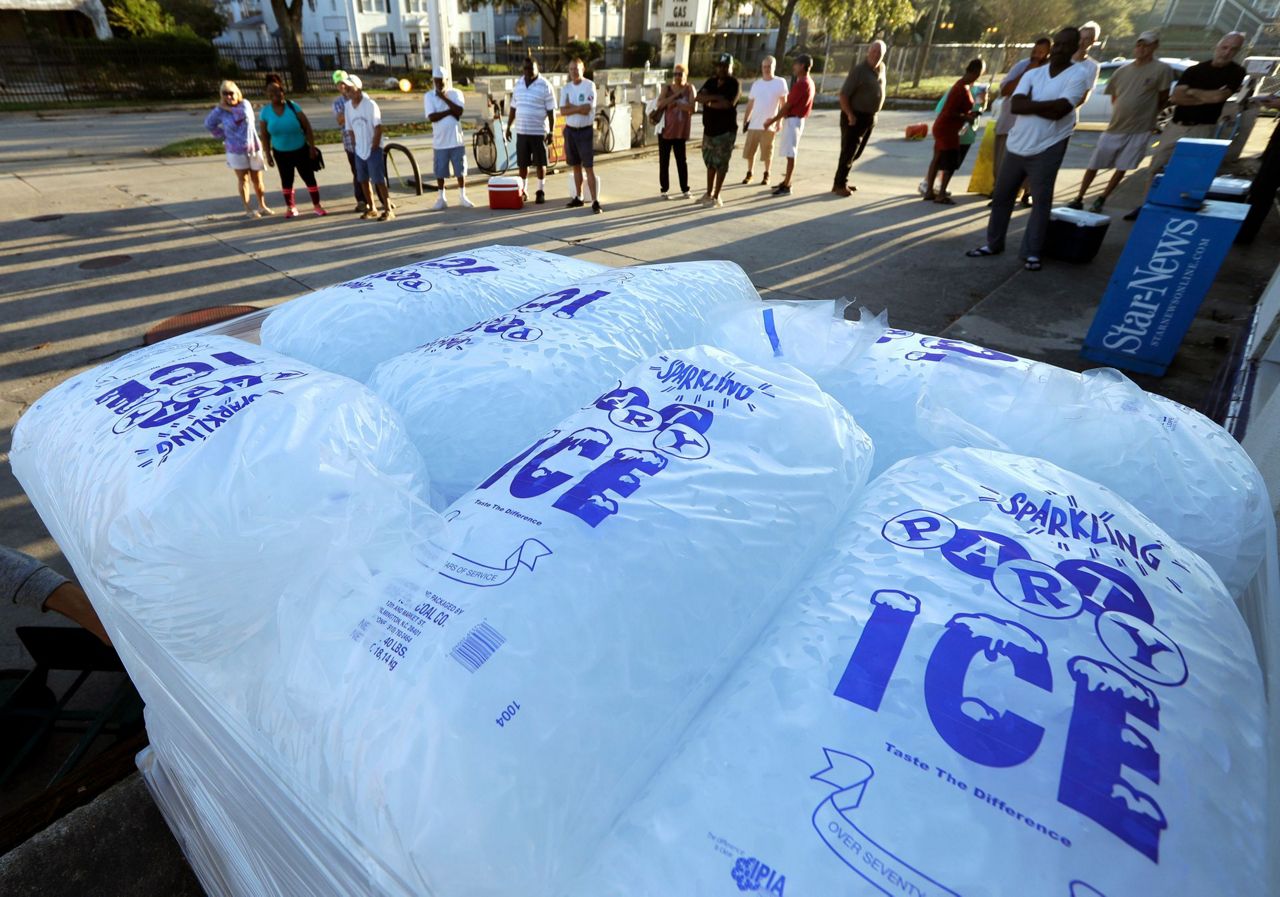 7 of 18
People begin to form a line as they wait outside Rose Ice & Coal for it to open days after Hurricane Florence in Wilmington, N.C., Wednesday, Sept. 19, 2018. (AP Photo/Chuck Burton) 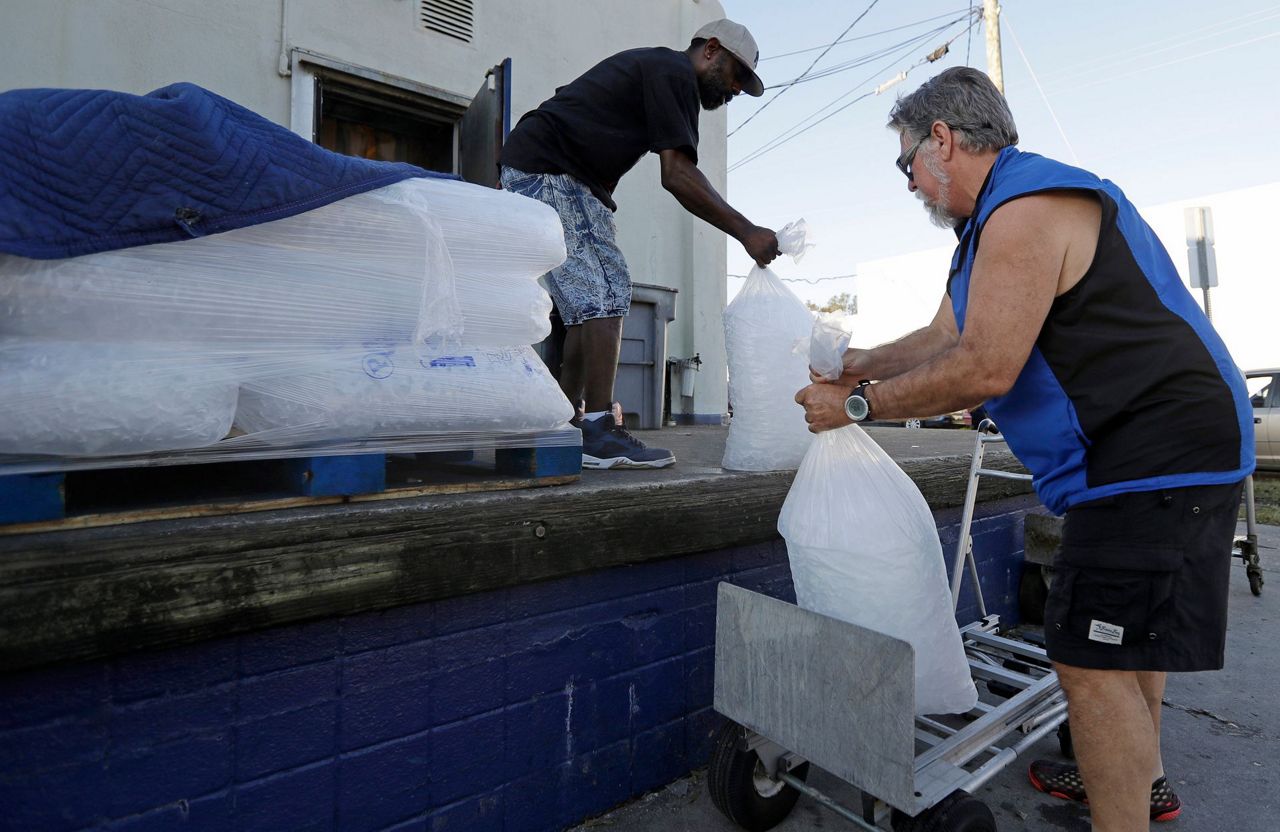 9 of 18
In this combination of photos, Cape Fear River flows under the Person Street bridge on Sept. 15, 2018, left, and on Sept. 19, 2018, in the aftermath of Hurricane Florence in Fayetteville, N.C. (AP Photo/David Goldman) 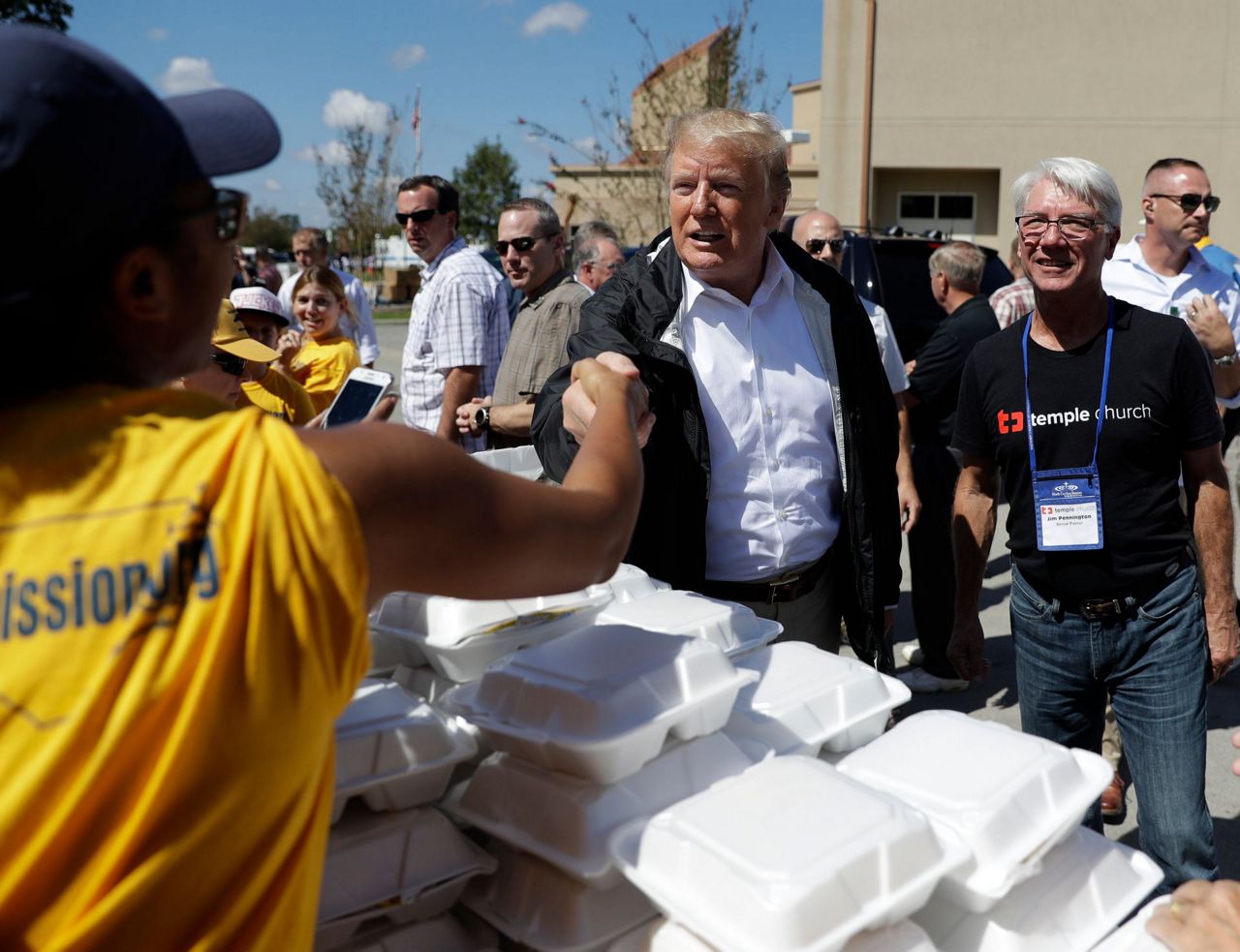 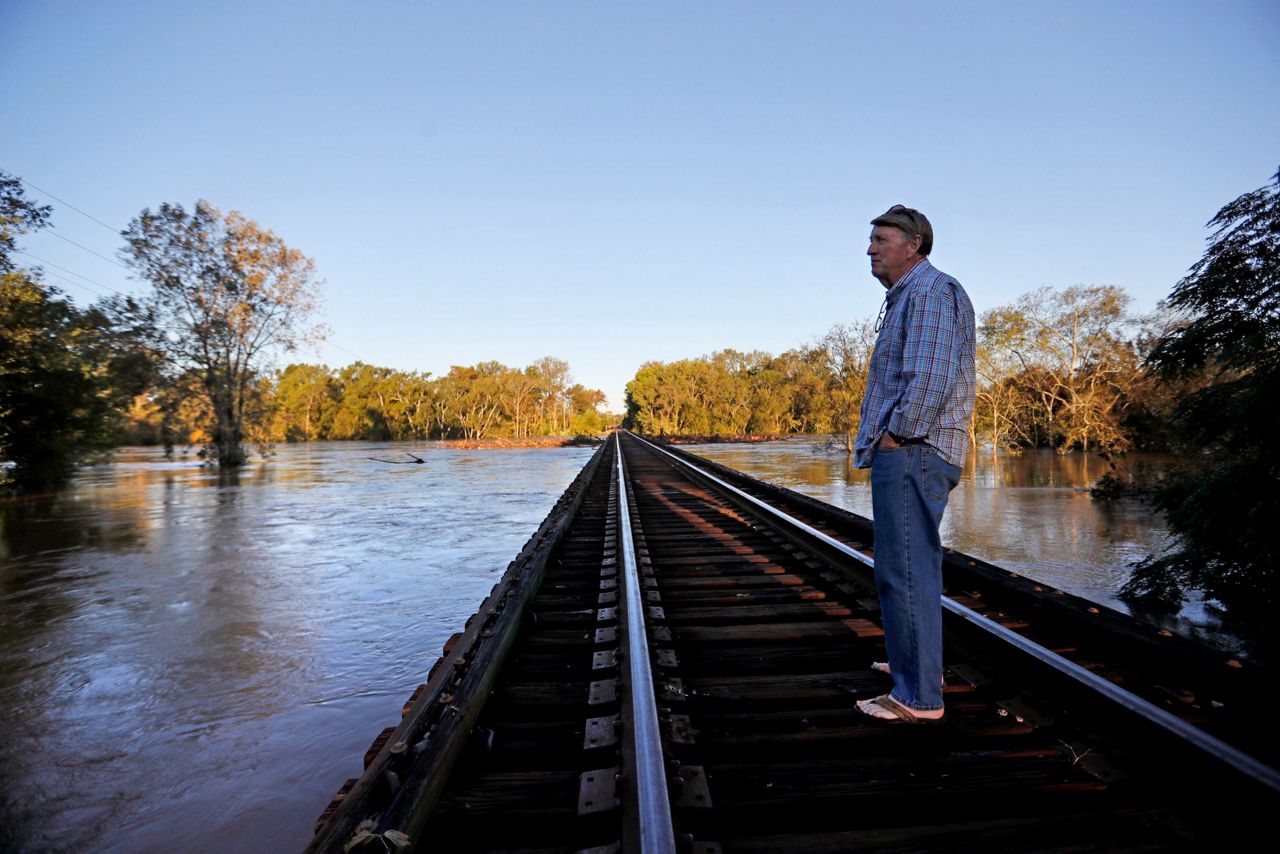 11 of 18
Charles Gardner checks the level of the Cape Fear River near his property after its projected time of cresting in Fayetteville, N.C., Wednesday, Sept. 19, 2018. (AP Photo/David Goldman)

13 of 18
In this combination of photos, the Cape Fear River flows under the Grove Street bridge in the background on Sept. 16, 2018, left and on Sept. 19, 2018, in the aftermath of Hurricane Florence in Fayetteville, N.C. (AP Photos/David Goldman) 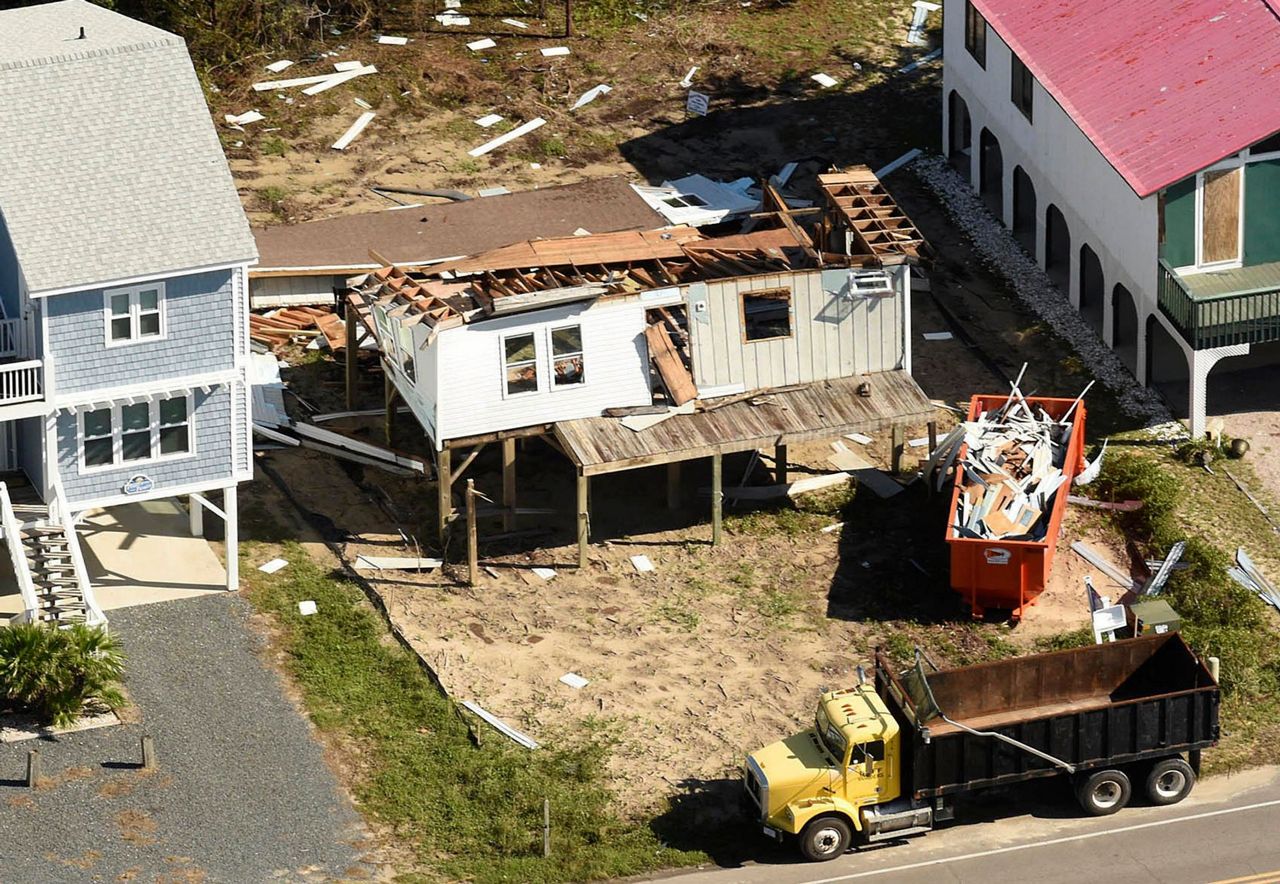 16 of 18
Aerial views of a home along Oak Island that lost its roof Wednesday Sept. 19, 2018 in Oak Island, N.C. after Hurricane Florence moved through the area earlier in the week..(Ken Blevins/The Star-News via AP) 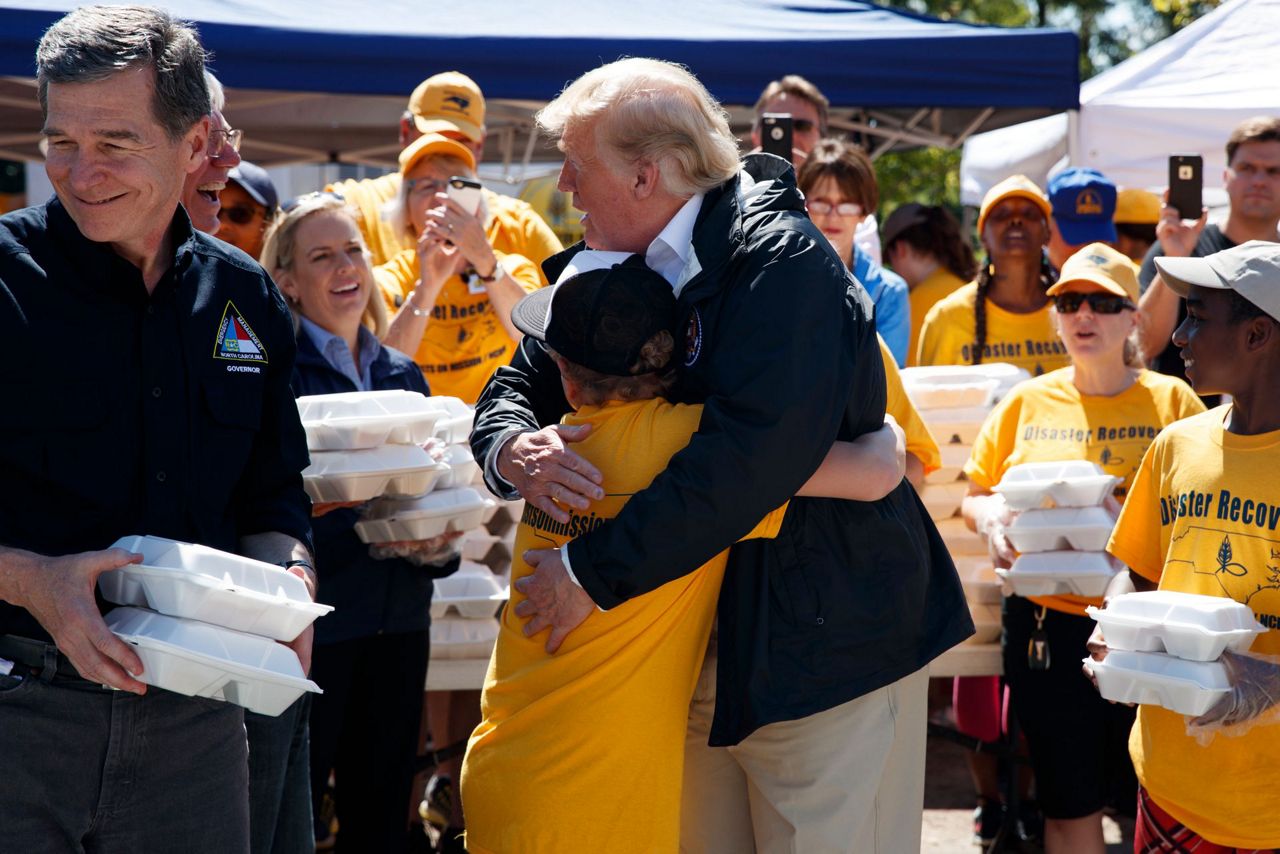 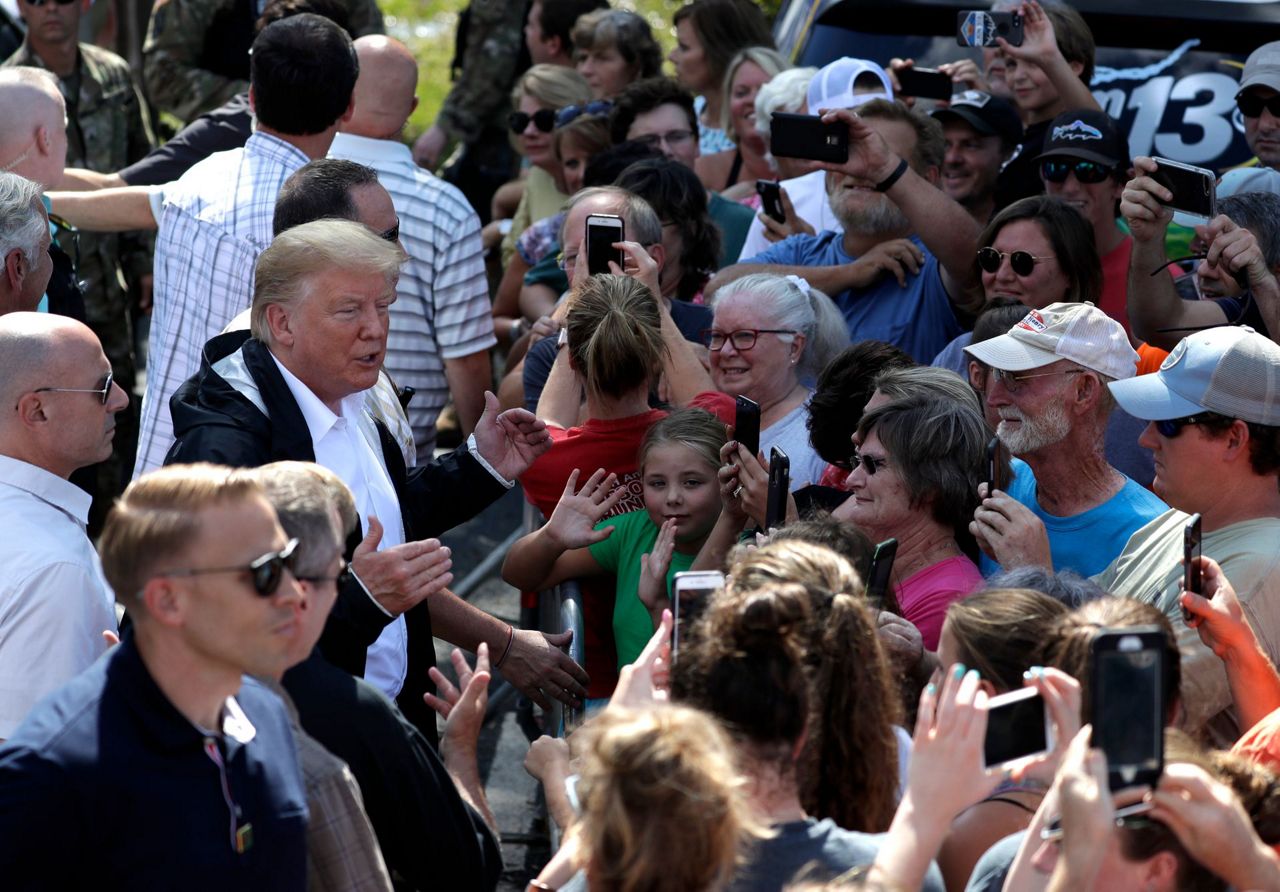 WILMINGTON, N.C. (AP) — Exhaustion and frustration are building in the Carolinas as thousands of people wait to go home days after Hurricane Florence unleashed epic floods blamed for at least 37 deaths, including those of two women who drowned when a sheriff's van taking them to a mental health facility was swept off a road.

With the remnants of Florence finally out to sea and skies bright over rivers still swelling with muddy water, President Donald Trump visited the disaster zone, riding through soggy neighborhoods and helping pass out warm meals at a church in the hard-hit coastal town of New Bern.

"How's the house?" Trump told one person. "You take care of yourself."

There wasn't any presidential fanfare 120 miles away in Fayetteville. There, Roberta and Joseph Keithley had been sleeping on cots set up in a school classroom since Friday. They still didn't know if their home was ruined.

"It's getting a little frustrating, but you have to deal with it and roll with the punches," said Roberta Keithley, 73. "It's just another hurdle to get over in life."

To the south, daybreak brought a return of floodwaters to Nichols, South Carolina, which also was inundated by Hurricane Matthew two years ago. The flooding from Florence had subsided, only to get worse again.

Mayor Lawson Battle said that as far as he knew, everyone in the town of about 360 people evacuated as the water first started to invade town Monday. But Battle just couldn't think about that anymore.

"I'm focusing on this disaster at hand," he said. "I don't have time to think. I'm just so tired."

Access improved to Wilmington, a North Carolina port city of 120,000 that was cut off for days by high water. But officials said they don't know when evacuees would be able to return home, and it may be next week before conditions improve drastically since the Cape Fear River isn't expected to crest at the city until Monday or Tuesday.

"Understand: There is a lot of water inland, and it is continuing to make its way downstream," county manager Chris Coudreit said.

Nearly 3 feet of rain fell in places, and dozens of cities had more than 10 inches of rain. Roads remained dangerous, and some were still being closed as swollen rivers emptied toward the ocean.

North Carolina officials said some 7,800 people remained in shelters, down from about 10,000 on Monday despite Gov. Roy Cooper's plea to stay put.

In Lumberton, where the Lumber River still covered parts of town, water was deep enough that vehicles passing by on streets sent wakes into partially submerged homes, businesses and a church.

Some of those who left shelters may have been headed toward the coast on U.S. 421, where a long line of cars, utility crews and trucks loaded with generators sat in a jam.

At least 37 people have died in the three states, including two women who were being taken to a mental health facility when the van they were riding in was engulfed by floodwaters from the Little Pee Dee River in South Carolina, authorities said.

Horry County Sheriff's Department spokeswoman Brooke Holden said two deputies in the van tried to get the victims out but couldn't. Rescue teams plucked the deputies from the top of the vehicle. They were placed on leave pending an investigation.

Sheriff Phillip Thompson said he does not believe the women were in restraints like those sometimes used on psychiatric patients.

It wasn't clear why the women were being moved in the aftermath of a killer hurricane, and Justin Bamberg, a lawyer who has represented the families of several people injured or killed by law officers, said he was perplexed by the decision.

"If that road is in an area where it is a flood risk, and waters were rising, why were they driving on that road anyway?" said Bamberg, a state lawmaker.

At least 24 of the victims died in vehicles, and most were in accidents linked to flooding.

North Carolina's farmers, meanwhile, are beginning to count up their losses.

The Tobacco Growers Association of North Carolina estimated up to 125 million pounds of tobacco leaf could be damaged by flooding, winds and power outages, an amount that could translate to as much as $350 million in lost farm revenue.

Association CEO Graham Boyd said about 40 percent of the crop was still in the field when the storm hit. North Carolina is the nation's top producer of tobacco.

The flooding has killed an estimated 3.4 million chickens and 5,500 hogs, authorities said. Farmers are also concerned about cotton, sweet potatoes, peanuts and corn, but swamped roads and fields have made it difficult to assess the damage.

The risk of environmental damage from Florence mounted, too, as human and animal waste was washed into the floodwaters.

More than 5 million gallons (18 million liters) of partially treated sewage spilled into the Cape Fear River after power went out at a treatment plant, officials said, and the earthen dam at a pond holding hog waste was breached, spilling its contents.

For the latest on Hurricane Florence, visit https://www.apnews.com/tag/Hurricanes