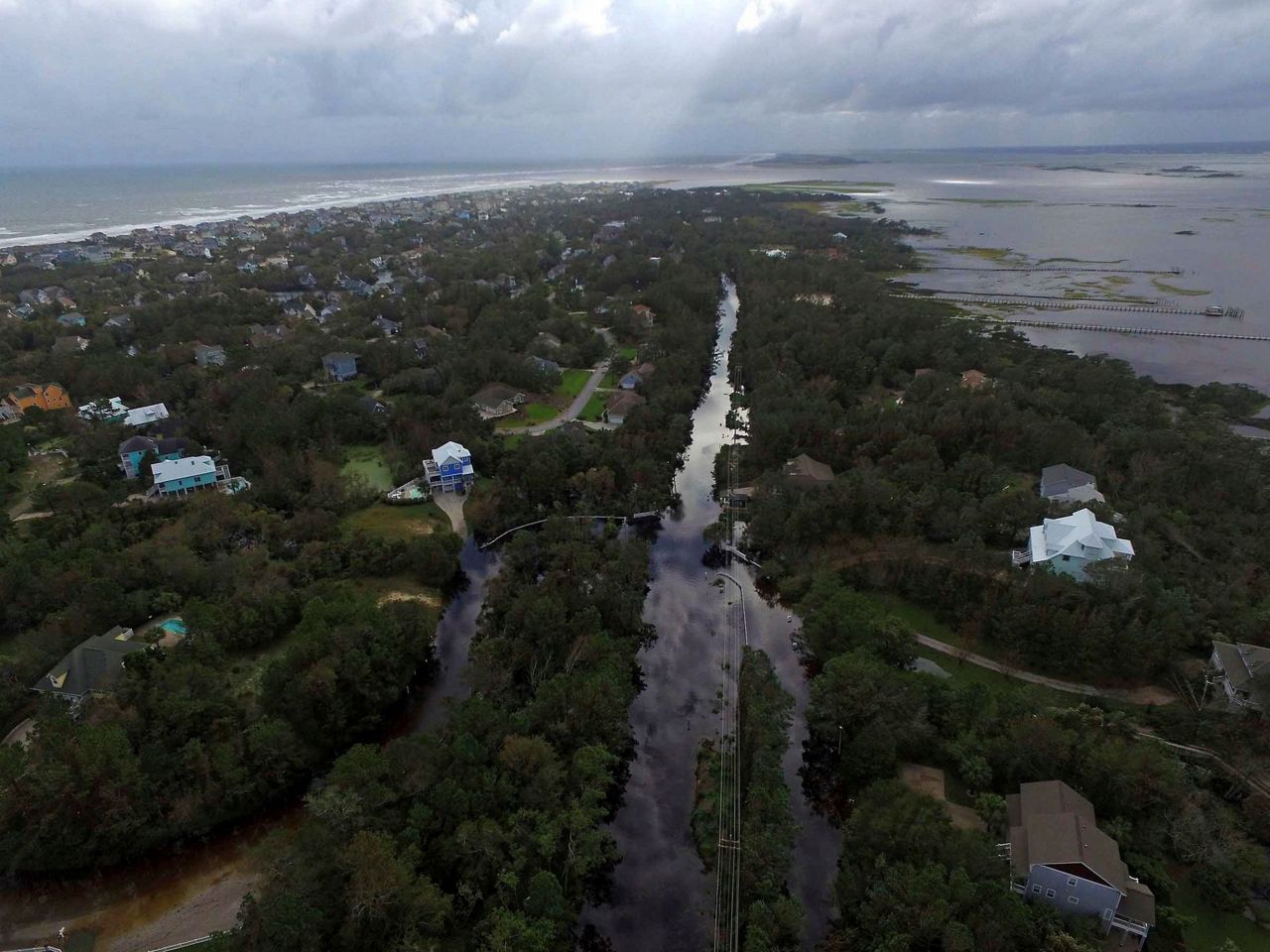 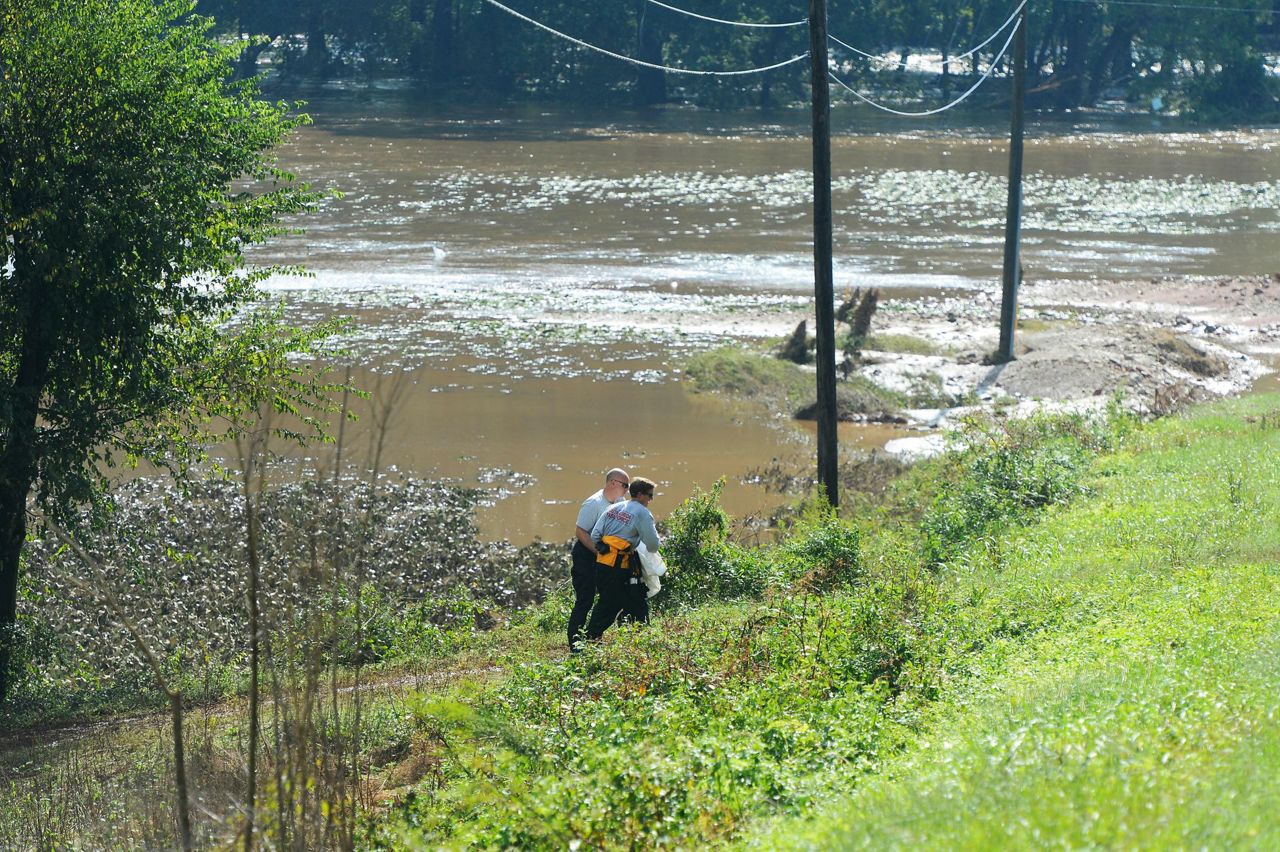 2 of 10
Rescue workers recover the body of a 1-year-old in Union County on Monday, Sept. 17, 2018 after the child was swept away in floodwaters resulting from the remnants of Hurricane Florence on Sunday. (David T. Foster III/The Charlotte Observer via AP) 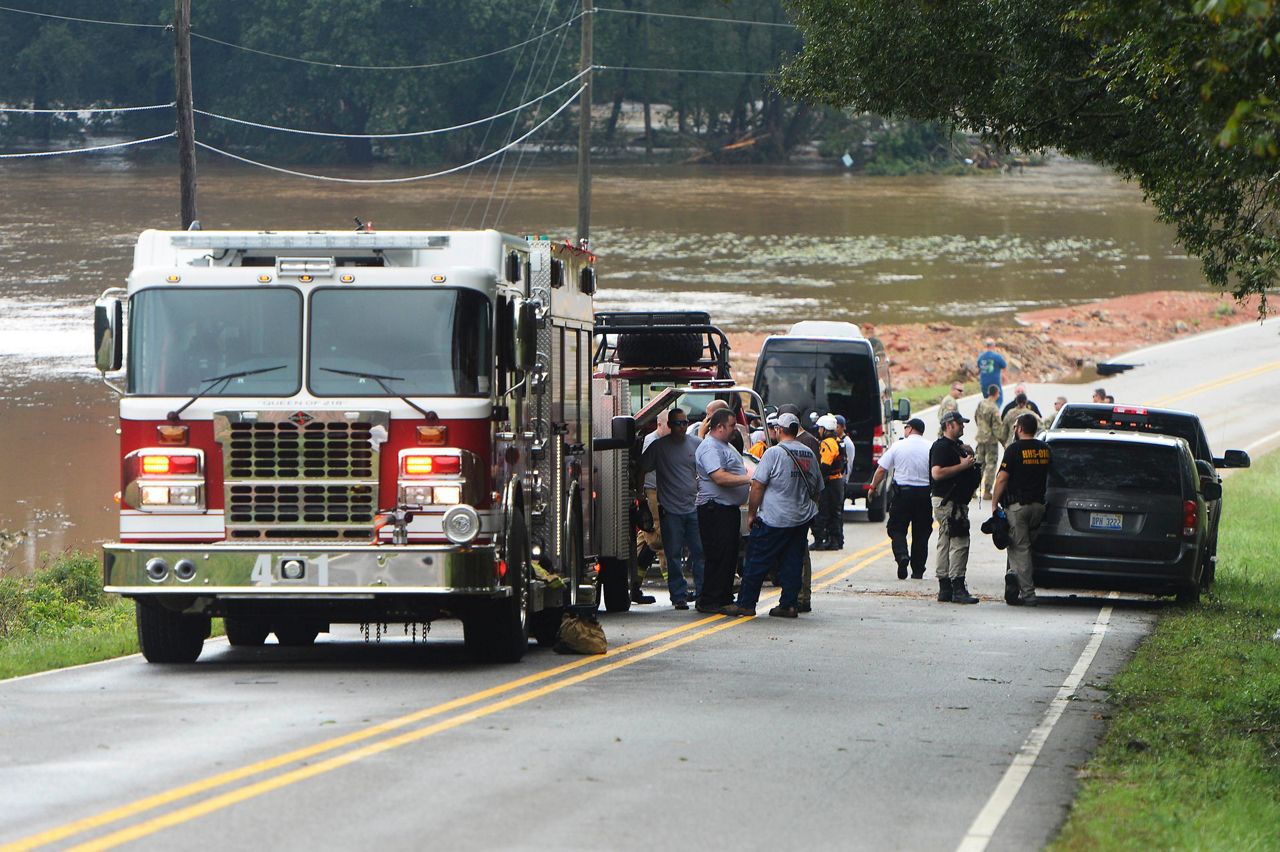 3 of 10
Rescue workers stage their equipment for the search for a a 1-year-old in Union County on Monday, Sept. 17, 2018, after the child was swept away in floodwaters resulting from the remnants of Hurricane Florence on Sunday. The child's body was later recovered. (David T. Foster III/The Charlotte Observer via AP) 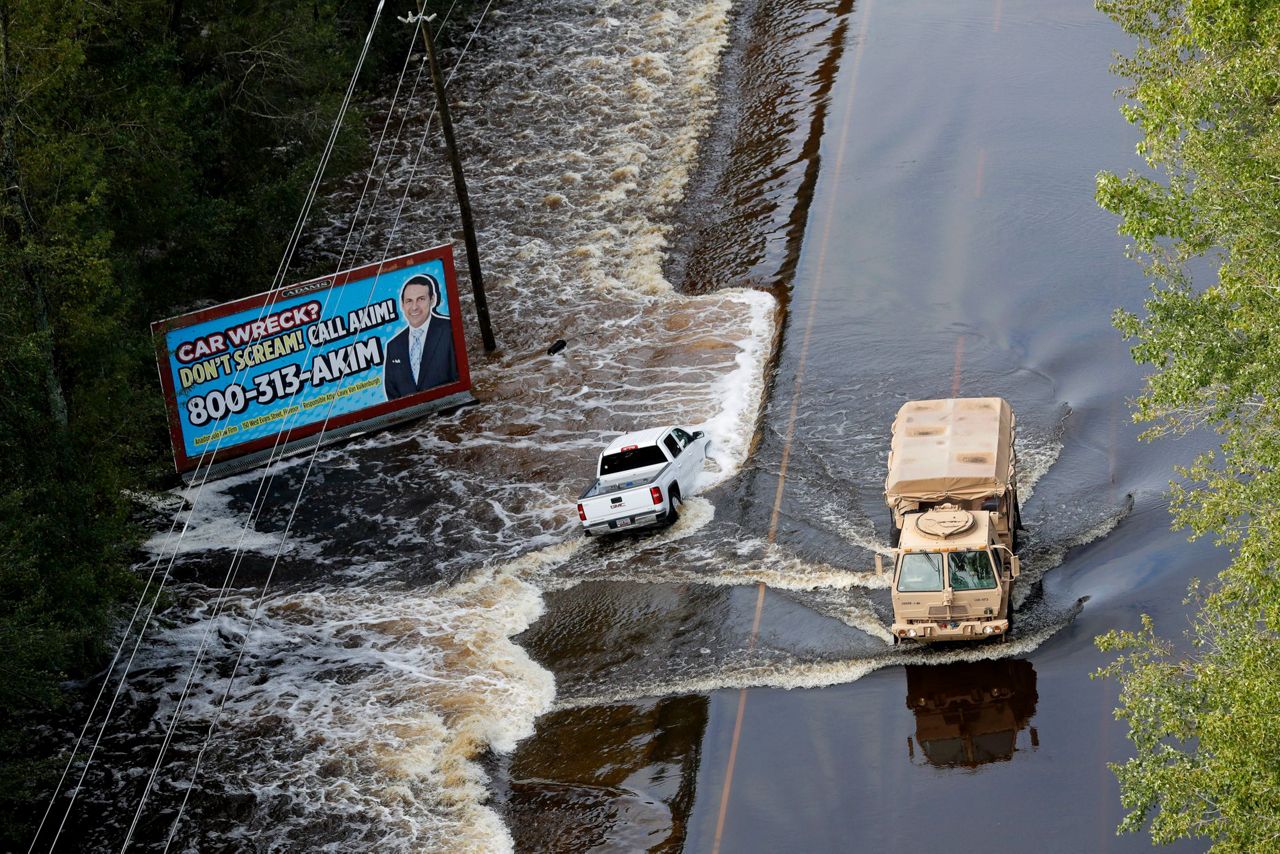 4 of 10
A National Guard vehicle drives past a truck washed off the roadway from floodwaters in Dillon, S.C., Monday, Sept. 17, 2018, in the aftermath of Hurricane Florence. (AP Photo/Gerald Herbert) 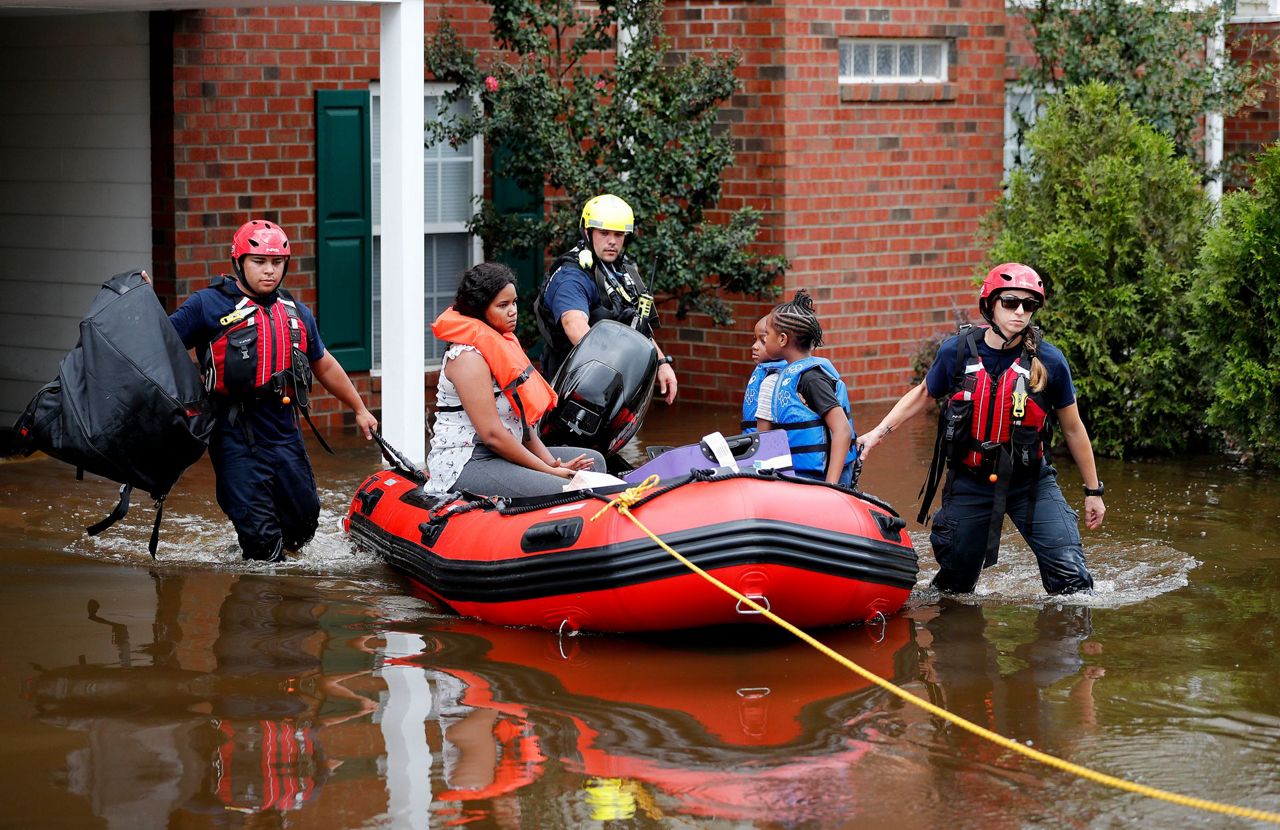 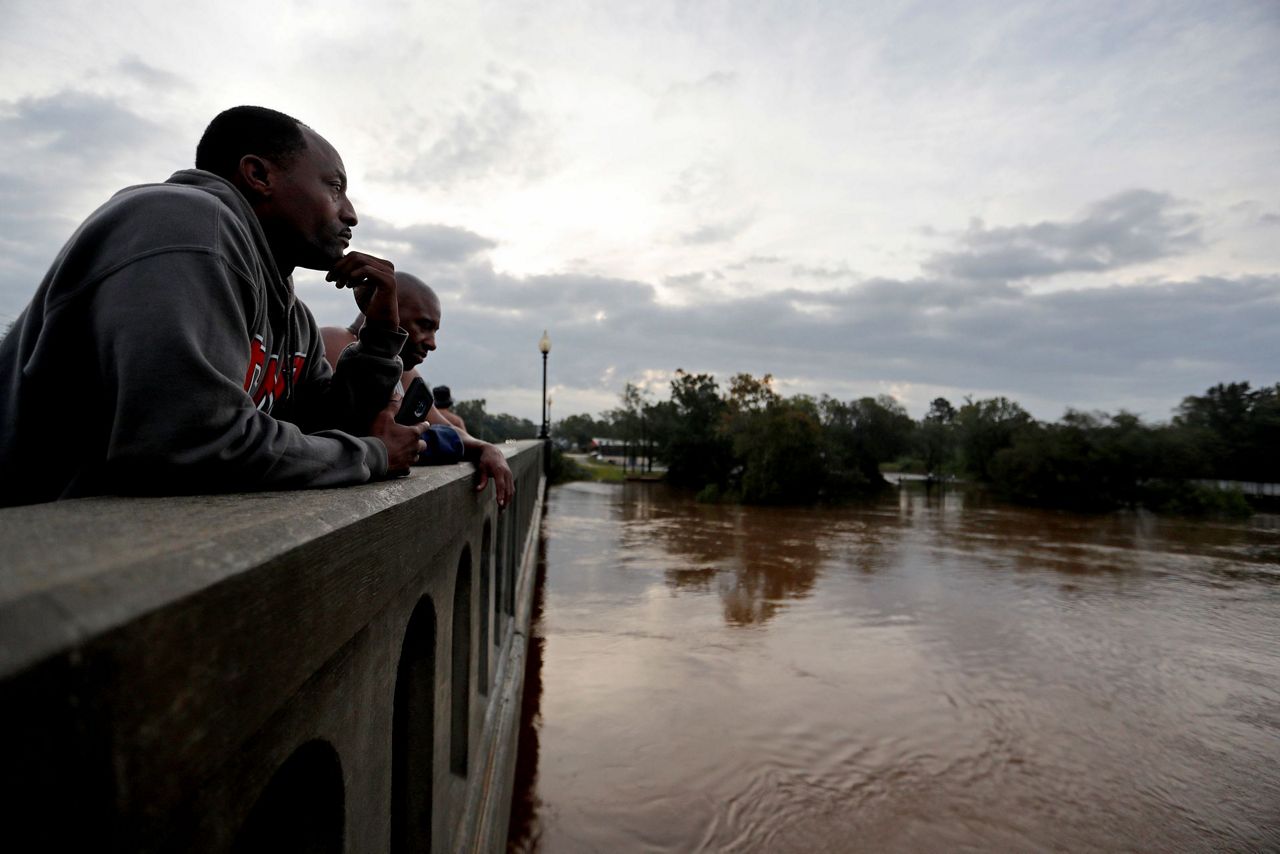 6 of 10
Gerald Generette, left, and Maurice Miller look onto the Cape Fear River as it continues to rise in the aftermath of Florence in Fayetteville, N.C., Monday, Sept. 17, 2018. (AP Photo/David Goldman) 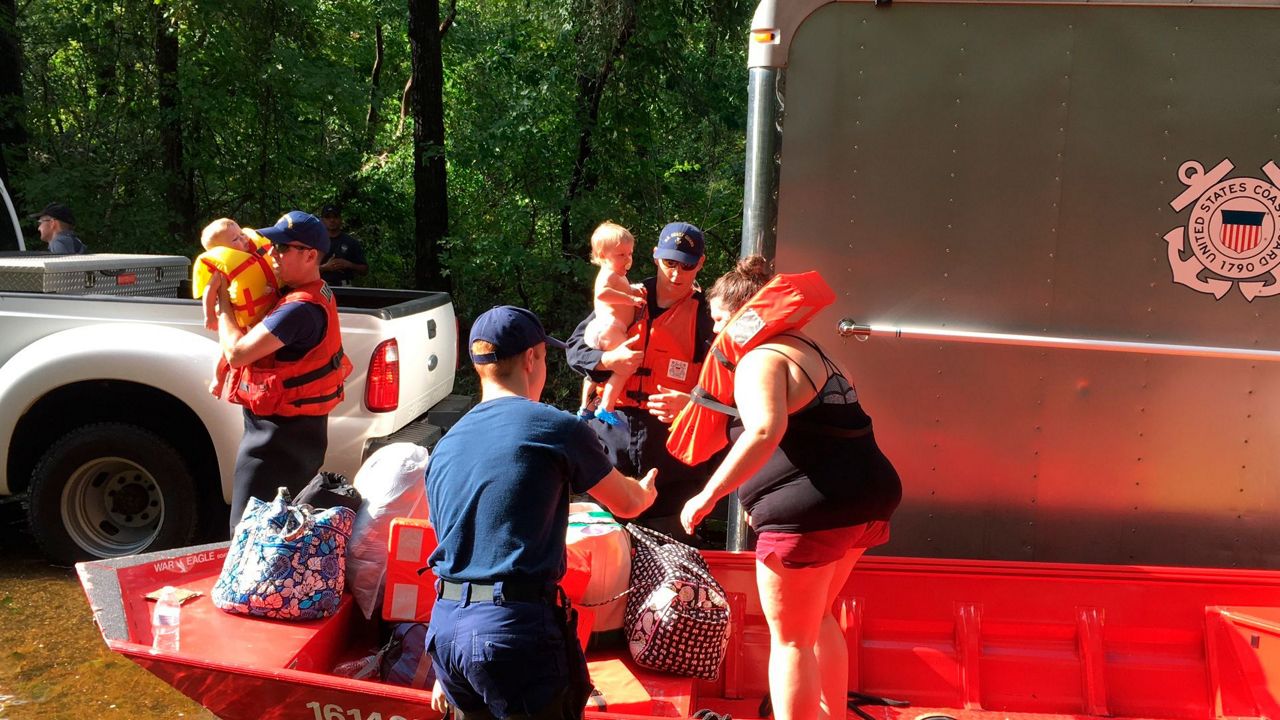 7 of 10
The Coast Guard helps Julie Lamb out of a boat with her infant children after a water rescue on Monday, Sept. 17, 2018, in Lumberton, NC. (AP Photo/Jonathan Drew) 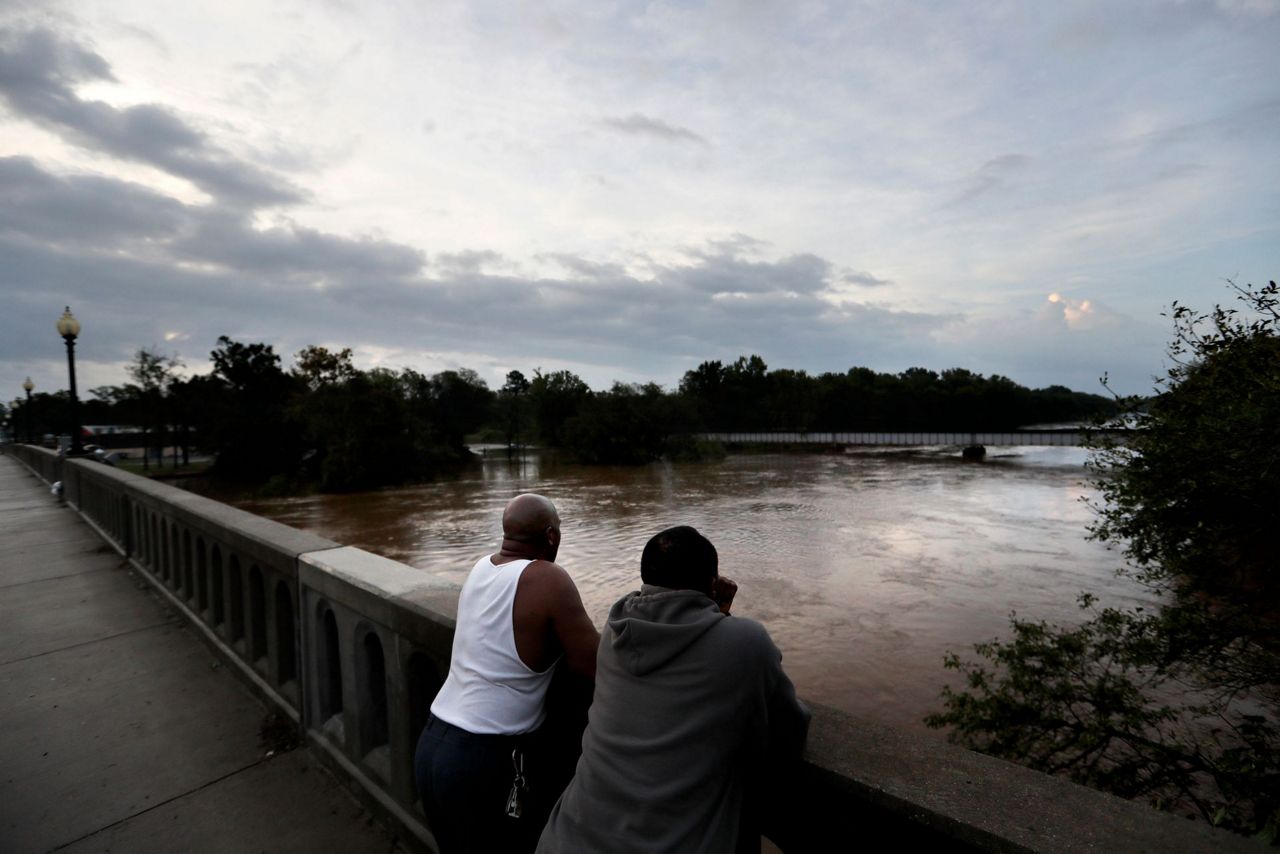 8 of 10
Gerald Generette, right, and Maurice Miller look onto the Cape Fear River as it continues to rise in the aftermath of Florence in Fayetteville, N.C., Monday, Sept. 17, 2018. (AP Photo/David Goldman) 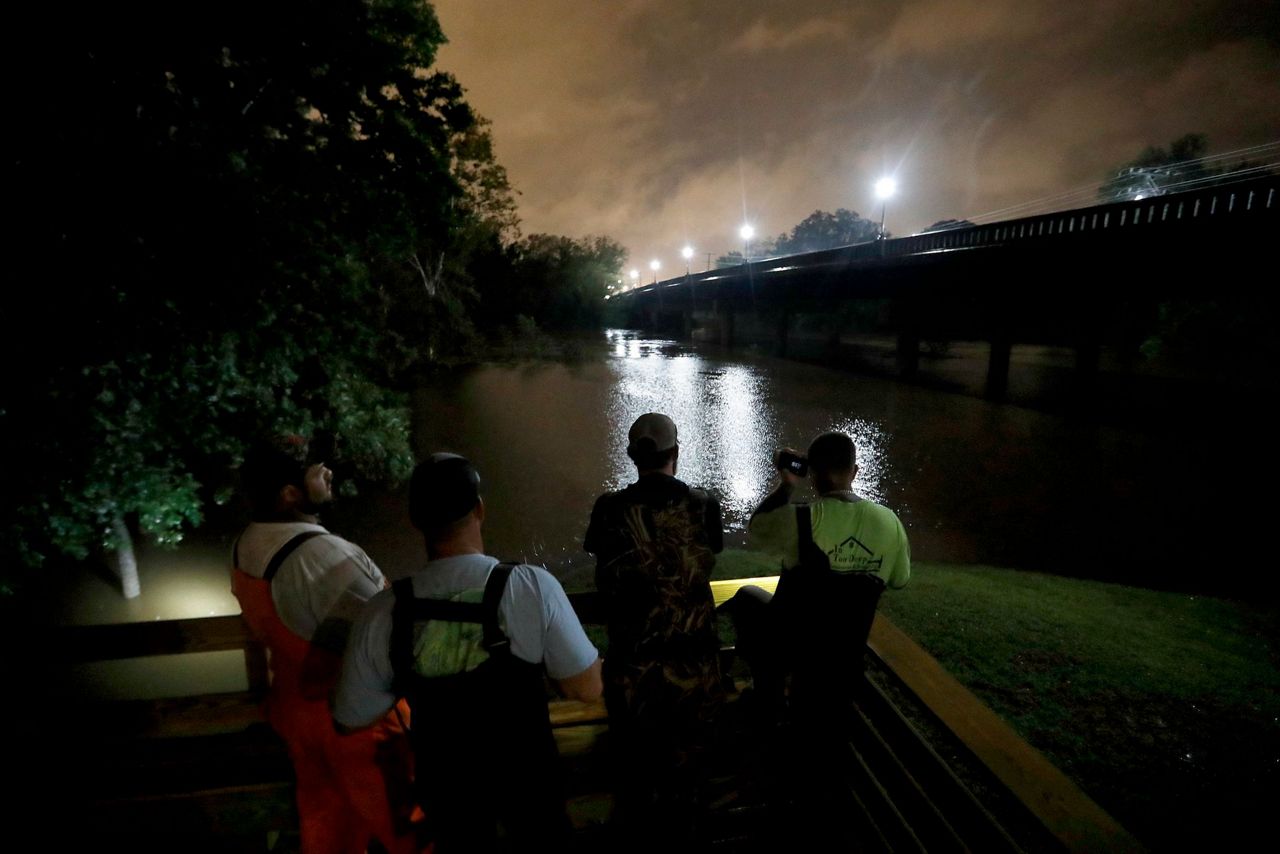 9 of 10
A group of local fishermen keep an eye on the Cape Fear River as they stage for potential water rescues while additional flooding remains a threat from Florence, in Fayetteville, N.C., Sunday, Sept. 16, 2018. (AP Photo/David Goldman) 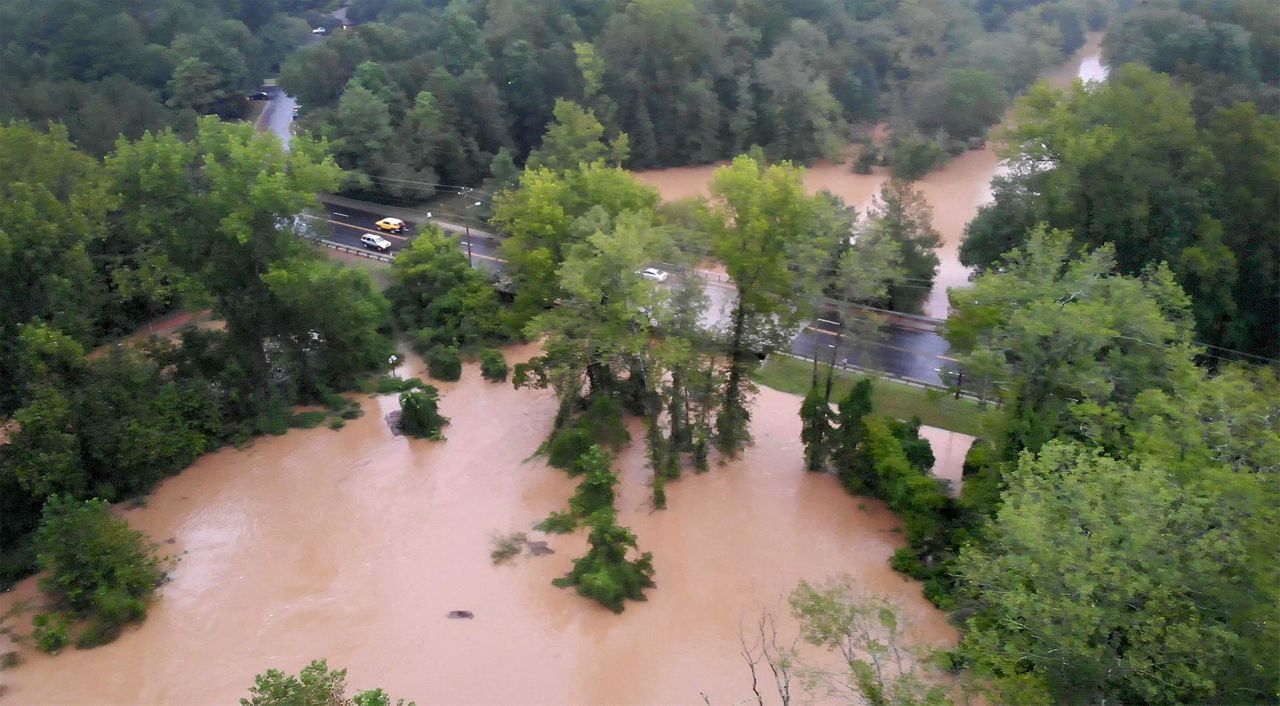 10 of 10
The floodwaters of McAlpine Creek along Randolph Road in Charlotte, N.C., are seen on Sunday, Sept. 16, 2018. Tropical Storm Florence forced McAlpine Creek from its bed, flooding the popular greenway for walkers and bicyclists. (Jeff Siner/The Charlotte Observer via AP)

MIAMI (AP) — The forecast for Florence has not changed, unfortunately: It's still raining, and rivers are still rising. All but one road in and out of a North Carolina city of 120,000 people are underwater or blocked by debris. Residents of inland communities who thought they were safe from the storm have to find high ground because of expected flooding. When the sun finally comes out later this week, it's going to take a long time to dry out.

—Storm deaths: Florence is being blamed for at least 32 deaths in the Carolinas and Virginia, while Typhoon Mangkhut has killed at least 69 people in the Philippines and China.

—Heavy rains: Nearly 34 inches (86 centimeters) of rain fell from Thursday through Sunday in Swansboro, on the North Carolina coast, according to the National Weather Service

—Damage estimates: $17 billion to $22 billion in lost economic output and property damage, according to economists at Moody's Analytics

—Evacuations: Tens of thousands ordered out of communities along North Carolina's steadily rising rivers, while over 2.4 million people in southern China's Guangdong province were warned to escape Mangkhut

—To the rescue: Over 1,000 search-and-rescue personnel with 36 helicopters and over 200 boats were working in North Carolina, and the Defense Department assigned 13,500 military personnel to help relief efforts

—Safe now: North Carolina's governor says 2,600 people and 300 animals have been moved to safety as of mid-day Monday

—Grounded: about 200 U.S. flights canceled Monday, down sharply from the 3,500 canceled from Wednesday through Sunday

IMAGES FROM THE GROUND

Images captured by Associated Press journalists show flooding caused by Florence in the Carolinas and Typhoon Mangkhut in the Philippines .

About 50 poor miners and their families sought refuge from Typhoon Mangkhut in a chapel, but it appears unlikely that any survivors will be pulled from the shelter that ended up buried by a landslide . Mangkhut weakened from a typhoon to a tropical storm as it moved deeper into southern China on Monday.

A 3-month-old baby boy whose North Carolina mobile home was split by a falling pine tree is among at least 32 deaths linked to Florence. Authorities also have recovered the body of 1-year-old North Carolina boy who was swept from his mother's arms by floodwaters. And authorities near Richmond, Virginia, said one person died after an apparent tornado touched down there as remnants of Florence headed northward.

Florence has taken a deceptive turn: Violent winds that rattled shingles off houses and tore down trees subsided and the pounding rain slowed to a pour, lulling many in its path into believing they've already weathered the worst of it. Authorities in Fayetteville, North Carolina, using bullhorns to try to rouse people from their complacency, are finding some storm-weary residents just don't want to leave in spite of rising risks of devastating flooding.

Something else to worry about: some dams might not be able to hold up under the strain of the devastating flooding in North Carolina. According to data obtained by The Associated Press, the state has 1,445 dams rated high hazard, and 185 of those structures had conditions of poor or unsatisfactory during recent inspections.

Some good news: Waffle House is open ! CEO Walt Ehmer says the restaurant chain that's famous for staying open in spite of natural disasters is sending workers and food into Wilmington, North Carolina, which was cut off by Florence's floodwaters.

When evacuating flooded areas , don't rely on GPS to get you around high waters. That's the lesson learned by one North Carolina motorist who wanted to drive to Florida to escape Florence's devastation but instead got steered into flooding that closed a stretch of Interstate 95. He was left stranded and wondering when his insurance company might be able to send roadside assistance.

It could be months before the number of fatalities caused by Florence and Typhoon Mangkhut to be fully known, and it's common for these kinds of tallies to sharply escalate as officials take account of the deaths indirectly caused by a storm. Disaster experts say it's often difficult to quickly confirm hurricane-related fatalities because of the vast regions storms can affect.

While dealing with Florence in the Carolinas, the Trump administration's disaster relief chief found himself talking on Sunday news shows about the death toll in Puerto Rico from last year's Hurricane Maria, which President Donald Trump loudly disputed on Twitter. Brock Long of the Federal Emergency Management Agency said "the numbers are all over the place" and "there's just too much blame going around."

For the latest on Hurricane Florence, visit https://www.apnews.com/tag/Hurricanes