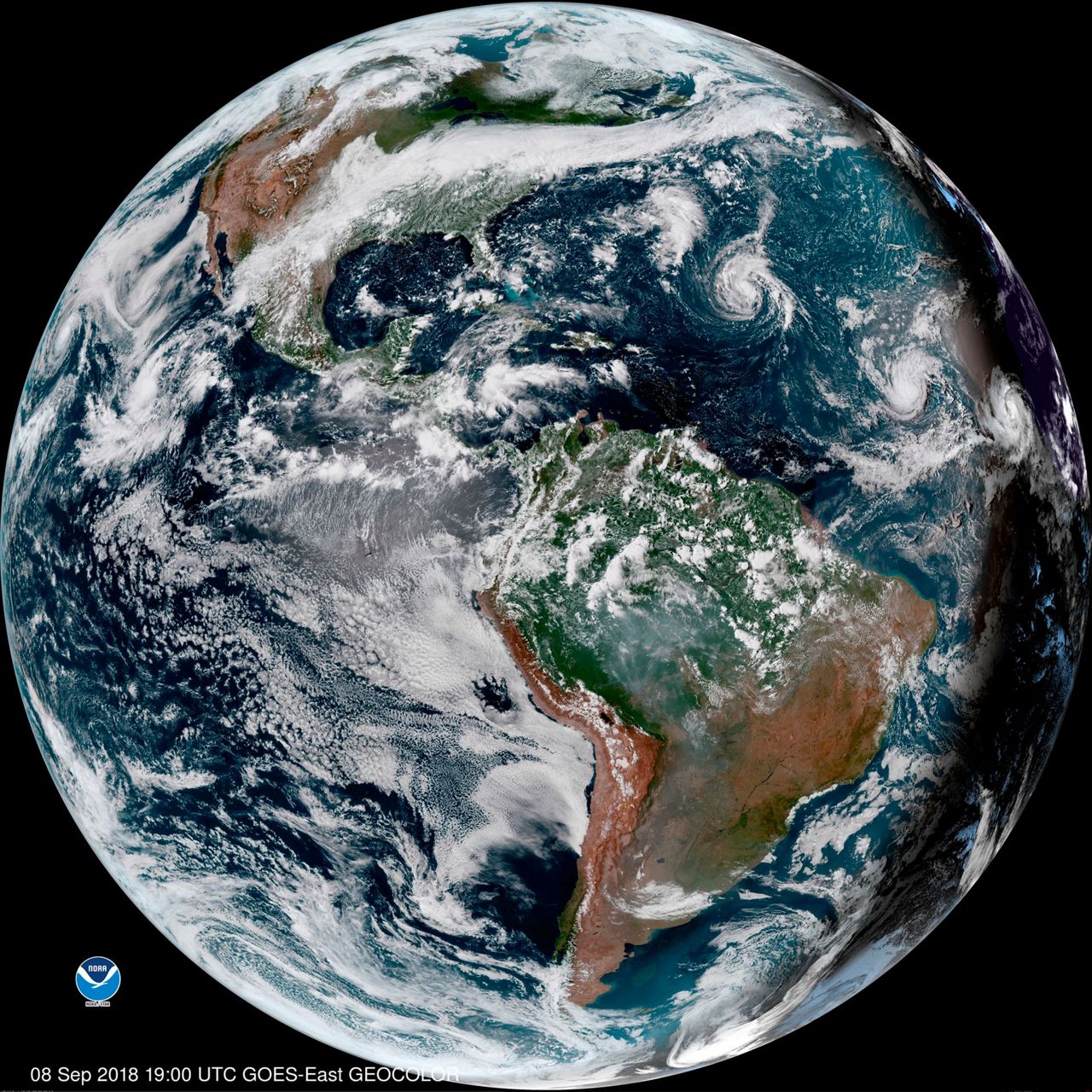 1 of 2
This enhanced satellite image made available by NOAA shows Tropical Storm Florence, third from right, in the Atlantic Ocean on Saturday, Sept. 8, 2018 at 3 p.m. EDT. At right, off the coast of Africa is Tropical Storm Helene, and second from right is Tropical Depression 9. (NOAA via AP) 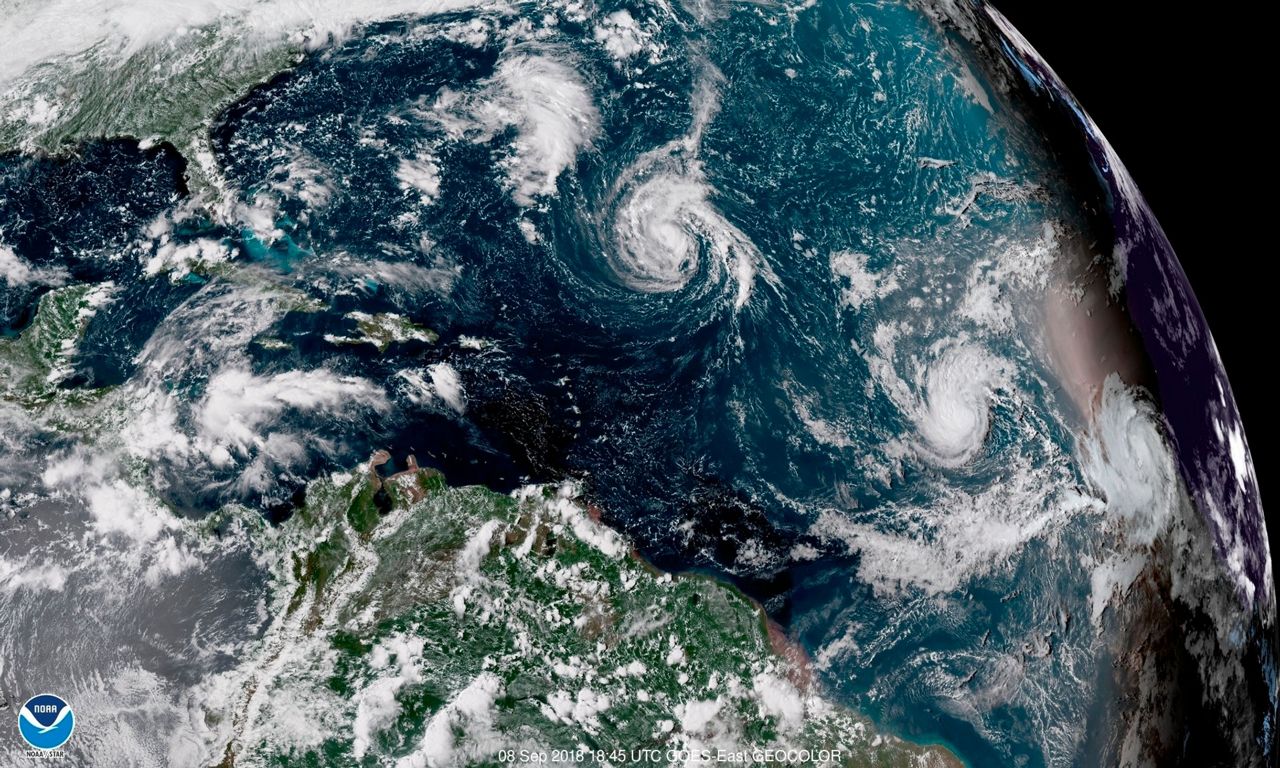 2 of 2
This enhanced satellite image made available by NOAA shows Tropical Storm Florence, center, in the Atlantic Ocean on Saturday, Sept. 8, 2018 at 2:45 p.m. EDT. (NOAA via AP)

Q&A: With severe storms approaching US, what to expect?

Emergency officials are urging residents to prepare for severe storms that are forecast to hit the East Coast and Hawaii over the next week at what is the peak of this year's hurricane season.

Coming in from the Atlantic Ocean, Tropical Storm Florence is expected to make landfall Thursday as a level 3 hurricane or greater, steered by winds that could guide it as far south as Florida or as far north as New England.

A look at what forecasters are predicting for those storms and the rest of the season:

WHAT DO WE KNOW ABOUT THE STORMS RIGHT NOW?

Tropical Storm Florence was gathering strength Saturday, with the National Hurricane Center expecting it to become a hurricane overnight. Five days out from expected landfall, there's still wide uncertainty about where it will hit and at what intensity, but the latest models show that it's most likely to make landfall in the southeast U.S., between northern Florida and North Carolina.

The latest models on Saturday show that it's becoming less likely the storm will veer north and miss the mainland U.S. entirely. At minimum, residents along the East Coast are being told to expect heavy rainfall and storm surges, with the possibility of heavy winds.

Forecasters are also keeping an eye on two storms gathering behind Florence. Tropical Storm Helene was expected to reach the Cabo Verde islands on Saturday but is predicted to miss the mainland U.S. A tropical depression that was upgraded to Tropical Storm Isaac on Saturday is headed toward the Caribbean and brings a greater chance of curving north toward Puerto Rico and the mainland, potentially as a hurricane.

It's still uncertain whether Hurricane Olivia will make landfall in the Hawaiian Islands, but at minimum meteorologists believe it will come very close and deliver a new round of rainfall.

The National Weather Service has also issued a typhoon watch in the U.S. territory of Guam, where Tropical Storm Mangkhut is approaching from the east and is expected to bring damaging winds by Monday evening.

WHEN WILL WE HAVE A BETTER IDEA OF WHETHER THEY POSE A THREAT?

Each day brings a clearer picture of the risks posed by the storms. Jeff Masters, co-founder of the Weather Underground service, says airplanes gathering weather information began flying into Florence on Saturday, which should provide data that will lead to a major boost in the reliability of models on Sunday.

Isaac's route is still wildly uncertain and will be for days. Forecasters are more confident that Olivia will affect Hawaii, with its path and intensity sharpening in the next few days.

WHAT FACTORS GIVE FLORENCE A CHANCE OF BEING A PARTICULARLY STRONG HURRICANE?

By the time it reaches the East Coast, Florence could strengthen into a major hurricane. Winds higher up in Florence have been weakening, giving it time to gather itself and gain strength over the ocean, experts say. And it's also approaching water where the temperature is slightly warmer than average, providing heat that the storm can convert into stronger winds.

HOW SHOULD PEOPLE IN AREAS VULNERABLE TO HURRICANES STAY PREPARED?

Residents in evacuation zones are urged to have a plan to flee if the order comes. Others should have at least a week's supply of food, water and medication for their families and their pets.

Brian McNoldy, a senior researcher at the University of Miami's school of marine and atmospheric science, says residents who stick it out should have gas cans to fuel their cars and power generators, and should take out some cash in case electronic payment systems are down after the storms pass.

To avoid a headache down the line, residents are also encouraged to keep insurance documents in a safe place ahead of time.

North Carolina's governor already issued a state of emergency on Friday as the storm advanced, while officials in other coastal states say they're monitoring forecasts.

WHAT EXPECTATIONS DO FORECASTERS HAVE FOR THE REST OF THE HURRICANE SEASON?

The second week of September is the peak of hurricane season, so the flurry of activity is no surprise to forecasters. After the current round of storms, though, long-range models suggest a lull for several weeks.

Masters said there's a chance for another active period by mid-October, which would mark the end of the busiest stretch of the season.

"I don't think we're quite done yet," he said, "but certainly as far as September goes, this is the big week."

Collin Binkley can be reached at https://twitter.com/cbinkley