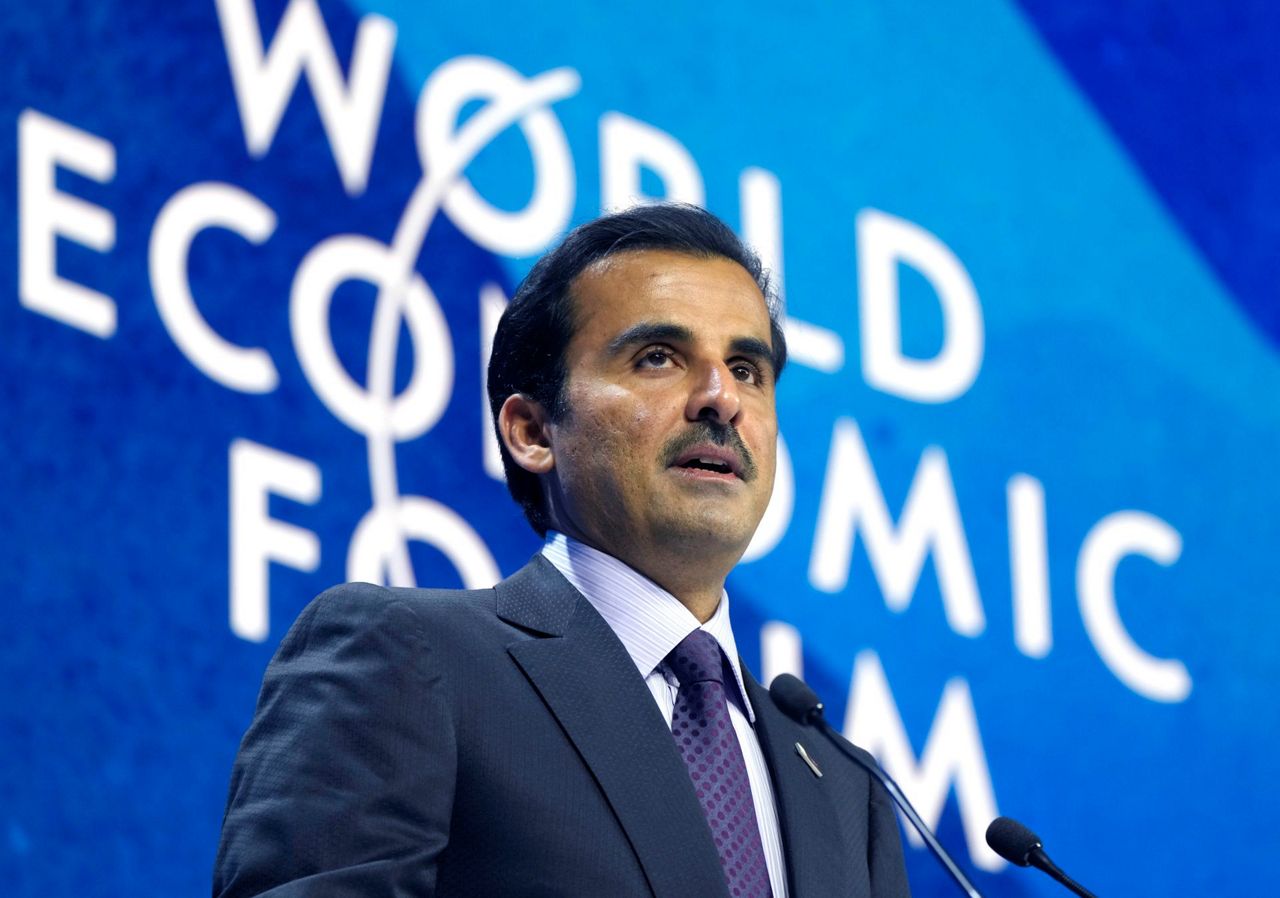 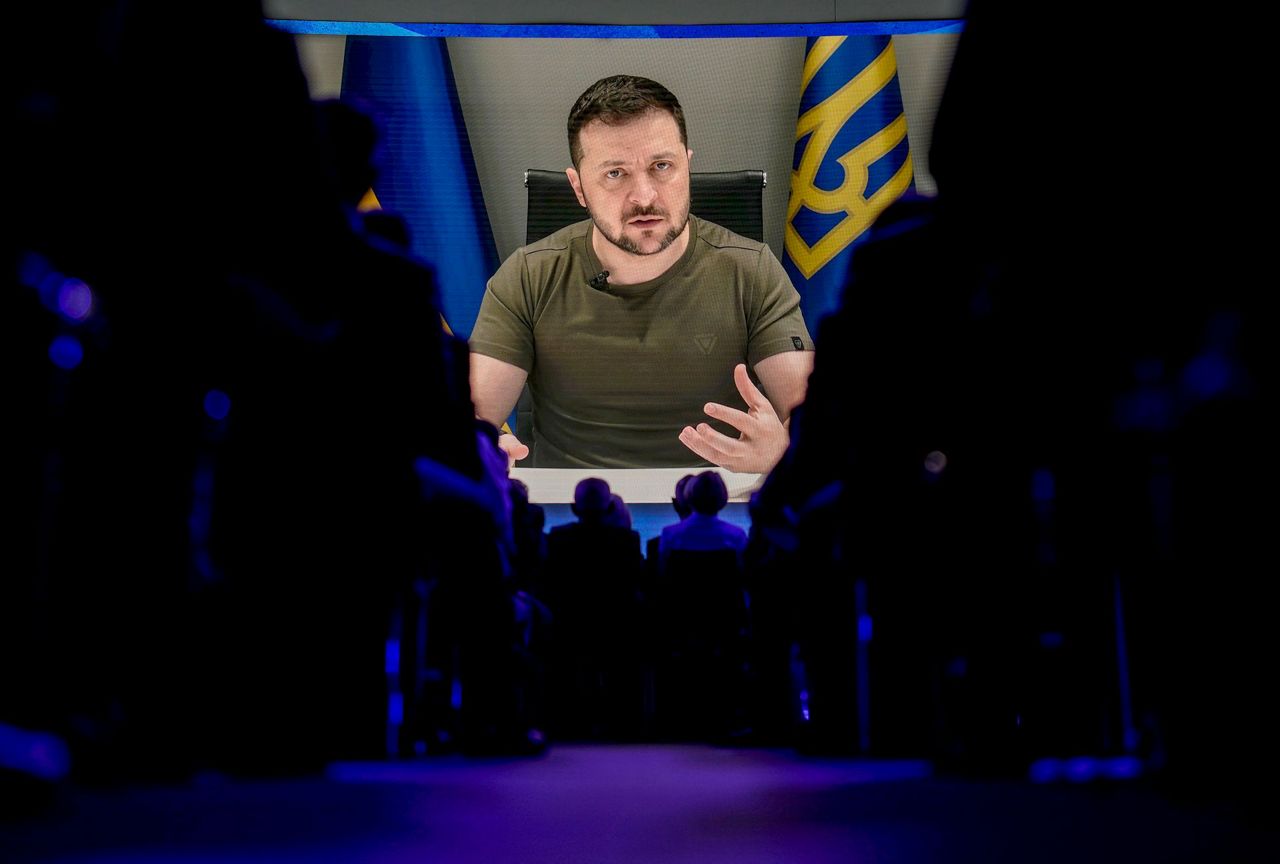 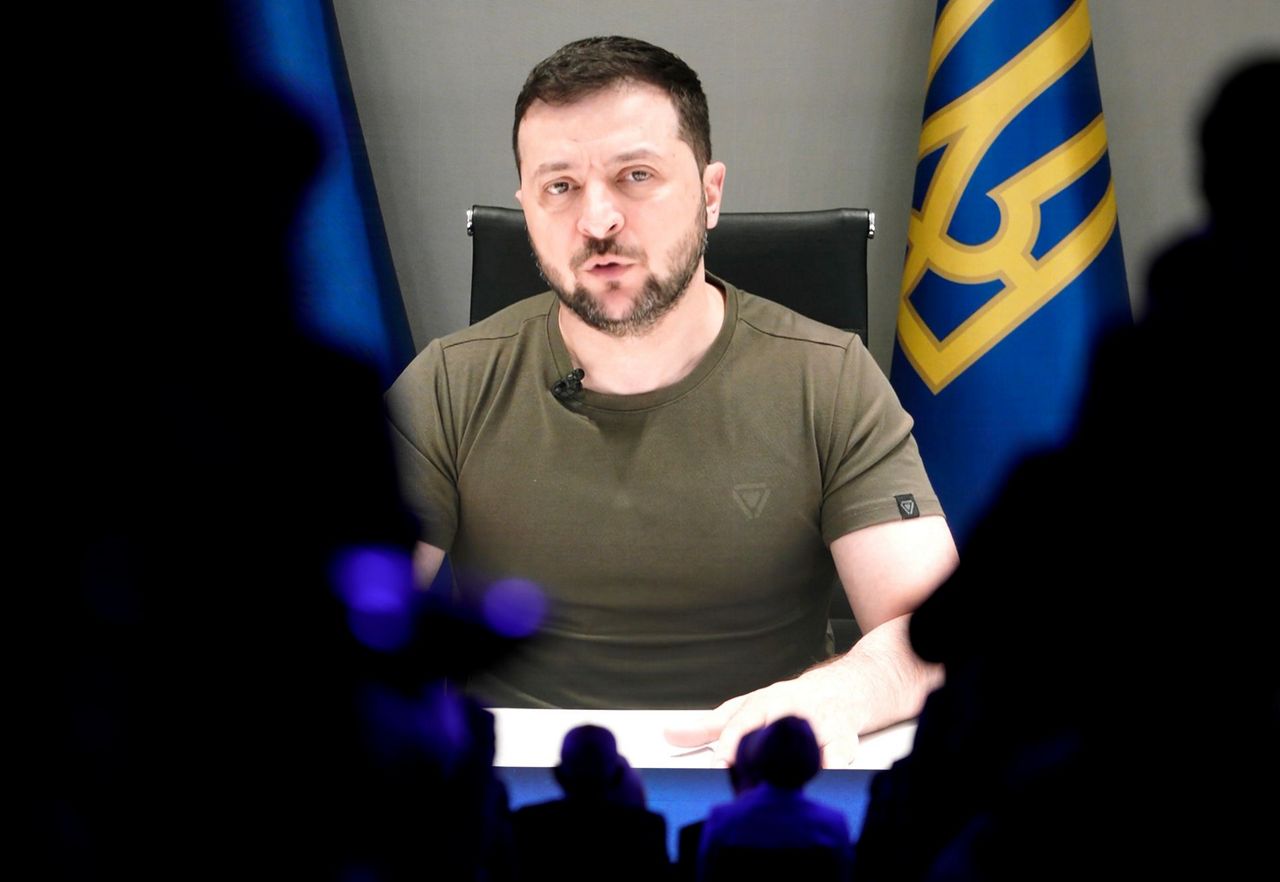 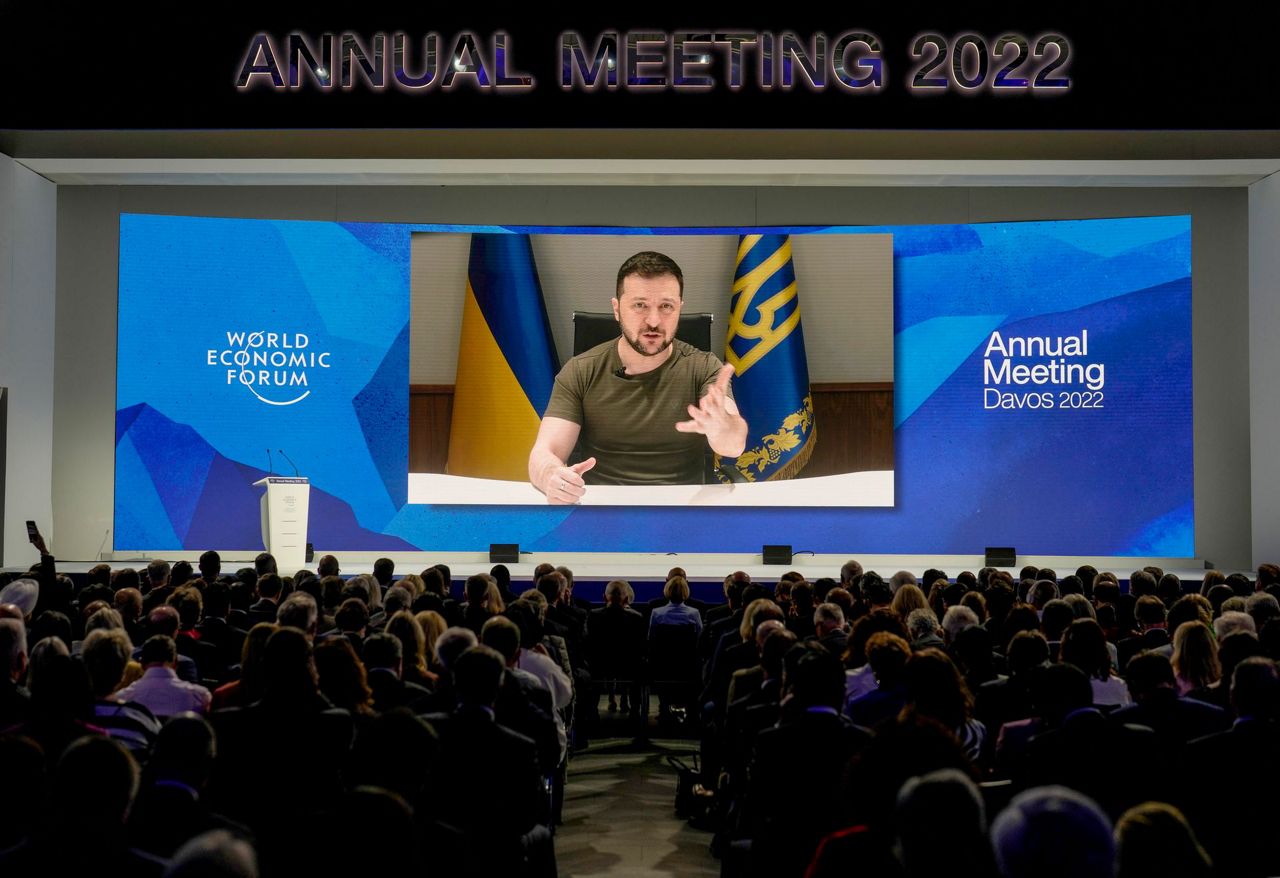 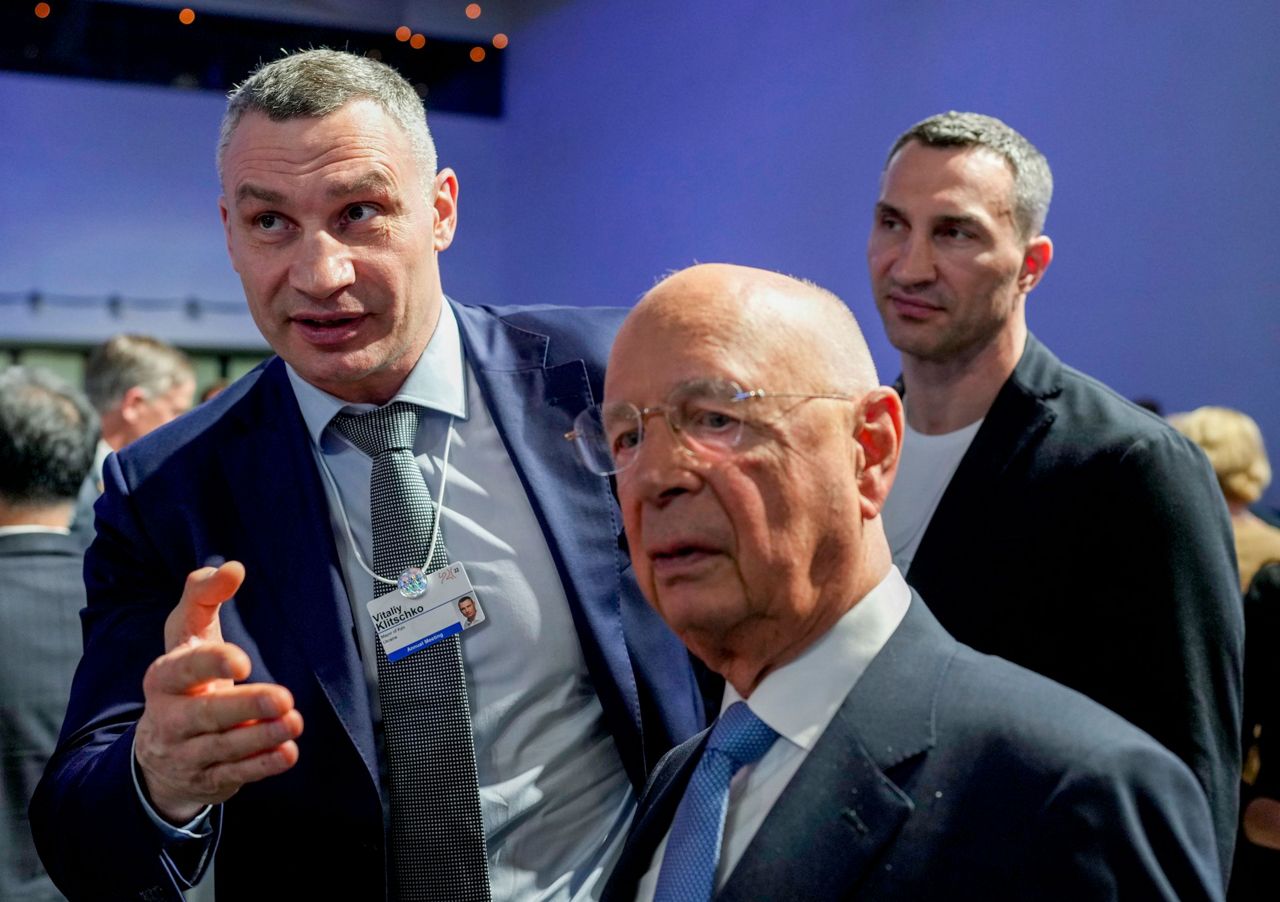 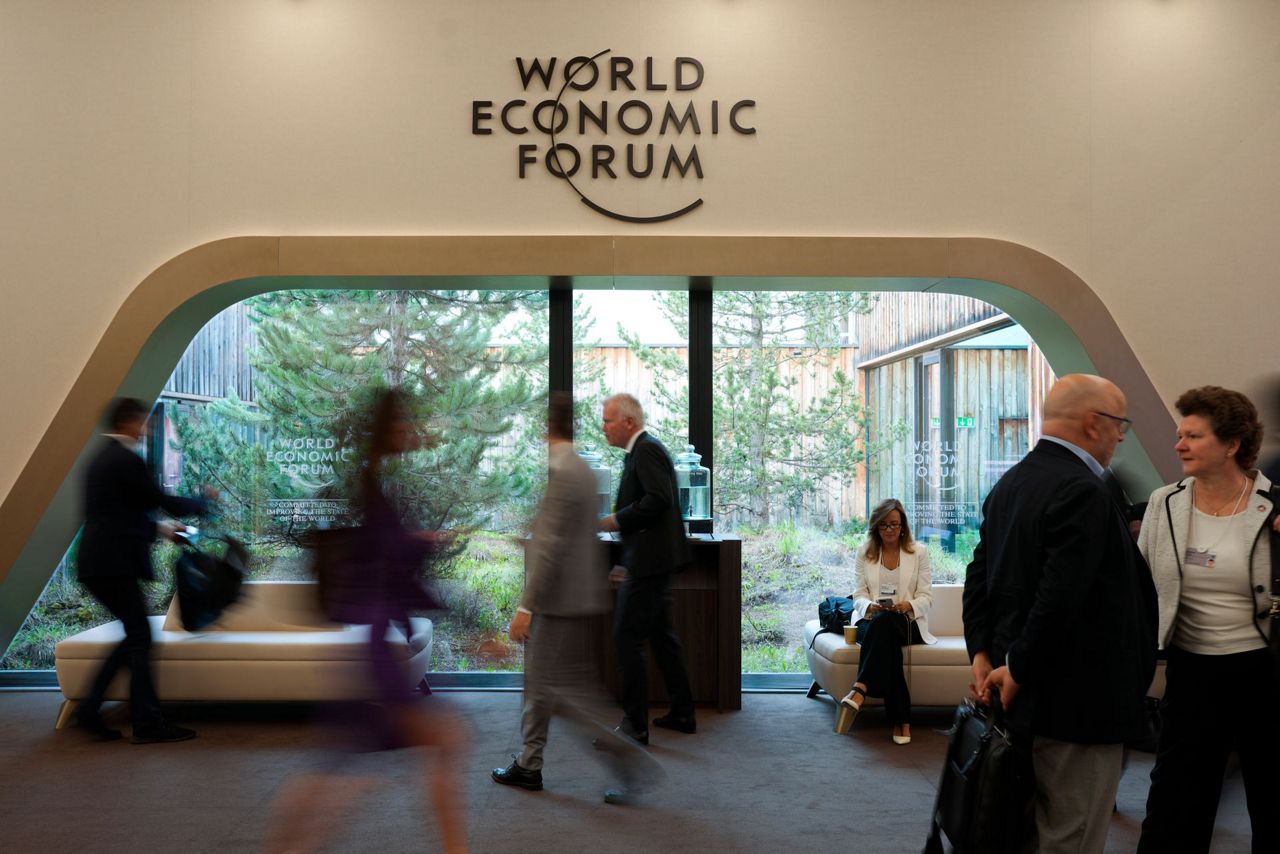 DAVOS, Switzerland (AP) — The director of the Center for Oceans Solutions at Stanford University has called for the integration of ‘blue foods’ — a shorthand for fisheries and other aquatic products — into the global food system.

“Blue foods are an important part of the food system but generally ignored in global discussions and the future of food,” said Jim Leape. “The core challenge is to bring blue foods on to the main table as vital part of economic planning and recognize that most blue foods are produced by artisanal fishers and be sensitive and considerate of their daily challenges.”

Speaking at a panel on blue foods and responding to a question on producing aquatic foods sustainably, Leape called for a change on the perception of blue foods as they offer nutritious alternatives.

The ruler of Qatar has called out double standards in the West while evoking the killing of a Palestinian-American journalist during an Israeli raid this month.

Sheikh Tamim bin Hamad Al Thani said during a speech at the World Economic Forum on Monday that “we should not accept a world where governments have double standards about the value of people based on their region, race or religion."

He added: “We consider the value of each European life to be just as precious as someone from our region.”

Al Jazeera, which is headquartered in Qatar and was started by Sheikh Tamim’s father in the 1990s, says Israeli gunfire killed its longtime correspondent Shireen Abu Akleh on May 11.

Israel says she may have been shot by its forces but maintains it cannot be certain without further forensic evidence.

Sheikh Tamim called on the world’s political and business elites gathered in Davos to give as much attention as they are to Ukraine to resolving all forgotten or ignored conflicts.

He said “the most glaring example is in Palestine" and prays “the world wakes up to the injustice and violence and finally acts.”

Governments need to “make it worth the while for private industry” to invest large sums into carbon dioxide removal technologies, a top US Government advisor on clean energy and climate change policy said.

“(Governments) can do this through tax incentives…you can do this through public procurement. There’s a range of ways to make it worth private industries while,” said Varun Sivaram, the senior director for clean energy and innovation for the US department of state.

The most recent report by the United Nation’s Intergovernmental Panel on Climate Change estimates that the deployment of carbon capture removal technologies is far behind what’s needed to meet internationally set warming targets.

“We need a scale up of a factor of 1 million to get to where we need to go. And that means that by 2050, this (carbon dioxide removal technology) needs to be the size of the oil and gas industry,” said Christian Mumenthaler, the group chief executive officer of insurance group Swiss Re.

Nili Gilbert, the vice chair of carbon removal investment company Carbon Direct, said “the enormous scale of the opportunity…captures the imagination of finance” and encouraged significant participation from the financial industry.

The head of the International Energy Agency is urging countries and investors not to use Russia’s invasion of Ukraine as a reason to increase fossil fuel investments.

Speaking on an energy panel Monday at the World Economic Forum in Davos, Switzerland, Fatih Birol said the immediate response to energy shocks from the war should be an increase of oil and gas on the market. But that did not mean large and sustained investments in fossil fuels.

Instead, he says efficiencies, such as reducing leaked methane and even lowering thermostats by a few degrees this winter in Europe, would help ensure adequate energy supply.

Russia is a major supplier of oil and natural gas, with the invasion sending European countries scrambling to reduce their reliance on Moscow.

Occidental Petroleum CEO Vicki Hollub countered that oil and gas industries had a central role to play in the transition to renewable energy. She says the focus should be on making fossil fuels cleaner by reducing emissions.

Hollub says Occidental had invested heavily in wind and solar energy and planned to build the world's largest direct air capture facility in the Permian Basin, spanning parts of Texas and New Mexico. Direct air capture is a process that pulls carbon dioxide out of the air and sequesters it.

The mayor of Kyiv, Ukraine, told business executives and government leaders gathered for meetings in Davos that his country is defending democratic values and human life.

Vitali Klitschko pointed to the audience during a World Economic Forum panel Monday with his brother, Wladimir, and said, “We are defending you personally."

He said “we are fighting, first of all, for values" and to be part of the democratic world. He called on those listening “to be proactive because we pay for that — biggest prize human lives every day."

He says Ukraine needs weapons and political and economic support.

The head of the U.N.’s World Food Program is telling billionaires it’s “time to step up” amid the threat of rising food insecurity worldwide and says he’s seen encouraging signs that uber-tycoons like Elon Musk and Jeff Bezos are getting into the action.

WFP Executive Director David Beasley built upon a social-media standoff of sorts that he had with Musk last year, when the Tesla CEO challenged policy advocates to show how a $6 billion donation sought by the U.N. agency could solve world hunger.

Since then, Beasley told The Associated Press at the World Economic Forum gathering in Davos, Switzerland, that “Musk put $6 billion into a foundation. But everybody thought it came to us, but we ain’t gotten any of it yet. So I’m hopeful.”

He said of Musk: “We’re trying every angle, you know: Elon, we need your help, brother.”

Beasley said that message was for every billionaire because “the world is in real serious trouble. This is not rhetoric and B.S. Step up now, because the world needs you.”

Ukrainian President Volodymyr Zelenskyy says in a virtual speech at the World Economic Forum gathering that his country needs funding of at least $5 billion a month to rebuild.

He said Monday at the gathering of business elites and government officials in the Swiss town of Davos that tens of thousands of lives would have been saved “if we would have received 100% of our needs at once, back in February."

He was referring to weapons, funding, political support and sanctions against Russia.

Zelenskyy also said Russia was blocking critical food supplies, such as wheat and sunflower oil, from leaving its ports and stealing some.

If such supplies remain off the market, WFP Executive Director David Beasley told The Associated Press in Davos that the world could face a food availability problem in the next 10 to 12 months, and “that is going to be hell on earth.”

Ukrainian President Volodymyr Zelenskyy is calling for “maximum" sanctions against Russia during a virtual speech at the World Economic Forum gathering.

He says in a virtual speech Monday that sanctions need to go further to stop Russia’s aggression, including an oil embargo, all of its banks blocked and cutting off trade with Russia completely.

Zelenskyy says his country has slowed Russian advances and his people's courage has stirred unseen unity of the democratic world.

He pushed for the complete withdrawal of foreign companies to prevent supporting its war.

The founder of the World Economic Forum says Russia's war in Ukraine as well as climate change and the global economy are key issues at the gathering of business elites and government leaders in Davos, Switzerland.

Klaus Schwab said Monday in welcoming remarks that “this war is really a turning point of history and it will reshape our political and our economic landscape in the coming years."

But also says the world is at “the tail-end of the most serious health catastrophe of the last hundred years — COVID-19."

Schwab added that climate change and preserving nature is something to urgently address and that concerns about high inflation will affect how to look at the future of the global economy. He pointed to fears of people plunged into poverty and dying of hunger.

The head of chipmaker Intel says a shortage of advanced equipment to make semiconductors could hold up global expansion plans.

CEO Pat Gelsinger said Monday that there have been “quite significant extensions” in delivery times for chipmaking gear for new chip factories, known as “fabs,” that the company plans to build in the U.S. and Europe.

Gelsinger said at a press roundtable on the sidelines of the World Economic Forum that “to us, this is now the No. 1 issue, is in fact the delivery of equipment.”

A handful of suppliers make high-tech semiconductor manufacturing gear, such as Dutch company ASML. A shortage of semiconductors that erupted last year hurt the availability of everything from autos to kitchen appliances and highlighted the industry’s vulnerability to manufacturing centered in Asia.

Intel announced tens of billions of investment in new chipmaking facilities for Europe, including a new fab mega site in Germany and expansion in Ireland. In January, it announced a plan for a $20 billion plant in Ohio.

Gelsinger said supply of chipmaking equipment is “the most important pinch point to the build-out of capacity today.”

He added that he’s urging authorities in the U.S. and Europe, which have each launched their own “Chips Act” to promote national semiconductor manufacturing, to speed up the legislation.

The World Economic Forum's annual meeting has kicked off Monday in Davos, Switzerland.

The village in the Swiss Alps has been transformed into a glitzy venue for the four-day confab ostensibly dedicated to making the world a better place. The event is resuming in person after a two-year hiatus because of the COVID-19 pandemic, which also delayed this year’s meeting from its usual winter slot.

Thousands of corporate executives, government officials and other VIPs filled the conference venue, both to schmooze and listen to panel discussions on topics like sustainability, climate change and the Russia-Ukraine war.

Attendees also are visiting nearby pavilions on Davos’ main drag set up by companies like Intel, Accenture and Facebook owner Meta.

One of the main attractions on opening day is a virtual keynote speech by Ukrainian President Volodymyr Zelenskyy. There’s also a sizable Ukrainian government delegation attending in person, making their case for more Western support in the country’s fight against Russia.

Copyright 2022 The Associated Press. All rights reserved. This material may not be published, broadcast, rewritten or redistributed without permission.