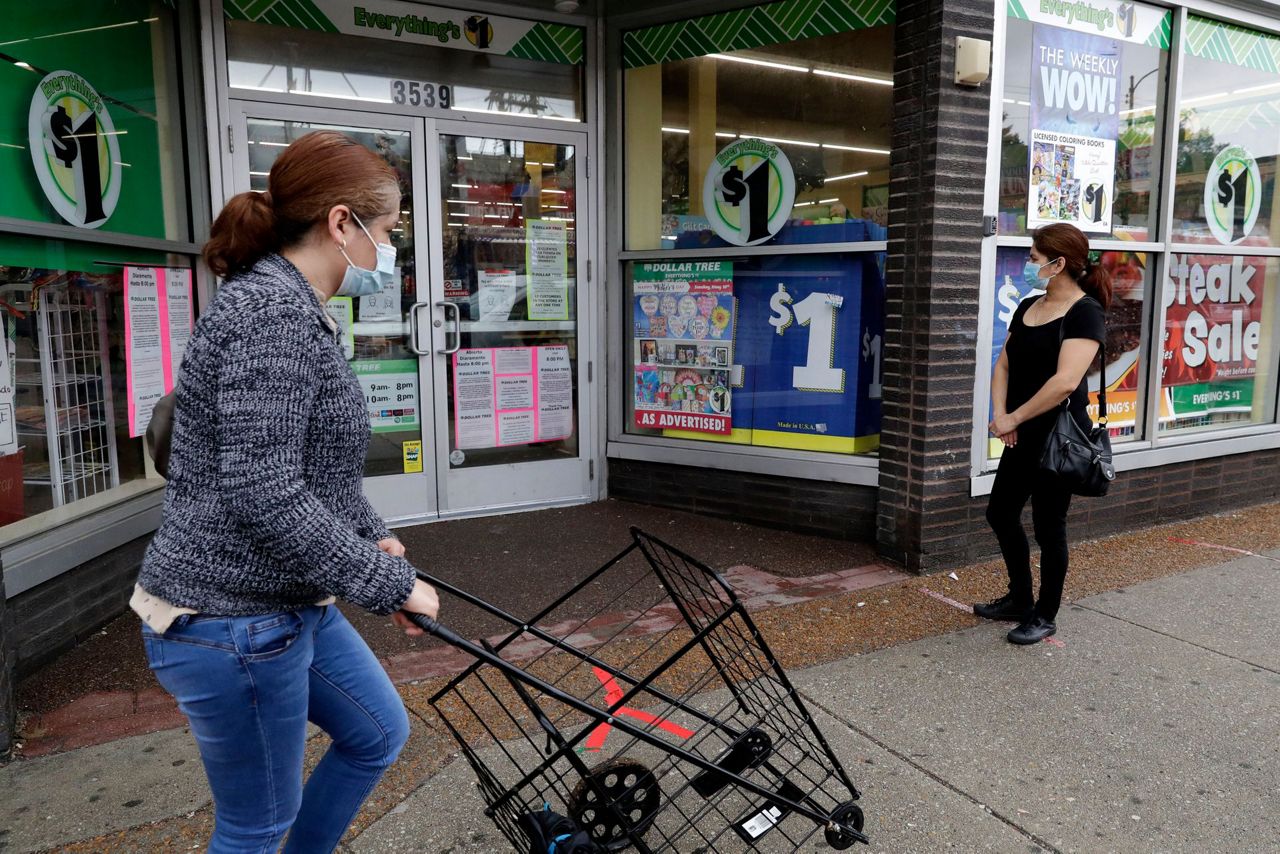 1 of 2
FILE - In this Friday, May 15, 2020, file photo, a woman wearing a mask, left, walks by a Dollar Tree, while another woman waits in line to shop at the store, which is limiting customers amid the coronavirus pandemic, in Chicago. (AP Photo/Nam Y. Huh, File) 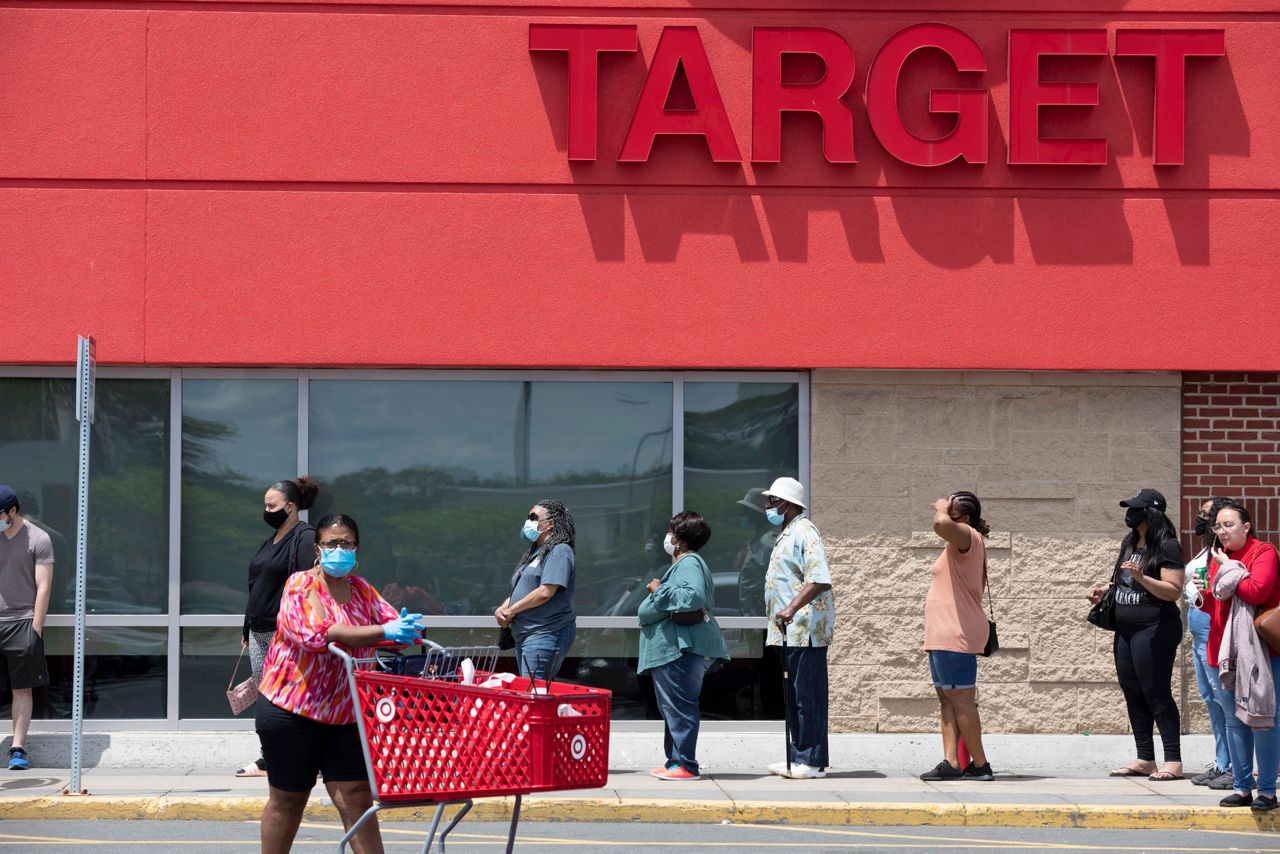 2 of 2
FILE - In this Saturday, May 30, 2020, file photo, people in protective masks line up to enter a Target, in Boston, amid the coronavirus pandemic. (AP Photo/Michael Dwyer, File)

NEW YORK (AP) — When the parent of Southern grocery chain Winn-Dixie said that it wasn't going to require customers to wear masks to protect against the spread of the coronavirus, the response was brutal, with some loyal patrons vowing on social media never to shop there again.

Days later, Winn-Dixie reversed course and said that it would mandate masks in states or localities that had no requirement.

The about-face on Monday followed another highly-publicized reversal last month by AMC. Less than a day after the nation's largest movie theater chain said it would defer to local governments on whether masks should be worn, it came up with a new message in response to social media backlash: Customers who don’t wear masks won’t be admitted or allowed to stay.

Even as pockets of resistance remain, the tide appears to be turning on masks. Three out of four Americans favor requiring people to wear face coverings while outside their homes, according to a survey by The Associated Press-NORC Center for Public Affairs Research. Even President Donald Trump has changed his stance after months of downplaying the importance of masks and igniting a partisan cultural war on the issue.

“Whether you like the mask or not, they have an impact,” he said earlier this week.

As the number of new virus cases have surged in a slew of states, particularly Florida, Texas, California and Arizona, national chains like Walmart, Target and most recently McDonald's are issuing mask mandates as health officials repeatedly advise that covering your nose and mouth can be one of the most effective ways to reduce infections — itself a reversal of earlier messaging at the beginning of the pandemic.

“I believe brands need to pay attention to the new consumer activist," said Stefan Pollack, president of his own Los Angeles-based public relations and marketing company. “Brands no longer have the luxury of staying neutral."

Leslie Fay, 56, a service coordinator for an aging home services company, said she was about to boycott Winn-Dixie when she heard about its initial decision to not require masks.

“It set me off in the wrong direction to know that they were disregarding their employees and customers,” said the Clearwater, Florida resident. “I’m glad they reversed it.”

Southeastern Grocers, the parent company of Winn-Dixie, said that it initially rejected a mask mandate because it didn’t want to put its workers in the position of policing shoppers. But it realized it needed to pay attention to the well-being of its customers, workers and communities. Winn-Dixie's 500 stores are located in Mississippi, Alabama, Louisiana and Georgia in addition to Florida — all states that are grappling with rising coronavirus cases.

"We know masks play an important role in stopping the spread of this virus, and we updated our policy to reflect that," said Joe Caldwell, a spokesman at Southeastern said in an emailed statement.

AMC Theaters CEO Adam Aron said last month that it was clear from the response that “we did not go far enough on the usage of masks.”

“We think it is absolutely crucial that we listen to our guests,” Aron said.

Still, small businesses don't have the luxury of enforcing nationwide policies and are more sensitive to the prevailing sentiment in their regions. And plenty of resistance from shoppers remains, with viral videos of mask-rule defiers continuing to surface on social media.

“There has been a trend that has switched in favor of wearing masks,” said Neil Saunders, managing director of GlobalData Retail. “But there are people whose minds will still not be changed by this. It’s easy to put a policy in place. It’s much harder to enforce it and have your workers on the front lines.”

In fact, the parent of Dollar Tree and Family Dollar went in the opposite direction, loosening its mask restrictions. It had initially started mandating shoppers wear masks along with suppliers and employees in stores, but then changed its policy last week to “request” face coverings in stores where there’s no state or local mandate.

A Dollar Tree Inc. spokesman didn’t respond to emails from The Associated Press, but Saunders believes the company realized its bare-bones staff wouldn't be enough to police the rules. Others think that it wanted to siphon away anti-mask customers from Walmart and others.

A smattering of independent shops and restaurants throughout the country are taking it upon themselves to put up signs that offer unmasked customers an excuse to skirt local rules by pointing out federal health privacy laws that prohibit a business from asking about medical conditions.

“If we see you without a mask, we will assume you have a medical condition and we will welcome you inside to support our business,” reads the sign at Casey’s Restaurant in Roseburg, Oregon, which raised more than $14,000 in a GoFundMe campaign launched in late May to fight legal fines by the Occupational Safety and Health Administration for reopening its restaurant outside of the governor’s orders.

Meanwhile, nearly 7 out of 10 grocery workers said their employers are not enforcing mask mandates in the stores, according to a survey of 4,000 grocery workers between June 22 to June 26 by the United Food and Commercial Workers Union International, which represents grocery workers and meat packers, among others.

Mike Johnson, manager of Tim's Cajun Kitchen in Huntsville, Alabama where he has worked for 19 years, said that he's flexible with the statewide mask mandate.

Before the mandate kicked in last week, about 50% of customers were wearing face coverings; now, it's up to 85%. He doesn't feel comfortable kicking out unmasked customers since most go there for their limited lunch breaks and have other options.

“We would prefer if the customers wear a mask, but if they don't have them, they can come in and have a seat," he said.