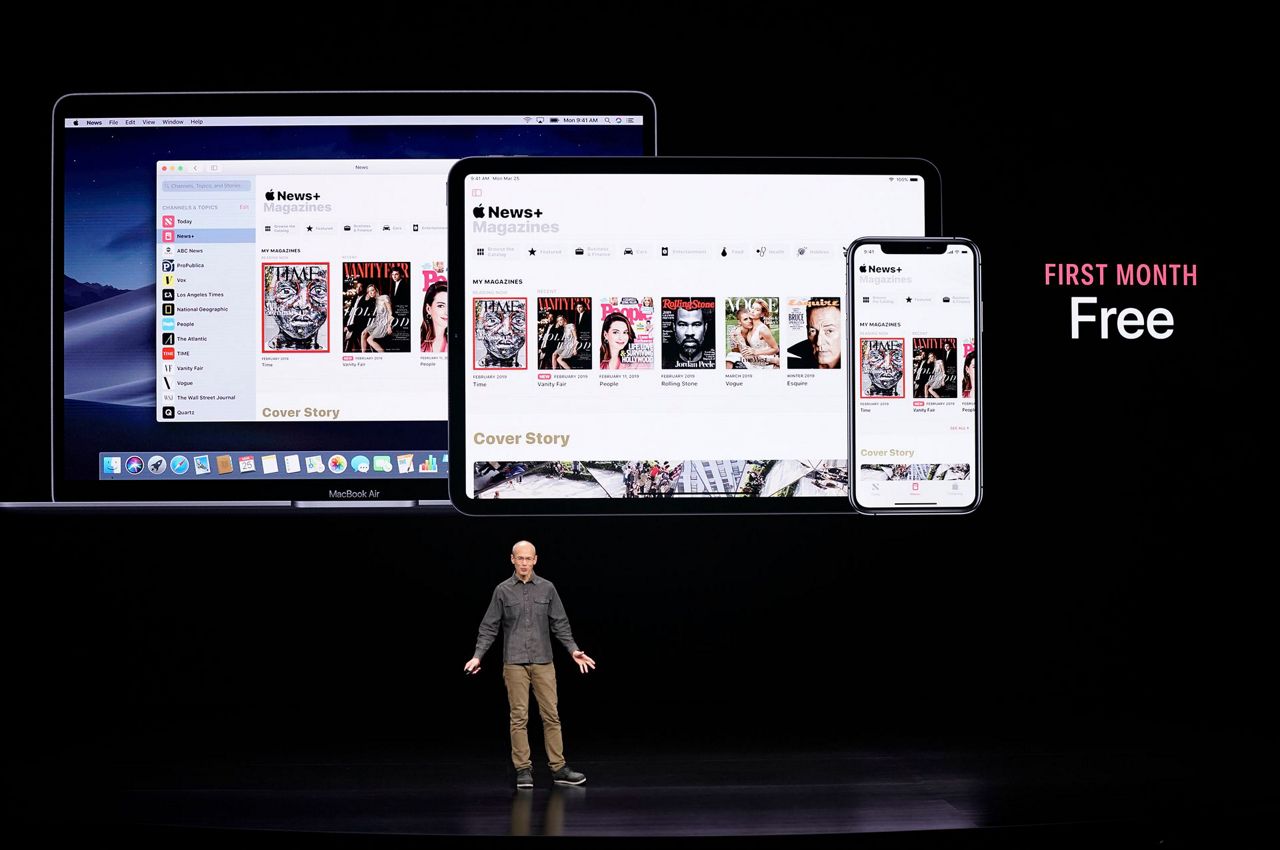 NEW YORK (AP) — Many newspaper publishers — after suffering for a decade from job losses, shrinking ad dollars and circulation declines — are so far shunning Apple's new "Netflix for news" subscription.

For $10 a month, Apple News Plus offers articles from more than 300 magazines, but only three newspapers.

Despite a potential audience of millions of iPhone users, newspaper publishers may be wise to be skeptical.

"Is this the thing that's going to save media? The answer is 'no.' It's not one thing," said Jim Brady, who built a local-news business, Spirited Media, and now consults with media companies.

Media companies have struggled to adapt to readers' shift online and the surge of free articles the web made possible. Even prominent digital-media outlets have had layoffs or been sold off.

More people are getting news through technology platforms such as Facebook. Still, publishers want readers to care about news brands and pay for news and events. For that, they need more control over how they interact with readers. Many publishers want to build their own sites and customer base rather than be at the whim of giant technology companies.

"Publishers have been down this path before, with Facebook," said Tim Franklin, senior associate dean of Northwestern University's Medill School of Journalism.

The three newspapers participating in Apple News Plus are the Los Angeles Times, Toronto Star and The Wall Street Journal — the latter a surprise to many industry watchers.

The Journal, which commands nearly $40 a month for its business and industry coverage, will feature "specially curated" general-interest news on the Apple service. Other stories will still be there, but only when users search for them, Apple said.

The deal gets Journal stories into the hands of people who "most likely would never have a chance to take out a Wall Street Journal membership," said Will Lewis, CEO of the Journal's parent, Dow Jones. (Lewis is also a board member of The Associated Press.)

Lewis is optimistic about Apple's ability to grow the Journal's readership despite many competitors being "down on" the new service. The Journal has tried to chase new readers on other services as well; for example, it has produced stories formulated for Snapchat, a social media service dominated by younger people.

Major newspaper publishers who sat out the launch may feel like they can find readers better on their own, or be wary of the terms of the revenue split with Apple, said Rick Edmonds, a media analyst at the Poynter Institute.

According to published reports, half of the revenue from Apple News Plus subscriptions will go to publishers. Although Apple wouldn't confirm the split, it said the exact amount for each publisher will depend on how much time readers spend with its articles.

The New York Times, one of the most successful among newspapers at navigating the digital era, said it wants a "direct relationship" with readers on its own sites and apps. The Washington Post said it's focused on growing its own subscriber base, and joining the Apple bundle doesn't currently make sense.

Smaller, regional papers will likely look at the experience of the national publications to see if they could benefit, Tuna Amobi of CFRA Research said.

Many local papers are also trying to build relationships with readers that go beyond news — events and community involvement — and that's made more difficult should they find themselves in Apple News Plus' "magic mixer of content," Northwestern's Franklin said.

Apple News Plus could appeal to readers who love magazines and want to sample lots of them. The service will have more than 300 titles, including big names like The New Yorker, Vanity Fair and Vogue. Many of the companies involved say they see it as a way to reach people who wouldn't otherwise subscribe.

"We look at this as net new consumers," said Doug Olson, president of Meredith Magazines, whose publications in the app include Martha Stewart Living, People and Real Simple.

For now, the subscription largely lacks the immediacy of breaking news. Those kinds are articles are already available for free on the existing Apple News app, which brings together articles from around the web. The new service is a paid section of that app in the U.S. and Canada. Apple plans to roll it out in the U.K. and Australia later this year.

Amobi noted that it may take years to see if the Apple subscription does well for media companies, regardless of whether more newspapers join.

Earlier attempts to sell bundled newspaper and magazine subscriptions never took off. Many articles are already available free online, even for publications that sell online subscriptions.

But Apple is still Apple. Its Apple Music service has more than 50 million subscribers despite its late start in music streaming. Getting users to download a new app can be hard, but Apple doesn't have to do that. Apple News already comes installed on iPhones and other Apple devices, and subscribing takes only a few taps.