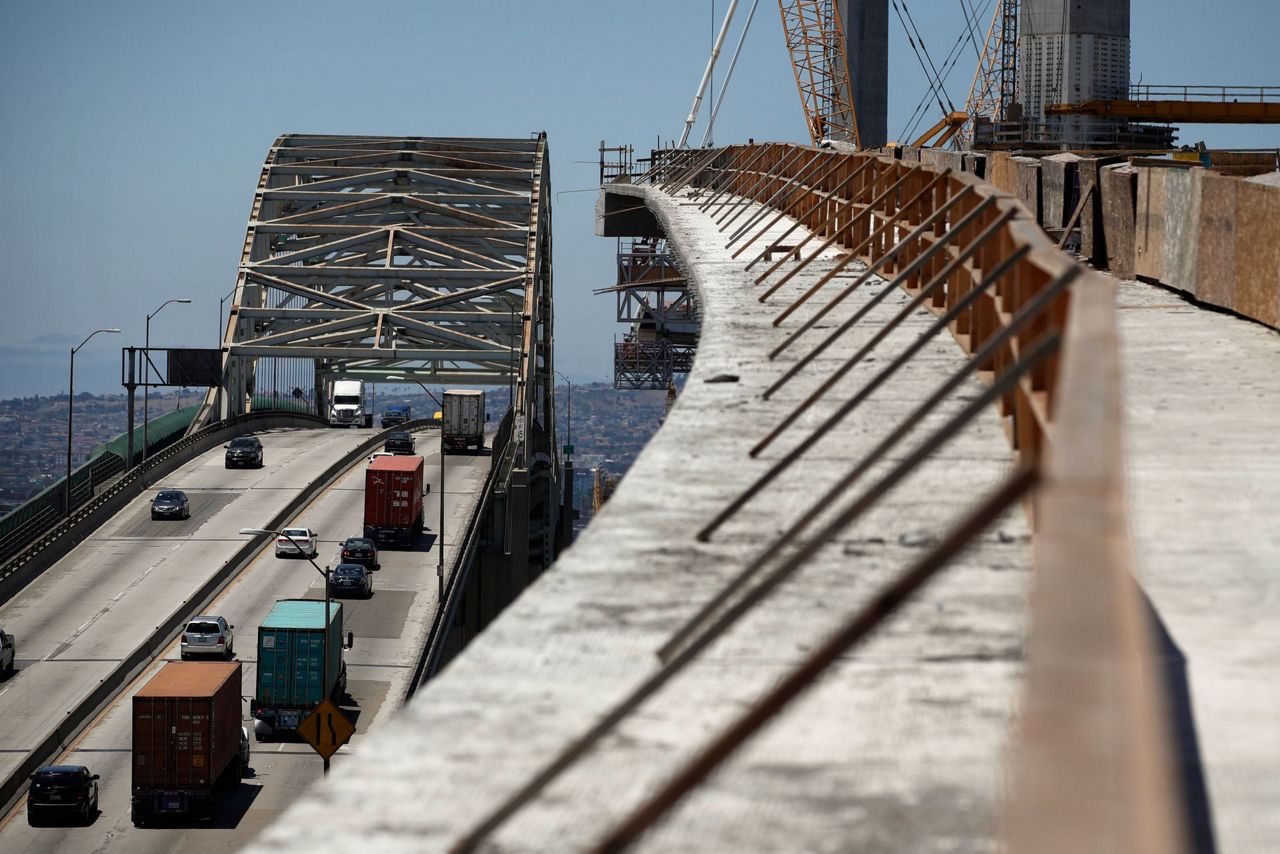 1 of 2
FILE - In this July 2, 2018, file photo, traffic moves on the old Gerald Desmond Bridge next to its replacement bridge under construction in Long Beach, Calif. President Donald Trump pronounced himself eager to work with Congress on a plan to rebuild America’s crumbling roads and bridges, but offered no specifics during his State of the Union speech on what kind of deal he would back. (AP Photo/Jae C. Hong, File) 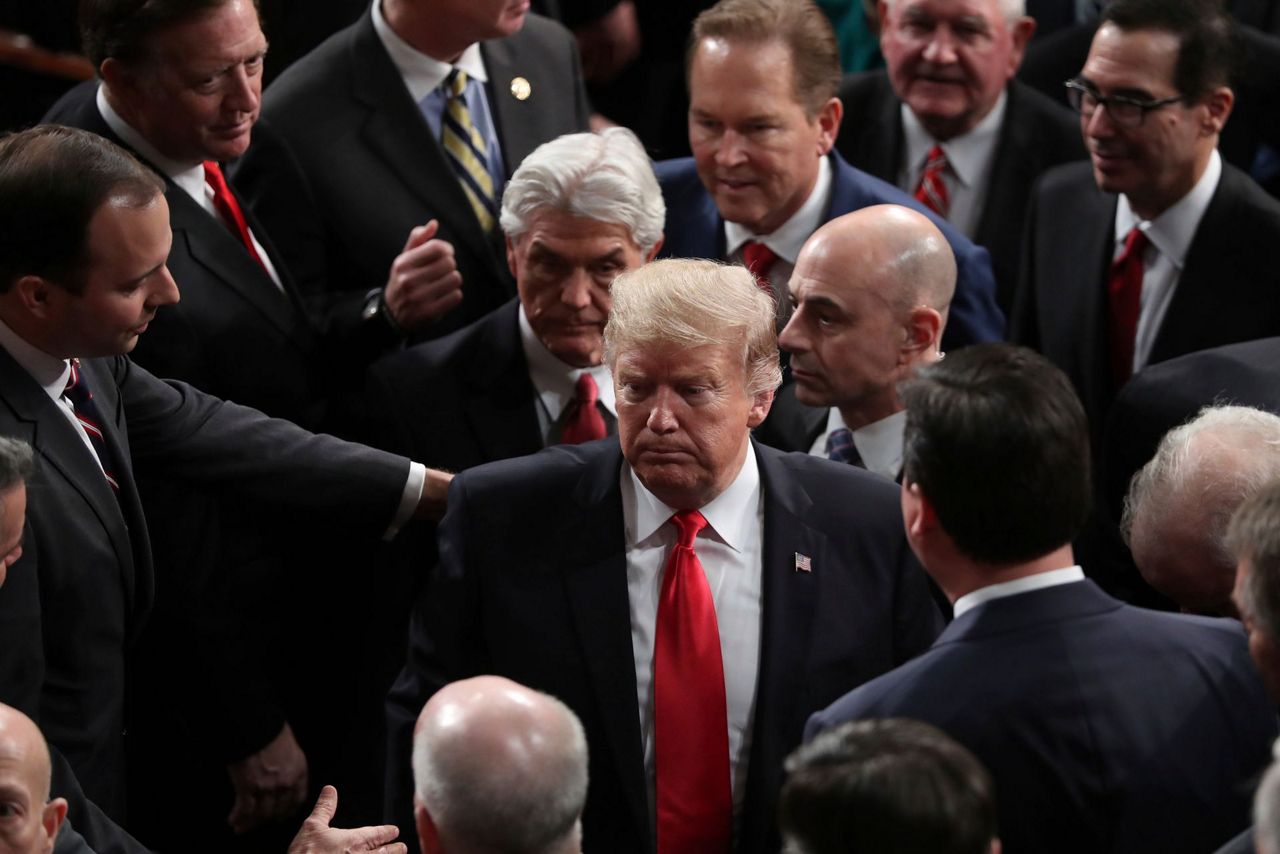 2 of 2
President Donald Trump departs after the State of the Union address to a joint session of Congress on Capitol Hill in Washington, Tuesday, Feb. 5, 2019. (AP Photo/Andrew Harnik)

Infrastructure bill faces many potholes in months ahead

WASHINGTON (AP) — President Donald Trump pronounced himself eager to work with Congress on a plan to rebuild America's crumbling roads and bridges, but offered no specifics during his State of the Union speech on what kind of deal he would back. The question now is whether lawmakers and the president are finally ready to move beyond complaining about the nation's infrastructure problem and actually do something about it.

Lawmakers from both parties are expressing hope about reaching an agreement, but the key will be whether they and the president can figure out how to pay for it. Trump's initial proposal made little progress in the last Congress as Republicans were content to rely on their tax cuts and the strong economy to make their case to voters in the midterm elections. Democratic lawmakers, for their part, considered Trump's plan inadequate and unrealistic.

Now, high-powered interest groups like the U.S. Chamber of Commerce are trying to jumpstart momentum on the issue, and congressional committees in both chambers are scheduling hearings.

Rep. Lloyd Doggett, D-Texas, said Trump's leadership will be critical because only he can win over enough Republicans to get a deal done. He added that wherever the money for infrastructure is to come from, it will take Trump's "full and unqualified commitment to give Republicans enough cover to vote for it," Doggett said.

Trump struck a bipartisan tone during his State of the Union address with pleas for action on infrastructure, prescription drug pricing and ending the spread of HIV that seemed aimed at centrist voters.

For now, it looks like lawmakers will have to come up with many of the details.

"The president wants Congress to come together and craft a bipartisan infrastructure package that rebuilds crumbling infrastructure, invests in the projects and industries of tomorrow, and promotes permitting efficiency," said White House spokesman Judd Deere.

Rep. Peter DeFazio, the Democratic chairman of the House Transportation and Infrastructure Committee, said he'll work to build a bipartisan deal, and he's not concerned about giving Trump a legislative victory before next year's elections.

"He can't claim all the credit since they had total control for two years and did nothing," DeFazio said of Republicans.

The administration's proposal last year centered on using $200 billion in federal money over 10 years to stimulate $1.5 trillion in total infrastructure spending. The plan was heavily dependent on state and local dollars. But an analysis from the Penn Wharton Budget Model cast doubt on the idea that the proposed federal grants would come anywhere close to generating the extra state and local investments predicted by the administration.

Trump himself didn't sell the plan aggressively and described it initially as a lesser priority than boosting military spending and cutting taxes and regulation. He did not lay out any specific infrastructure proposal Tuesday, but noted the bipartisan appeal of the subject and stressed that he was eager to work with lawmakers. "Both parties should be able to unite for a great rebuilding of America's crumbling infrastructure," he said to applause.

On the same day, Chamber of Commerce President Thomas Donohue laid out what the influential business group could support — and would oppose. Donohue said that paying for infrastructure by rescinding the tax cuts Trump and Republicans passed in 2016 "is a nonstarter for the business community and for many in Congress."

"Pulling back from tax reform to fund infrastructure is one step forward and two steps back. We're not going to do that," he said.

Donohue made a pitch for a "modest increase" in the federal gas tax. He said the tax hasn't increased since 1993 and that raising the gas tax by 25 cents would generate $394 billion over the next decade. The federal tax on gasoline now stands as 18.3 cents per gallon and at 24.3 cents per gallon for diesel fuel.

Donohue said dozens of states have passed higher gas taxes over the years to make infrastructure improvements and that people are willing to pay more for safer roads, lighter traffic and less wear and tear on their vehicles.

"We believe this is the simplest, most commonsense solution out there," Donohue said.

Congress has been reluctant to go that route. Instead, lawmakers have transferred money from the U.S. Treasury's general fund to supplement the Highway Trust Fund, which finances most federal spending for highways and mass transit. The last highway bill provided $70 billion in transfers through Oct. 1, 2020.

Indeed, GOP leaders have been so opposed to increasing the gas tax that they have even sought to undercut state efforts to do so. Minority Leader Kevin McCarthy, R-Calif., and former Speaker Paul Ryan financially backed an election initiative California last November that would have repealed an increase in fuel taxes and vehicle fees designed to fund $5 billion in transportation projects a year.

While McCarthy and Ryan lost that effort, it's a reminder that lawmakers and political strategists see higher fuel taxes as a potentially valuable weapon during election season.

"They are afraid. They're scared. 'My God, if we raise the federal gas tax I might lose my election,'" DeFazio said of many lawmakers' mindset.