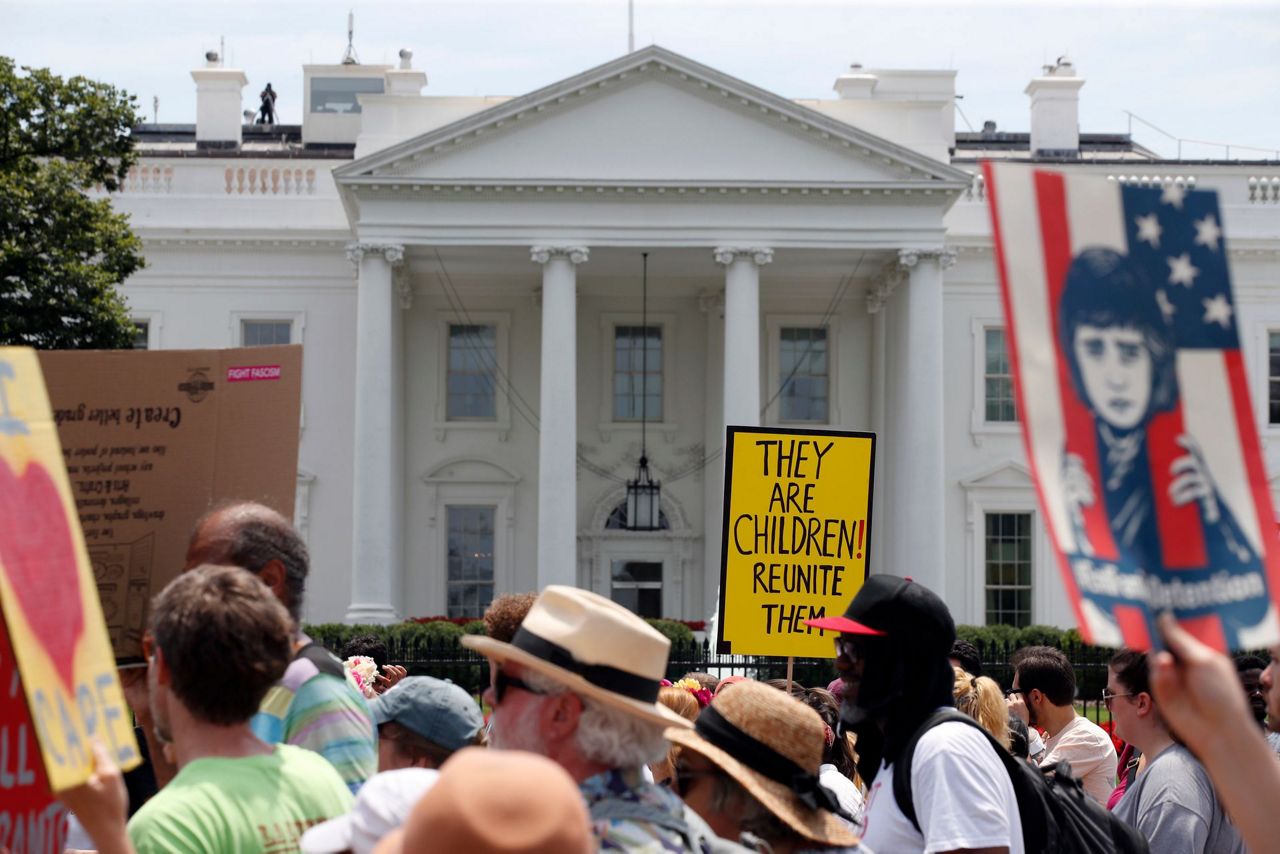 1 of 16
Activists march past the White House to protest the Trump administration's approach to illegal border crossings and separation of children from immigrant parents, Saturday, June 30, 2018, in Washington. (AP Photo/Alex Brandon) 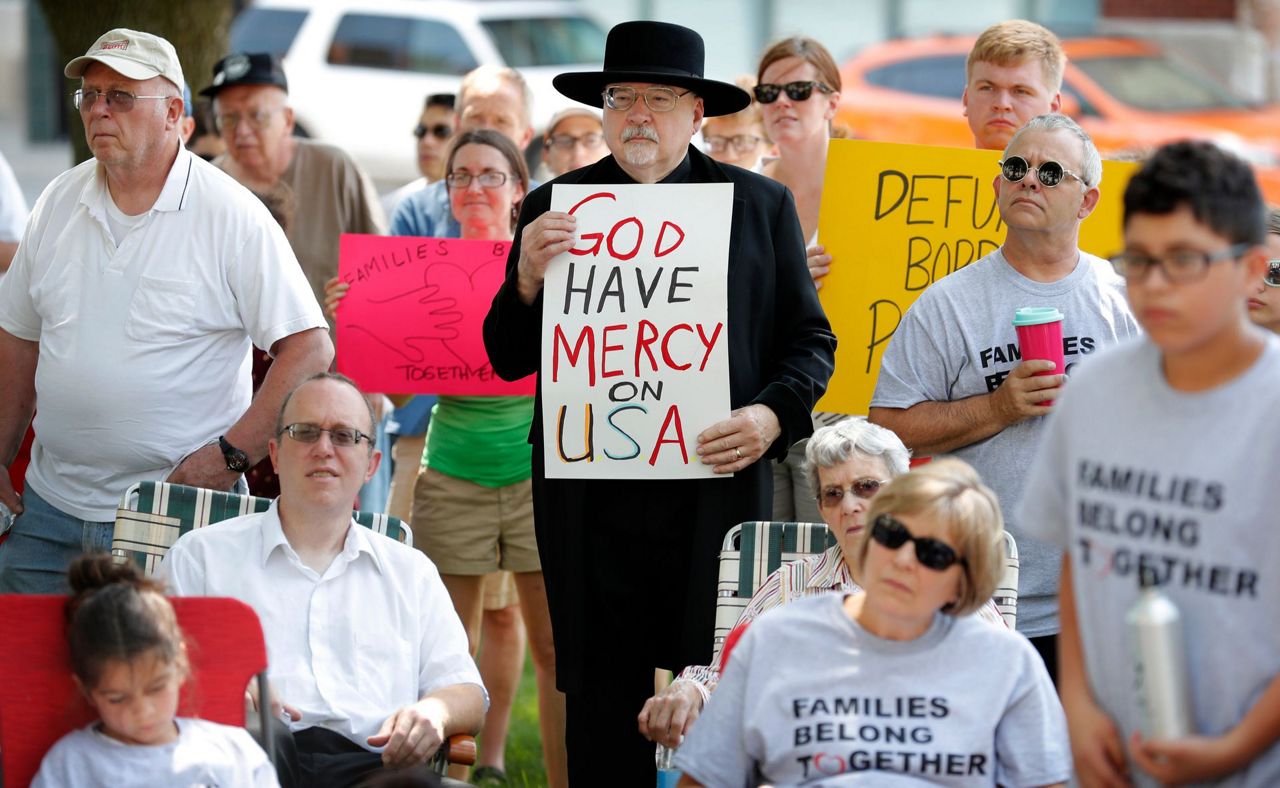 2 of 16
Walden Paige, of Marshalltown, Iowa, center, looks on during a rally to protest the Trump administration's immigration policies, Saturday, June 30, 2018, outside the Marshall County Courthouse in Marshalltown, Iowa. (AP Photo/Charlie Neibergall) 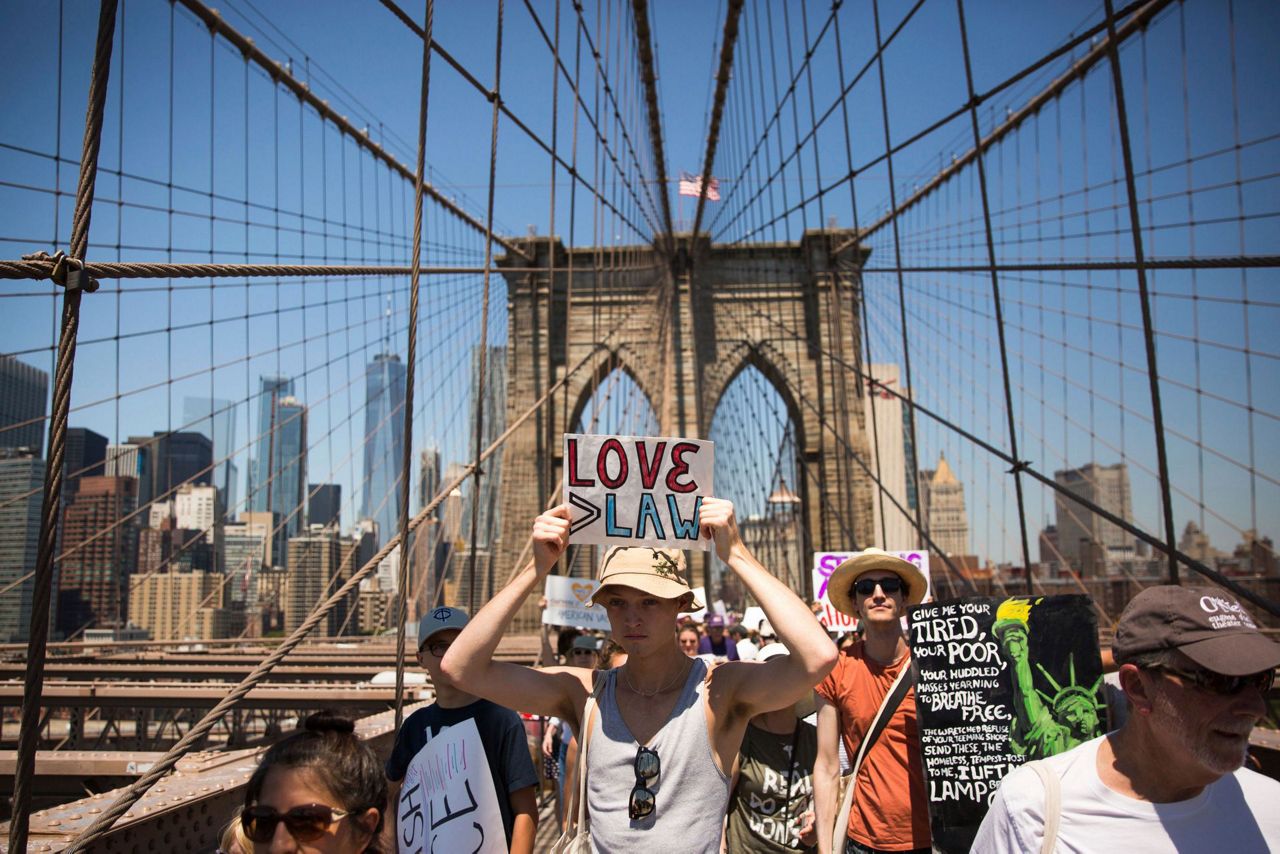 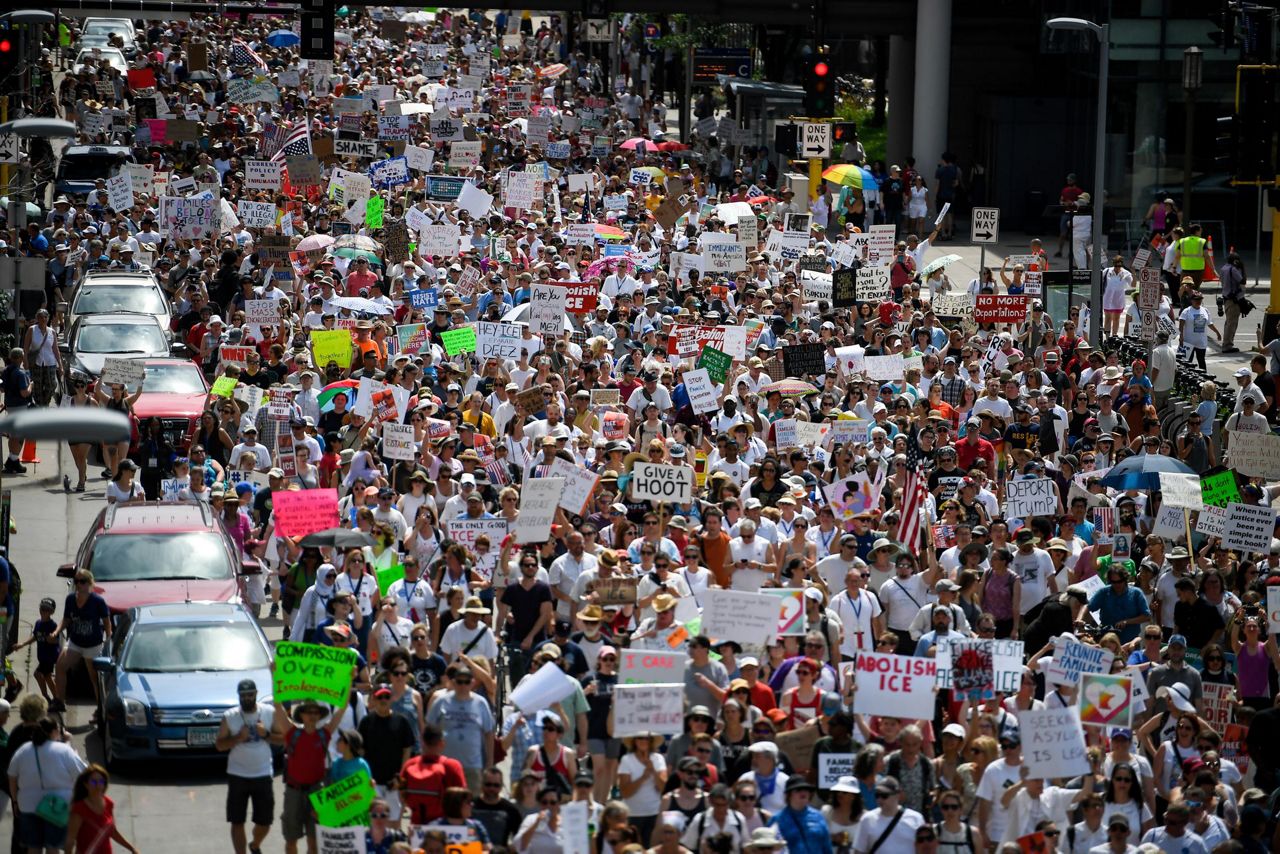 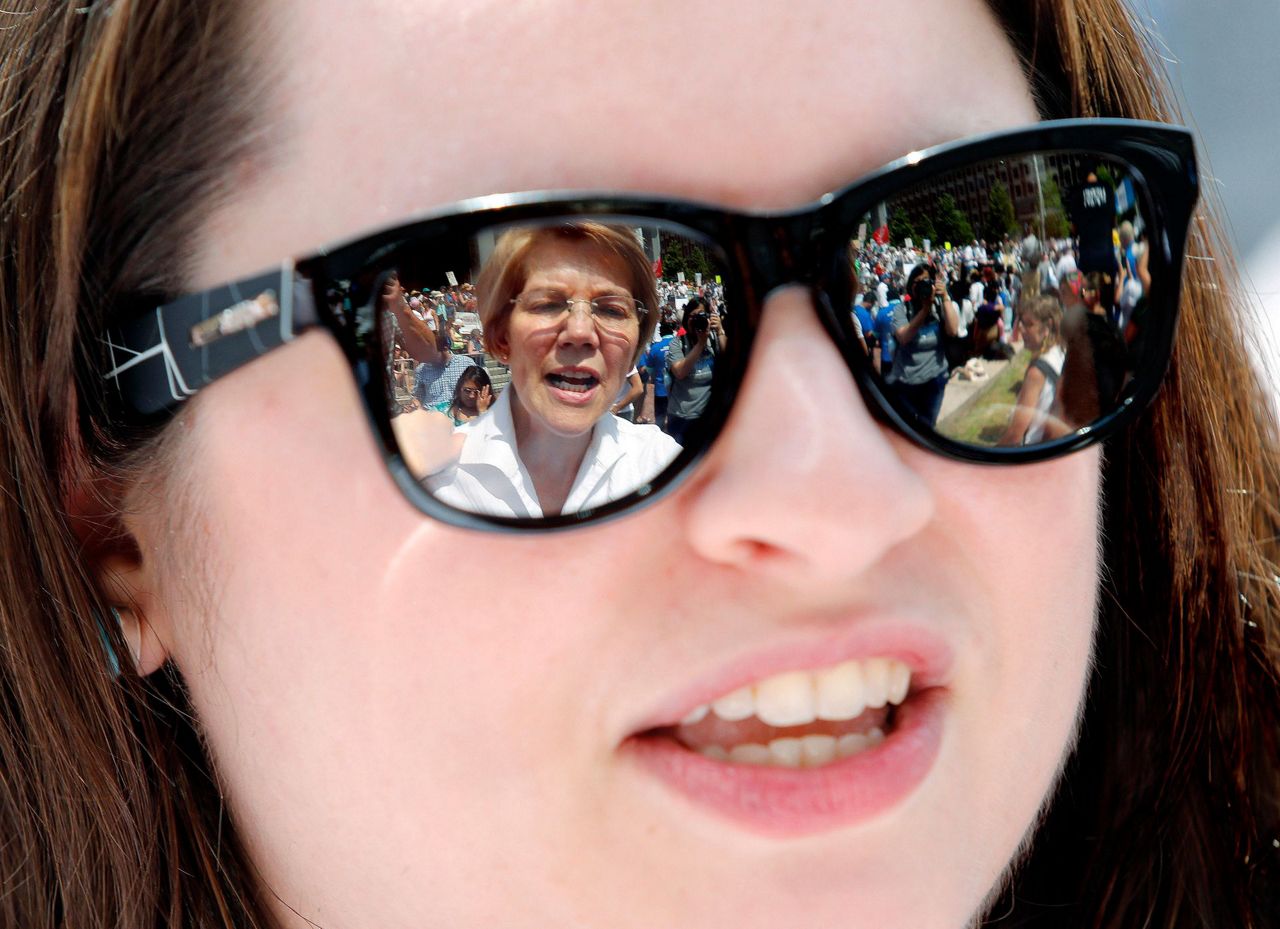 5 of 16
Sen. Elizabeth Warren, D-Mass., is seen in the sunglasses of Arian Rustemi while speaking with her during the Rally Against Separation Saturday, June 30, 2018 in Boston. Warren is calling for swift reunification of children and parents at the Massachusetts immigration rally. (AP Photo/Winslow Townson) 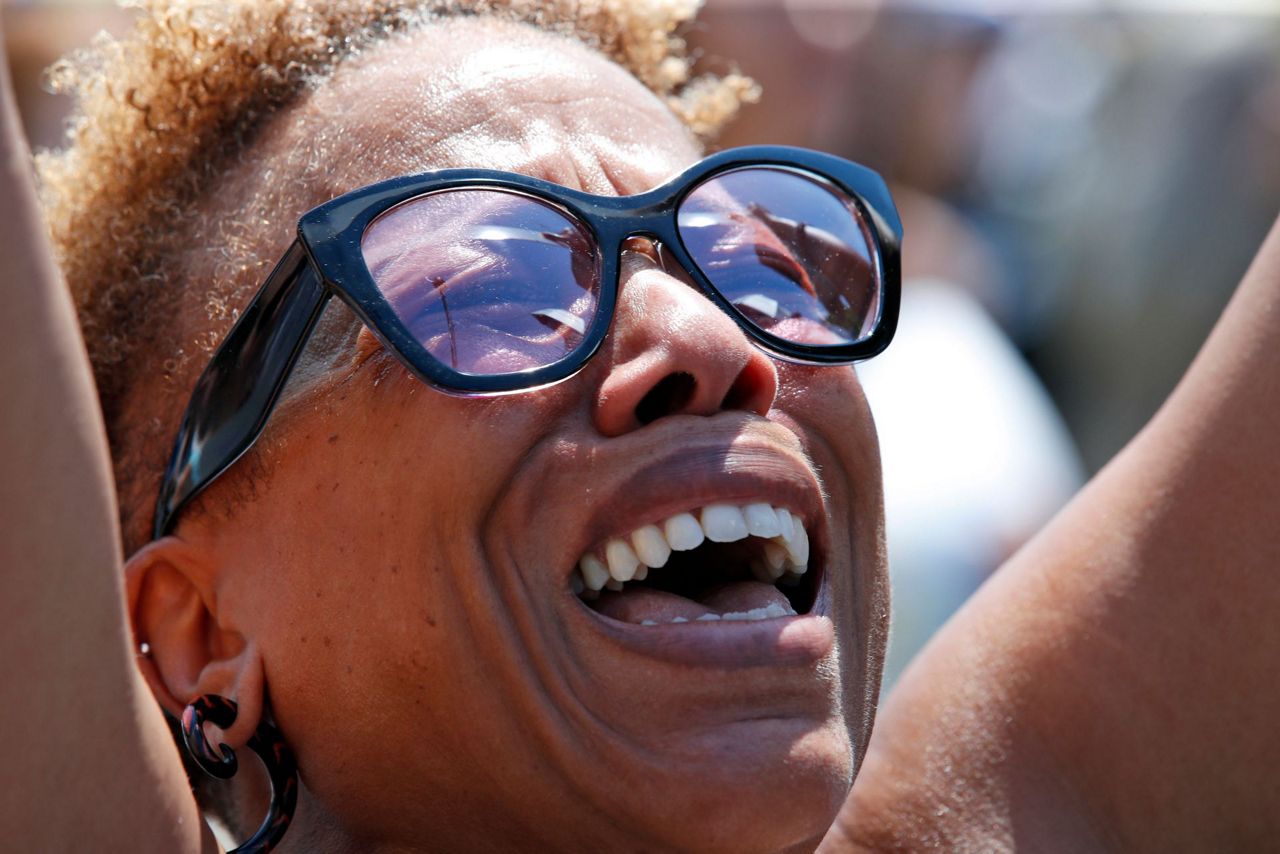 6 of 16
Belinda Brown-Payne, from Silver Spring, Md., reacts to speakers during a protest of the Trump administration's approach to illegal border crossings and separation of children from immigrant parents in Lafayette Square across from the White House, Saturday, June 30, 2018, in Washington. (AP Photo/Alex Brandon) 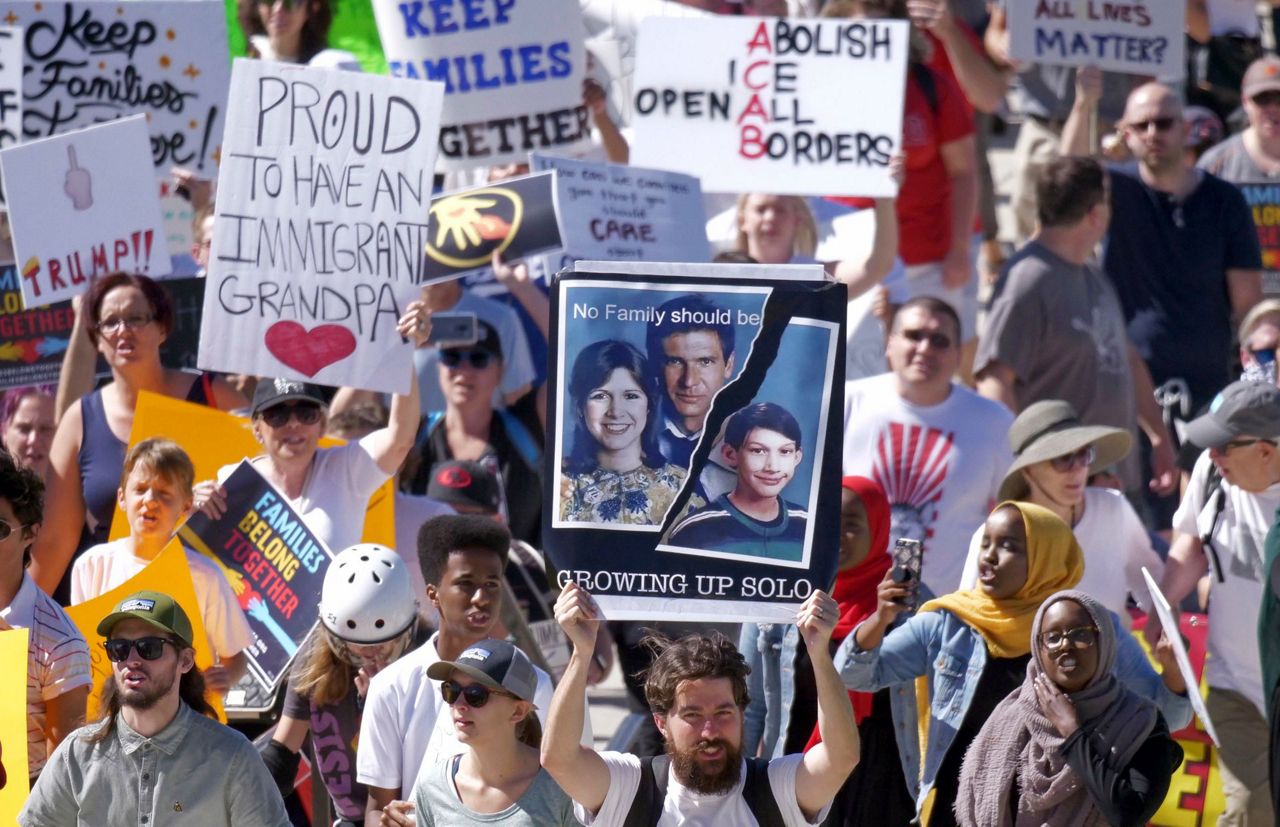 7 of 16
Activists, including one holding a "Star Wars"-themed sign, gather during a rally to protest the Trump administration's approach to illegal border crossings and separation of children from immigrant parents Saturday, June 30, 2018, in Salt Lake City. (AP Photo/Rick Bowmer) 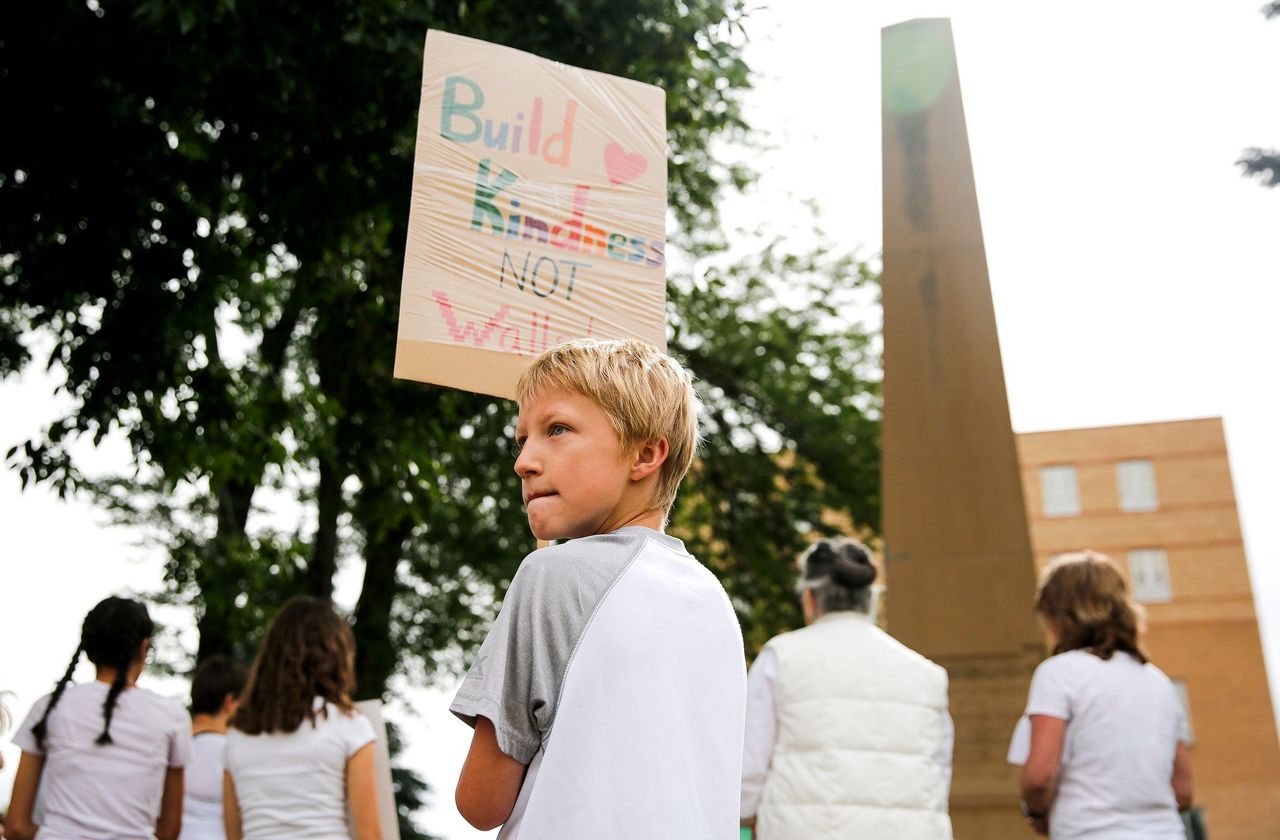 8 of 16
Jack Egan, 10, gathers with others in Pioneer Park for an immigration rally in Casper, Wyo., on Saturday morning, June 30, 2018. In major cities and tiny towns, marchers gathered across America, moved by accounts of children separated from their parents at the U.S.-Mexico border, in the latest act of mass resistance against President Donald Trump's immigration policies. (Josh Galemore/The Casper Star-Tribune via AP) 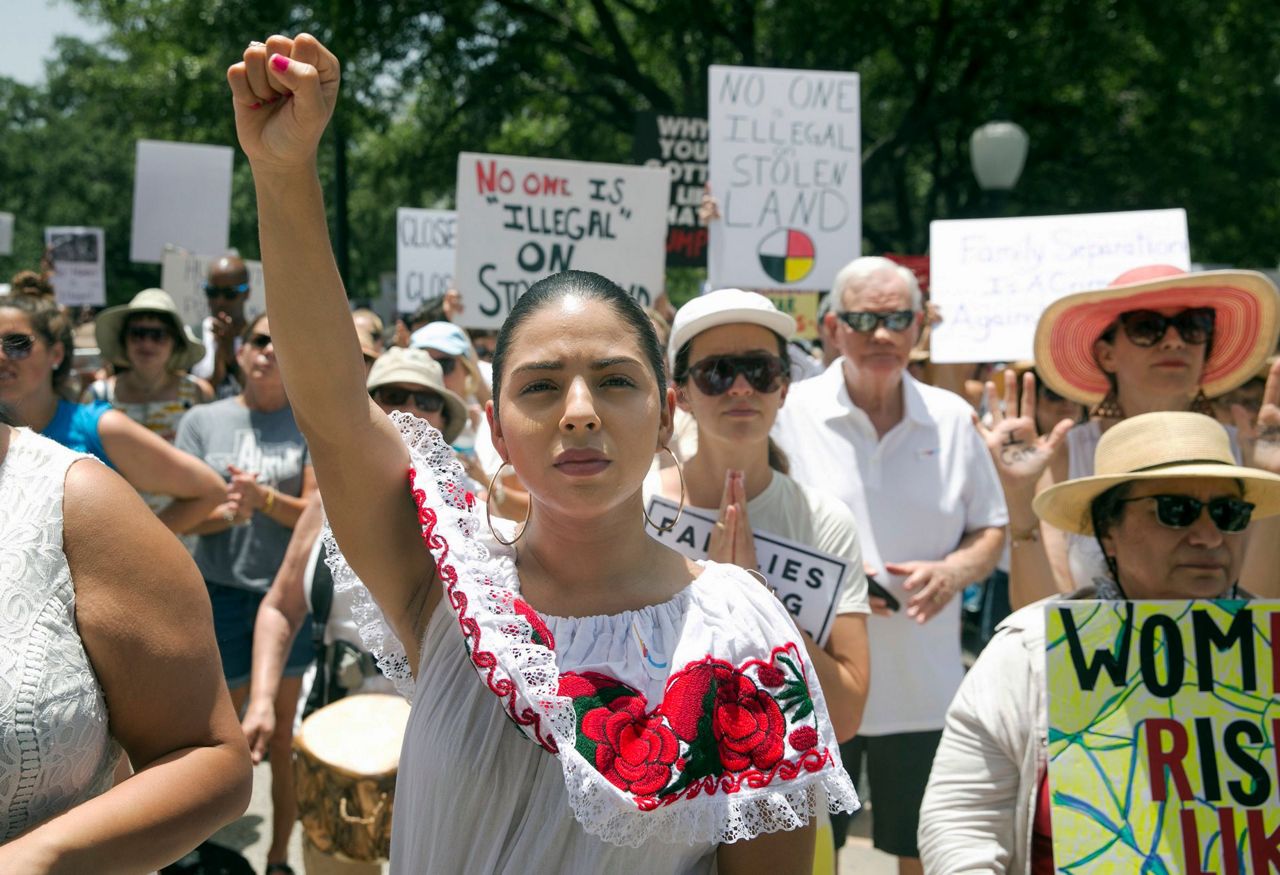 9 of 16
Maria Montelongo raises her fist at the Families Belong Together rally at the Capitol in Austin, Texas, on Saturday, June 30, 2018. Thousands gathered at the Capitol to protest family separations on the border. (Jay Janner/Austin American-Statesman via AP) 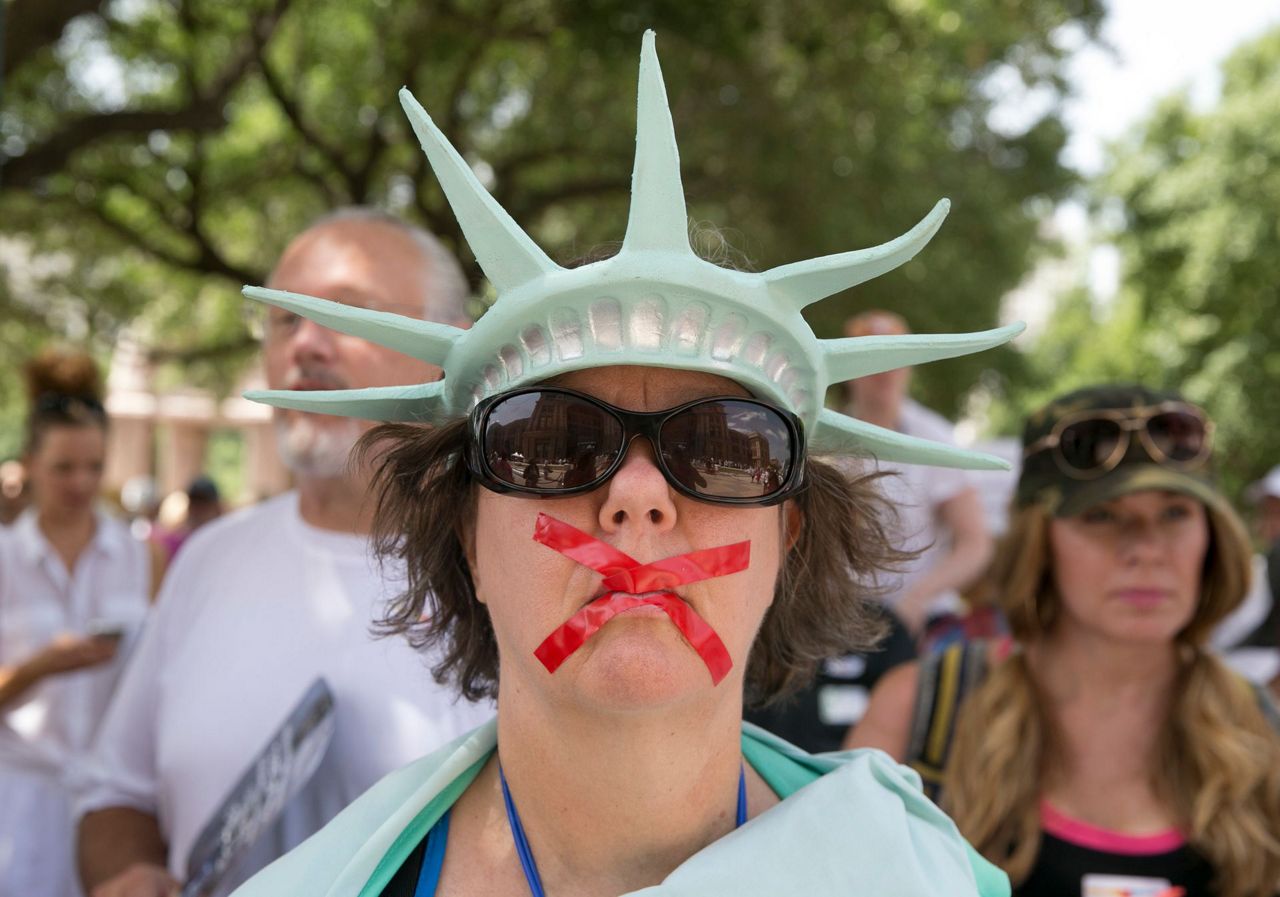 10 of 16
Deborah Campbell, dressed as the Statue of Liberty with red tape over her mouth, attends the Families Belong Together rally at the Capitol in Austin, Texas, on Saturday, June 30, 2018. Thousands gathered at the Capitol to protest family separations on the border. (Jay Janner/Austin American-Statesman via AP) 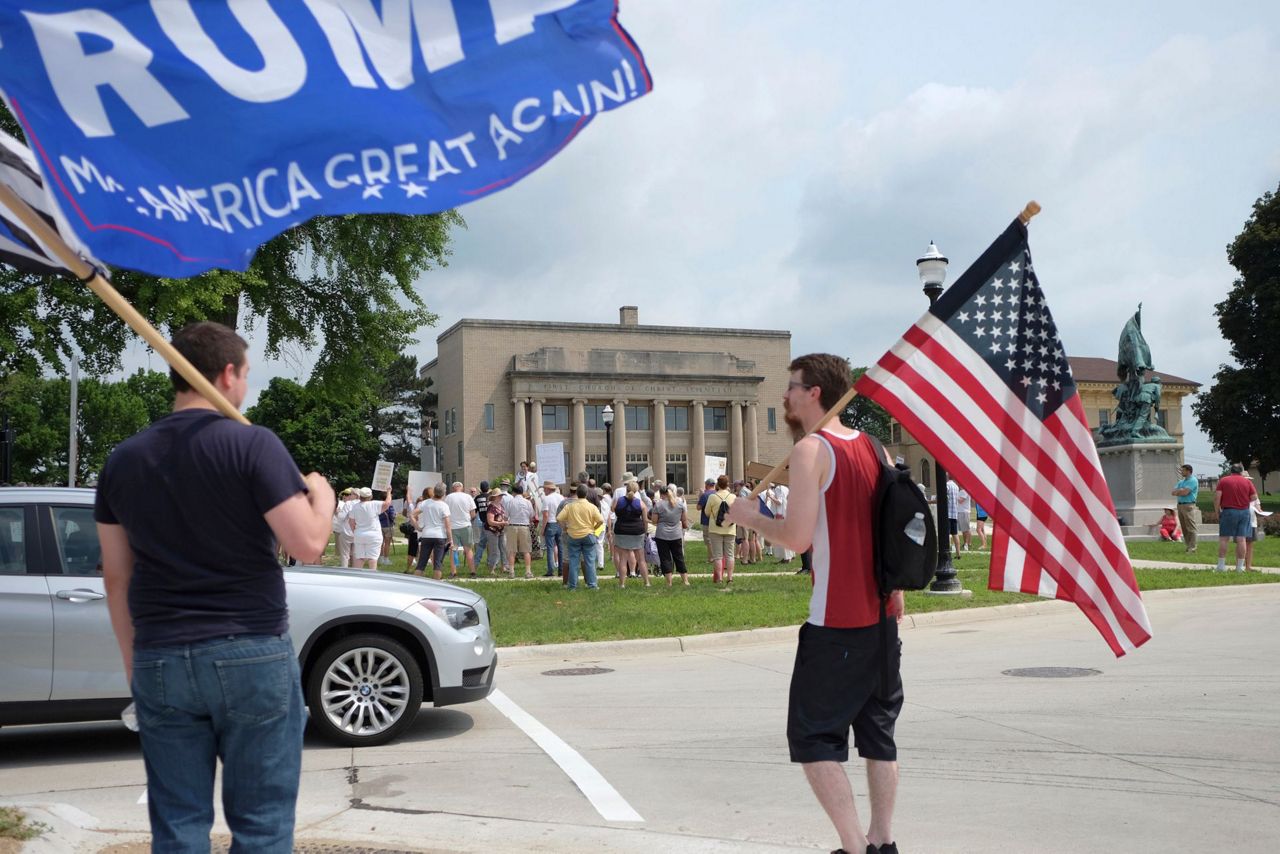 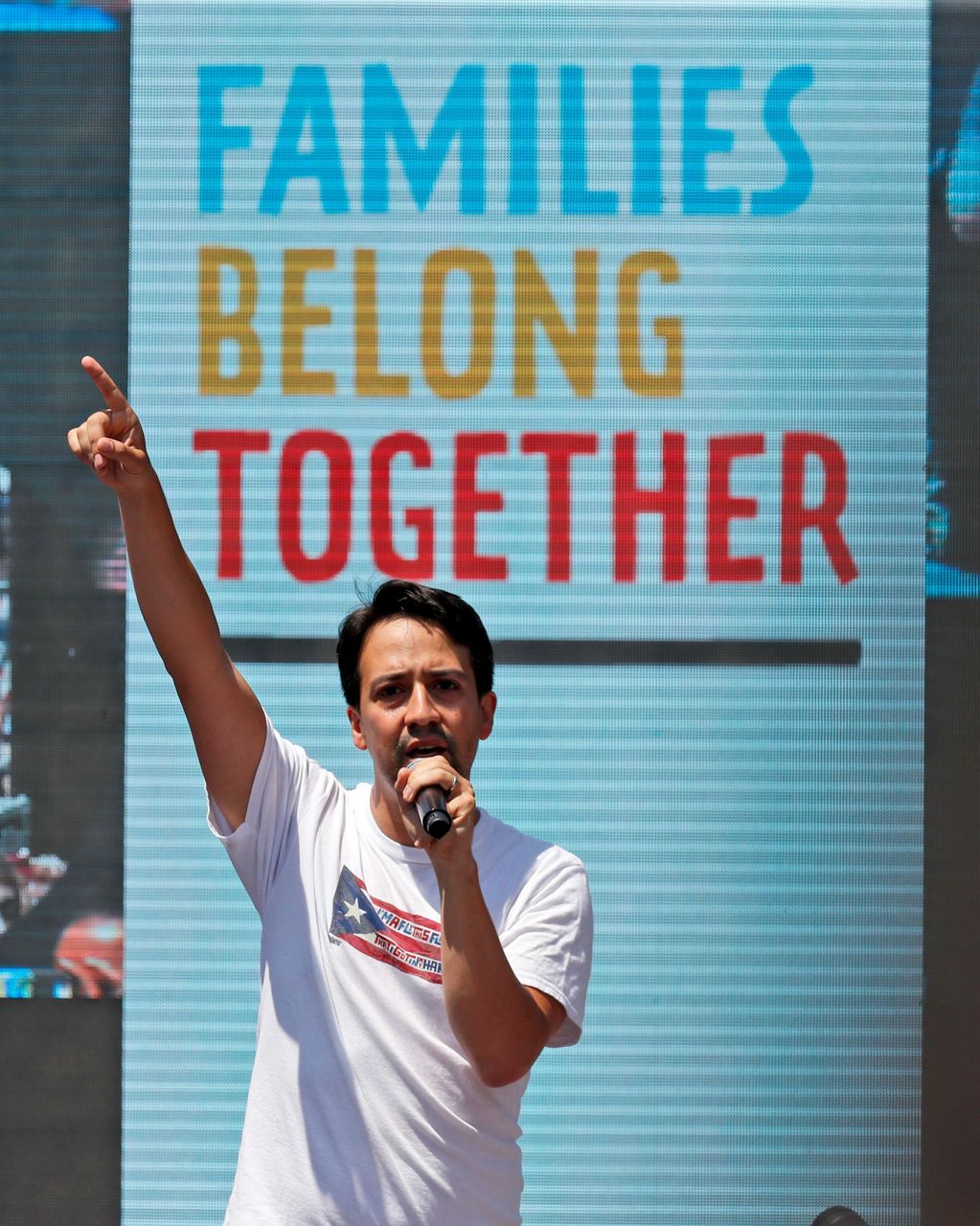 12 of 16
Lin-Manuel Miranda speaks during a protest of the Trump administration's approach to illegal border crossings and separation of children from immigrant parents in Lafayette Square across from the White House, Saturday, June 30, 2018, in Washington. (AP Photo/Alex Brandon) 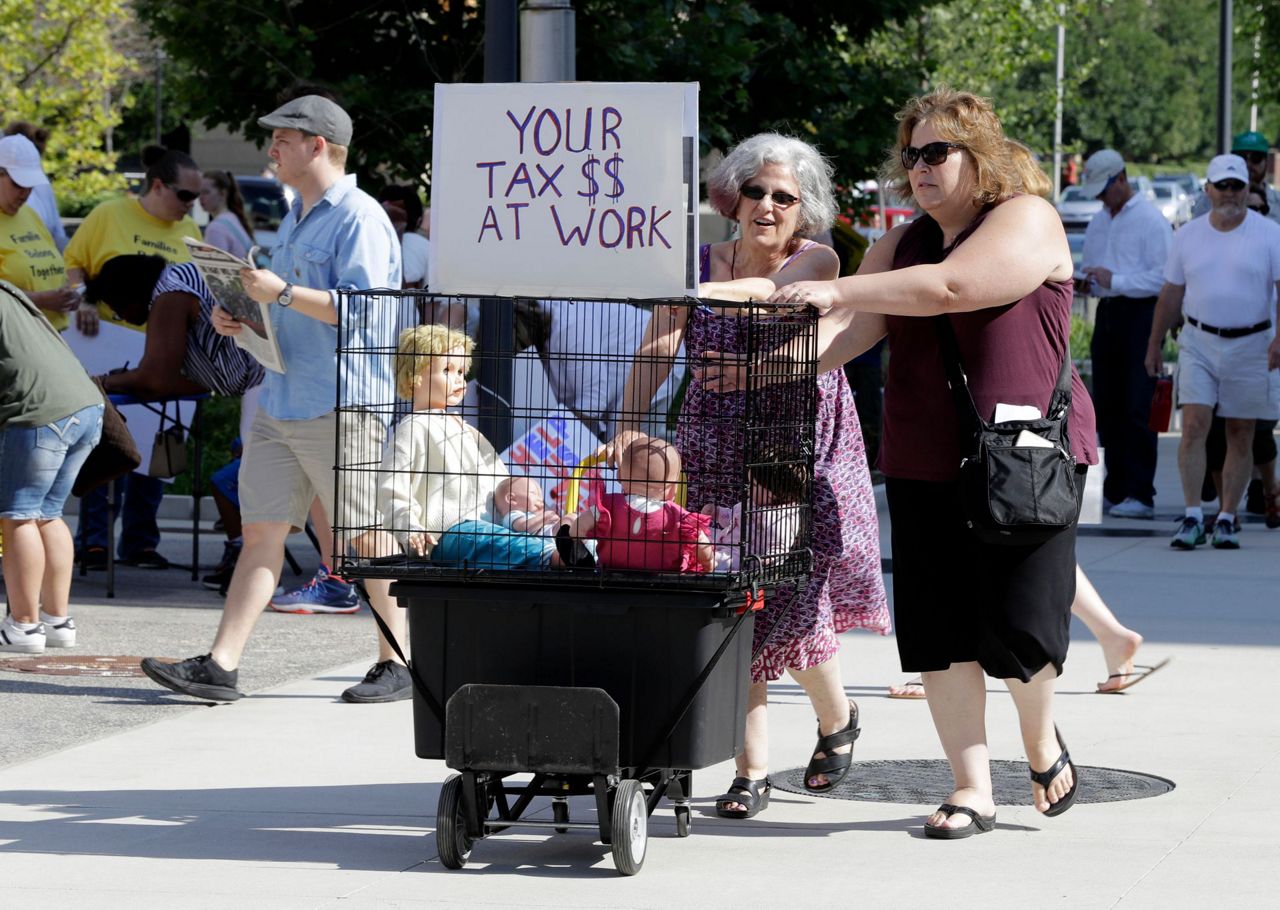 13 of 16
Deborah Langerman and Cara Hwang push a cart to a protest of the Trump administration's approach to illegal border crossings and separation of children from immigrant parents at the Statehouse, Saturday, June 30, 2018, in Indianapolis. (AP Photo/Darron Cummings) 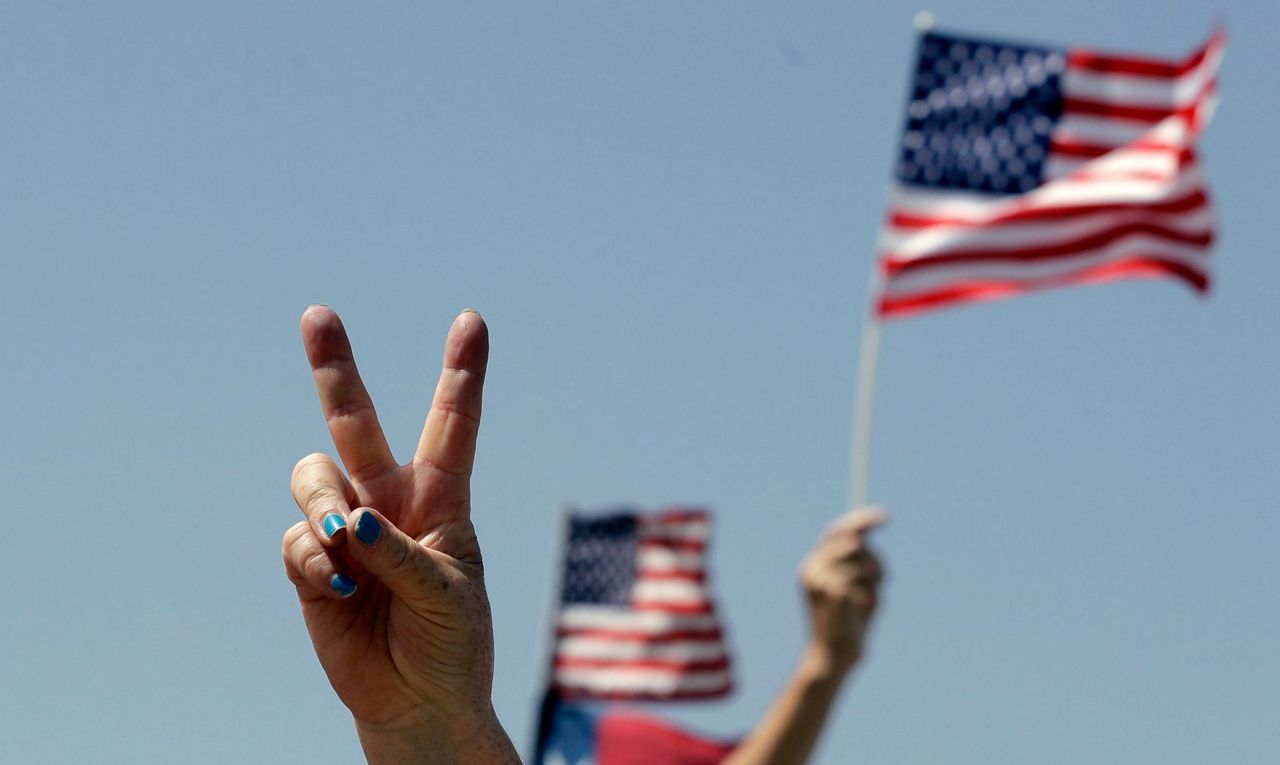 14 of 16
Protesters gather near a U.S. Customs and Border Protection station to speak out against immigration policy, Saturday, June 30, 2018, in McAllen, Texas. (AP Photo/Eric Gay) 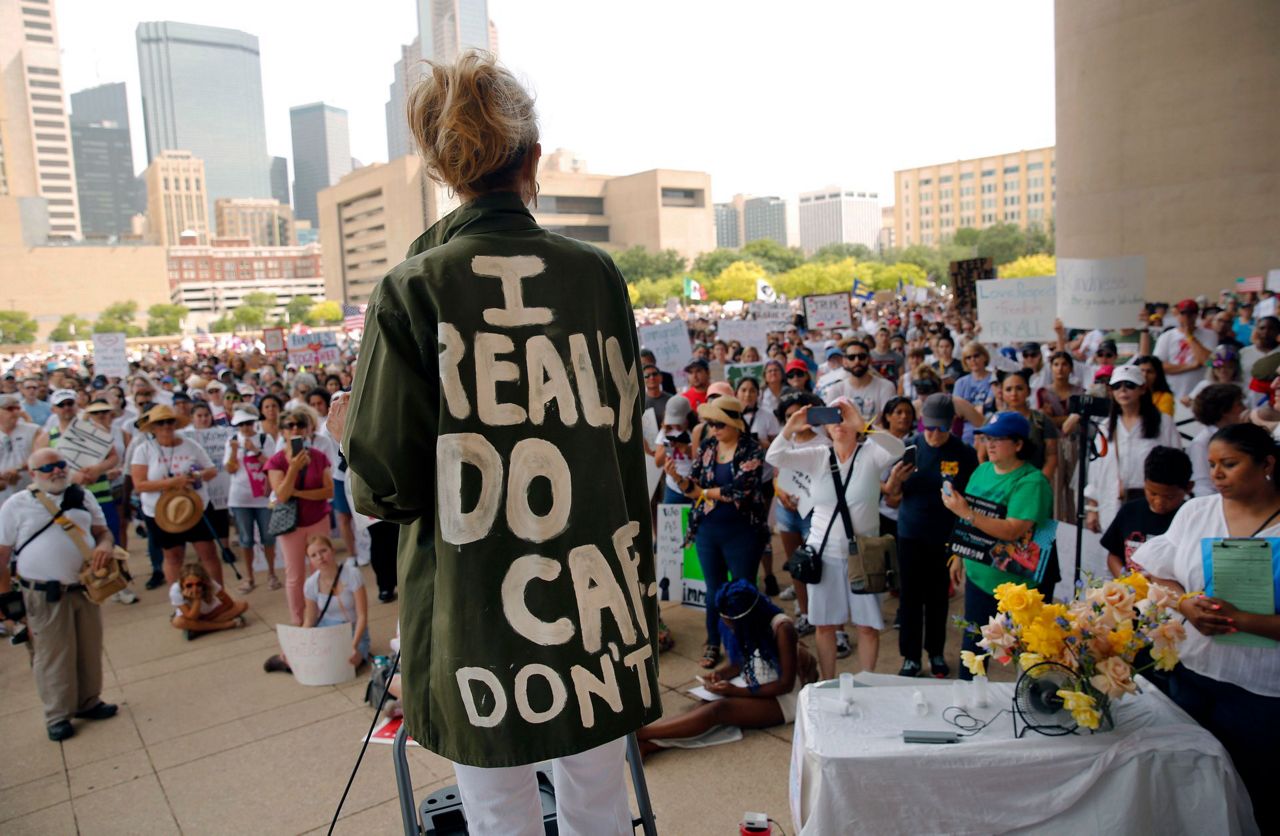 15 of 16
Actress and activist Cheryl Allison wears a "I Really DO Care, Don't U" green jacket as she speakes during the Keep Families Together rally at Dallas City Hall Saturday, June 30, 2018. The jacket mocks the one First Lady Melania Trump wore which said the opposite. The rally and march was part of a nationwide effort protesting President Donald Trump's 'zero-tolerance' border policy. (Tom Fox/The Dallas Morning News via AP) 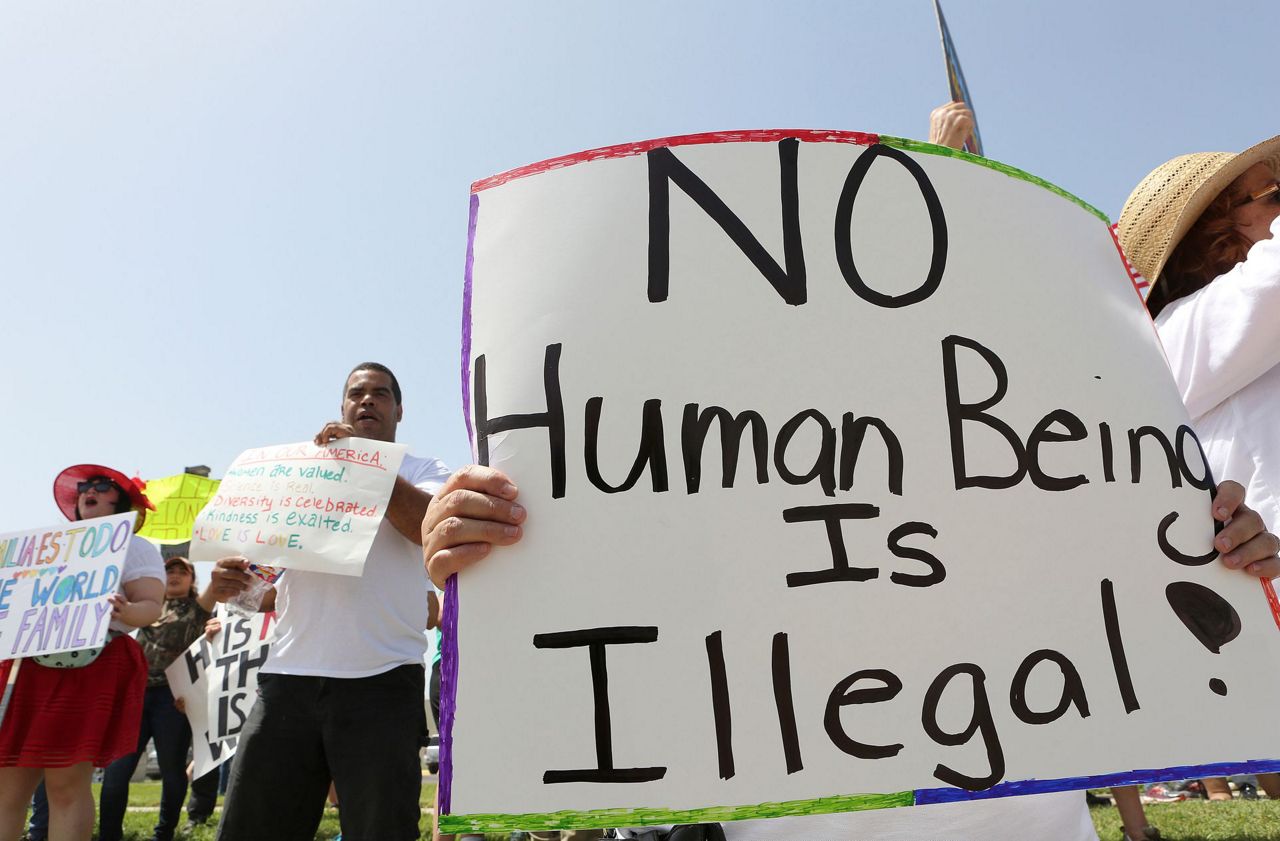 16 of 16
Protestors demonstrate in front of the U.S. Border Patrol Station on Saturday, June 30, 2018, in McAllen, Texas. They rallied to bring awareness to the U.S. Immigration policy of family separations along the southern border. (Joel Martinez/The Monitor via AP)

WASHINGTON (AP) — They wore white. They shook their fists in the air. They carried signs reading: "No more children in cages," and "What's next? Concentration Camps?"

In major cities and tiny towns, hundreds of thousands of marchers gathered Saturday across America, moved by accounts of children separated from their parents at the U.S.-Mexico border, in the latest act of mass resistance against President Donald Trump's immigration policies.

Protesters flooded more than 700 marches, from immigrant-friendly cities like New York and Los Angeles to conservative Appalachia and Wyoming. They gathered on the front lawn of a Border Patrol station in McAllen, Texas, near a detention center where migrant children were being held in cages, and on a street corner near Trump's golf resort at Bedminster, New Jersey, where the president is spending the weekend.

Trump has backed away from family separations amid bipartisan and international uproar. His "zero tolerance policy" led officials to take more than 2,000 children from their parents as they tried to enter the country illegally, most of them fleeing violence, persecution or economic collapse in their home countries.

Those marching Saturday demanded the government quickly reunite the families that were already divided.

A Brazilian mother separated from her 10-year-old son more than a month ago approached the microphone at the Boston rally.

"We came to the United States seeking help, and we never imagined that this could happen. So I beg everyone, please release these children, give my son back to me," she said through an interpreter, weeping.

"Please fight and continue fighting, because we will win," she said.

In Washington, D.C., an estimated 30,000 marchers gathered in Lafayette Park across from the White House in what was expected to be the largest protest of the day, stretching for hours under a searing sun. Firefighters at one point misted the crowd to help people cool off.

Lin-Manuel Miranda, creator of the musical "Hamilton," sang a lullaby dedicated to parents unable to sing to their children. Singer-songwriter Alicia Keys read a letter written by a woman whose child had been taken away from her at the border.

"It's upsetting. Families being separated, children in cages," said Emilia Ramos, a cleaner in the district, fighting tears at the rally. "Seeing everyone together for this cause, it's emotional."

Around her, thousands waved signs: "I care," some read, referencing a jacket that first lady Melania Trump wore when traveling to visit child migrants. The back of her jacket said, "I really don't care, do U?" and it became a rallying cry for protesters Saturday.

"I care!! Do you?" read Joan Culwell's T-shirt as she joined a rally in Denver.

"This is the issue crossing the line for a lot of people," said Robin Jackson, 51, of Los Angeles, who protested with thousands carrying flags, signs and babies.

Singer John Legend serenaded the crowd and Democratic politicians who have clashed with Trump had strong words for the president, including U.S. Rep. Maxine Waters who called for his impeachment.

The president took to Twitter amid the protests, first to show his support for Immigration and Customs Enforcement as some Democrats called for major changes to the agency. Tweeting Saturday from New Jersey, Trump urged ICE agents to "not worry or lose your spirit" and wrote that "the radical left Dems want you out. Next it will be all police."

He later tweeted that he never pushed House Republicans to vote for immigration overhaul measures that failed last week, contradicting a post three days ago in which he urged GOP congressional members to pass them.

In Trump's hometown of New York City, another massive crowd poured across the Brooklyn Bridge in sweltering 90-degree heat, some carrying their children on their shoulders, chanting, "Shame!" Drivers honked their horns in support.

"It's important for this administration to know that these policies that rip apart families — that treat people as less than human, like they're vermin — are not the way of God, they are not the law of love," said the Rev. Julie Hoplamazian, an Episcopal priest marching in Brooklyn.

Though seasoned anti-Trump demonstrators packed the rallies, others were new to activism, including parents who said they felt compelled to act after heart-wrenching accounts of families who were torn apart.

Marchers took to city parks and downtown squares from Maine to Florida to Oregon; in Alaska, Hawaii and Puerto Rico; on the international bridge between El Paso, Texas, and Juarez, Mexico; even in Antler, North Dakota, population 27. Some of the demonstrations were boisterous, others were quiet.

Five people were arrested outside an ICE office in Dallas for blocking a road. At least one arrest was made in Columbus, Ohio, when protesters obstructed a downtown street. Light-rail service temporarily shut down in Minneapolis as thousands of demonstrators got in the way of the tracks. A rally in Portland, Maine, grew so large that police had to shut down part of a major street.

But in Dodge City, Kansas, a 100-person rally led by a Catholic church felt more like a mass than a protest.

In rural Marshalltown, Iowa, about 125 people gathered for a march organized by Steve Adelmund, a father of two who was inspired after turning on the news on Father's Day and seeing children being separated from their families and held in cages.

"If we can't come together under the idea of 'Kids shouldn't be taken from their parents,' where are we?" he asked. "We have to speak out now while we can, before we can't."

Drum beats and horns sounded as thousands of protesters took to the streets of San Francisco.

"We came here to let the president know that this is not acceptable," said San Francisco resident Barry Hooper, who attended with his wife and two daughters.

His 7-year-old daughter Liliana clutched a sign she made, saying, "Stop the separation."

Three thousand miles away in Washington, protesters ended their march at the white-columned Justice Department. They stacked their protest signs, written in English and Spanish, against its grand wooden doors.