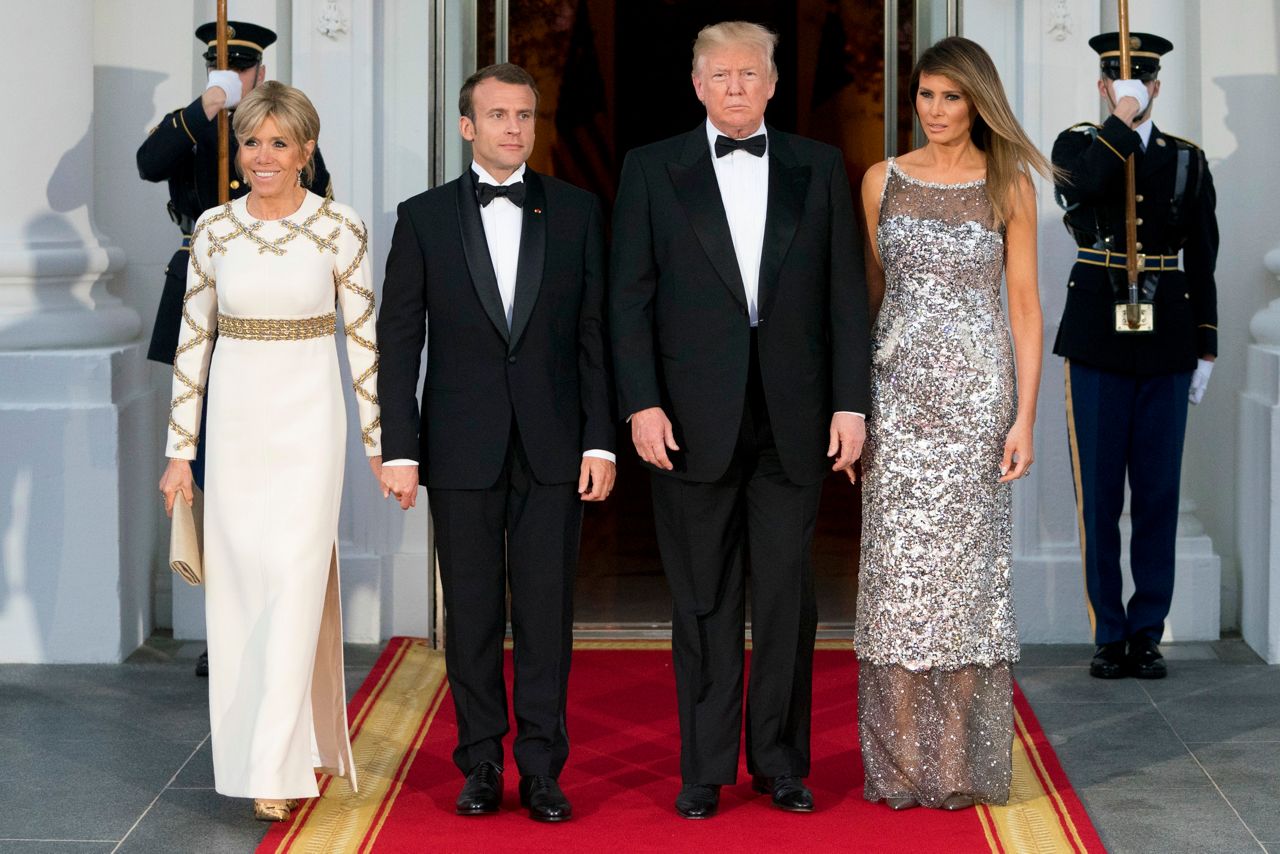 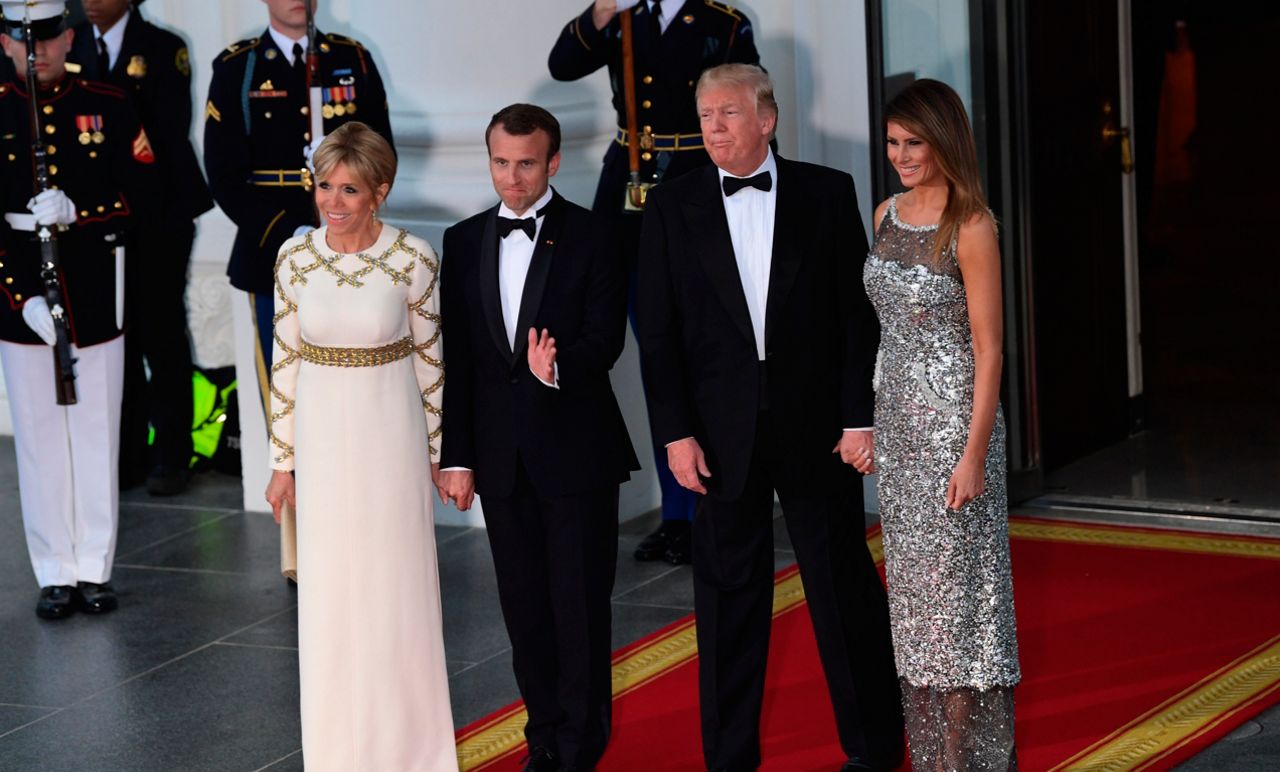 2 of 21
President Donald Trump and first lady Melania Trump pose for a photo with French President Emmanuel Macron and his wife Brigitte Macron as they arrive for a State Dinner at the White House in Washington, Tuesday, April 24, 2018. (AP Photo/Susan Walsh) 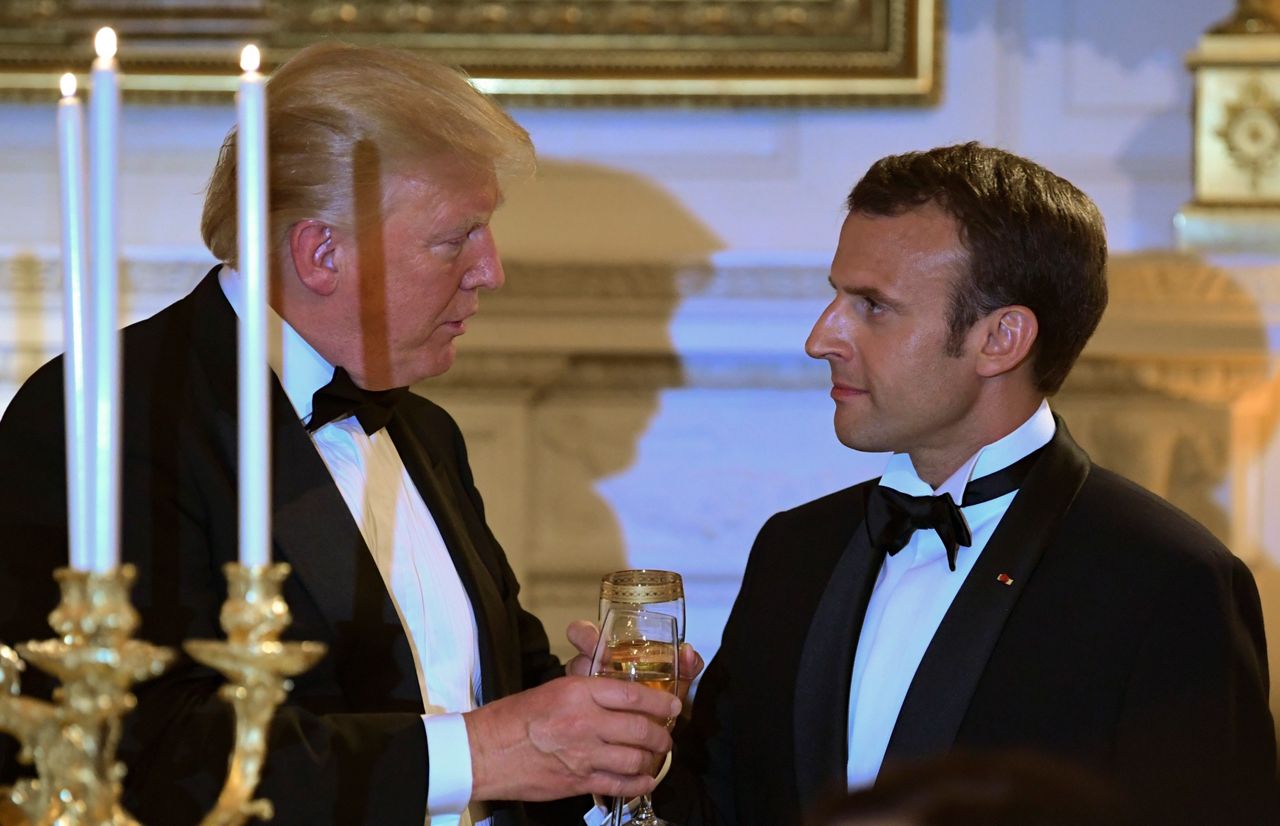 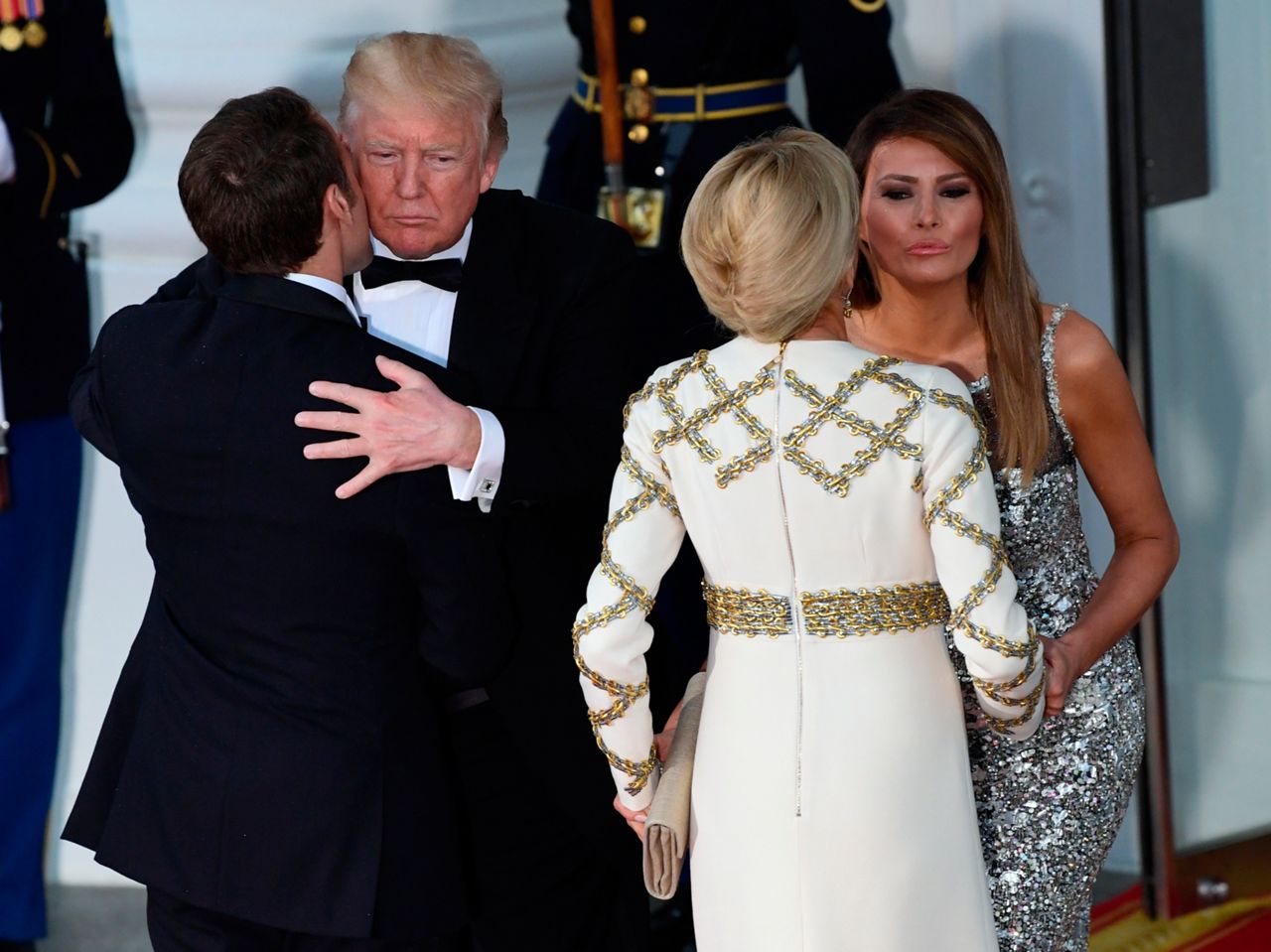 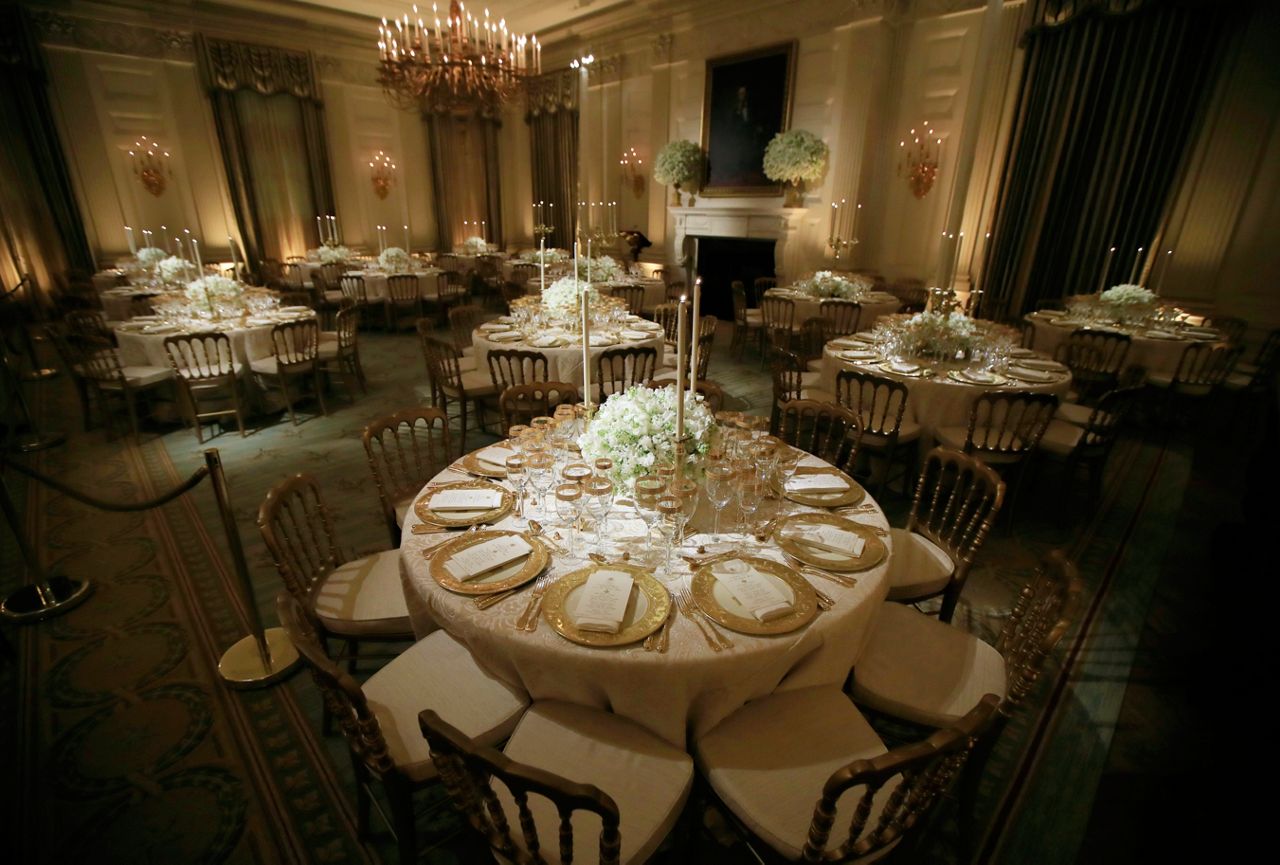 5 of 21
The State Dining Room at the White House is set for the first State Dinner that President Donald Trump will host as president with French President Emmanuel Macron in Washington, Monday, April 23, 2018. The State Dinner will be held on April 24. (AP Photo/Manuel Balce Ceneta) 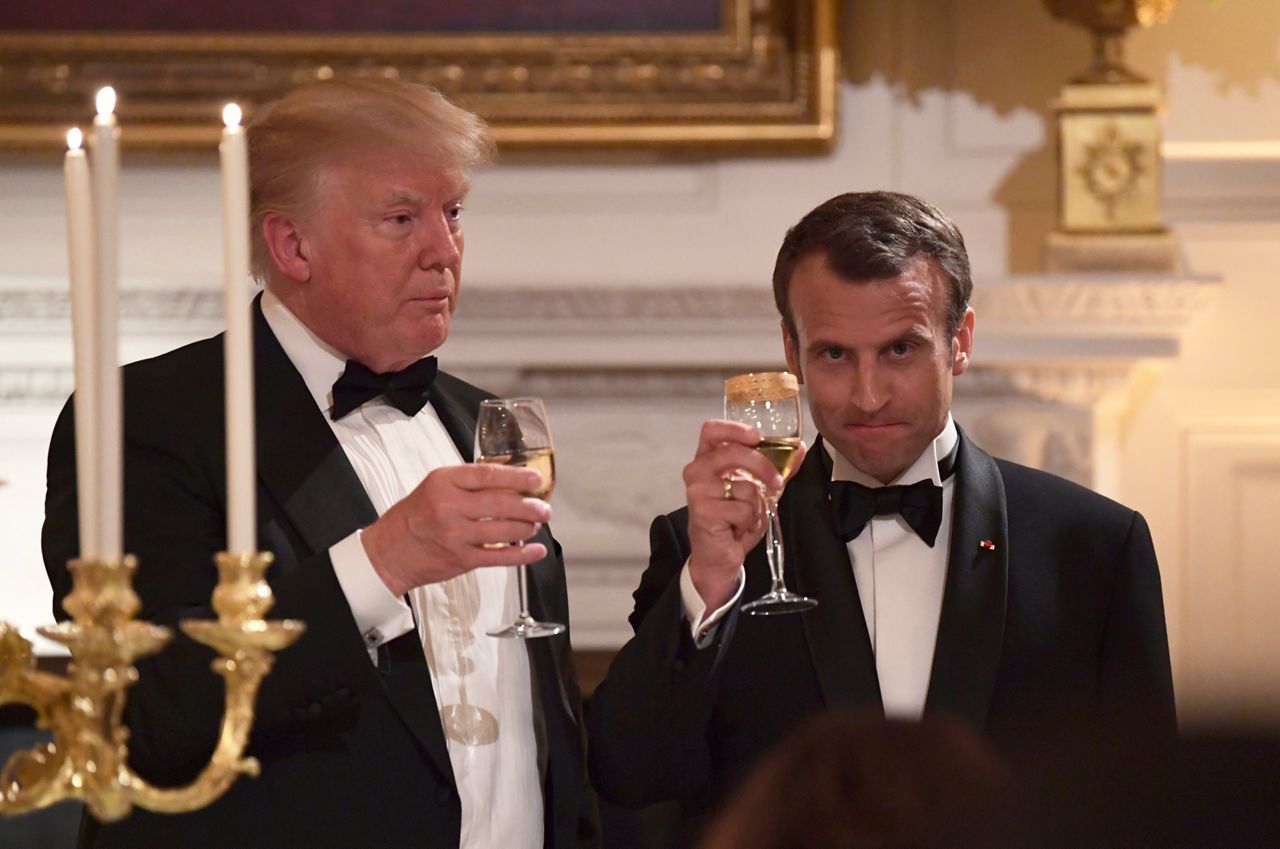 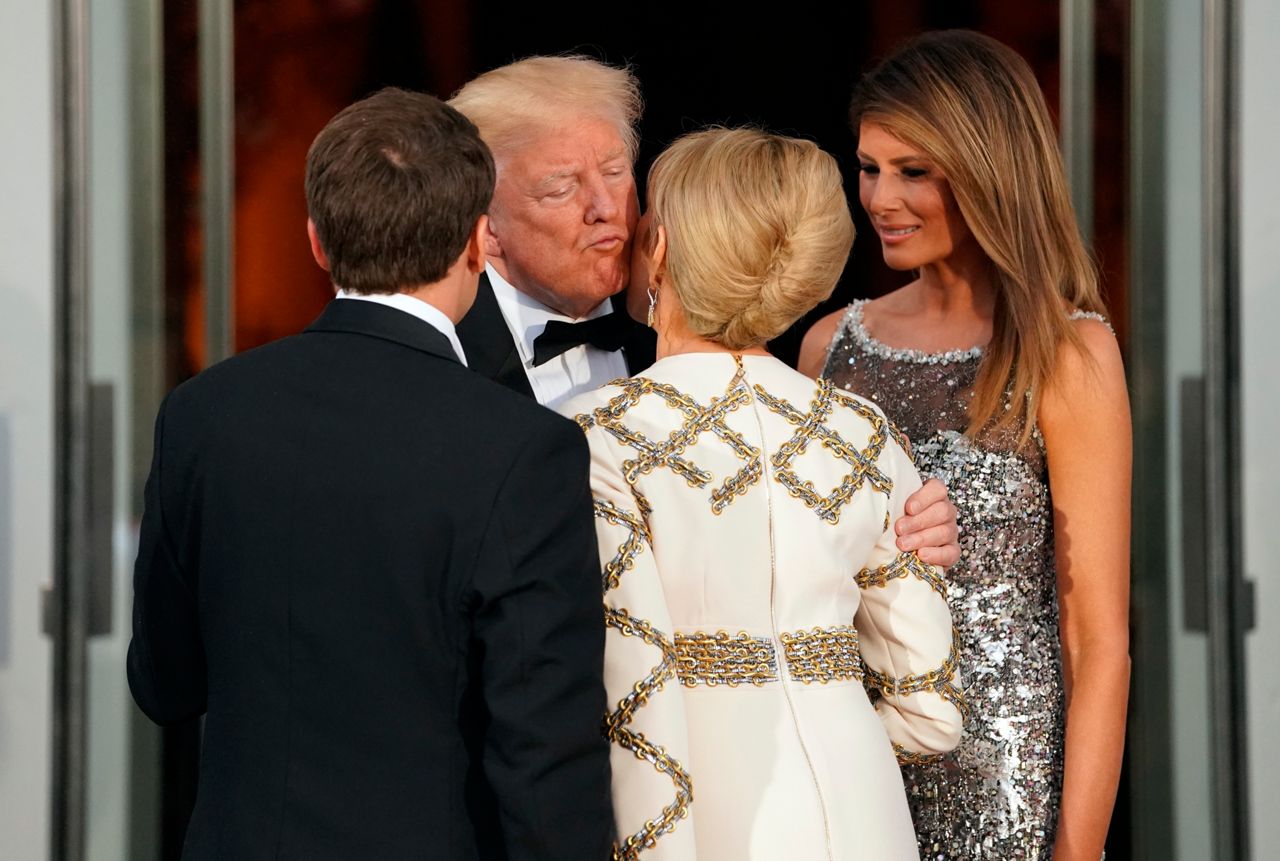 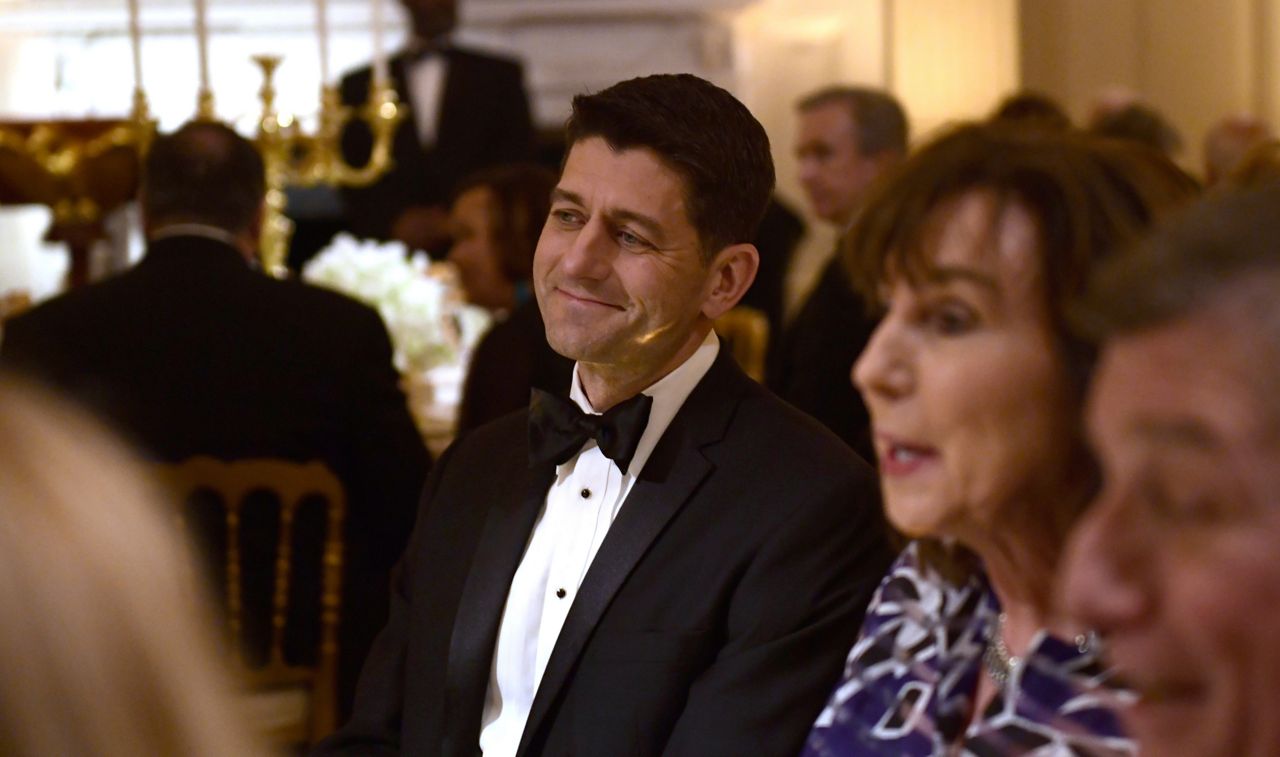 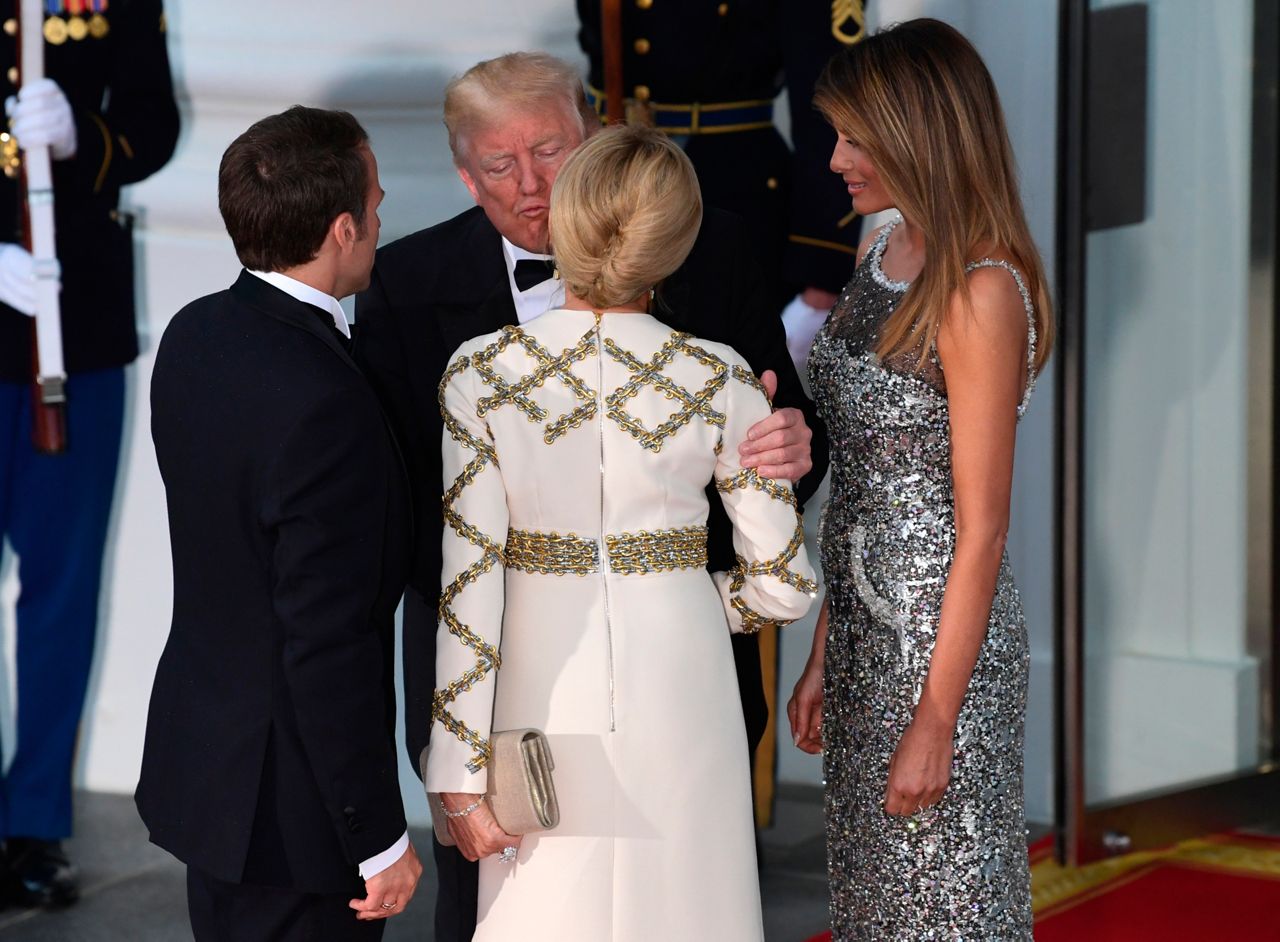 9 of 21
President Donald Trump and first lady Melania Trump wait to greet French President Emmanuel Macron and his wife Brigitte Macron as they arrive for a State Dinner at the White House in Washington, Tuesday, April 24, 2018. (AP Photo/Susan Walsh) 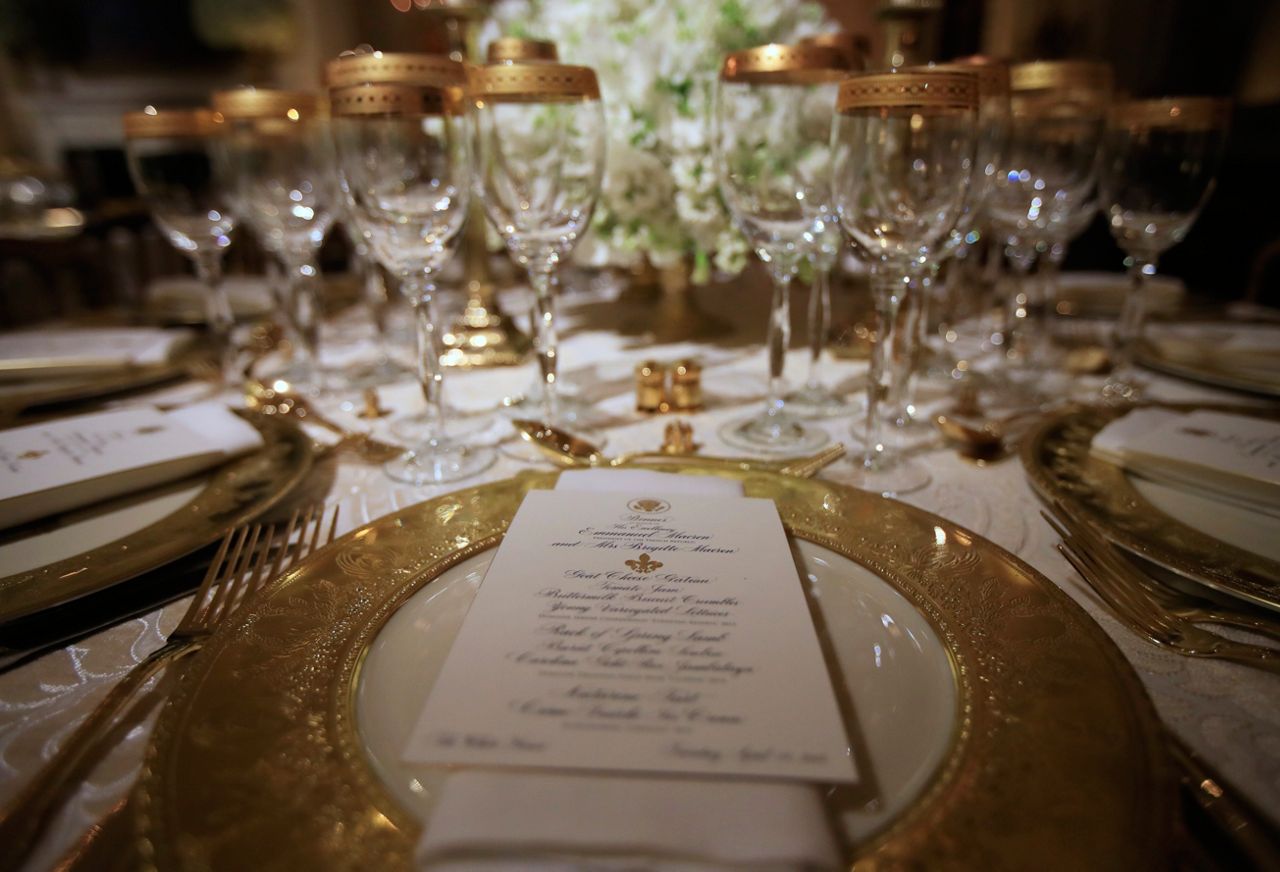 10 of 21
The State Dining Room at the White House is set for the first State Dinner that President Donald Trump will host as president with French President Emmanuel Macron in Washington, Monday, April 23, 2018. The State Dinner will be held on April 24. (AP Photo/Manuel Balce Ceneta) 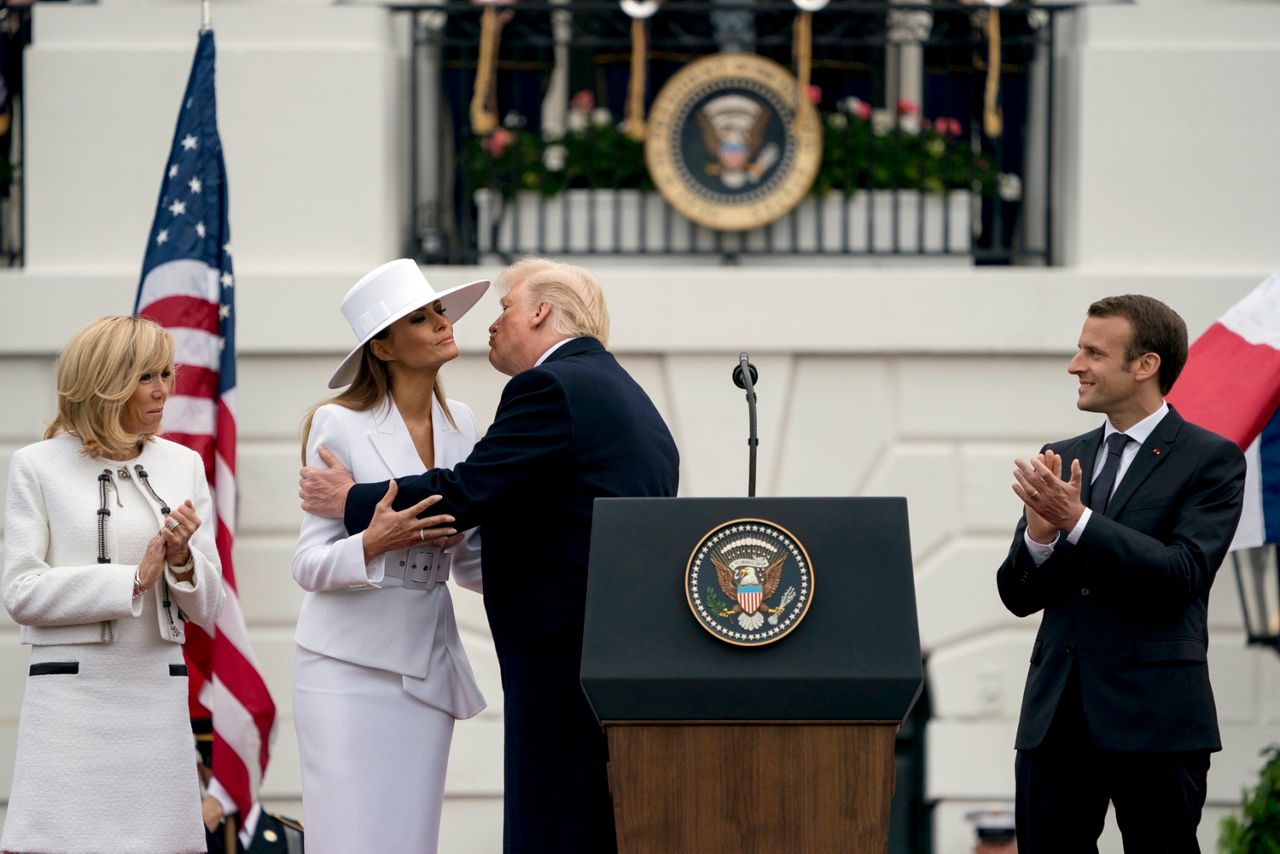 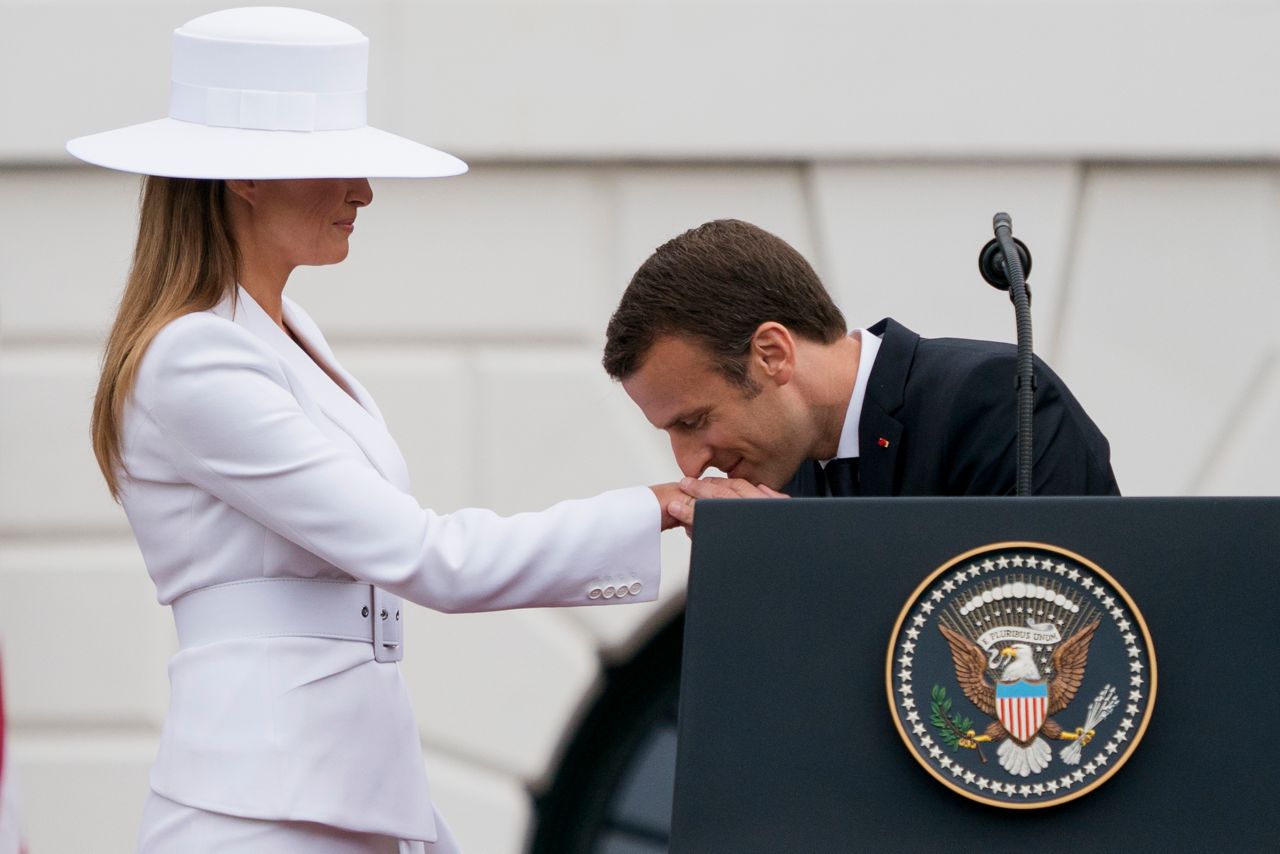 12 of 21
French President Emmanuel Macron kisses the hand of first lady Melania Trump during a State Arrival Ceremony on the South Lawn of the White House in Washington, Tuesday, April 24, 2018. (AP Photo/Andrew Harnik) 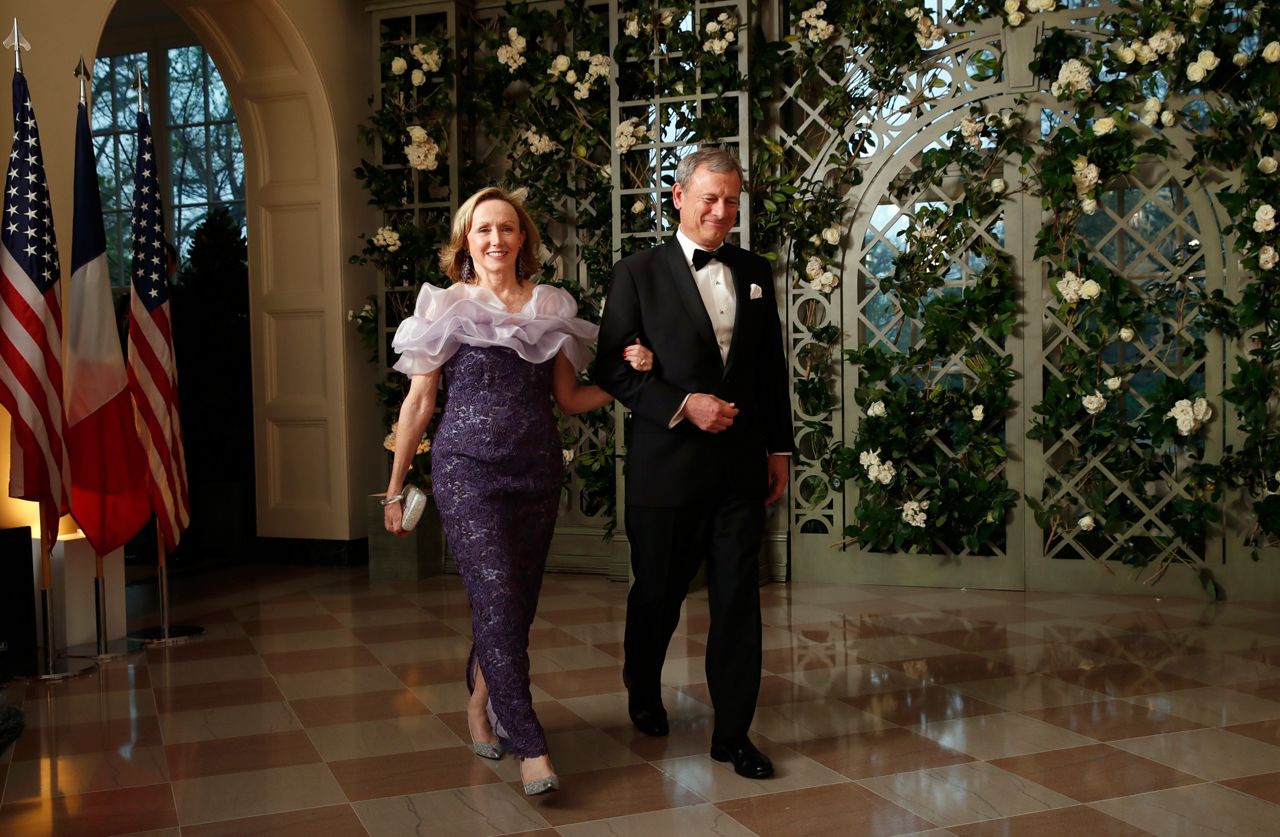 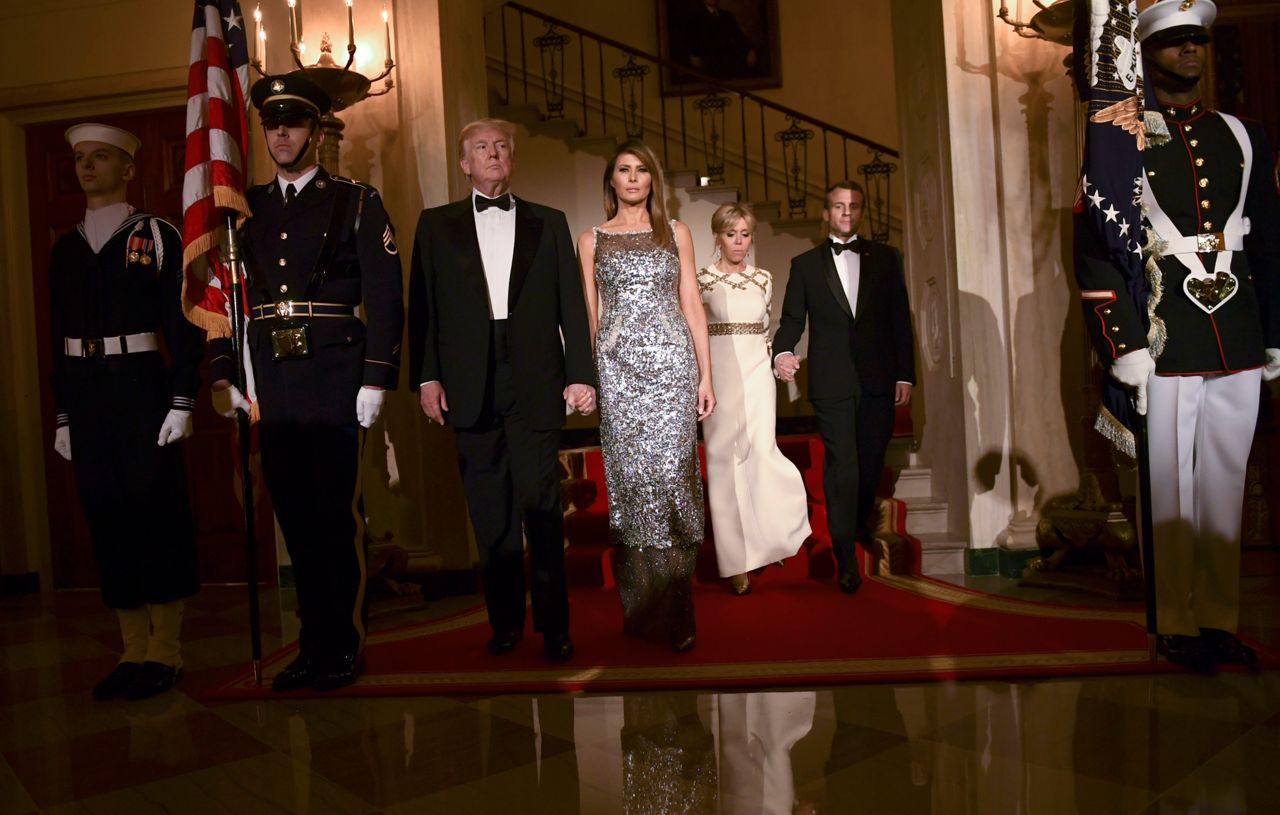 15 of 21
President Donald Trump, first lady Melania Trump, Brigitte Macron, and French President Emmanuel Macron walk down the Grand Staircase to pose for a photo in Grand Foyer before a State Dinner at the White House in Washington, Tuesday, April 24, 2018. (AP Photo/Susan Walsh) 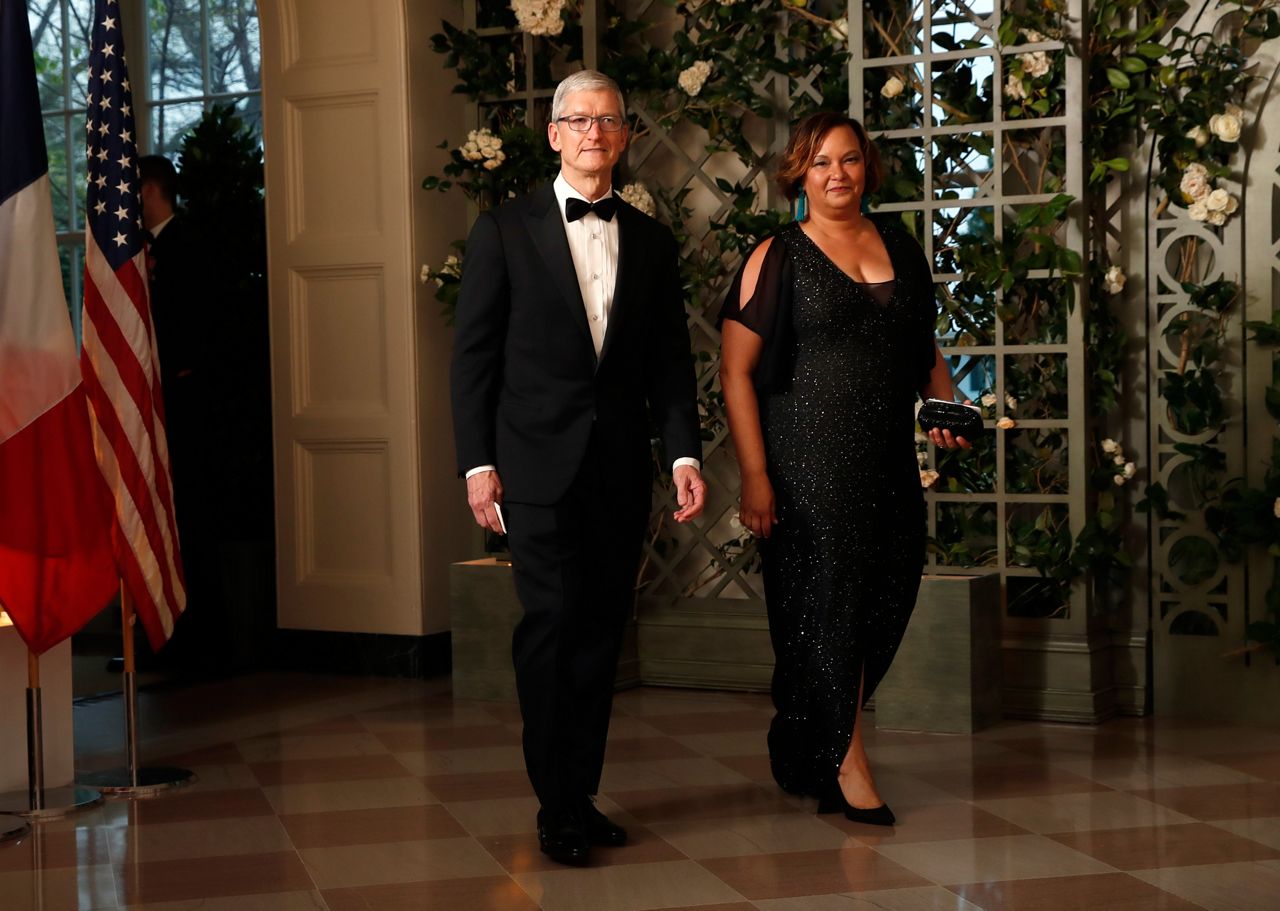 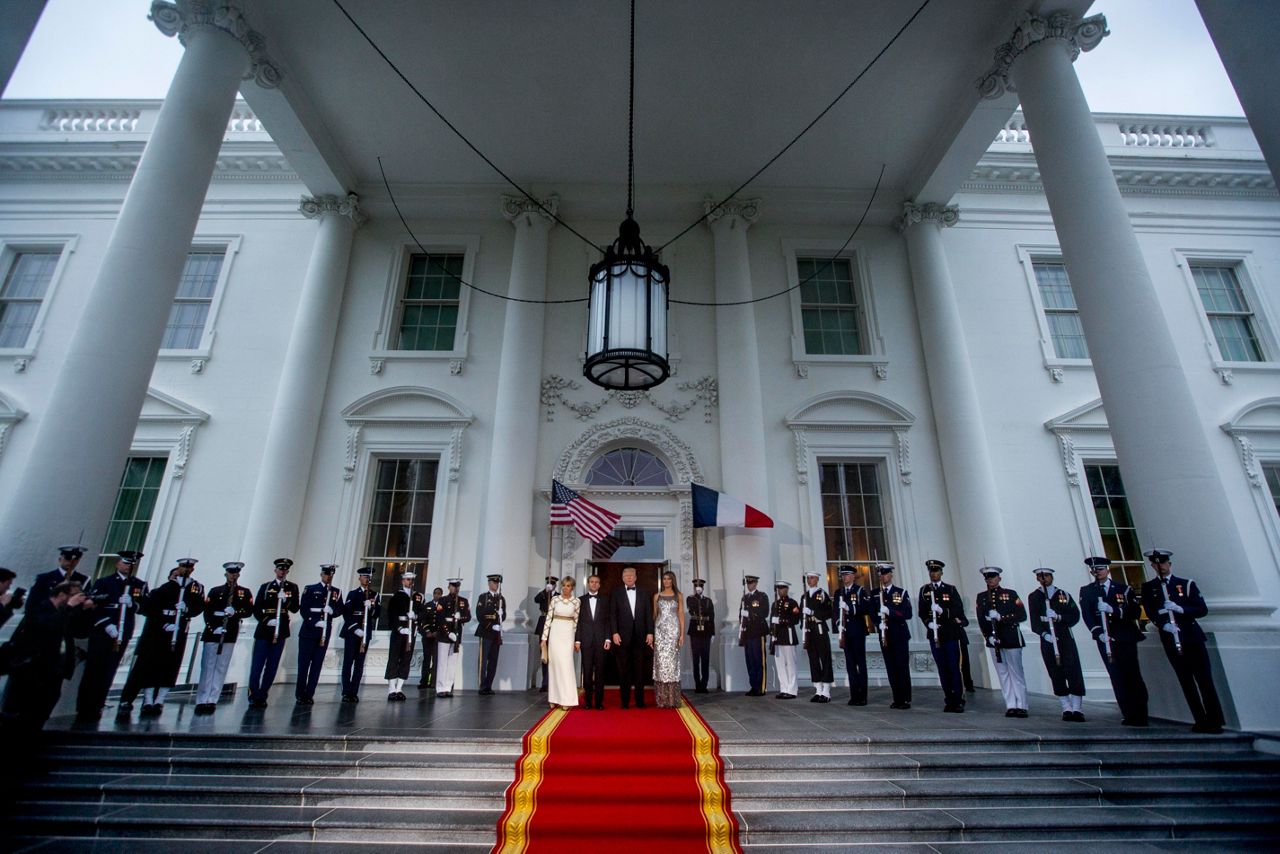 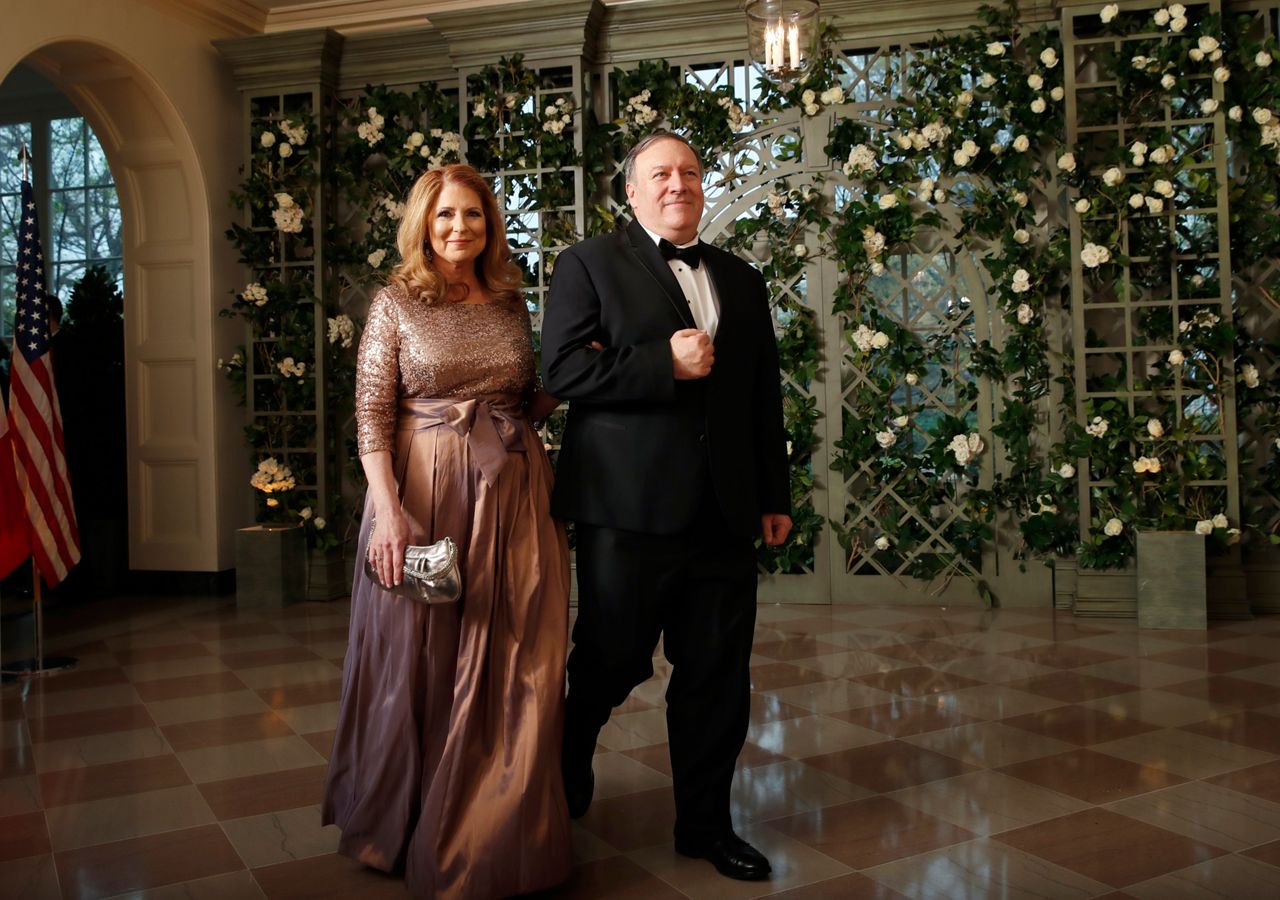 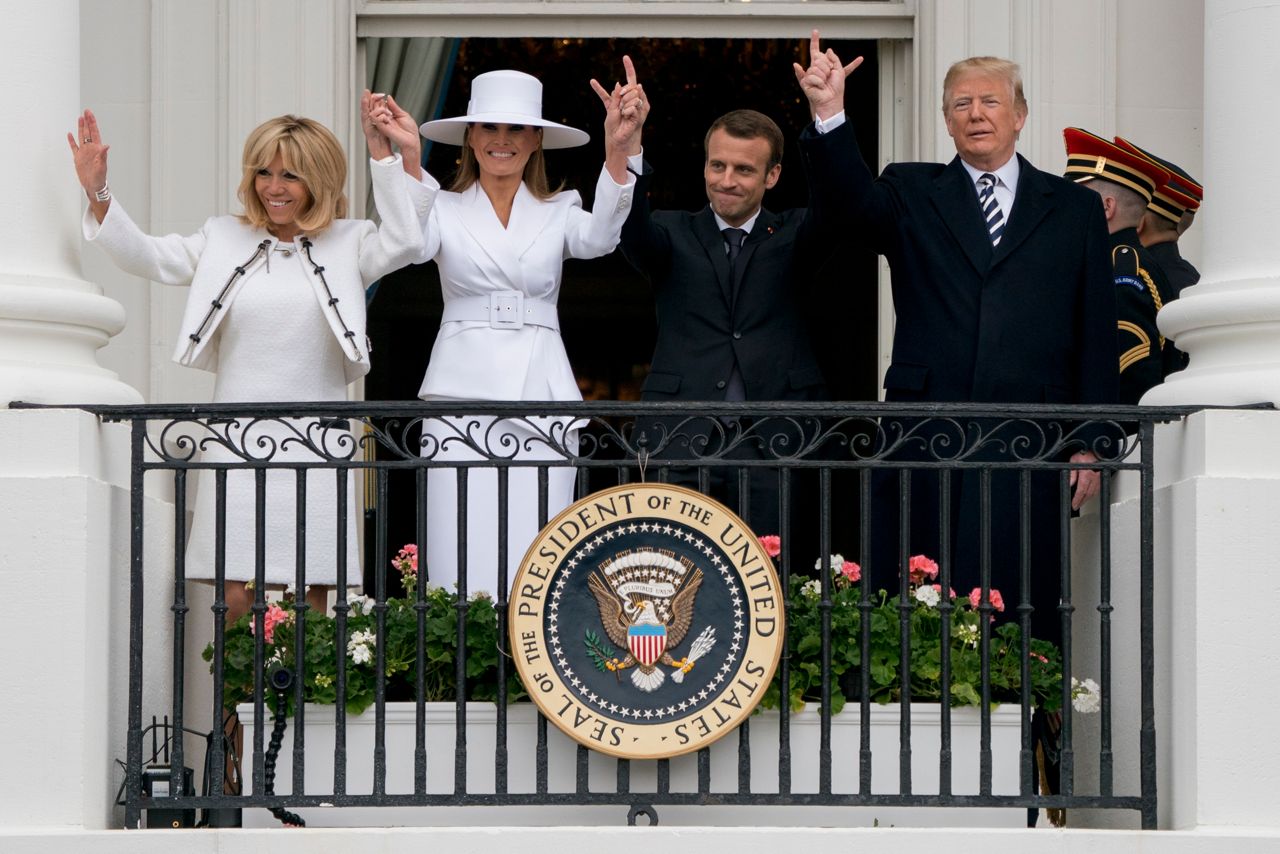 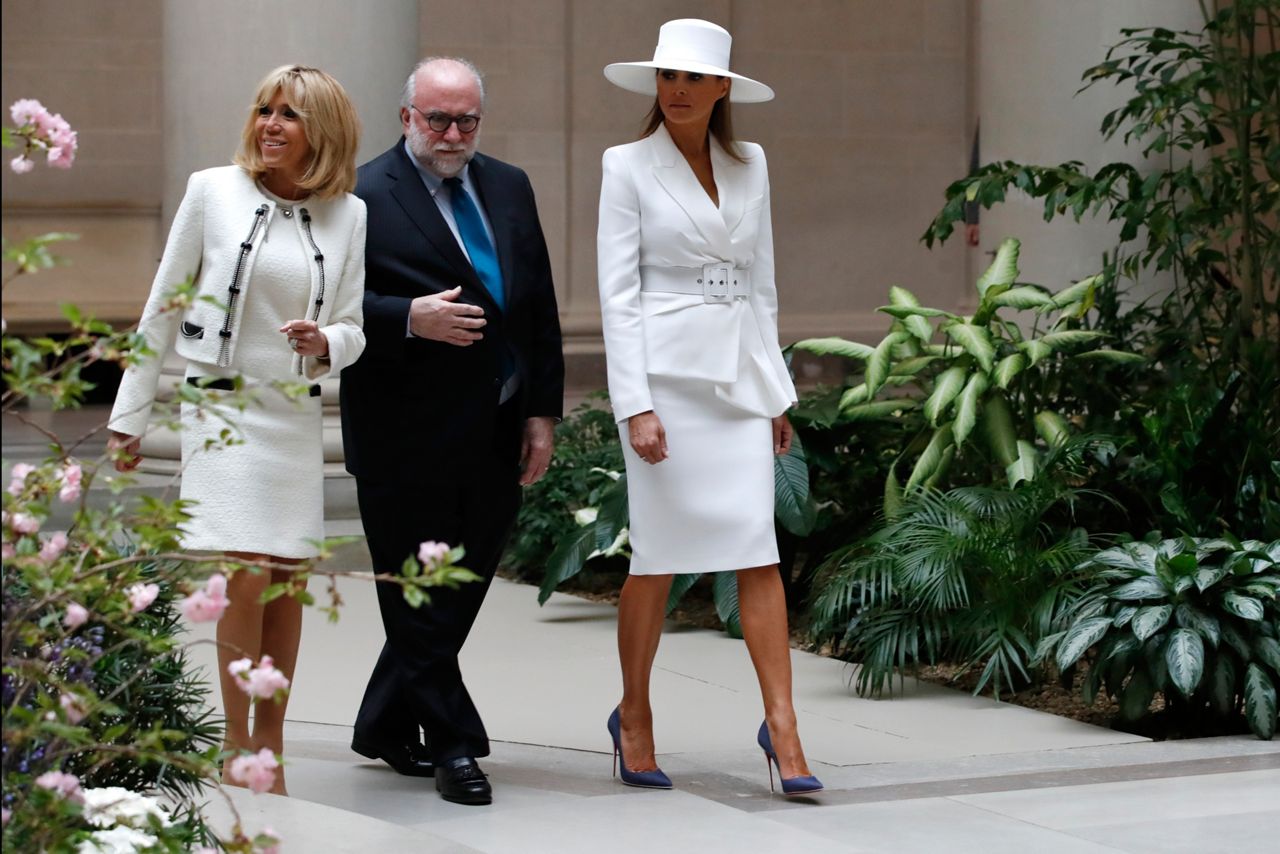 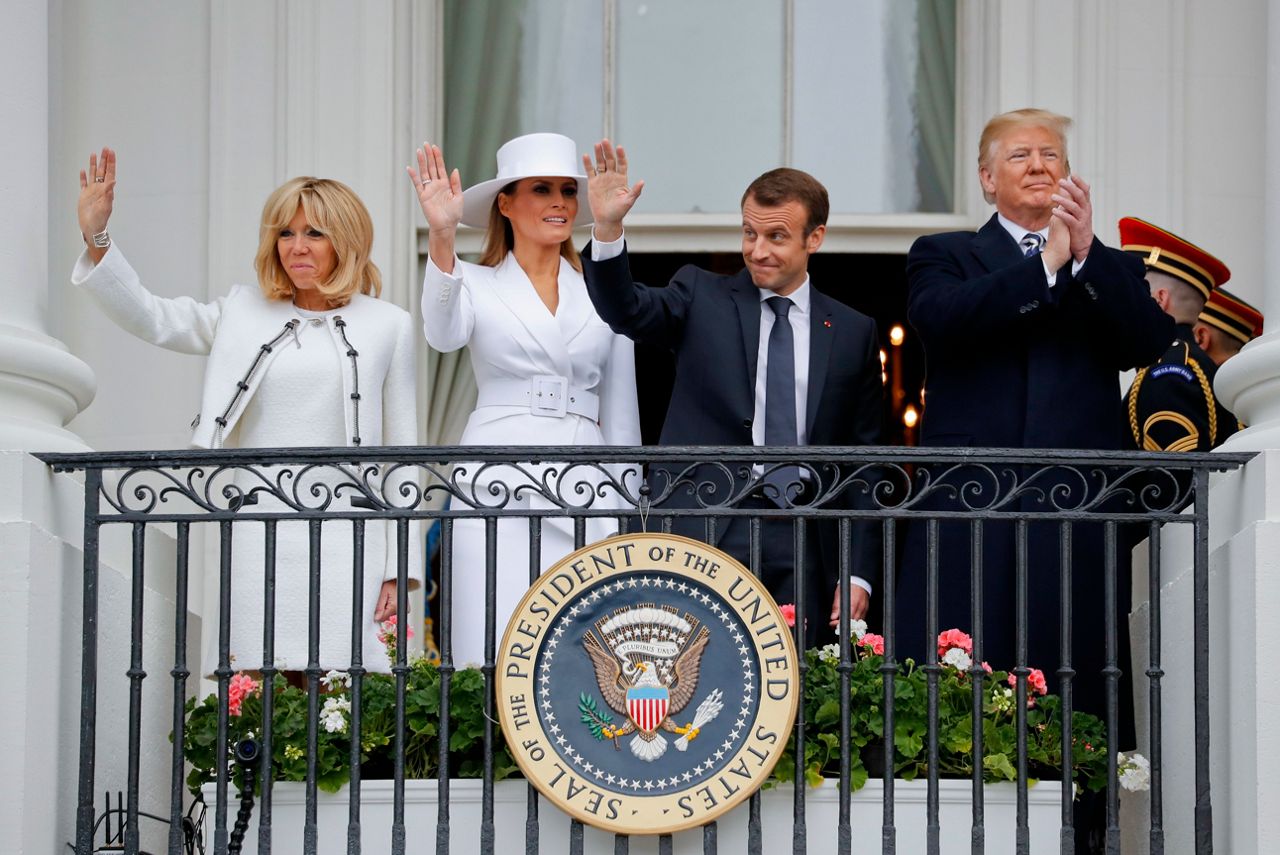 Melania Trump takes her moment to sparkle in the spotlight

WASHINGTON (AP) — There were no celebrity guests, Hollywood entertainers or superstar chefs. But as she stepped out of the background to host her first state dinner, Melania Trump sought to sparkle in her moment in the spotlight.

After ditching her trademark dark sunglasses for a white skirt suit and hat earlier Tuesday, the first lady appeared in a Chanel gown to greet President Emmanuel Macron of France and his wife, Brigitte, as they arrived for the first state dinner of Trump's administration.

With the opulent affair, Mrs. Trump seemed to be aiming to make a statement, stressing her personal involvement in picking the menu and gold-trimmed table settings. In a nod to France, she wore a black Chantilly lace Chanel haute couture gown, hand-painted with silver and embroidered with crystal and sequins, according to her spokeswoman. Her French counterpart wore Louis Vuitton.

On Wednesday, Trump praised the "spectacular job" he said his wife did on the event.

"Every detail was done to perfection," he tweeted. "The State Dining Room never looked more beautiful, and Washington is abuzz over what an incredible job Melania did." In his dinner toast Tuesday night, Trump declared his wife "America's absolutely incredible first lady."

In the toast, the president also hailed the bonds between the United States and France, saying: "May our friendship grow even deeper, may our kinship grow even stronger and may our sacred liberty never die."

With 123 attendees, the event was smaller and more intimate than President Barack Obama's dinners. Among those attending were Vice President Mike Pence, Chief Justice John Roberts, former Secretary of State Henry Kissinger and two Winter Olympians, who flashed their gold medals on their way into the pre-dinner reception.

Guests at Trump's table included Apple CEO Tim Cook and CIA Director Mike Pompeo, the president's nominee for secretary of state, as well as Macron and his wife.

In his toast, Macron talked about the countries' "unbreakable friendship" and referenced both his and Trump's rapid political ascents, saying: "On both sides of the ocean some two years ago, very few would have bet on us being here together today."

While Ivanka Trump, a senior White House adviser and the president's elder daughter, and Louise Linton, the wife of Treasury Secretary Steven Mnuchin, wowed in designer gowns, there were no surprise celebrity guests, in contrast with past years.

Asked what she was looking forward to, Linton said: "Everything French!"

The White House stressed that Mrs. Trump, who planned her 2005 wedding, had a hand in every aspect of the social denouement of Macron's visit. She released a brief video showing her working on the details with her staff, including the menu and the table settings.

The guests, seated at round candle-lit tables decorated with bouquets of white flowers, dined on rack of lamb and nectarine tart served on a mix of china settings from the presidencies of Bill Clinton and George W. Bush. After-dinner entertainment was courtesy of the Washington National Opera.

Trump's Cabinet was well-represented at the dinner. Commerce Secretary Wilbur Ross, Secretary of Defense Jim Mattis and Homeland Security Secretary Kirstjen Nielsen were there, along with Mnuchin and Trump's new national security adviser, John Bolton, and new top economic adviser Larry Kudlow. Others were absent, including Environmental Protection Agency Administrator Scott Pruitt, who has been under scrutiny over ethical questions.

Earlier Tuesday, Mrs. Trump wore a stylish belted suit with a broad-brimmed chapeau for her public appearances, including on a brief outing to the National Gallery of Art with Mrs. Macron to view an exhibit of works by French painter Paul Cezanne.

The hat stayed put as she returned to the White House and took her front-row seat in the East Room for the president's joint news conference with Macron. It bobbed up and down across the bottom of television screens as she entered the room and again as she rose to leave, spawning many a Twitter meme.

The hat was designed by Herve Pierre and the skirt suit was by Michael Kors.